Arriving to pick up my packet at my first Pete Sanfilippo Holiday Run was the undoubtedly the most tragic and shocking circumstance I have ever encountered immediately before a race.

The volunteers were frantic and disorganized, and the race director, Pete Sanfilippo, was conspicuously absent. Upon receiving my racing bib, I had to ask what was going on.

"He passed away last night," I was told.

I felt a coldness as this information registered with me. On the eve of the final race of the year, the Mid-Hudson Valley running community had lost one of its most invaluable contributors who had overseen this race and countless others over a decades-long career as director. It was Pete who first enticed the race's most prolific former champion to compete, heralding what would ultimately become a national record for most times an individual has won the same road race: Mike Slinksey, a 2000 U.S. Olympic Marathon Trials qualifier who had notched over 20 wins total. It would have been virtually impossible to run any of the annual races held by the Mid-Hudson Valley Road Runners and NOT know who he was. Another piece of common knowledge for the area was the fact that road racing would hit a hard stop after that final race the first weekend in December, not truly starting up anywhere in the Mid-Hudson region again until early spring / very late winter. In college, in both indoor and outdoor track, when it would get to be the end of the season some campuses would hold "last chance" events which an athlete could utilize as a final attempt to qualify for championship meets. The Mid-Hudson Valley does not have any end-of-season championship events in its road race circuit, but that same premise of a "last chance" event was still applicable to me at least. Whoever else was in the race, even if it meant me just racing against myself for 5 miles straight, this was my last chance to prove whatever I wanted to prove before I would reluctantly take a break from racing for the next several months. In 2018 I surprised myself here: After spending my entire college cross country career trying to break the 26 minute barrier in the 5-mile (then several more years after that on my own) I finally *FINALLY* broke 26 minutes, running a 25:58 at the Pete Sanfilippo Holiday Run. That was just one of countless fantastic racing memories I have made in the region. Even having moved away from the Mid-Hudson region, the races have had a tendency of drawing me back. I will often find myself pulling out any one of a number of excuses to sign up. That one is right along the river and has some great views. This one is right near a great distillery. I really bombed the last time I ran that one; certainly, if I ran it again, I could do much better. The excuse this last time was the fact that I was unsatisfied with my performance in the Troy Turkey Trot 10k and wanted one more race attempt before I hung it up until February 2023.

The forecast shifted the week of the race and now called for a 100% chance of rain. I braced myself for rain and wind and the strong possibility I might regret adding this one last race. As he had been for so many years in the past, Mike Slinksey was again in attendance, now a seasoned master’s runner and coach. I told him about how I had improved my marathon personal best dramatically this year but felt as though I still have much more potential.

"I ran 140 miles a week AVERAGE," he said, discussing the training which shaped him into an elite-level competitor, "I trained hard every week, I didn't have training blocks. You get to a point where you're tired of just being good and you want to be GREAT."

I hesitated, then ventured to ask a follow-up question, "What about family and other social obligations? Were you ever worried you would miss something?"

He smiled, "They wait for me. I never missed a run or a workout."

I waited under an awning to try to stay as warm as possible out of the rain before the race got started. This wouldn't be the worst ever. It would not be the Electric City 5 Mile running in a blizzard, or Boston in 2018, which resulted in being treated (twice) for hypothermia. This cold and this rain was "no excuses" weather, especially for December. After approximately 100 meters of running, I was leading and alone, pursuing a pace car through the rainy windy roads of Wappingers Falls. I imagined there were footsteps just behind me, chasing me down. Someone I had not seen at the starting line confidently riding on my coattails, ready to surge up alongside and past me at the slightest sign of weakness. The wind and rain would have made it impossible to know. The next person behind me could be 5 seconds or a mile back and I would be none the wiser; and never ever under any circumstances would I look behind myself during a race. Still, with a little less than a mile remaining in the race, I felt particularly strong. If I had been the pursuer with someone just ahead of me, they would have needed to be ready for a four mile run followed by a one mile race. Moreover, this would not be a race where I would collapse across the finish in a heap, despite the fact that running this race in general was an act of wringing the final remaining hard effort out of myself, like a toothpaste tube with just one more tiny bit of paste. I knew in that moment there was nobody else I was competing with but myself, surging up the final two hills of the race and barreling onward back into the blink-and-you-miss-it town center of Wappingers Falls.

There was no way I could have known at the time that apparently my primary competition was a high school student dressed in a full-body reindeer costume who finished nearly six minutes behind me, even after I had taken a wrong turn near the finish, a scenario which speaks perfectly to how prestigious of a race this was. Long gone were the days when it was being won by an Olympic Trials qualifier who could run two consecutive sub-1:09 half-marathons combined. It was still fun. It was still a great route, which finds its way to meandering alongside the creek and both starts and finishes near the town's most spectacular natural feature: a high gorge of jagged stone which is the "falls" referenced in the town's name. I have run it three times now and plan to do so again in the future. Without any of glitz and glamour that accompanies some of the bigger end-of-the-year races, where you might feel as though you are out for a hard run on your own through the streets any old upstate New York village, if you are anything like myself, your thoughts turn to what brought you there. And in ruminating on that idea, all became very clear. The first place finisher award was different from the others: it bore a picture of Pete Sanfilippo, the namesake of the race who had passed just before my first time competing, who had directed it for decades before his son would go on to carry the torch in his father's honor. There are definitely times when a person can get swept up into thinking that competing is everything - sports in general have a way of doing that - but there are undoubtedly things that are more important. I love the local running community, and so it was a marvelous thing to be able to compete in a race which recognizes a person who did so much for theirs. Am I going to deprioritize time with my friends and family for the sake of racing and training? No, absolutely not. But if my body and my schedule permit, it is absolutely a race I want to run again - as a "last chance" end-of-the-year race for myself, as a courtesy nod to the late race director, and in an effort to assert competitive dominance over anyone racing in a reindeer costume. 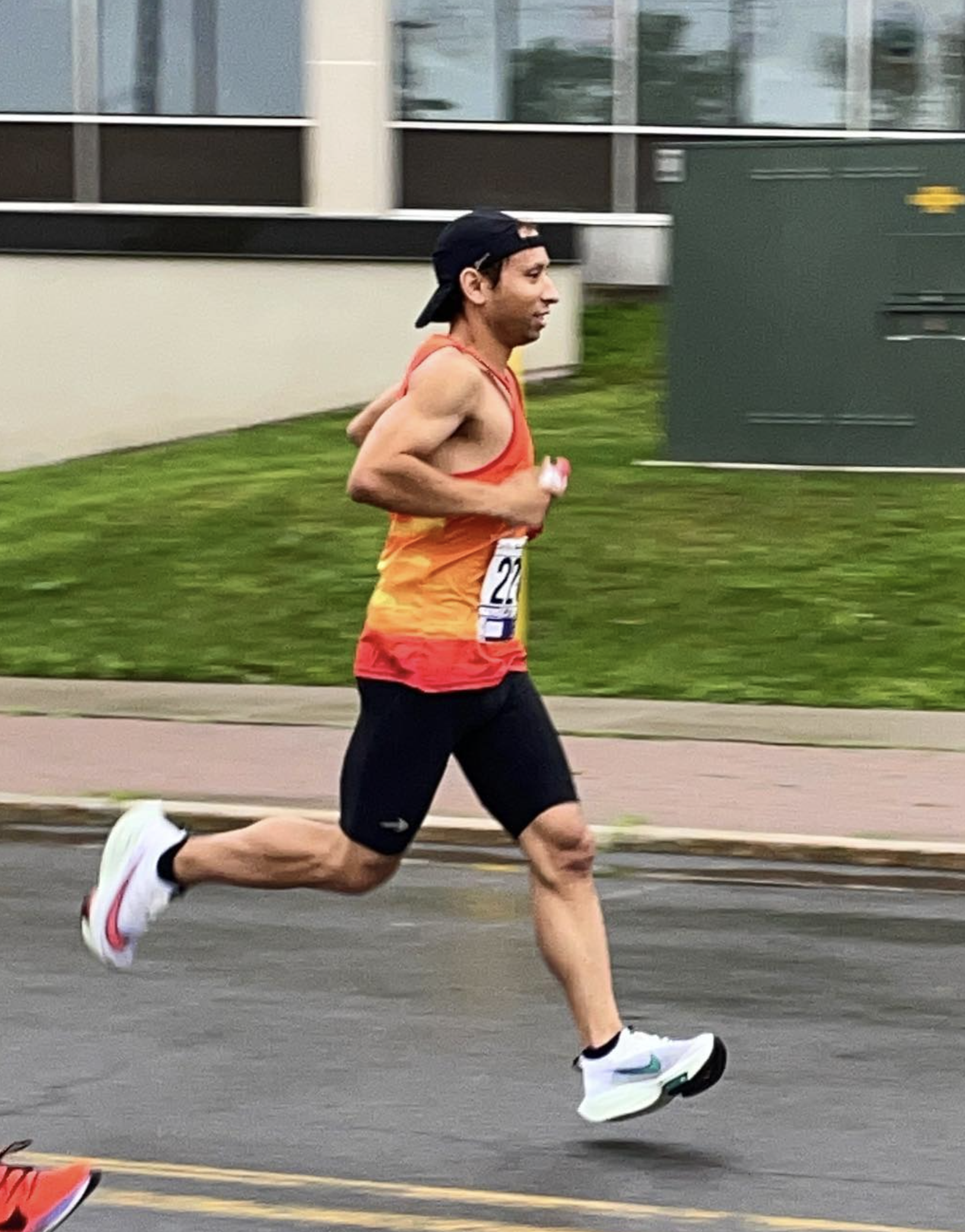 Jon is one of our elite runners and a prolific writer of articles for the Pace Setter.  Jon loves to travel to new sites to run races and can happily tell you about the races’ highlights and the craft beers they serve.