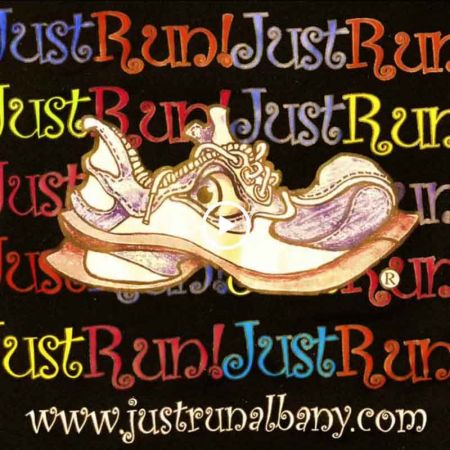 Click on picture below for awesome video of the 2022 Just Run XC program by Bill Meehan.

The idea of a club program offered to youth as a way of the club’s giving back to the community started back in 2009 when the club’s Ad Hoc Long Range Planning Committee (members included Ray Newkirk, Ed Neiles, Cathy Sliwinski and Marcia Adams among possible other club members) was asked by the club membership to look into a program geared to youth. At a membership meeting that fall, the committee asked the membership to support a pilot program in the Capital Region based on the national program, based in Monterey, California, called Just Run which was started in 2005 by the Big Sur International Marathon. Big Sur described Just Run: “This website-based program promotes physical activity and healthy lifestyles in schools and youth organizations throughout the United States.” The program has an excellent website which most school leaders have used in planning their school-based Just Run activities.

The membership approved a piloting of the program using two youth programs, one based in a suburban location and one based in an urban location: Sand Creek Middle School located in Colonie and Trinity Institution’s (currently called the Trinity Alliance) after school program based in the South End of Albany. The pilots were started in the Spring of 2010 concluding shortly before the end of that school year. The Long Range Planning Committee met both during the pilot with the program leaders at both sites and at the end. To make a long story shorter, the committee recommended to the club membership that the pilot was successful and that the club should continue the program by developing a formal relationship with the national Just Run program. The membership approved, gave the go-ahead for the expansion and approved a budget for such expansion. Club member Ken Skinner accepted the volunteer position of Just Run program administrator in the fall of 2010 and set off to visit elementary schools in the Capital Region to recruit participants to join a Spring, 2011 Just Run program. Initially, Ken focused on enlisting urban and rural elementary school as the thought was that those schools had less after school opportunities in which to participate than suburban elementary schools. Eleven elementary schools signed up, more than we anticipated. About 550 students participated and 200+ of them came to an end of year Just Run track meet hosted by Union College. Six schools were urban, three were suburban and two were rural. At the beginning of the following 2012-13 school year, HMRRC president John Parisella signed a formal document with the Big Sur International Marathon in which “JUST RUN Albany, NY is a licensed satellite program of the Big Sur International Marathon JUST RUN program based in Monterey, California”. At the time, our Just Run program was the first satellite program on the East Coast. Currently, we are a chapter of the national program and called the Capital Region Just Run Program. We may be one of only four satellite chapters in the United States.

After the conclusion of the 2011 spring program, the school leaders were so enthused about the program that they asked if the program could be expanded to a short fall cross country program. It was agreed and about half of the spring 2011 schools participated in a cross country program hosted by Towasentha Park. The concluding cross country event was held the week before Thanksgiving with temperatures running in the mid 30 degrees! The fall cross country program has continued but ending now before Daylight Savings Time ends and the temperatures are much more comfortable. The spring, 2012 program now included about 15 schools and again concluded with a track meet. After that school year, we had to find a new location for the track meet as the number of spectators and their cars outgrew what Union could accommodate as well as a 6 lane track for the athletes. We moved to the 8 lane track at Guilderland high school, stayed at the Towasentha Park for the cross country program staying at both locations until the spring and fall 2022 when both programs were moved to Mohonason high school.

By 2014, schools were asking about participating in our Just Run program (they heard about us through word of mouth, no advertising or outreach on our part). The number of schools participating in the spring program grew to twenty-four. In the spring of 2019 and fall of 2019, the program topped out at about 25 schools in the fall program (two cross country meets) and a little over 30 schools in the spring program (the number of student participants that spring reached just under 2,000 and we had to have two days of track meets). Most of the schools come back each year. Leaders within the school are essential to making the experience a positive one for the kids and it requires a lot of energy. If a leader cannot support or cannot be found to support the time commitment, the school unfortunately will no longer participate. We try to correct this whenever possible.

Then COVID hit. We were planning on holding a spring 2020 Just Run program when most schools shut down that March. COVID kept many after school programs shut down that fall and into the following Spring of 2021. Things slowly opened back up in the schools during the 2021-22 school year and after school activities began to return. Due to the growth of the Capital Region Just Run program during the years 2016-2019, the club’s Just Run budget grew from $36K to $40K with no outside sponsor supporting all or part of program expenses. The HMRRC funded the program through revenues produced by the four major races the club conducts each year- Work Force Team Challenge, the fall marathon and half marathon and the Stockade-athon. During COVID, these races were basically shut down or drastically reduced and conducted virtually so there was really no financial support for continuing Just Run. The club’s Board of Directors, in the winter of 2021 said that we needed to find a prime sponsor in order to continue the program during the 2021-22 school year and beyond. Two key Just Run volunteers, Anne Hurley and Pete Newkirk, helped the club locate a foundation that might be helpful. A Power Point presentation about Just Run was put together and presented to a representative of the foundation’s board of directors. A few months later the club heard back from the foundation’s representative that the foundation board agreed to award the program a grant of $35K to fund the program for the 2021-22 school year. The foundation asked not to be named in any publicity regarding the grant and the re-start of Just Run. The grant covered most of the expenses for that school year with a little left over to cover some of the expenses related to the fall Just Run program in the 2022-23 school year. The club’s board of directors wants Just Run to recruit a major sponsor or sponsors to support the program. The HMRRC Board of Directors believes that the Just Run Program is essential to creating a healthy community and encouraging running within it, a gift children can pursue throughout their lives. We are looking for a sponsor to share the love.