Q&A with Tom O’Grady Re: Children’s Book Mount Tremper Has a Temper Question: Where did the idea for the book come from?

For multiple years, on the fourth of July, I would run the annual Firecracker 4-mile road race in Saratoga Springs. In 2018, I became a summit steward for the Catskill fire towers through the Catskill Interpretative Center and NYS DEC. Then in 2019, I missed the Firecracker race due to a volunteer commitment where my family and I spent the fourth of July on Tremper Mountain. On that fourth of July the weather was very warm. When we arrived at the trail head no one seemed particularly excited to be there. Like so many things in life, the reality of the situation was not matching up to anyone’s expectations. As we hiked up to the summit, the situation seemed to be deteriorating as our kids were not happy to be on a mountain climbing on a hot day. After reaching the top and getting some lunch, things started to turn around. We were shaded by trees so the temperature was not as oppressive as we thought it would be and soon enough the kids were having fun. We greeted and talked to the few hikers that arrived at the summit and throughout the day we discussed all the great qualities that the mountain had.

At some point during our trip, I mentioned that “Mount Tremper had a temper at first and then gradually things got better”. It seemed like a good analogy for the day, so I wrote it down. The idea just kind of stuck in my head but I didn’t do anything with it for a while.

How did you go from idea to book?

While on a run one morning a week or two later I thought more about the comment about Mount Tremper having a Temper and the day we had. At first, I thought about all the reasons for Mount Tremper to have a temper. Then I thought about all reasons for Mountain Tremper to no longer have a temper. It seemed like there was a good story arc but that was it. I’m not entirely sure how I made the jump to a children’s book. I decided to write out the whole story after coming back from my run. After giving it some more thought it seemed like it could be a good book with the right illustrations. From there I didn’t think about it too much for a while until the fall when I thought more about trying to turn the project into a Children’s book. I gave a short overview of my idea to someone I knew well enough to give me an honest answer and asked what they thought. They encouraged me to build the idea out further and go for it. My next step was to find an illustrator. How did you find an illustrator?

That’s a good question and it took some time. Originally, I asked my Ph.D. advisor’s son who is a good artist. Unfortunately, he couldn’t help me because he had just started a new job after graduating from college and was working on a separate project. At this point it was late fall of 2019. I had other things going on, so I just tabled the idea for the time being. When the pandemic first hit in 2020, I didn’t think about it much at all until the summer 2020. Then while writing an article for ADK Sports and Fitness, I realized that the graphic designer, Karen Chapman, may be interested. I took a chance and reached out to Karen, and it turns out that in addition to doing graphic design she also enjoyed drawing. While Karen had never illustrated for a book, it was something that she had wanted to do for some time and this project would provide the opportunity. We were both excited to get started.

What was the next step?

Coming up with a plan to put the whole thing together. Karen and I sketched out a general timeline to get started and met regularly to make progress on the project. Gradually, Karen started creating some great sketches of the illustrations. By summer 2021 we started to have an actual book starting to come together. At this point I started to seriously investigate publishing options. It is hard to find publishers in today’s world. Saratoga Springs Publishing was recommended to us and after talking with the owner Vicki Addesso Dodd it seemed like a good fit. It was nice to find a local connection and Vicki was very informative. By early 2022 we were at the point where all the sketches were nearly final, and we had edited the story to where everything was almost final.

When was the book published?

The book was officially published in July 2022 three years after the original idea for it popped into my head. It was nice to see the book in print. I think Karen did a fantastic job with the illustrations and bringing the story to life.

What type of reaction have you received?

We have received a lot of great feedback so far. I have had friends send me messages that they bought the book and then they would send me pictures of their kids with the book or videos of them reading the book to their kids. Karen has had the same experience. That has been really rewarding to see.

Have you read the book to your children?

I have. My kids were really excited to see the book published. I told them about the project as I was working on it. So, it was nice to finally have a physical copy to share with them. Is Mount Tremper a good place for HMMRC members to trail run?

The Mount Tremper trail is a good place to go trail running. The path is not too rocky. There is a good amount of elevation gain but the trail is never overly steep at any one time. If you go between late spring and early fall, you should keep your eyes posted for rattlesnakes. Mount Tremper has timber rattlesnakes and I’ve seen them there before. There is a race, Manitou’s Revenge, that is a 54-mile ultramarathon and some of the final portions of the race are on Mount Tremper’s trail.

Does the book relate to running at all?

The theme of the book is perseverance. Things aren’t going well at first but then the situation begins to change and the story finishes on a high note. I think that is a message that resonates with a lot of runners in both their training and racing. Many people reach a low point in races like the marathon or in ultramarathons and after some perseverance end up finishing on a high note.

Where can we find the book?

So, tell us, is there another one coming?

Putting everything together was a lot of work, but I do have a few ideas for additional books. I think writing a second would be a more streamlined process and I am hoping to get another one out. 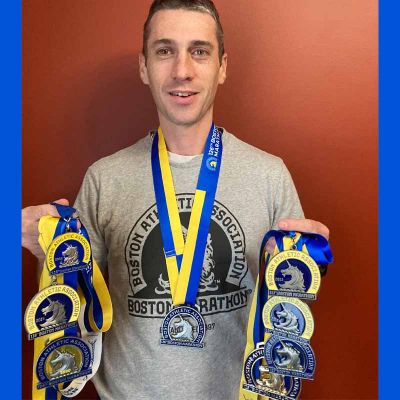 Reviewer Tom O’Grady is a successful runner, coach, writer and college professor with a joint appointment at NYSDOH/UAlbany School of Public Health. Click on his picture to read all that he has written for The Pace Setter – and it is a lot! Thank you, Tom!