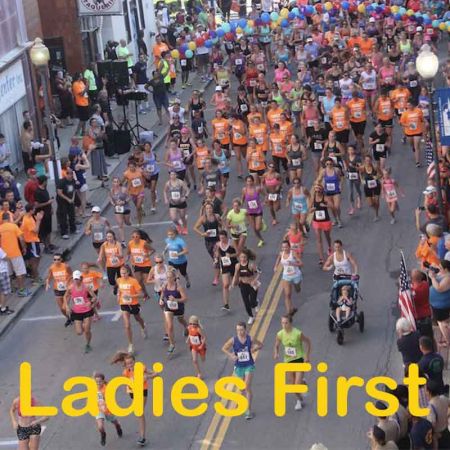 Without a doubt the biggest annual road race in Middletown, NY is the Classic 10k. It has been hosted many times in the past by Olympic gold medalist and Middletown native Frank Shorter, who is also a previous winner. Other past winners include Olympian Abdi Abdirahman, and Olympic medalist and NYC and Boston Marathon winner Meb Keflezighi. The race has a history of being highly competitive, challenging and famous - especially by upstate New York road racing standards. It is perhaps for this reason that the SECOND biggest race in Middletown took the "if I can't go bigger I can at least go stanger" approach. 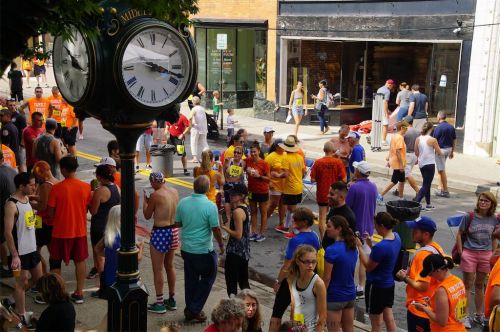 The Run 4 Downtown 4-miler with a pocket-sized park named after it in the heart of Middletown - does not have a traditional start. While it is not uncommon for races to have staggered start times (typically for Elites and for very large races which assign corrals based on projected finish times) it IS unique to give a group a headstart and plan on the next group catching them. That is precisely what is done at the Run 4 Downtown: each year, the women are allotted a head start (based on how the top men and women finished the previous year) and the men are tasked with catching up to them, and whoever crosses the finish line first - man or woman, head start or not - is deemed the overall winner.

At the 2022 edition, the women were given a 3 minute 40 second head start - historically for the race this represented a particularly large differential. The race itself can basically be broken into 4 segments: a long steep downhill followed immediately by an equally long and steep uphill for the first half mile, 2 miles of flat but windy roads, "the hill" and several long straightaways to the finish. Starting out with the men's leaders, we were already burdened with weaving in and out of the back of the women's pack by the initial uphill. From there it was two others and myself forming the chase pack through the masses of strollers, walkers and causal joggers trying to narrow the massive gap between us and the lead women. The pack of three was quickly whittled down to two, with me trailing the leader by a few seconds. Shortly after the 2 mile mark we hit "the hill" and I surged into the men's lead, still unsure of how far ahead the top women might be. With less than a mile remaining I could see the race was basically set: with the top two women very far ahead and me powering through on my own, resolving to go hard to the end regardless of any lack-of-impact it might have on my finishing place. In the end, the 2022 Run 4 Downtown was the first race I had ever run in which I broke the tape but was not technically the winner. 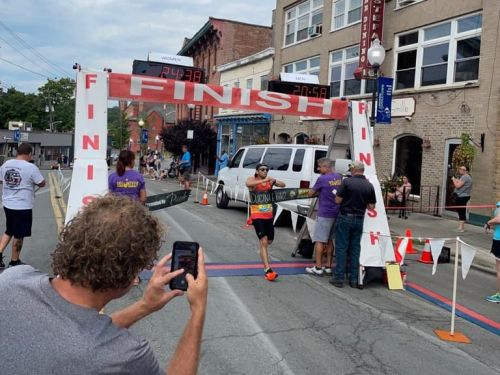 To myself though I felt just as much a winner as I have in other traditional style races in which I was officially the overall champion. A number of people came up to me afterward saying things like "to me, you won it" or after I told them I finished third they would try to correct me, "no, but seriously." Inadvertently, the whole situation oddly seemed to speak to the greatest truth of local racing: that winning is NOT important. What is most important is doing your best and being proud of yourself and your family and your friends and your fellow competitors whether they finish first or second or third or tenth or twentieth. After the race, being announced in front of everyone, drinking a special-release "Run 4 Downtown" ale crafted by the highly recommended Equilibrium Brewing, third absolutely felt like first. To be fair though, how could a person not feel a tremendous sense of accomplishment having the fastest net finishing time for an infrequently raced distance in the second biggest race in Middletown, NY. Jon Lindenauer is a force to be reckoned with.  He is a member of Willow Street and one of its leading runners.  In addition, his writing skills, which match his running talents, have made the Pace Setter an even more vibrant online journal.

Click on his picture to get articles about him or that he has written.