There are many announcements from engagements, weddings, anniversaries and to someone passing. If you have an announcement you would like to share with us, please click here.

We are thrilled to announce the engagement of Kelly Virkler and Dan Matchack.

“We had planned to take Jackson on a hike up Mt. Jackson on Dan's birthday for a long time, but I had no idea what he was secretly planning! Of course, I said yes. What a magical day! “

Samantha Legere, an elite runner, is the first sponsored runner through Immersion PT coaching for the fall,  is now engaged to Justin Brown.  They both share the love of skiing and who knows, maybe Justin will be tempted to try a 5K with his new wife.  They are getting married on Sept. 17 and pictures will be in the next issue of The Pace Setter. Lauren Scarupa and Doug Clark are getting married on October 22, 2022, and their wedding picture will be in our next Pace Setter for November.

They met at Joe Benny’s house 5.5 years ago and he was the officiant at their wedding

Shylah and Jacob Andrews will now race together down trails, roads, and life together.  They have our blessings! 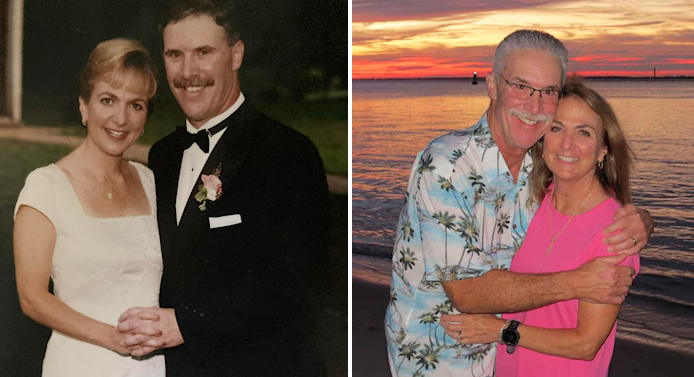 Jim Hickey, formerly of Wynantskill, NY and longtime member of HMRRC and the capital district running community passed away following a two-year battle with cancer on June 16, 2022.

Jim was raised in Hudson, NY and graduated in 1971 from Hudson High School where his running career began when the track coach saw how fast he was while spectating a baseball game. He joined the track team that year and running became a lifelong passion.

Jim worked as a letter carrier for the United States Postal Service in Troy and could often be seen running the 3 miles to and from work along Pawling Avenue, while walking his route in between. His position with the post office gave him the opportunity to carry the Olympic torch through Troy leading up to the 1996 Olympic games in Atlanta, GA. The torchbearer categories included community heroes, where the main criteria included notable work as a volunteer, service as a community leader, role model or mentor, acts of generosity or kindness, and extraordinary feats or accomplishments. Approximately 40,000 candidates were received, from which 5,500 community heroes were chosen.

As a middle-distance runner, Jim loved races from the mile to the 10K, but was also proud to complete multiple marathons, including the Philadelphia Marathon (1977) and the Mohawk Hudson River Marathon (1997). In 1985 Jim led a team of his peers in the Manufacturers Hanover Corporate Challenge to a second-place finish. His favorite races were the Delmar Dash, Run for the Roses, the Hudson Turkey Trot, and the Colonie Mile.

Mike Fazioli, a friend of Jim’s for over 40 years (and countless miles) remembers him as being someone who was always willing to share his knowledge to help pursue those elusive PR's. “I ran some of the best races of my career while training with Jim on the weekends. He made me a better runner.” It was thanks to Mike that Jim eventually worked as a Capital District Track official for local high school meets. “When my daughter went off to college and I needed an outlet from missing all her races, Jim joined me when I decided to become a track official, which we did together for years. Jim was simply a really nice guy, which even in today's world is still something you can admire. He will be missed.”

After 30 years of service with the postal service, Jim retired at the age of 55 and relocated to North Carolina where he continued to run, even after he was diagnosed with cancer and endured multiple treatments. He never lost his passion for running.