TJ’s Boston Experience: Nothing is Impossible 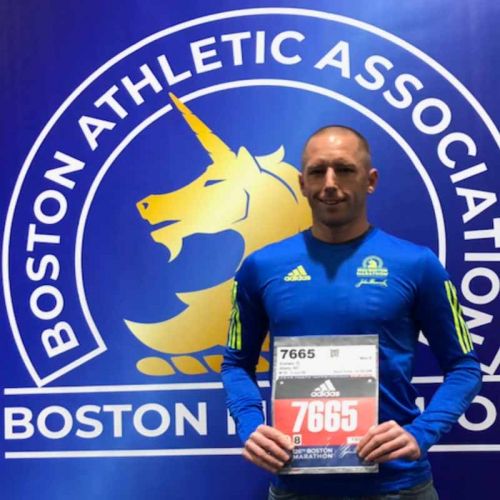 Impossible is nothing if you want something bad enough. That is in the mind of TJ Sherwin as he gets set to run the biggest race of his life. A childhood dream of his was to run the Boston Marathon. He did not know how he was going to get there or what he needed to do to make this happen, but he was determined not to let anything stop him.

So, when he qualified for the 126th Boston Marathon on April 18, 2022, after running his first marathon in May 2021, his dream was about to become a reality. Even though he qualified and was accepted there was still a lot of work to be done to his make his dream come true.

TJ was allowed to bring two support runners with him to aid him in the logistical aspects of the course, as he is deaf as well as legally blind. Mike Langevin and Joe Aliberti each ran half of the marathon course with him, with Mike running the first half and Joe running the second half. Their job was to help TJ at the starting line by pointing out wave and corral placements, alerting him to upcoming water stops and to help him navigate the finish line area. However, the hard work and determination on the course was all his responsibility. 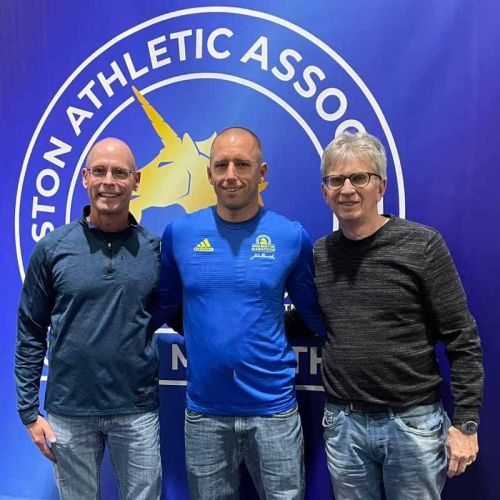 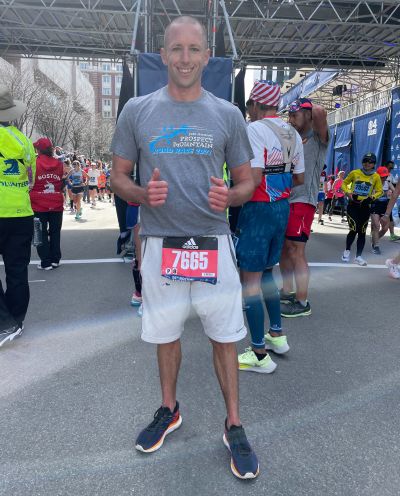 TJ comments, “Of course Boston is hard and people try to scare you about the difficulty of the course. But you can’t let other people scare you or you will never accomplish anything. My goal was to start out strong and stay solid throughout the race. I just wanted to finish. The last 8 miles were extremely challenging and I had to keep pushing myself mentally to keep going when my body was screaming stop.”

None of this could have happened, however, without the weeks of prior planning and strategic preparation by Janet Aliberti, who was such a big part of Team TJ in making sure there would be a seamless transition at the halfway point for Mike and Joe, as well as many other aspects of the day.

TJ has never given up on a challenge despite having had many thrown his way.
His motto is “Go Big or Go Home!” And in Boston that’s just what he did on this national stage.

As I look over to him at the playing of the National Anthem I can see the wave of emotion that has come over him as he realizes his childhood dream is about to become a reality. There was no greater feeling in the world for him or I at that moment. He continues, “Any goal can be reached if you are willing to try and don’t give up.”

Despite the difficulty of this course, TJ says he will be back. “What makes Boston so exciting is the inspiration of all the people, the ability to run in a race with the best in the world, the challenge of the course, and the experience as a runner of seeing that finish line when you make that last turn and crossing it. It is a feeling of ultimate joy when you put your hands in the air and see the crowds celebrating with you and everyone. The crowd’s response to your victory is a feeling of total humility that can only be understood when you experience it yourself. It is mesmerizing and magical!”

TJ is an inspiration for so many others to set high goals, work hard to achieve them, and enjoy the journey along the way. 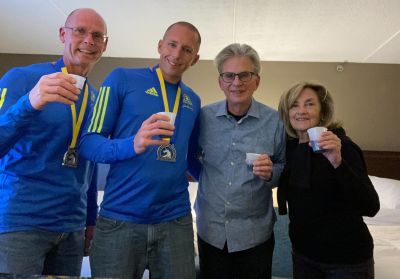