Take the Bacon and Run How did the bacon bit start?

To be honest I’m not completely sure how it all began. I’ve always loved bacon and I joked that it was a bad thing my youngest daughter liked it too. With all the negative rhetoric I’ve seen online in recent years, it just seemed like something fun to joke about. Now it's taken on a life of its own! I have socks and t-shirts with bacon on it. Plus, people send me bacon references for tons of different things; from items like soda, candy canes, donuts, different bacon-flavored beer...

What are your favorite weird facts or quick facts about bacon?

What are your favorite bacon jokes? When a room smells like bacon, there is no one in the history of the planet who has ever not been happy. Well, maybe that's an exaggeration.

Bacon is even becoming an acceptable dessert, with bacon-topped doughnuts, cakes, chocolates, and pretty much everything you can think of. The sweet and salty flavors are like a literal party in your mouth. What bacon paraphernalia do you think we should have?

Socks and t-shirts are the go to in my arsenal. Then again, when injured it’s always good to wrap your “hamming" (Staley reference) in bacon. If your unsure about this technique, just ask Derrick how much that helped him. He’s a true believer.

As a top runner, do you ever eat bacon?

Any parting words or facts about bacon?

In the 12th century, a church in Dunmow, England, offered a pack of bacon to any man who could attest to God and everybody that he had not fought or argued with his wife in a full year and a day. Anyone who could say that they brought home the bacon was very respected and had a reason to feel a great amount of pride. Now it sits in my refrigerator on a daily basis. Last month, I was taking pictures at the Delmar Dash and lo and behold I happened to see Bob Irwin, famous for his wacky Facebook comments on bacon, getting ready to run and there were his bacon socks! I couldn’t resist taking that picture and decided to make a contest to see how many could instantly ID the runner by his socks.

And the winners are:

I thank you all for taking part and all I can say is “Legend!” Bob is also famous for his Little Known Animal Facts, but that is for another time. 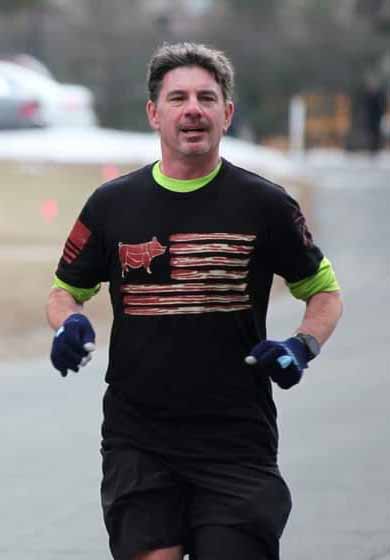 Bob is a member of Willow Street Athletic Club and is one of the HMRRC’s top competitors. When not entertaining us with his comments on Facebook, he is a chiropractor located at the Delmar Chiropractic Office on 204 Delaware Ave.