Can't Keep a Good Woman Down This one’s for the ladies and all the men who love and admire them.

I start by saying, how quaint.

Back in 1967 Kathrine Switzer made history as the first officially registered competitor, under a name that did not reveal her gender in the Boston Marathon. Before Switzer, in 1966, Roberta Gibb ran the Boston Marathon as a bandit.  She had tried to register but was rejected by race director Will Cloney “because women were physiologically incapable of running marathon distances,” not knowing that before Patriots’ Day her training included 40 mile runs.

The AAU had a rule on the books: women were not allowed to compete in AAU-sanctioned races over 1.5 miles. Really! Was this some patriarchal attitude toward women, as in let's protect the little lady - she doesn't know what she's doing .. or was there a nagging fear women COULD compete and somehow, steal some of the thunder of the male competitors?  Misguided protection was one reason. Some experts claimed distance running would damage a woman's health. There was no data, and in fact medical studies have shown that to be false, and clearly the field of talented, fast, female runners is the proof before your eyes. And the ban goes back to ancient times. Not only were women forbidden to race in ancient Greece, they weren't even allowed to be spectators. The penalty for watching the games was death. Much like Switzer and Gibb, the ladies of that era found a way to compete. They held a festival honoring the goddess Hera. It was held every 5 years and the only athletic event was a short-distance foot race. Clearly, ladies have loved running for centuries.

And as for Switzer, despite an on-course battle to get her off the road, she persevered and covered the 26.2 miles in 4 hours and 20 minutes. Gibb ran it in 3:27:17. In 1972, the first time women were allowed to run officially, eight pioneer women ran the Boston Marathon: Nina Kuscsik, Elaine Pedersen, Kathrine Switzer, Pat Barrett, Sara Mae Berman, Valerie Rogosheske, Ginny Collins, and Frances Morrison.

What really speaks to me about Switzer’s run is that it was very normal, in that she didn’t break 3 hours. And she didn’t consider herself a very talented runner. In fact she’s quoted as saying "I had a real chip on my shoulder because everybody said, 'you're just a jogger', and that really upset me," Switzer says.

"I knew I wasn't a really talented athlete, but I also can work really hard and when I worked hard and got down to 2:51, that's when I really realized, if I can do it, anyone can do it.”

Can anyone do it? I don’t know. I surely could never get to that time when I was running distance. Perhaps I didn’t want it badly enough. Perhaps talent is in the legs of the runners. But the point is, if you WANT to run the distance you can. And that’s a key part of Switzer’s and Gibb’s legacy. They not only opened the door to women being accepted in marathons, they opened their eyes to what they could do. Sometimes we need a beacon, lighting the way, showing us it can be done. Then it’s up to us to invest our energy and imagination. Remember, back when Switzer and Gibb ran that first marathon there were no running shoes made expressly for women. There simply wasn’t a market for them. Now you can buy running shoes for every day of the week.

Boundaries are usually crafted by those who think they have something to lose. The truth is boundaries hold everyone back. When we break them, we all win.

So dream. Try. Reach. 30 years ago I WANTED to be a runner but I never thought I’d be a marathoner. I’ve got 5 medals that prove otherwise. I’m not talented. I’ve got that middle to the back of the pack covered. But I still log the 26.2 miles. I still gear up, toe the line and figure out how to cover the miles, especially the final 10K, and smile at the end.

So be like Kathrine and Roberta. Work hard. Whatever the clock says can’t diminish the effort and accomplishment. Heck, one day you might be the only 80+ woman running Boston! 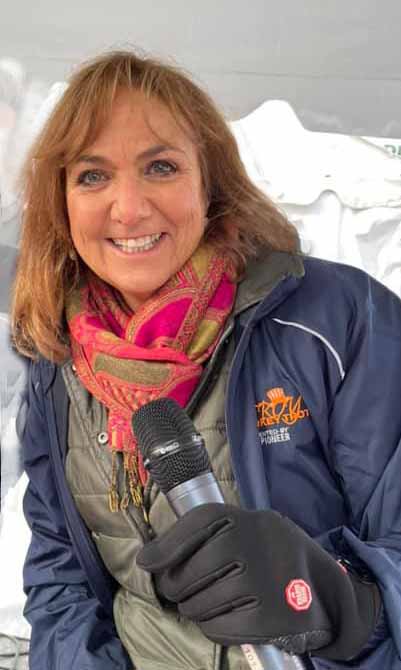 Benita is a certified Health and Wellness Coach working with clients at Capital Cardiology Associates. Benita spent more than 40 years as a health reporter and news anchor at WNYT in Albany, NY. She covered issues such as wellness, treatment breakthroughs, aging, nutrition, and the latest health care trends. Benita’s work has taken her around the world and across the USA. She continues to produce and host “Health Beat” a digital health interview program that posts every Monday and Thursday on wnyt.com and can be heard on the station’s podcast. Benita is a contributor to the weekly “Live Smart” page in the Times Union, the HMRRC Pacesetter and the new magazine 55+LIVING. Benita also created and co-hosts the podcast EVERYTHING THEATER.