A Sneaker Straddling Both Worlds All or nothing is not necessarily the way to go, as I recently learned during a weekend spent running both the Adirondack Runners’ Race to the Lakes 15K and Albany Running Exchange’s Dodge the Deer. I thought I was doing a road race at Lake George and a trail race at Schodack Island State Park. But in reality, much of the Lake George route consisted of shaded bike paths and had the ambiance of a run through the woods, while Schodack Island has a truth in advertising problem as well. Once a group of six Mahican islands, it was reshaped into a peninsula in the 1900’s when a federal canal dredging project caused the spaces between the islands to be filled in, resulting in wide, mostly level, fairly smooth trails. So we have a road race with the feel of a pleasant jaunt in the woods, and a trail race with winners’ times rivaling those of a flat 5K road event. For a bit more history, this was the third “annual” (not counting the COVID years) Race to the Lakes, which serves as the replacement for the 10 mile Lake George to Bolton Landing run. Dodge, now celebrating his 20th rendition, was the first event ever offered by ARE as well as the first race they hosted after the pandemic. Being a grazing animal, Dodge the Deer has covered considerable territory, spending his formative years at Rensselaer Lake Park, then moving to Schodack Island State Park. After a pandemic break, he emerged at the Chromczak Family Farm in the Slingerlands. This was a good deal for Emily and Chris because a crew of volunteers cleared a one-mile loop through their fields and woods. After that, Dodge moved on to Thatcher State Park and now, once more, returned to Schodack Island. I wonder if Dodge is secretly in training for an ultra? Thankfully (once you got over the early wake-up call), Lakes began at 7:30am so we got the unshaded road portion over with before things began to seriously heat up. During this section, we toured parts of the campus and then headed out adjacent to the open fields of a golf course. This is also the hilliest section of the route, so it was good to tackle the elevation early on. DTD, on the other hand, began at a leisurely 10am, which should have worked well being that we were running in the woods, except that the final mile, flat, straight and seemingly endless, was very wide and was not fully protected by foliage. That, combined with the dust of a dry summer, gave a desert feel. Yes, the tree tunnel was there, but more detached and not as enthusiastic as it could have been. The asphalt trail portion of Lakes was delightfully shaded, regardless of the fact that the invasive spongy moth caterpillars had been busy munching. In case you were curious about the sand-colored deposits on the trail, it was not dust storm sand, but caterpillar poop—wash those sneakers!

Despite its youth, Lakes is more of a grown-up race because of its 15K format and logistics. It is staged from SUNY Adirondack and culminates on Lake George, where participants catch a bus back to their cars. Because of this factor, there is little lingering, although next year some of us are talking about organizing a car shuttle for an extended beach stay. Dodge is right there in the thick of things, with a kids’ playground the centerpiece of the action, a storyboard walk, and a great view of the Hudson River. Not to mention the multiple kids’ sprints. Afterwards, participants and their crew from 1-81 years old enjoyed a plentiful barbecue picnic and Josh Merlis’ TV Master of Ceremonies-worthy finish line and awards banter. I spotted several cars hefting kayaks and figured some were planning to make a day of it.

Both venues merit future returns in non-race mode. I would like to stroll along the Hudson and read all the informative signage and walk the Lake George bike path and learn about the trees and land features I had breezed by while running. In both cases, I felt like I only had time to read the signage headlines and was left wanting more. And after all, that is one of the goals of these events—to get to you to return to the venue, to explore further and to make it your own. 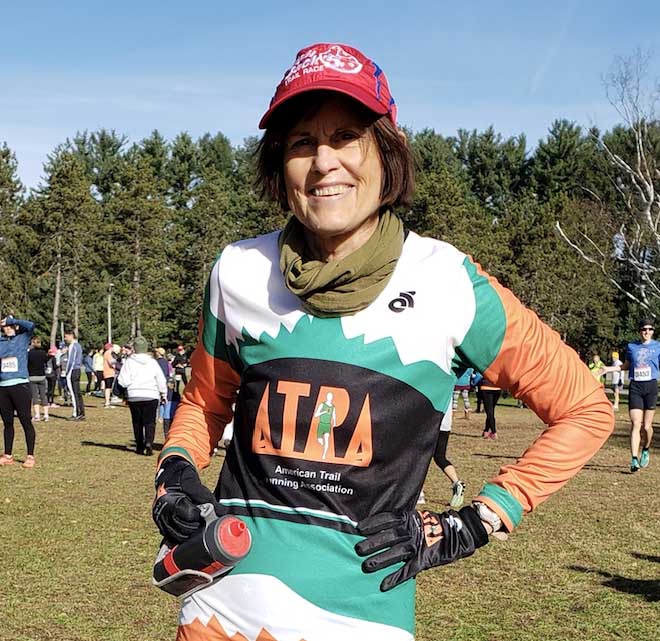 Laura is an avid mountain, trail, snowshoe runner and ultramarathoner who lives in Saratoga Springs, NY, where she is a children’s librarian.