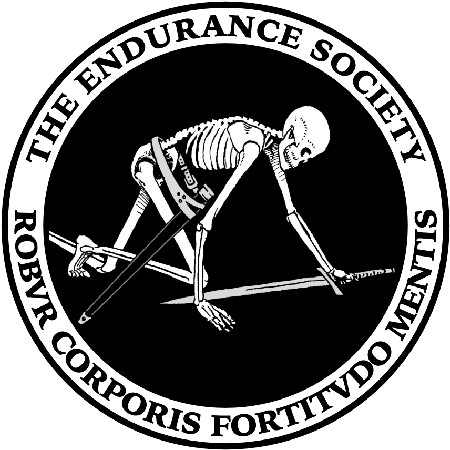 The above emblem is probably all you need to know to get the rough idea: a wasted skeleton, still clinging to his sword (or in this case, trekking pole) crawling to the summit of the Staircase of Death. Speaking of which, I did not make that up. That is the actual name of one of the climbs we encountered during the Endurance Society’s Frigus expedition at Moreau Lake State Park located in upstate New York, at the edge of the Adirondacks. Doubly scary, as these were only the foothills.

You may well ask, what is a frigus? The term, derived from Latin, is exactly what it sounds like: frigid, bone-chilling temperatures that penetrate through your modern wicking layers down to your very bones. But wait, the translation also implies a threatening cold shudder produced by fear. And rightly so. With a single 15K loop featuring just shy of 2400 feet of elevation gain, the three-loop marathoners had plenty to fuel their apprehension. One would naturally assume that an athlete not opting for the 5K version or the single 15K loop would address such an undertaking with a protective shield forged from hours of training runs. But there is more to it than that, as Race Director Andy Weinberg points out, “The sword is pointed toward the skeleton as the battle is within.” One 15K run would get you a finish, but two? Not so much. The posted options were 5K, 15K or Marathon. No middle ground. Continue forward beyond the 15K and you were up against the sword. 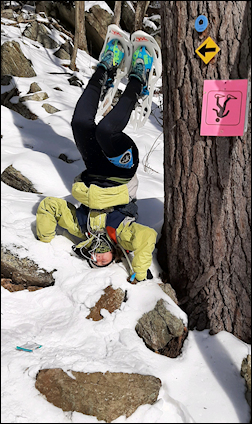 Mental struggles aside, we had the Polar Vortex to contend with, facing 5-degree temperatures at the start. I briefly toyed with the idea of wearing my parka instead of my jacket and even threw it in the car, until the bright, sunshiny day convinced me otherwise. When training for the event in similar conditions, I stuck my handheld bottle inside my fleece jacket with no success, so this time I went with an insulated bottle. The bottle was fine but the nozzle froze, along with my zippered pouch containing most of my snacks. I did OK until the final few miles when I bonked. I was familiar with this part of the route and knew I could mentally hang in there, although it was painful to be passed with the end in sight. It didn’t help that I made the same wrong turn I always take, avoiding the sharp right to the exit in favor of the easy out to the road. I have failed to execute this turn in all four seasons, even with winter’s snowshoe prints clearly indicating the correct path. I have proven myself a slow learner.