The American College of Sports Medicine (ACSM) is the nation’s largest group of exercise physiologists, sports nutritionists, and a multitude of other sports medicine professionals. Each year at ACSM’s Annual Meeting, members gather to share their knowledge and latest research. Here are highlights of two presentations from the June 2022 meeting in San Diego that might be of interest to runners intent on improving their performance.

Coffee, Caffeine and Caffeinated foods: What Do Runners Need to Know?

Guidelines regarding the consumption of caffeine to enhance athletic performance have changed significantly. It was believed to be a diuretic, beneficial in high doses primarily for marathoners, and most effective when consumed an hour pre-event. Almost every aspect of those ideas has been replaced with newer knowledge:

• Caffeine is not just for endurance runners; it offers a three-percent improvement in performance in many real-life sporting events including shorter races and team sports. In addition, caffeine may help athletes such as body builders train harder.

• Caffeine offers similar benefits whether you take it one hour pre-run or only during a long run. Even low doses of caffeine (as in a gel or caffeinated gum) are effective when consumed just prior to the onset of fatigue.

• Caffeine can help runners train better when they are jetlagged or when their circadian rhythms are out of line.

• Each individual runner needs to learn from their own personal experiences the right caffeine source and dose for their bodies. Genetics influences the enzymes that break down caffeine.

• If you consume 1 cup of coffee in the morning, most of the caffeine will have dissipated by lunchtime. In general, caffeine stays in the body for about 7 hours. Its half-life (time taken for caffeine in the body to drop by half) might be five hours (or less) for some runners, but ten hours (or more) for others.

• Female runners should know that birth control pills almost double the half-life of caffeine, making it more effective for longer.

• If you happen to be a slow metabolizer and then take a pre-workout caffeine boost before your afternoon workout, you might have some caffeine “overlap” from your morning cup of brew. Even if you abstain from caffeine for 12 hours, circulating caffeine might still be detected in your blood due to caffeine accumulation with repeated caffeine consumption. Depending on your tolerance, this could be helpful or harmful.

• Habitual caffeine intake does not seem to influence its energy-enhancing effect across a range of different sports. That means, if you regularly consume coffee every day, there’s no need for you to stop consuming it for a few days prior to a race. Caffeine withdrawal feels horrible and you’re unlikely to gain any benefits! Biomarkers That Impact Training and Performance: What do runners need to know?

Biomarkers are best used to document changes over time (as opposed to taking one measurement, such as serum ferritin, to see if the measurement simply falls within normal limits). Biomarker data can help assess changes in performance, recovery, and training optimization. Biomarkers might be able to predict and prevent illness. For example, in an 8-week basic training study, a third of the soldiers whose biomarkers classified them as being overreached experienced illness.

• The military and some professional athletes and teams are very interested in measuring biomarkers. Connecting biomarkers to measurables like performance, training, sleep, and diet provides context and meaning to the measurements. By keeping athletes healthy and in the game, the likelihood of a winning season improves.

•With biomarker research, we now know that food deprivation can be more detrimental to performance than sleep deprivation. With Army ranger training, a 1,000 calorie per day deficit reduced testosterone and increased cortisol. Many markers can take a full month post-dietary restriction to get back to normal.

• Biomarkers can document the physiological impact of restrictive food intake and show how much better runners can recover when they are adequately fueled.

• Both physical and psychological stress impact biomarkers, as does travel through time zones. Seeing sleep data can help runners learn the value of prioritizing sleep.

Wave of the future?

Runners who are interested in getting their biomarkers measured should know this is an emerging field with many yet unanswered questions, including:

What is the best time to measure biomarkers? (Should recovery markers be measured right after exercise or a day later?)

How often should measurements be taken? (Might depend on who is paying the bill!)

Should athletes not exercise the day before blood draws/data collection?

Do biomarkers differ when measured under research conditions? (That is, does lab data compare to data collected at a real-life competitive event like a marathon?)

What is the minimal performance-enhancing level of a biomarker? Is higher better?  When is a level too low?

Can biomarkers predict and prevent illness? And very importantly,

Will coaches (and athletes) be willing to alter their training schedules based on biomarkers? Coaches’ buy-in is essential, as is the runner’s willingness to alter training plans.

With time and well-established protocols for measuring biomarkers, this evolving field will have a significant impact on improving the health and performance of members of the military, professional athletes, as well as runners and curious consumers who can afford this luxury. 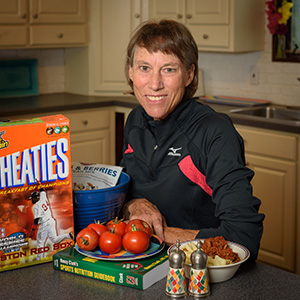 Sports Nutritionist Nancy Clark, MS, RD counsels both casual and competitive athletes in Newton MA (617-795-1875). Her best-selling Sports Nutrition Guidebook is a popular resource, as is her online workshop and books. For more information visit www.NancyClarkRD.com.