November 14th marks the forty-fifth running of the Stockade-athon and the first time in two years that runners will cover the 15 KM course through Schenectady. There are certain times of the year that are just made for road racing. The Stockade-athon is held during that one of those rare windows of time that usually coincides with some of the best conditions a runner can ask for when trying to cover 15 KM as fast as possible. It should not be surprising, then, that the Stockade-athon has become a staple on the HMRRC calendar. The Stockade-athon certainly one of the most popular races in the area as it has regularly hosted over 1,000 finishers throughout its history, with those numbers climbing closer to 1,500 finishers over the past decade. It is clear from looking through the historical results that the Stockade-athon is also easily one of the most competitive road races in the area. 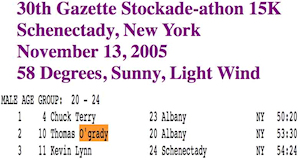 For me personally, I was sold on the event since I used it in 2005 as an end of the season peak during my sophomore cross country season at RPI. The race was on the same weekend as regionals. Since I was an alternate, I was able to travel to regionals, and then because of the timing also race the next morning at the Stockade-athon. It felt great to get out and slip into a tight pack with a group of runners in the early miles of the race. Since it was the second time I had run the course and I was much fitter,  I overextended myself on the part of the course that followed the old Stockade district (miles 3-5 on the old course). Naturally, this made the climb up State Street a drudgery and although the entrance into Central Park was painful, I was able to run a respectable time.

The course is such that if you really want to run well you will have to give your strategy some thought. On the old course, the layout was such that the early miles begged an individual to overextend themselves. Those who gave in to the early pull of the course, and competition, became unfortunate victims once they faced the steep State Street hill followed by the rolling hills along Central Park in the final two miles on tired legs. There were surely many individuals over the years with dashed hopes who wondered how they could have better measured their effort as they exerted themselves on the course before crossing the finish line. Although the course has changed, the need to consider your race tactics has not. With the race starting on State Street and beginning with a quick net elevation drop over the first half mile, the course still draws runners out very quickly. Now, though, runners are faced by a slight and steady incline over the first nearly two-thirds of the race. For those who are patient, the course finally relents over the last two miles and becomes very fast as one exits Central Park and makes their way down a steep net decline towards the finish. For someone who has not always had the most speed, but is capable of being patient and grinding, I’ve always liked the layout of the course whether it was the old or the new set up. The design generally suited my strengths as a distance runner. Because of this, the race has become a favorite on my calendar and I’ve tried to return each year with some sort of goal in mind. As the Stockade-athon has become a personal favorite of mine it has been great to see the popularity grow among other runners, as well as the efforts to keep improving each facet of the event. It will be great to see the Stockade-athon returning to Schenectady as a staple in the HMRRC’s fall racing schedule. 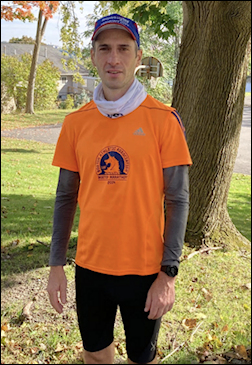