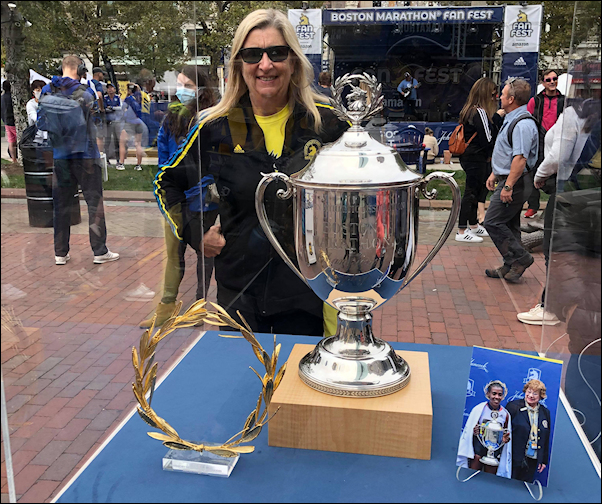 I was very excited about this year’s Boston Marathon, but a little apprehensive because I hadn’t run a marathon since October 2019. I have run Boston several times now and I was worried about pulling off such a big event in the COVID era. There were many changes made to this year’s Boston’s Marathon, but it still was a great experience. First, runners had to make an appointment to have their vaccine status verified, or to get a test. You couldn’t participate in any marathon related events without the wristband that was issued. Everyone had to wear a mask when indoors, according to Massachusetts law, and I didn’t come across anyone who wasn’t happy to wear one. After getting my wristband I headed to the Prudential Center to get my bib and shop. I went on Saturday morning and found the crowds weren’t as bad as in the past. One of my favorite marathon activities, especially in Boston, is the expo. At the expo there are usually posters handed out with every runner’s name on it. There were no posters this year, just a big wall of names at the expo.

The expo always been huge, taking up an entire floor of the convention center, but this year I was disappointed that the only large vendors were Adidas, Sam Adams and Nordic Track. Gatorade, Maureen, Marathon Tours, and Abbott World Marathon had small setups, but none of the major running shoe and clothing retailers were there. The seminars and speakers’ panels were held at an outdoor Fan Fest and there was an outdoor exhibit of Boston Marathon memorabilia on display, with Katherine Switzer’s bib and infamous sweatsuit, the gold crown and winner’s cup, old medals and many other really interesting displays. Boylston Street was busy and the shops were busy too, so I got my shopping fix. Marathon morning was different this year too. Rather than head to the buses early, ride to Athlete’s Village and hang out in portapot lines, runners were given specific times to board the buses based on expected finish times. This meant hanging around my hotel room until it was time to leave Boston. I actually was able to watch the start of all the races before I left for my bus. The buses took us to Hopkinton, unloaded runners near the school, but rather than hanging around we immediately walked toward the start line, where there were lots of portapots and happily, not a lot of long lines. Then a big change was the rolling start. Rather than waiting in corrals, we just walked to the start line and started to run. I think I liked this a lot better than the old corral system. So with my pace goals in hand, I took off for a return to Boston. The first miles were all about taking it easy, and with no PR goal, I made it through the first half of the race and still felt comfortable. I passed the usual sites: Riley the Golden retriever was at mile 3 with his Boston Strong sign, Santa was at mile 9.5. There were crowds of spectators the entire course cheering and encouraging the runners. Then there was the struggle through the Newton Hills. It had warmed up quite a bit and the sun broke out every so often, making it all that much harder. One familiar thing was real water stations with cups of water and Gatorade. The fuel changed this year, with Maurten gels at 11.7, 17.5 and 21.5 miles. As I got closer to Boston, the familiar crowds were not as big as earlier years, but seemed just as loud. The finish was a wonderful sight, and I was really happy to be done! Marathons are hard, and Boston is one of the harder ones. BAA and the city did a great job of pulling off a great and safe major marathon. Looking forward to returning in the spring!

Kim Law. This was Boston #8, Marathon #34. I train with Nark Running Strategies. 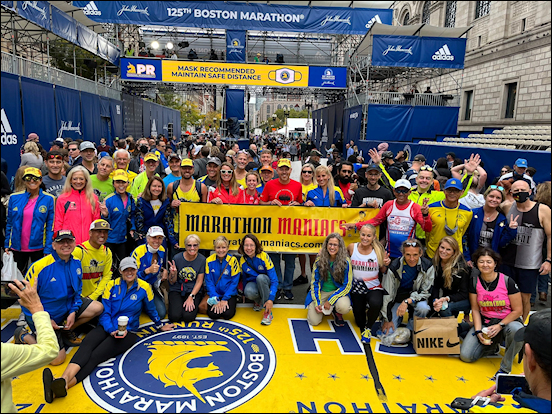 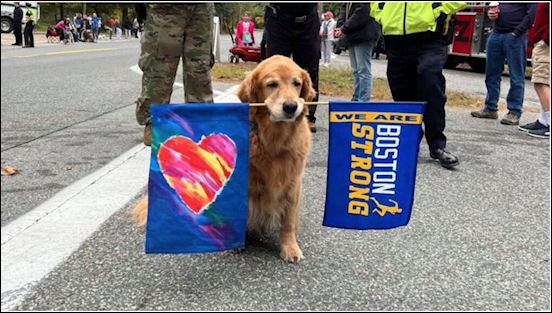