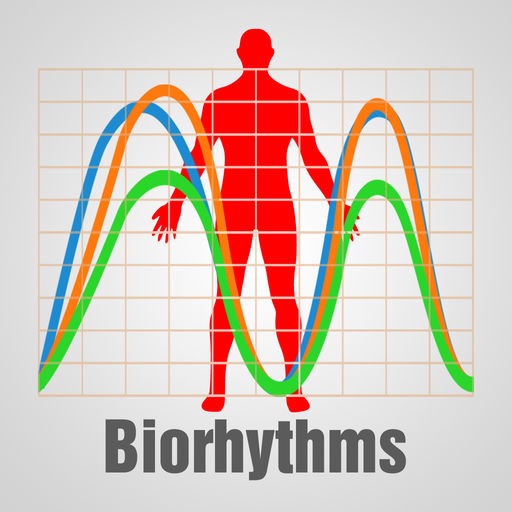 We all have those days where you go out to run and it’s over before you’re winded. Or you go to the gym and two-thirds through the workout you check to make sure the weights are right because all this is so easy. And then there are days where all your effort is just getting your shoes on – what is going on here?

Most people, by their mid 20s, have figured out that life cycles through good and bad times. You have “good days” and “bad days” however those are defined, but life continually cycles through these times and you are left to play the cards Fate has dealt.

But some believe these good times and bad times can be traced and even capitalized on. The study of biorhythms presents a unique perspective that may yield some tangible results.

Life is made up of countless cycles or patterns that repeat over time. There are the short cycles like the endless sweep of the second hand on a watch to the daily day-night cycle. Longer cycles include the days of the week, phases of the moon, yearly seasons and even the Olympic 4-year cycle. While many are oblivious to these cycles, they happen to everyone and both directly and indirectly influence one’s life.

But an important consideration here is that all the above cycles are outside the body. They pretty much repeat whether we are here or not here. They went on before we were born and will probably go on after we die.

Most athletes have noticed the peaks of the physical cycle with heightened feelings of strength or power, endurance or stamina or the lack thereof, if one happens to be on a down cycle. The emotional and intellectual cycles seem to generate less general awareness, but I think most would agree that there are days when one’s relationships, sense of intuition or creativity seem to be enhanced (emotional) and other times when thought, judgment and concentration may seem to be equally profound and effortless (intellectual). 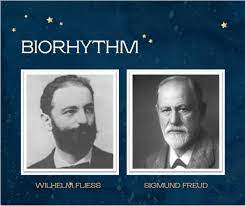 Originally “discovered” in the 1800s, biorhythms have also cycled through times of acceptance and skepticism. They were used by Sigmund Freud in the late 1800s with his patients. In the 1970s and 80s, biorhythms were all the rage, with books published with numerical formulas to plan one’s life accordingly.

When I was coaching, I briefly considered using biorhythms with the athletes, but the process presented with a few problems. Firstly, in the “old” days one had to calculate the biorhythmic cycles by hand. You needed the athlete’s date of birth and the current day’s date. Then you had to figure out how many days the athlete had been alive, count the leap year days and then divide by 23, 28 or 33. Finally, you had to double-check the math to make sure there were no mistakes. Certainly not an impossible task, but slow and tedious.

Secondly, I questioned what to do with “bad” information. What if for a championship meet the athlete was at a low point in a cycle? There was no way I was going to tell someone, “You’ll probably have a crappy day today because your biorhythms are low.” What would be the point? On the other hand, even if the biorhythms pointed towards having a stellar day, I felt it was better left unsaid, as any mention could just add another brick to the load in terms of expectations. In the end I decided ignorance was good coaching.

Today (2021) biorhythms are seen by most as a fringe science with little reproducibility and less consequence. I do remember my Russian teachers mentioning that biorhythms were considered when planning training cycles. We were taught the difference between a high and low cycle could be as much as 2%. While that may seem like an insignificant number, for a highly trained runner that could be as much 5-6 seconds in a mile run.

The study of biorhythms today is dismissed as pseudoscience – a belief mistakenly thought to be based on scientific method. For science to be science you need three things – cause and effect, reproducibility, and a universal application. Ideally, science is conducted with unbiased observation and systematic experimentation (more on that later). “Cause and effect” is simple to explain. If I do A and B happens, and if you do A and B happens, and the next person does A and B happens, we may all be onto something, especially if further experimentation consistently repeats this pattern again and again and again.

A causing B in this example also satisfies the second need for reproducibility. If doing A causes B time after time, trial after trial, this would be seen as a scientific result that allows the scientist to conclude with scientific certainty that A causes B, from which one can safely make conclusions that can have implications for health, diet or training.

Finally, there needs to be universal application. Would we get the same experimental results in Timbuktu as we do in New York? Or are there confounding factors in the environment (location, elevation, barometric pressure, temperature, time of day, etc.) that do not allow A to cause B?

If we take gravity, for example, the higher one’s elevation is, the less the force of gravity, not much but some. Were there apple trees at the top of Mt. Everest, the apples would still fall to earth, but would take a longer time, again, not much, but some. Gravity is present on Everest (there are avalanches, after all) but the “pull” is not as great. Therefore, we can conclude that the results of some experiments need to be qualified.

The “qualification” process is where statistics, politics, religion, economic interests and egos get involved in science. And one can conclude with scientific certainty that this can produce a mess for a result. No longer is science simply hard, cold facts. Science morphs into debate, nit-picking and a muddled presentation that hinges on showmanship as much as it does on incontrovertible facts. This is especially true if someone’s “discovery” challenges the established order and/or involves personal economic gain.

Throughout recorded history there are numerous examples where scientists made discoveries that were innovative works of genius and world changing, which led to the scientist suffering humiliation, character assassination or imprisonment while attempting to gain wider acceptance of their new theory. Three quick examples are Galileo, Semmelweis and Bennett Omalu.

Galileo figured out that the Earth was not the center of the universe. For whatever reason, that inflamed the Catholic Church and Galileo was given the choice to rescind his claims or face an Inquisition. He went the Inquisition route and spent the rest of his life under house arrest. Semmelweis introduced sanitary conditions to hospitals, particularly washing one’s hands. He found it cut down on mortality rates significantly. His “crackpot” claim ruined his reputation and he died in an insane asylum.

Omalu’s autopsies of former NFL football players led him to the conclusion that repeated head trauma causes the brain changes that lead to aberrant behaviors, loss of function (memory, critical thought, speech patterns, etc.) and can also result in a state of profound depression.

The NFL closed ranks and brought forth “expert after expert” to refute Omalu’s claims (see League of Denial on YouTube). But subsequent autopsies on brain after brain of football players, boxers and other athletes who suffer repeated head traumas have proved Omalu to be right. This has all happened within the last 15 years. Actor Will Smith made a major motion picture called Concussion in 2015 on the whole ordeal.

There is a natural lag between most discoveries and general acceptance. Humans are humans and we get stuck in our ways. Change can be intimidating but also inconvenient. But improvement necessitates change and if one’s mantra is “higher, stronger and faster,” out of necessity one must experiment, consider and test new and different approaches, even if the results suggest a different path forward.

There will always be some problems with biorhythms. There is never going to be a clear definition of what “good things” can happen on a peak day. Might it be finding a dime on the sidewalk or rocking a final Jeopardy question? And are good things repeatable from one peak day to the next? I think most would agree that there are peak days of physical strength, clarity of mind or profound understanding, but what is one to do on the non-peak days? Stay in bed?

In any scientific inquiry is the echo of Galileo’s words, “Measure what is measurable and make measurable what is not.” When that time comes and biorhythms are “more measurable” there will be greater acceptance of this concept. In the meantime, one might consider looking at biorhythms as a clue when to train a little harder when on a physical upswing and taking some deserved rest when the cycle takes a downturn.

Several sites on the Internet offer quick and easy calculations (Biorhythm Calculator (biorhythm-calculator.net); FREE Biorhythm Readings (facade.com)) for one to graphically chart one’s current biorhythmic pattern. I’m not recommending one plan life around these patterns, but you can conduct an experiment of one to see if you are scheduled for a “good day” regardless of what your horoscope says. 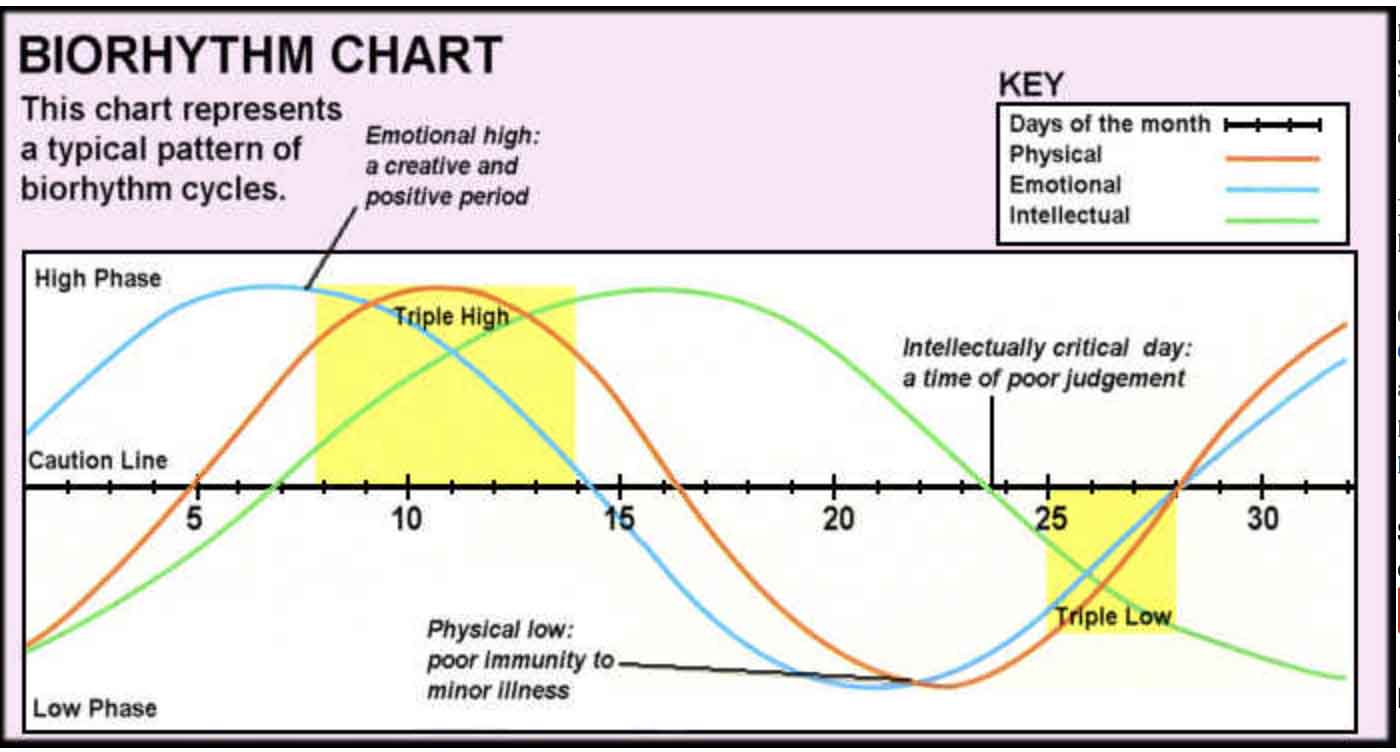 Russ Ebbets, DC is a USATF Level 3 Coach and lectures nationally on sport and health related topics. He serves as editor of Track Coach, the technical journal for USATF. He is author of the novel Supernova on the famed running program at Villanova University and the sequel Time and Chance. His most recent book, A Runner’s Guide, a collection of training tips and running articles was a 2019 Track and Field Writers of America Book of the Year finalist. He can be contacted at spinedoctor229@hotmail.com.