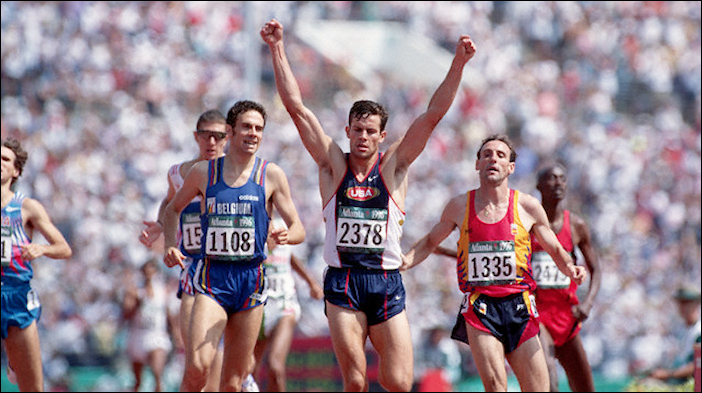 Who comes to mind when you think of an American distance runner who was at the front of the pack and who also had a build more akin to that of a football player? While Chris Solinsky is likely the first name that comes to mind, Paul McMullen was a 6-foot-2 165-pound elite distance runner in the 1990s who began his sports career as a high school football player. Unfortunately, McMullen passed away in early March after a skiing accident, but this provides an opportunity to remember a titan of the sport in the 1990s.

In this documentary, I Dare You To Run - https://www.youtube.com/watch?v=VOKBcqHPyiw&t=1073s, posted to YouTube last spring, McMullen, with Kevin Stinehart, poses the question “How good can I be?” and then proceeds to answer in his own words how he went from being a football player to transforming himself into a track runner who would go on to become a world-class miler. In his prime, McMullen competed in the 1996 Atlanta Olympics and raced against the best in the world at a time when American distance running was experiencing a lull. McMullen would go on to be named by Track & Field News as the US #1 1500-meter runner in 2001 after posting a 3:33.89. McMullen’s 3:33.89 in the 1500, which converts to a 3:49 mile and betters his actual mile best of 3:54.94 by almost 5 seconds. The performance was run after coming back from a lawnmower accident. This feat would leave McMullen with the title “Fastest 8-toed miler” in the world in addition to his US #1 ranking for the 1500 meters.

McMullen’s story is an inspirational one of an individual who persevered despite numerous obstacles and uncertainties on his way to becoming a top runner. Quips from his college-recruiting trip with a top program, “For me to get a small scholarship I would have to win a state championship,” or “Like coach Parks promised I received a $600 scholarship and I found out even state champions work construction to help pay for college,” are fitting examples of how even those individuals at the top do not walk an easy path. McMullen had a tremendous faith in the process and believed in his ability to physically mature over a long period of time. This brings to mind the saying: “Most people overestimate what they can accomplish in a year and underestimate what they can accomplish in a decade.” McMullen took the approach of maximizing what he could accomplish over a decade – state high school championships, NCAA championships, a top brand-name sneaker deal, 1500-meter USA Championship winner, 1500-meter World Championships finalist (10th), Olympic athlete in the 1500 meters, and multiple other accolades.

Paul McMullen’s favorite quote, “Today I gave all I had, what I’ve kept is lost forever,” captures the transient nature of life and sport and is a fitting way to end a memorial piece.