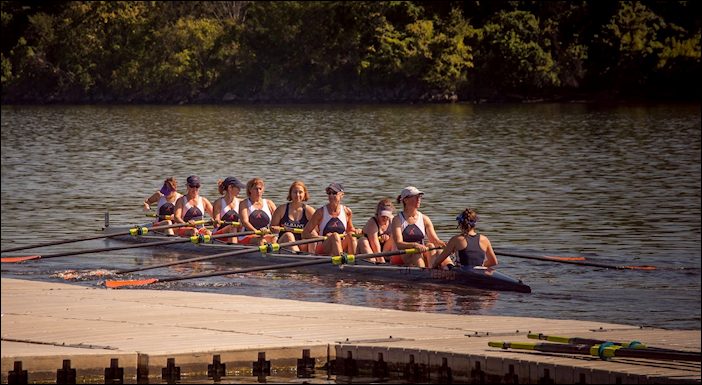 Heading toward a Head of the Hudson regatta start, an Albany Rowing Center crew pulls away from the dock. “Our Oars Are Orange” is the ARC motto.

The seduction began at a small table by the riverside.

A smiling woman chatted with me a bit, then said her organization wanted me for my body. She handed me a pamphlet with an invitation to an assignation a few weeks later.

To learn to row.

Rowing is ideal cross-training for runners, and runners are ideal shipmates for rowers. When I joined the Albany Rowing Center two years ago, rowing joined running and golf as my ideal troika of warm-season sports.

I’m trying to get you, too, out on the water—not just on a rowing machine (which many of you might already use). Rowing in a shell offers a unique amalgam of technique, teamwork, speed, scenery, and community. 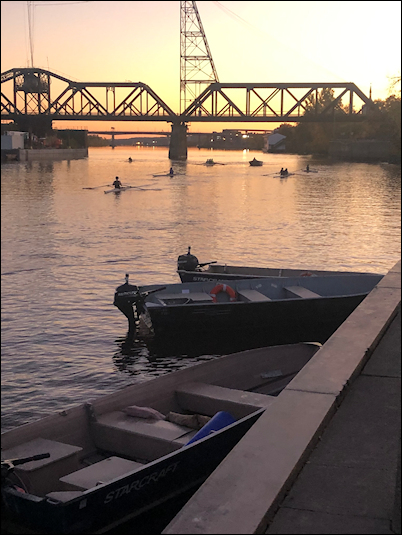 Why do rowers want runners in their boats? Because, as you know if you’re using your rowing machine properly, this sport is more about legs than arms. Unlike kayaking and canoeing, the seat’s on tracks and your lower body pushes back as the oar blades go forward. I love to be the big dumb leggy engine in the middle seat of an eight that’s sweeping down the river, with an experienced “stroke” setting the rhythm and a coxswain calling the pace.

The upper body still plays a big enough role to provide plenty of offset for running’s legwork, and Olympian rowers do a lot of weightlifting. Me, I mostly let the actual rowing do the bodybuilding, along with the lifting of boats above my head to carry them down to the dock.

It’s all low-impact as well as high-energy. Rowing builds leg strength without pavement pounding, and it does wonders for your core and posture – especially when you’re a slumper like me and have a coach, um… perfecting your position. 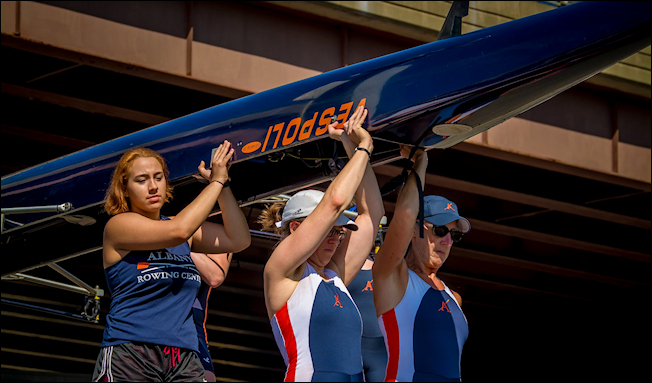 ARC rowers carry a shell from the boathouse under the highway to the dock,
building upper body strength along the way.

The two sports demand similar levels of exertion. Machine rowing burns nearly as many calories as treadmill running, and both burn more calories outdoors. For further comparisons, take a look at these articles at The Wired Runner, Well and Good, and Runner’s World.

If you assume rowing is a snooty scene full of WASPy guys, here’s the news: like running, it’s become a women’s sport. In college, rowing’s now football for females, thanks to the impact of Title IX on athletics budgets at Division 1 schools. There are about five times as many female collegiate rowers as male. As a result of all this development and spending, U.S. women dominate international rowing.

Even in the hazardous pursuit of cross-Atlantic racing, female entrants are edging past 50%. On a less extreme and more local level, ARC members and leadership are majority female. Also, like runners, they’re very friendly.

Running does have one clear advantage: cost. Rowing requires boats—not just muscle-powered, but also gas-engine launches that go out with every practice session for safety. It also requires coaches, who ride in those launches to instruct you, and fish you out if you fall in. Which, I assure you, is not a frequent event—my club is extremely safety-conscious and respectful of the river. But, you know, wet happens.

The cost per thrice-weekly, 90-minute session still compares favorably with pastimes like golf, yoga, and ballroom dance lessons. More participation this year and beyond will help control the fees, after rowing had a tough bout with Covid-19—the proximity of heavy-breathing sweaters in a shell put the kibosh on team boats most of last year. Clubs were able to keep things going with singles, but twos, fours, and eights are the heart of the sport for those of us who don’t own our own boats.

Want to get your toes wet? Two events at Albany Rowing Center this spring give you a chance. The Ice Breaker Challenge 5K pits runners vs. racing shells this month—ordinarily head to head, but virtual in 2021 on March 26-28. For more info and registration go to the club website at AlbanyRowingCenter.org and Facebook page. 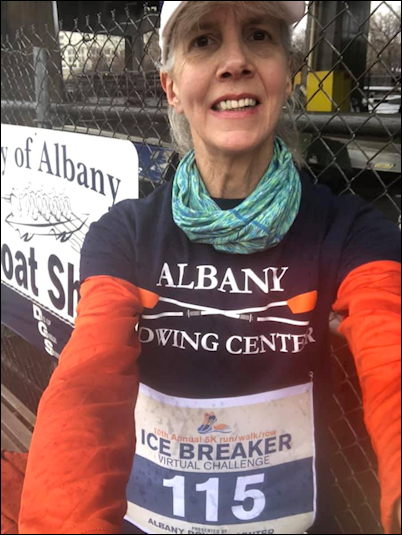 Runners are encouraged to stop by the boathouse on the way to running the Corning Trail during race weekend. ARC members will be there Saturday from 10 to noon to show off the shells and ergometers, answer questions, and seduce you with information about club programs. The boathouse is under the highway at the north end of the big parking lot on Water Street, opposite the public dock.

Your second opportunity is Learn to Row Day on Saturday, May 1, at the boathouse. You’ll be amazed at how much you can pick up in a free 45-minute drop-in session—that’s how my seduction got serious, when I first felt the thrill of pulling an oar in concert with seven other sweepers.

Our cities are bounded by rivers that we barely notice as we cross them at a mile a minute. After two decades here, I’ve decided that fully knowing and enjoying my chosen hometown means getting out on the Hudson, not just driving over it and running past it.

Stephanie Mumford Brown is Chief Wiseacre at Wiseacre Press, where she’s trying to compile the missing assembly instructions for the second half of life. As a local loyalist, she runs with ARE and HMRRC, rows with ARC, and golfs at Capital Hills.