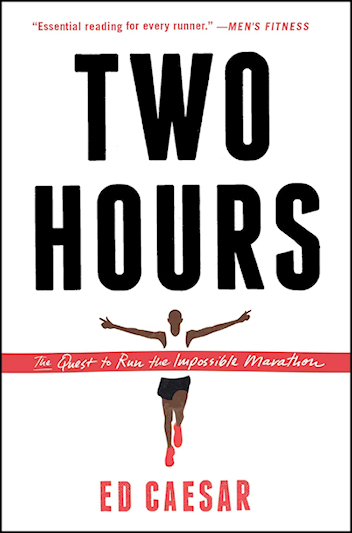 If you are looking for an excellent book to read while cooling off in the air conditioning after a run or while sitting beside a pool this summer, then consider picking up a copy of Two Hours: The Quest to Run the Impossible Marathon by Ed Caesar.

Based on all the marathon coverage in recent years, one would expect that this book would be about Eliud Kipchoge. Although Kipchoge is deserving of all the coverage he received following his sub-2-hour marathon, Two Hours chronicles the efforts of another elite marathoner, Geoffrey Mutai, who preceded Kipchoge as one of the fastest marathoners in the world.

Two Hours covered the first half of the 2010s when Mutai was regarded as the leading contender to dip under two hours in the marathon. The opening chapter describes Mutai’s quest to win the 2012 Berlin Marathon and capture the World Marathon Majors crown, with a total prize purse of over $500,000. Although Mutai did not set a world record, he won the Berlin Marathon, which turned out to be a tight duel with his training partner, Dennis Kimetto, and won the World Marathon Majors title.

If it is not clear that Mutai was virtually in a league of his own during this period, we also learn more about his fierce competitive drive. Mutai described the flow or focus of energy he experienced during a race as “The Spirit.” Mutai called on “The Spirit” many times during his years of competing and, based on his racing results, it is apparent that the spirit was strong within him.

Two Hours does justice to the sport of running by describing Mutai’s athleticism, caliber of talent, and drive. How many athletes have successfully run a mind-numbing 14:18 over 5k mid-marathon to demolish a pack of world-class runners? That’s precisely what Mutai did, beginning with a 4:31 mile deep into the 2005 NYC Marathon. That effort allowed him to pulverize the course record in 2:05:05 — a time many thought was more impressive than his astonishingly fast 2:03:02 at the 2011 Boston Marathon months earlier.

The book asks, ‘what kind of ability must this type of athlete possess?’ Well, Mutai has a heart that can maintain the demands of being over 160 beats per minute — for 2+ hours; lungs that can take in half a gallon of air per breath; and an energy system that puts out so much heat that his body loses over three liters (close to a gallon) of sweat an hour. Mutai running a marathon is like a well-tuned race car covering the 24-hour Le Mans.

Mutai appreciated his talent, but he described the feeling as carrying a heavy weight on his shoulders  “With great privilege comes great responsibility.” In a show of gratitude, Mutai put his winnings back into his village and training camps. He also made sure that some of the lesser athletes he trained with were well-positioned to earn at their own races or as a pacer for him at major competitions. His interest was in helping the next athlete reach the pedestal.

The book then takes a chapter to discuss how money first started exchanging hands at major city marathons in the 1970s. People like Bill Rodgers helped pave the way so that the economic situation for a professional runner improved (some), and we could enjoy the likes of people like Mutai today at major marathons.

Perhaps most importantly, the book covered the fact that Mutai taught us that a two-hour marathon was within a stone’s throw of reach. In April of 2011, Mutai ran a 2:03:02 at the Boston Marathon,  the fastest marathon ever run  at the time. Sadly, Mutai’s accomplishment was not considered a world record because the Boston course was not sanctioned as record-eligible by track and field’s world governing body.

Like a true champion, Mutai put his sights on showing the world that Boston was no fluke. The chapter “Kids, that was Real” perfectly sums up his focus on accomplishing the unthinkable. After Boston, Mutai set his sights on the 2011 NYC Marathon. He ran with a pack of eight runners up until 20 miles, but from miles 20 to 23, he hit the gas with 3 x 4:31 miles to shatter the pack apart. Those expecting a fade were disappointed as Mutai hammered to the finish in 2:05:06 — a new NYC Marathon record by over a minute. In one year, Mutai had run two of the best marathons anyone had ever raced. Continuing the trend, he claimed the title as the fastest marathoner in the world in 2012 and, in 2013, set a half marathon best of 58:58.

If you enjoy the marathon and the recent attention the sport has gotten from the two-hour marathon, then Two Hours is a fitting book to pick up. It’s always nice to learn where a story starts. Mutai opened the door of possibility to the likes of Kipchoge and Bekele and the fascination with the 2-hour marathon. This is a great book to accompany you as you recover, help get you motivated to train or get you excited as we await the Tokyo Olympics.

Thomas J. O’Grady, Ph.D., M.P.H., CPT-NASM (ogrady.strategies@gmail.com) is a public health professional and researcher who is a runner, hiker, and lover of the outdoors. For more information about personal training, run-coaching, or nutrition-coaching, visit http://www.ogradystrategies.com or send an e-mail.