The Untold Truth About the Hairy Gorilla Click here to relive the day. Pictures by Emily Chromczak

In late 2004, the Albany Running Exchange began work on its second event, the Hairy Gorilla Half Marathon & Squirrelly Six Mile. We had just wrapped up the first edition of the ARE Summer Trail Run Series (STRS) and envisioned a capstone trail race at the end of the summer to celebrate the STRS. To that end, the original event name was the Pine Bush Six Mile and Half Marathon, and it was planned for late August 2005.

When the Pine Bush Commission told us that the summer would be too busy for them but mid-fall would be OK, we finalized the date of October 30, 2005 and changed the name of the event to its more fun version. As fate would have it, with just 4 weeks to spare before race day, we were forced to change the venue, moving it to its permanent home high above Albany, at John Boyd Thacher (not Thatcher) Park.

In the 16 years since, occasionally what-if thoughts cross my mind. What if it had stayed a late August race in the Pine Bush? What if hadn’t had to move to Thacher Park? The irony of the serendipity that required the changes is that it’s practically impossible to imagine this event not as it is: a Halloween fun-filled bash overlooking our entire region - at a venue with ample parking, grass fields to spread out the runners, and also, working in partnership with the NYS park system, which has been a great partner to us for nearly two decades in wanting to encourage organized running events on their trails.

I met my wife at this event. To be clear, she wasn’t my wife at the time - although my affinity for literalness would therefore indicate that this paragraph’s introductory sentence is factually incorrect, as though we were somehow married before meeting. That playful prose aside (which, perhaps would come across more humorously with the requisite pauses and intonations if this were read aloud), is simply to say that Michelle came to the event in 2013, dressed in costume, and entered the costume contest.

As I was the emcee of the costume contest, we had the good fortune that the first time we ever saw each other was captured in a photo by someone on-site. While the reality is that the photographed moment lasted only slightly shorter than the few seconds of interacting, and it would be another 8 months until we saw each other again, at an ARE track practice, and then many more cycles of the moon until we were on track to share the same address, I am thankful that for all the curveballs thrown at us in developing this event to make it what it is today.

The 2021 edition of the event heralded our largest turnout in years, and marked the second consecutive year the event was held on Halloween. Indeed, while traditionally a Sunday race, in 2020 we couldn’t pass up the opportunity to move it up to the first full day of the weekend (that’d be Saturday) - a year in which race day barely got above 20 degrees, and runners arrived to the course covered in snow.

For this year’s race, the temperature was roughly 35 degrees warmer than 2020, but participants were treated to a soaked course; not the majority of it, to be accurate, but for the numerous sections that were wet, they were the wettest they’ve ever been in our history of running at the park. 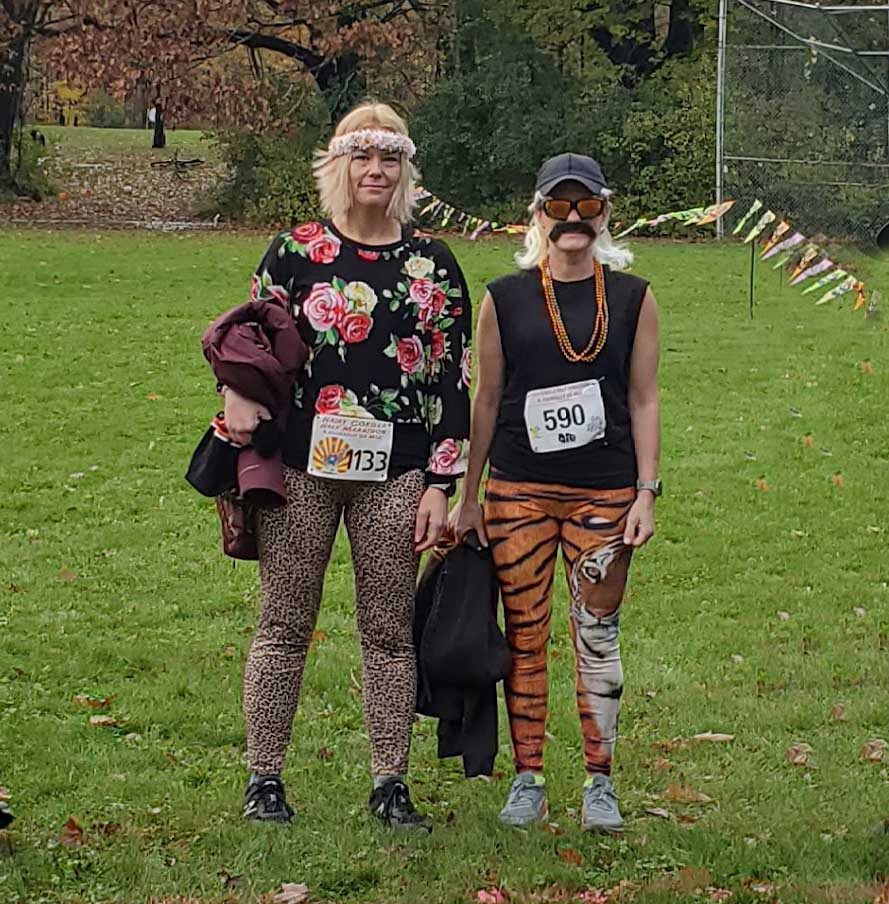 And our participants were up to the task. With many in costume, including the costume contest winners wearing the pandemic-era costumes of Carole Baskin and Joe Exotic, the hundreds on-site took it all in (muddy, if not very muddy) stride, basking in the freedom of movement. Of having control; the ability to push when desired. The ability to slow down, and even stop to take in the beautiful sights along the way; indeed, many of our racers stopped during the race to take pictures at the Hang Glide Cliff. And the joy that comes from pushing ourselves physically that is not reproduced in any non-physical pursuit. 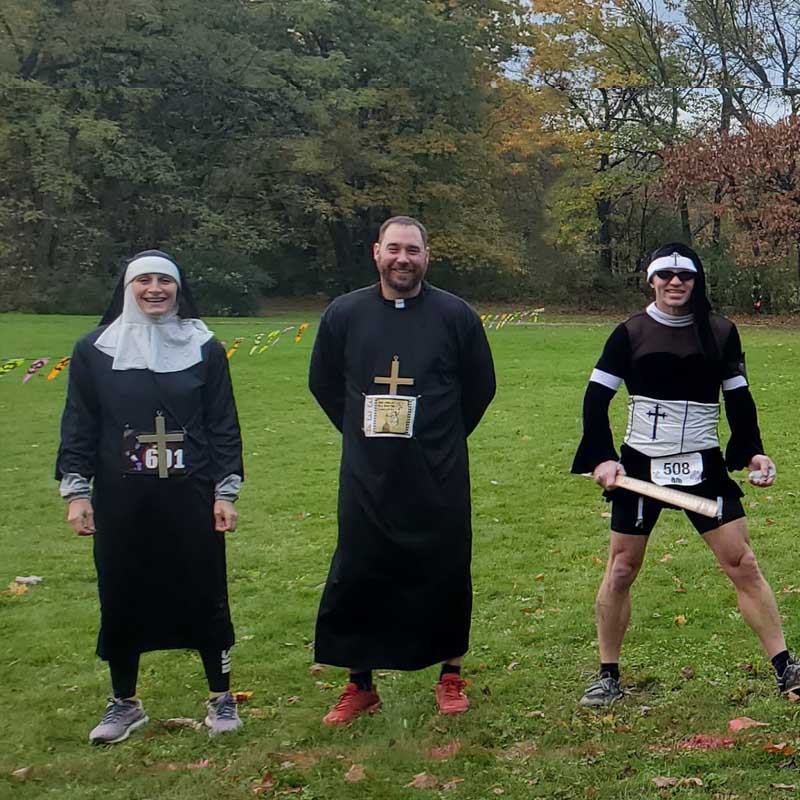 For let us all remember that most of our daily lives - even us, as athletes - is spent in relatively sedentary pursuits. Even if standing up at work, even if moving about throughout the day - how much time do we all spend moving where it is solely that movement that is the end goal? And what percentage of our time is spent doing it with others while dressed up on Halloween?

That last qualifier reduces this unique experience to just one day each year, and for the past nearly two decades, it has been the ARE and ARE Event Productions’ greatest joy to give life to that opportunity that nearly 4,000 have experienced since its beginning. It’s also our only event that gives out an actual award for the best primal scream (AKA gorilla impersonation), and gosh darn it, sometimes it feels quite good for all of us to give off a scream and then go sprinting into the woods. There’s nothing else like it. Our columnist Stephanie Mumford Brown attended the event,
and her pictures and observations are to follow. "Avocado – I don't know how he ran in that thing, but I think he did the
whole race in it." 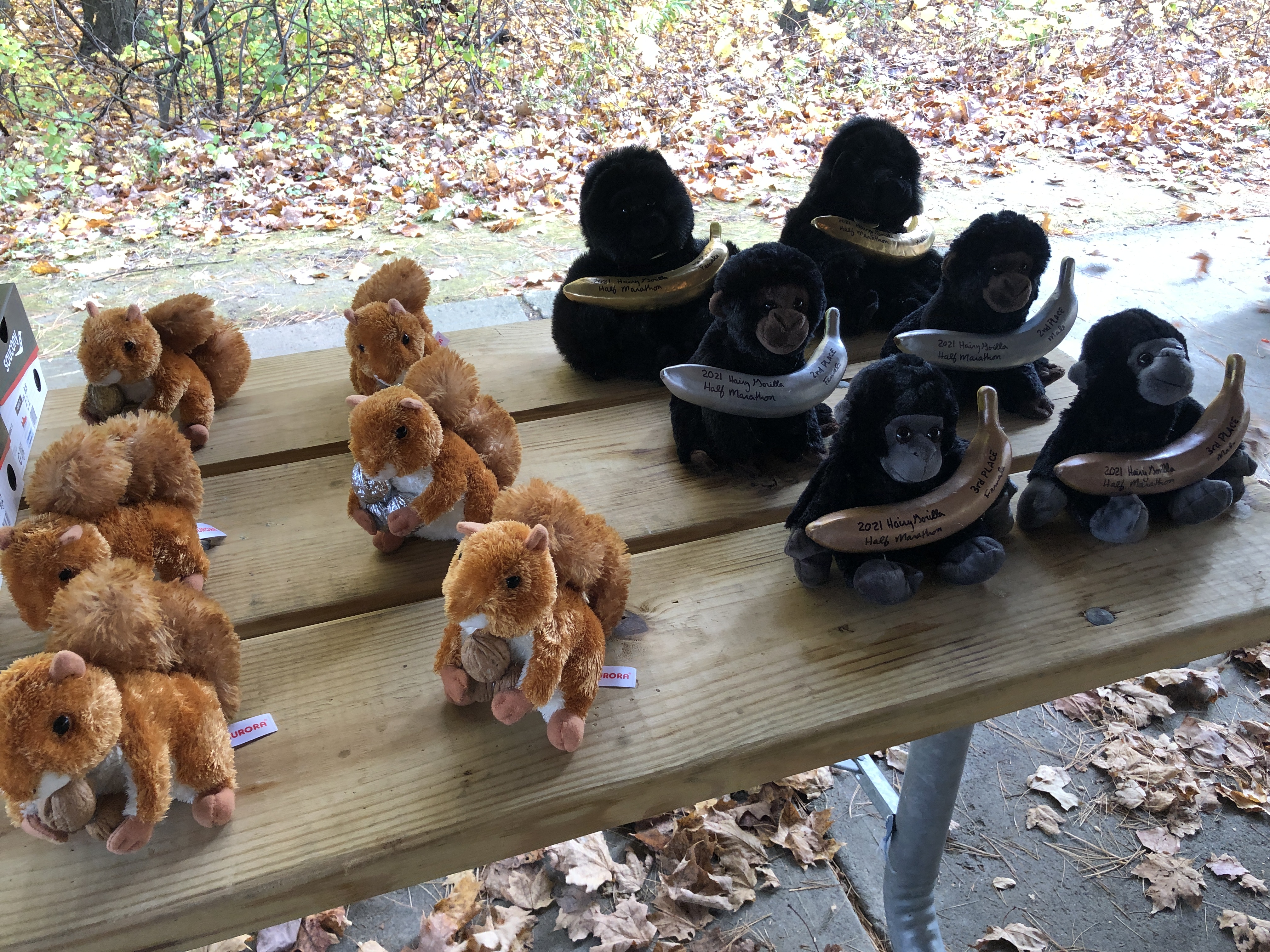 Start thinking of your wacky costume now for the Hairy Gorilla October 31, 2022!