JFK 50 Mile Ultramarathon: So Close Yet So Far 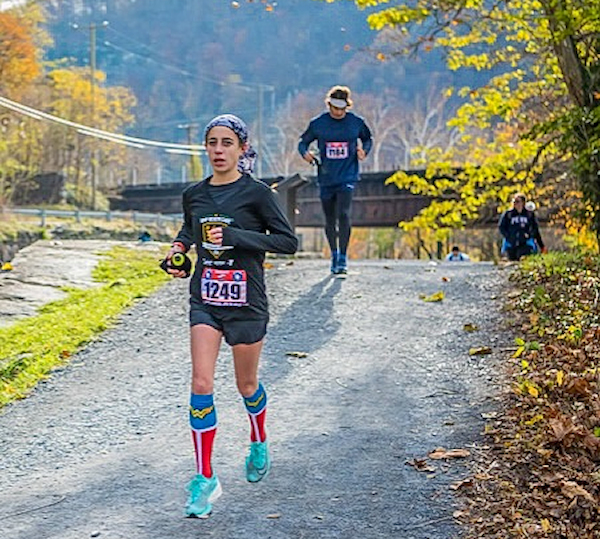 Ultrarunning was not something I really envisioned moving up to. Over 15 years I have been running road races from 5k to marathon distances. However, when registration opened for the JFK 50 Mile ultramarathon, I gave it a second thought. My boyfriend Dave and his brother Taylor had been throwing the idea around about running this race, so I figured, why not join in on the fun. The JFK 50 is the oldest continuously run ultramarathon in the US, with the first race being run in 1963, and it is a highly regarded race in the ultrarunning world. Starting in the town of Boonsboro, Maryland, crossing a portion of the Appalachian Trail, the C&O Canal towpath and ending in the town of Williamsport, Maryland, the course offers a variety of terrain, mixing steep uphill climbs, semi-technical rocky trail, flat gravel towpath and paved roads. It seemed reasonable enough, the thought of running 50 miles at a slow and easy pace as opposed to a fast pace (as I usually do) seemed like a no-brainer. It should be simple, like a nice long slow jog. I was coming off racing the Stockade-athon a week prior, with another race 2 weeks before that, so the concept of a “no pressure” run was looking pretty nice.

That being said, I did zero trail training leading into this, as I was so focused on training for the previous races, a mistake that I would find later, on the course, to become a problem. With that not being a thought or concern, Dave and I set off to Maryland to meet his brother Taylor to conquer this race. The morning of the race was cold at 28 degrees. We all arrived at the start near dawn, and it was dark with just a hint of daylight. Over a thousand people were gathering at the starting line, taking over Main Street in Boonsboro. Energy filled the air as we stood and waited in anticipation of the start. Then finally with the sound of the horn we were off and running.

Dave and I started off together. Starting with the 5 miles on the road, I thought, “this should be all right,” as we left town. We then encountered a small uphill followed by a downhill. Perfect! We were flying. Just as we were falling into a rhythm of a nice relaxing run, the real race started, as we faced a steep continuous climb on the road leading us to the start of the Appalachian Trail. It was five miles of steep uphill with little reprieve. Taking it easier than I anticipated, Dave pulled ahead of me and I cut back on pace, trying to move along steadily, suddenly being slammed with the realization that in order to finish this thing I would have to run this race slower and with more strategy than I initially thought.

After surviving the 5-mile climb, we finally reached the trailhead where everything appeared to have leveled out. The uphill was over with and for about a half mile into the trail it seemed as though this portion would be a piece of cake. How wrong was I! Soon after just beginning to feel comfortable again, the rocks and roots started, compounded by a thick leaf cover, which left unknown where you were stepping and what you were stepping on. Now I was really regretting not having put in any trail training. The run/walking, hopping, and swerving had officially begun. At this point I was on my own. Dave had disappeared, and Taylor had taken off much further ahead of the both of us. It was a slow slog with intermittent sections of actual running, followed by more maneuvering around rocks and roots. I had several wobbly ankles and near misses of falling over completely but survived the trail for the most part.

Unfortunately for others, there was a lot of damage, ranging from broken ankles to dangerous falls. A woman not that far in front of me tripped and fell face first into a rock, tearing her head open. Sadly, for her, the race ended there, as medics removed her from the course. I was beginning to think that I was not doing so badly after all. I was almost off the trail, had not sustained a major injury, and was doing OK. What I did not know at the time was that Dave had taken a spill “finger first” into a rock, which left him with a broken fingertip. That, however, did not stop him; he kept on running.

As I approached the end of the trail where it transitions into the C&O Canal towpath, I was feeling pretty good. I had survived the trail was and now on to the “easy” part. I knew there was one last steep decline before reaching the road, but what I did not expect was a series of steep and rocky switchbacks as the grand finale to the rock-filled, leaf covered, ankle-busting trail I had just exited. My descent from the trail was slow and careful, back and forth down a narrow rock-filled path, turning sharply back and forth until finally reaching the road! After a quick sneaker change out of trail shoes into road shoes, I took off on the path. It felt so easy in comparison to what I had just done, so I took off flying (much too fast). 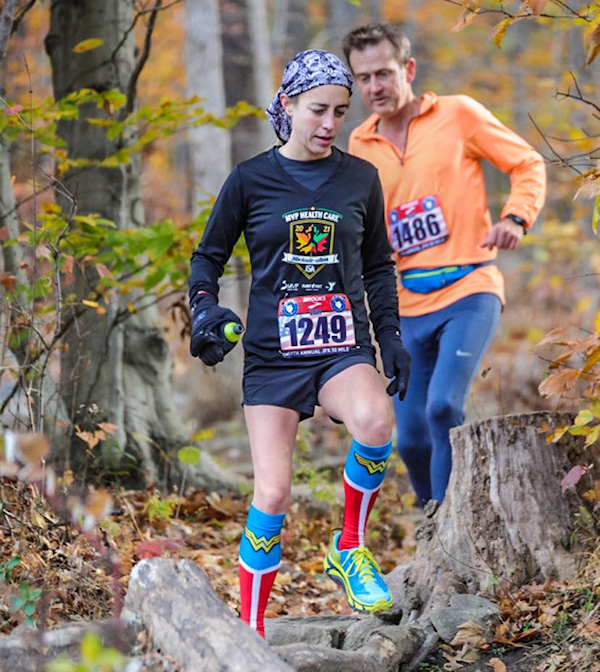 Five miles into the towpath section, I realized that I had a long road ahead and needed to slow down. The path for the most part was uneventful, stocked every 5 miles with aid stations filled with food, candy, drinks, and gels. You name it, they had it, even a dancing Santa Claus for diversional entertainment.

Everything was going according to plan until I started feeling a slight ache in my right hip. As any good runner would do, I ignored it (must be a normal ache due to all the running). I made the mistake of running consistently on the towpath with minimal walk breaks up until about mile 26. At that point, I slowed and started alternating a few miles of running and some short walk breaks in between. I started utilizing the aid stations for water and candy after breezing by most of them earlier in the race. Hopeful that the pain would subside, I continued with alternating running and walking. However, the pain kept getting worse. I made it to mile 35 and suddenly it intensified, and my hip and leg felt out of coordination. It was getting more and more difficult to move my right leg. Denial set in and I continued to push for now, at a very slow jog alternating with walking.

I spoke to several different runners during those last 5-ish miles between miles 35 and 40. Most were concerned, offering me Advil and electrolyte gels, because apparently, I was not looking so hot with my more than apparent painful limp and look of agony on my face. As I was approaching the final aid stop, for me, on this course a concerned runner who saw me struggling had apparently run ahead and notified the medics that I was dragging along. Coming into the aid station I was stopped by the medics, and they swiftly picked me up, took me off the course, and put me in the medic van for evaluation. There it was discovered my right hip had fallen out of alignment. With my approval, the medics were able to “realign” my hip, which was painful for a second but a sore relief afterwards. 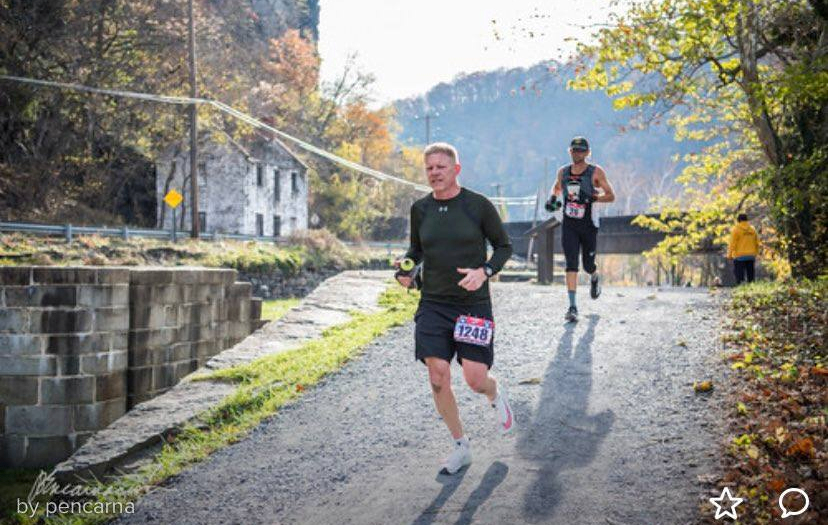 Sadly, the race for me had ended there. I was 10 miles from the finish after 7 hours and 30 minutes on the course. It was so discouraging to be so close but so far. I was then transported back to the finish line to reunite with Dave and Taylor. Dave ran a great race despite the broken finger, finishing in 8 hours 19 minutes. Taylor was phenomenal. His final time was 6 hours 35 minutes, earning first place in his age group and 20th finisher overall! Amazing! 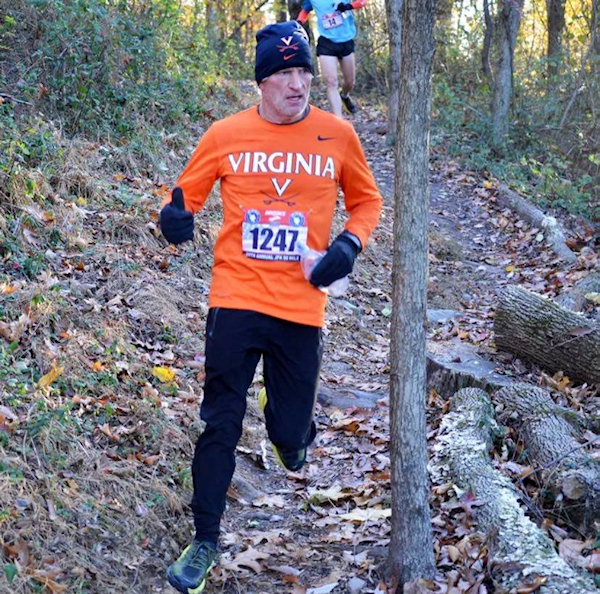 As sad as it was for me not finishing, looking at it from the perspective that I ran 40 miles in one day is still an impressive accomplishment, especially since I was moving on a dislocated hip in the last five. My initial reaction was “I’m not doing this again!! Will be sticking to roads and normal race distances.” However, after coming home and getting checked by the doctor, receiving the OK to run again after an MRI 5 days after the race was unexpected. I was lucky and sustained no major damage, so after tentatively doing a couple of indoor treadmill runs to test things out, I’m happy to report I’m back to my normal running self. This got me thinking that I could have finished had it not been for the injury. Energy-wise I felt fine, and there was that nagging thought that I left a race unfinished, especially an epic race like this one.

So, despite all the hardships leading to my forced DNF, I’m seriously contemplating signing up for next year’s race to complete what I came so close to doing this time around. Then I think I’d be fine with shelving my “ultra marathon” shoes and going back to my boring old road races. 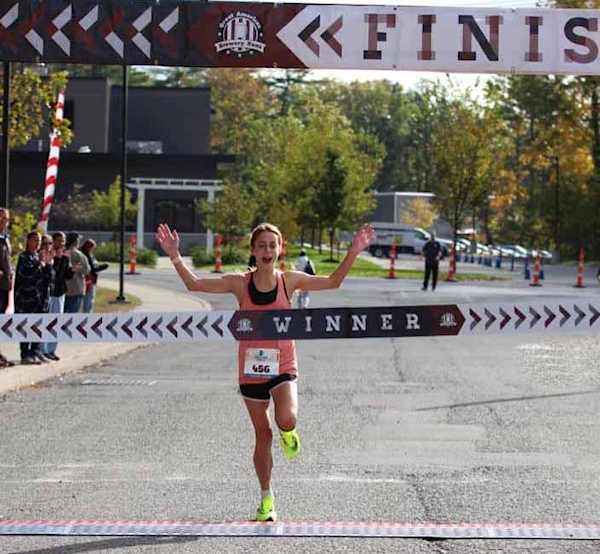