Tuesdays at the Track 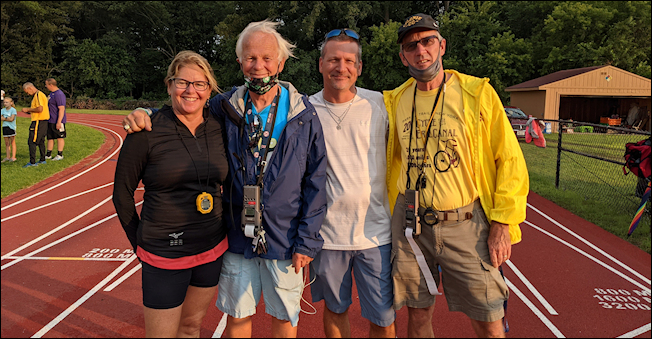 View from the Track (Lisa)

What a crushing way to end the season. After weeks of chipping away at her 400 meter time, the outdoor track season came to an abrupt end for the Niskayuna runner with a non-qualifying season’s best performance of 60.3 seconds at State Qualifiers.

“All I need is one more race!” the young sprinter from Niskayuna bemoaned to her coach. After chasing the sub-60 milestone all season, how could it all be over now after coming so close?

Thankfully, the wise coach had a helpful suggestion. “Actually, you may be in luck,” he told her. “Colonie hosts Tuesday night track meets all summer long. You could try to break 60 there.”

This conversation took place in 2003 and the young sprinter was me. But really, it could have been many of us over the past 52 years that the Colonie Summer Track meets have been held. A chance for redemption, an opportunity to chase new personal records, or simply a way for runners to come together during what would otherwise be the “off” season - the Colonie Summer Track meets have been there, year after year (with the exception of 2020, thank you COVID), ready to serve whatever purpose you want them to be.

A number of articles were written about the Colonie meets back in 2018 for their 50th season. They’re available online if you wish to read more, but to put it simply: we owe it all to a pair of local brothers. Frank Myers, the long-time coach of Colonie track and field (currently in his 53rd year), and his brother Don, a retired superintendent of the Colonie Recreation Department, held the first meet on July 8, 1969, just days before man first landed on the moon. A total of 18 male competitors participated in the inaugural event. 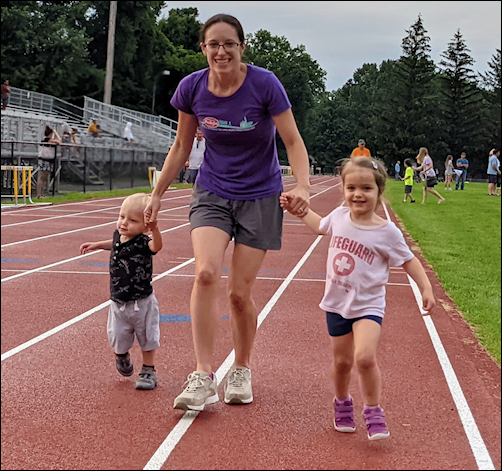 The numbers have grown as the years ticked by, with the “running boom” of the 80s bringing in a significant surge of participants. Given the recreational status of these meets, what has been remarkable has been “the outstanding quality” of the competitors, as Frank Myers, who primarily runs the meets these days, describes. This includes three males going 10.4 in the 100, 15 males under 48.9 in the 400, and an 8:58.5 performance in the two mile. On the women’s side, a 4:42 mile, 10:37 two mile, and three performances under 54 in the 400 meters highlight the leaderboard. 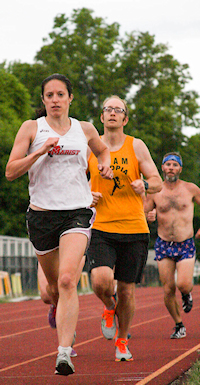 While I was not one of those sub-54 runners, I managed to break 60 at the first Colonie meet I attended. There’s no record of it, as only the winners were recorded, and Colonie standout Stacy Gregory ran a 59.2 to my 59.3. I never again captured a sub-60 time, but I owe that lifetime best to the opportunity the Colonie meets provided. They became a fixture of the summers; a social gathering spot where my friends and I could also get in a worthwhile workout.

Over the next four years, a number of my PRs - the 100, 200, and the mile - were also set at Colonie. For me, what made it was the competitive environment without any pressure. My adrenaline would flow but I managed to avoid the nerves that always came during high school and collegiate competitions. The folks there - volunteers and runners alike - were friendly, supportive, and happy to root for you whether you were running a five-minute or 15-minute mile.

Little did I know at the time, while my teenage self was sprinting down the Colonie track, my future husband was just a stone’s throw (or perhaps I should say “discus throw”) away in the throwing fields. Back then, I’m sorry to say, I never glanced in that direction (I’m sure many runners aren’t even aware that throwers compete at the summer meets). But on our first date in 2014, after meeting online, Lance and I quickly bonded over numerous things, especially our years of frequenting the Colonie meets. That shared connection instantly made things feel more natural, and as our relationship grew, we enjoyed supporting one another in each respective discipline. While at two opposite ends of the track and field spectrum, we could appreciate the hard work the other put into the sport. 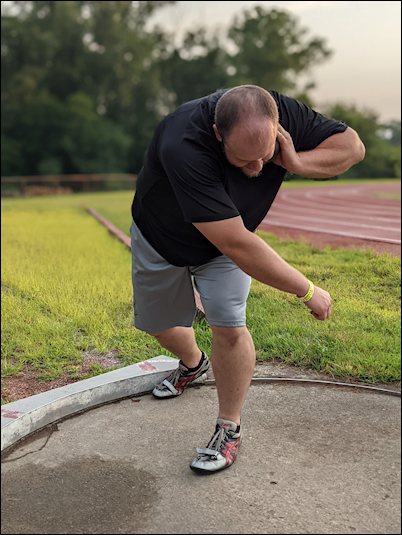 View from the Field (Lance)

I first heard about the Tuesday night meets during my freshman year of college at RPI in 2003. We talked about what we would do over the summer to stay in shape, and a few of the local throwers suggested we meet up for the Colonie Summer Track meets. I was shocked I hadn’t heard about these meets previously, considering I grew up in the area (Broadalbin-Perth High School). But I eagerly listened because at the time, outside of the Empire State Games, there weren’t many options for throwers (or field athletes in general) once the scholastic season ended. The same is true today - the Colonie Summer Track meets provide one of the only local opportunities to compete in the field events.

Each year, the first meet felt like a reunion. The throwers gathered to talk about what transpired over the previous year. There are the usual stories about new personal bests and lifting programs and general life developments like new jobs, children, or pets. Once the competition begins, things get more serious, but the atmosphere always remains light and positive. For many of us, this was our only time to throw and be coached (by each other). So we took full advantage of the time given to us.

I have seen many local throwers grow from young kids to collegiate athletes and beyond throughout the years. One such athlete was Rudy Winkler. If you follow the Olympics, that name may be familiar to you. He is the current US Men’s Hammer Throw record holder (82.71m) and represents the USA at the Olympics for the second time in the event. I first met Rudy at a Colonie Summer Track meet in 2009 after he had just finished the eighth grade.

I learned that Rudy was interested in throwing the hammer, but since it was not a scholastic event at the time, he wasn’t able to practice it at his school. He had, however, built a hammer circle at his house in Averill Park and practiced there. The Colonie Summer Track meet did not include the hammer throw due to the damage it caused to the field. But, on occasion, we drove to SUNY Albany or RPI after the Colonie competition ended for practice and an “unofficial” competition. 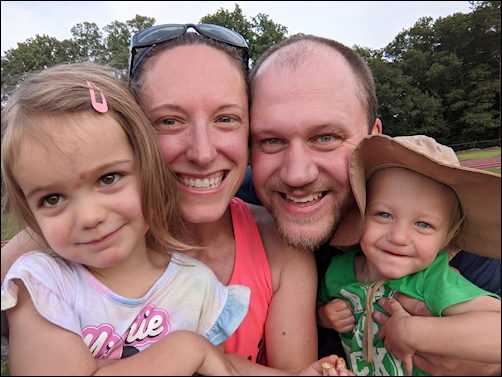 Over the summer of 2009, I saw just how quickly Rudy picked up on the nuances of the hammer throw. His form, strength, and the distances he could throw drastically improved. He sharpened his skill and determination through high school and college and is now among the top hammer throwers in the world.

Frank Myers and the Hudson Mohawk Road Runners Club have faced many challenges to get the meets up and running in 2021 due to the pandemic and insurance requirements that mandate they follow the latest COVID restrictions. Challenges have been especially significant because children under 12, welcomed at the meet, are currently not eligible for the vaccine. Nevertheless, the extra effort by Myers and HMRRC has allowed the Colonie Summer Track series to remain a family affair.

For the first time, we attended and competed at the meet as a family of four. Three-year-old Addie and one-year-old Will were delighted to participate in the kids’ 50m and 100m races and look forward to going each week. While many families are newer to the meets, many others, like ours, participated as youths and are now passing on the tradition to the next generation.

For Frank Myers and his dedicated team of volunteers, that’s the greatest reward. To quote Frank: “The best thing about the program we run is to see the youngsters running down the lane with a big smile on their face.”

Note: The Colonie Summer Track series will hold its final meet on August 10.