Froggy Five Mile and Hard as Hell Half Marathon 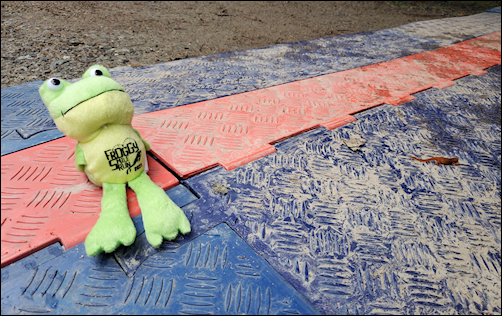 The ground was damp beneath the overcast sky as I unhurriedly entered the woods a half mile down the road from White Pine Lodge. For the first time in my 14 year history of marking the Froggy Five, I was doing so both under no time pressure and also without running. Indeed, I simply was going for a walk.

Another marked change was that I was alone in doing so. Yes, John Kinnicutt was also present helping with setup and marking another section of the course as the daylight faded on the day prior to the race, but in the most literal of ways, I was alone in the woods.

My first trip to the University at Albany’s Dippikill Wilderness Retreat was 20 years ago as a member of the UAlbany track team. The coaches brought us up there for a day trip as a team bonding experience. I remember little of that trip, other than generally finding it a very cool place. The Albany Running Exchange was created a year later, and one year after that, we held our first weekend club getaway there in December 2003. About 20 of us went, and much to our excited surprise, we awoke after our first night there to two feet of enchanting fresh snow. That early winter trip became an annual tradition until COVID-19 prevented it in 2020.

In 2006, we debuted the Adventure Race at Dippikill. In 2008, ARE Event Productions (AREEP) launched its summer Trail Running Camp there, and in 2018, Michelle and I were married in its White Pine Lodge. Being alone at Dippikill, even briefly, was a foreign feeling. In the quiet, I thought about the countless trips and experiences I’ve had there, and also about the specific reason I was there at that moment. 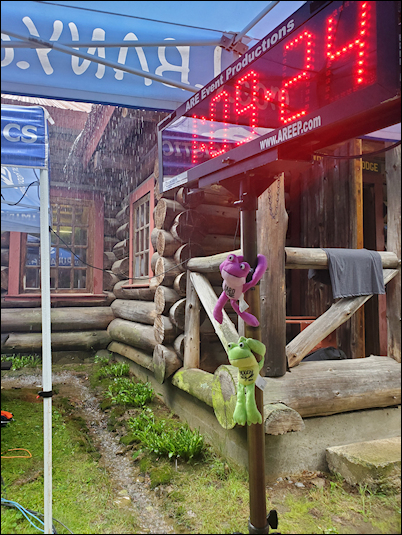 The Froggy Five Mile was the last race we created before I quit my job as a high school teacher to pursue AREEP full-time. Its existence marks a symbolic turning point for the company and our operations; for the two summers prior to its birth, I traveled around the country, ultimately with the intention of creating a series of weekly running tours of the National Parks to debut in summer 2009. Two weeks before the debut of Trail Running Camp in 2008, I had no choice but to cancel the final planning trip for the National Park tours because of how much work remained to ensure that camp would be a success. Sure enough, the camp took off, along with AREEP’s client list, going from 12 events in 2007 to 80 in 2009, and both the National Park tour and creating new events took a backseat as we focused on serving as a vendor to races.

As such, the continued running of this event provides a nostalgic connection to the past, along with the annual fun of a low-key race that is also quite difficult to run. Indeed, the route succinctly packs a little bit of everything into its five miles, including ascending a modest Adirondack mountain. I was a participant in the event for its first 12 years, which is the longest annual streak I had of racing an event. Alas, in 2020, with the addition of the Hard as Hell Half Marathon and the need to be fully available throughout the event with respect to COVID-19 protocols/regulations, my streak of wearing a bib at the event ended.

I woke up on race day inside the lodge at 3:15 AM.  And yes, it was raining cats and dogs as they say.  Weather reports a few hours earlier made it clear that it would be a wet morning. As an event producer, there are many reasons why wet weather is our enemy, but the most devastating has nothing to do “directly” with the participant experience/attendance. Instead, it’s the impact on electronic equipment used at the event, from timing systems and clocks to sound speakers and more, which can be destroyed by getting wet.  We’ve had a handful of issues over the years with raging storms, including one time when a race venue became significantly submerged.

We had a couple of tents and the use of White Pine Lodge and made some minor modifications to maximize the protection of our equipment.  Otherwise, we were pretty excited about what a unique experience awaited the runners.

Not only was ample rain coming our way, but considering that it has rained nearly every day for 2+ weeks, the trails were already wetter than I’d ever seen them in 20 years.

Even though more than 25% of the pre-registrants chose not to attend, assumingly because of the weather, the 2021 race marked the biggest turn-out in the event history, with 38 starting the 13.1M and 50 in the 5M.

The rain took a short reprieve as we sent the runners on their way, but in a short time, the sky was unloading buckets. I felt bad for the volunteers standing out in it; indeed, while they may have brought umbrellas on their own, I realized that I forgot to pack tents for the course. Volunteers make an event happen.  They also spend the most time outside in the elements (i.e., their job isn’t done at any specific location until the last person reaches there). I appreciated their service on this day, and most humbled and thankful they were there, and with a smile.

We moved the 5M to start only 30 minutes after the 13.1M for this year’s race (instead of one hour like it had in 2020), which helped with logistics and made it more engaging for those spectating. After the initial half-hour lull after the 13.1M started, the 5M began.  And one mile later, they were running back past the start area, down the hill heading for the woods. As the last of the 5M runners passed the start area, the leaders of the 13.1M came through that same area, having completed 7.4 miles of their race. Twenty minutes later, Aaron Major came barreling into the finish area, notching the men’s win in the Froggy, less than a minute ahead of Alex James and Frankie DiSomma. Shannon O’Meara would get her second consecutive Froggy win, leading Nicola Macneil and Danielle Moroukian.

In the Half Marathon, a close race unfolded between Richard Messineo and Erich Nieman, with Erich having a slight lead on Richard coming through the start area at 7.4M. Still, Richard eventually gained the advantage in the second half. Barely 40 seconds would separate them. On the women’s side, like Shannon in the 5M, Lauren Carnahan won for the second year in a row, with Tara Seigle finishing second a few minutes later.

As the procession of people running on the otherwise lightly traveled Dippikill road continued, children of participants played in the newly formed rivers (AKA storm run-off).  One of the participant’s mothers, Kathy Majer, dutifully assisted with the water stop for the 13.1M near the finish.  Unfortunately, during the brief moment she went into the building, she missed seeing her son pass by.  But alas, she was there to welcome him home as he finished and snap a picture showcasing why the longer race at the event has its name.

Smaller events are naturally a more intimate experience.  And at this one, where simply finishing is an accomplishment, it was especially meaningful to see everyone share in the camaraderie of “surviving the storm.” Indeed, we’ve never had conditions quite like this, and for that matter, never before has it been quite the story for our racers to tell. They earned their frog medals on July 18, 2021.