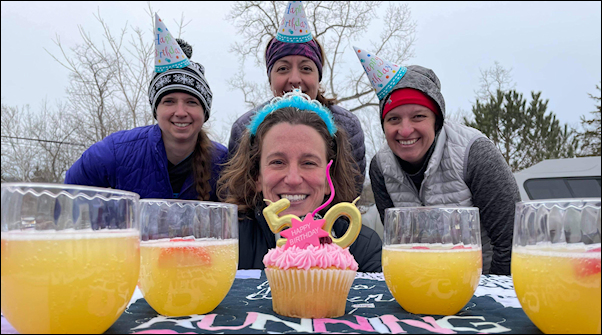 This morning over breakfast, I contemplated today’s 5K. You see, I’m currently marathon training, and my coach likes to throw in little “assessments” - like this 5k - to ensure that I pace my training runs to my full potential. While I love a PR, there is a bit of dread when I anticipate what the pace calculator will tell me to do.

I train with the team at Nark Running & Strength (NRS), a diverse group of people, all running for different reasons.  There are some truly gifted athletes who are focused on the win. Others, like myself, who will never know what a podium feels like, run for the challenge and to reach personal goals.  What is universal among the team members is their unwavering encouragement of those who participate in the sport. 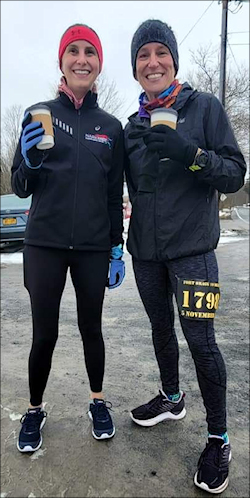 I am an adult-onset runner who started on this adventure on a challenge. It turned out to be exactly what I needed in my life!  After a difficult divorce, I struggled to understand who I was and where I was going.  With two young children and a busy job, I needed something to give me long-term happiness and allow me to be successful in my two roles.

After settling into a new house, my kids and I got a dog. Not understanding what I was getting into, I wound up with an English Shepherd -- a very active, very smart, and in-desperate-need-of-a-job kind of dog. I started by taking the pup for walks, then hikes that got longer and longer. I soon realized that I loved being active in nature.

I bought a tent.  The kids, dog, and I started camping. My new-found active lifestyle empowered me with more confidence in all aspects of my life.

A few years later, I married the man who had become my hiking partner and co-adventurer.  He had always been athletic, and no physical challenge was too much for him. One night he mentioned that there was a triathlon coming up near our hometown and suggested that we do it. I laughed, until I realized he was serious, and laughing ceased immediately.  A friend agreed to do it with us.  So -- dang! We signed up for a triathlon.

Despite fearing that I would die running a mile for the first time and having to relearn how to ride a bike, I muddled through the Hudson Crossings Triathlon that year.  It was such a fun experience that I signed up for another, then another. I bought a road bike, learned to clip in, and while I continued to be terrified on the bike and fell over every time I stopped, I set my sights on longer distance events.

Sometime after, I met with a new neurologist to monitor my multiple sclerosis.  When the physician learned of my new activities, he cautioned “Oh, honey you had better be careful!”  For real?  I sat in front of him in the best physical and mental shape of my life and he suggested that I should NOT pursue this active lifestyle? Challenge accepted, sir! So I “fired” the neurologist and started training for a half Ironman with my primary care physician’s support.

Two years later, I completed a half Ironman training program and showed up strong to the Lake George Triathlon Festival weekend. Feeling fantastic, I completed the Olympic distance race on Saturday and started the Big George Half Iron Distance Race on Sunday (those who complete the two races are called “King George racers”, although some call them “crazy”).  As sometimes happens in the sport, unseasonably cold temperatures and unrelenting rain caused the race directors to stop the race and pull all athletes from the course. It was the right call, but after such an intense training cycle, I was devastated to not be able to complete my first 70.3! 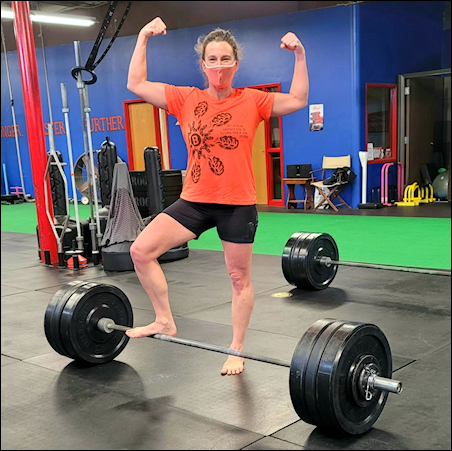 After this disappointing end to the season, I decided to take a break and “just” run. Ha! A new community discovered and never to be without a challenge, I started chasing that elusive sub-30 minute 5K. With the encouragement and pacing help of my BRF (best running friend), I hit that goal and kept going. A half marathon wasn’t enough so the next year we did a marathon together!

There is a lesson here. Twenty-six-point-two miles is a long way to run. I decided that I needed to take this run training more seriously if I was going to do another marathon and not die in the process. Enter Mat Nark and the NRS team. In addition to providing very patient run coaching, Mat convinced me that strength training in his gym would be beneficial. I wasn’t convinced, but when I observed women I was running with doing pull-ups with weights strapped around their waists, I had a new challenge!

Over the past three years, I’ve worked out and run with many inspiring people on the NRS team and in the larger running community. I’ve developed some super close friendships and know we will adventure together for a very long time!

I turned 50 this year and am in the best physical and emotional shape of my life, thanks to the support of my family, friends, and teammates. I’ve already accomplished several goals, including a pull-up for every decade of life, a deadlift of two times my body weight, and I set a female gym record in the process. I completed a 50K trail run and am planning on a 50-mile race this fall because, well, I’m FIFTY!

So, this brings me back to this morning and my 5K. I finished breakfast, pulled my slightly graying hair into a ponytail, tightened up my Garmin, and headed out the door. The Frosty 5K turned out to be just that! But I have a shiny new PR to be proud of. Six years ago, a 25:33 5K was out of reach. But today, I am encouraged and inspired by like-minded people who push themselves to be better and push me to be better too! By following my doctor’s recommendations (and not that old neurologist!), staying healthy, and keeping a community of positive people around me, there isn’t much I can’t do.

I don’t write this to brag or seek pats on the back. I share it to encourage anyone - of any age and ability - to surround yourself with people who challenge you to be the best “you” possible! Though I’ve reached my 50th year chronologically, the mental and physical benefits of being with others who motivate and inspire proves that 50 can be the new 30!