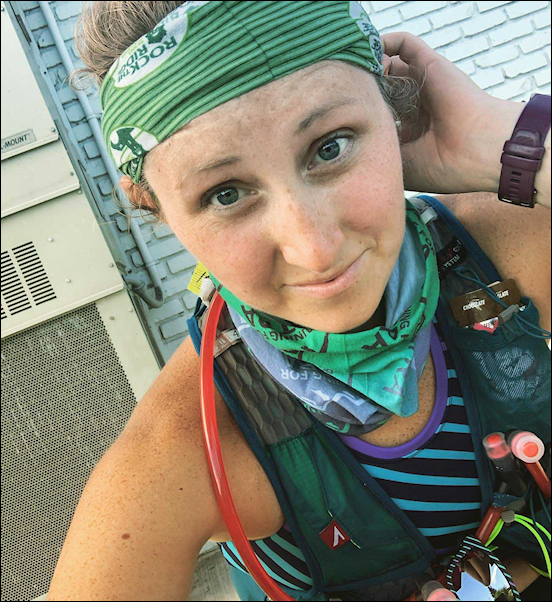 I put my head down and picked up my feet, my legs rebelling with each step and pain shooting up and down each leg. We were at mile 52 of our 55-mile training run. The day had gone well for the most part. I knew this was only a small preview of the pain I would endure in just 38 days when I toed the line at the Yeti 100 Mile Endurance Run. 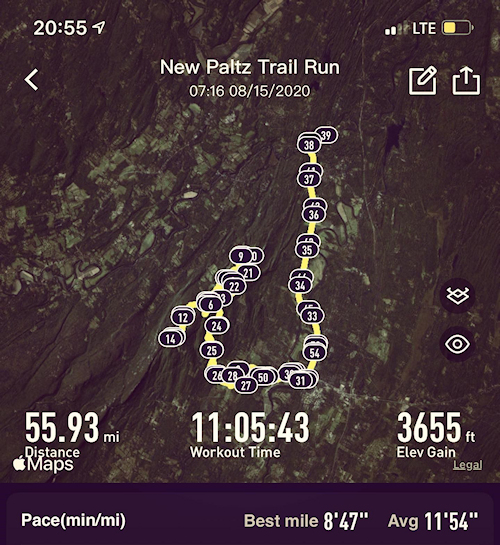 My mind started wandering. I thought about the beginning of my ultrarunning, back to a time in my life when I was married to an abusive husband and scheduled my runs when he wouldn’t be home. I thought about how I stood up and got out of that situation, how I walked away and made a life for myself where I was safe. I thought about how I fought for that divorce and, less than a week after it was final, ran my first 50-mile race at Rock the Ridge 50 Mile Challenge in the Shawangunk Mountains near my home. I trained mostly on the treadmill for that race because it was winter, and the cold air caused severe asthma attacks, something I suffered from since childhood. I did all that, so I knew I could finish the last few miles of my long training run.

After I ran my first 50-mile race, I was hooked. I have been a runner my whole life, running my first 10-mile trail race at ten years old with my mom. I never ventured past the marathon distance until my divorce and needed something bigger, something physically and mentally harder where I could find myself again.

I ran the Catskill Mountain 100K Road Race & Relay that same year and then a couple of 50ks in the fall. I wanted more. I knew I had more in me and wanted to find that line and push it farther.

When racing the Albany Running Exchange Adventure Race last December, I met Jason. We started talking about running a 100-mile race. He suggested The Yeti 100 Mile Endurance Run in Virginia. The timing of the race fit in with my other races, so I entered the lottery and got a spot. 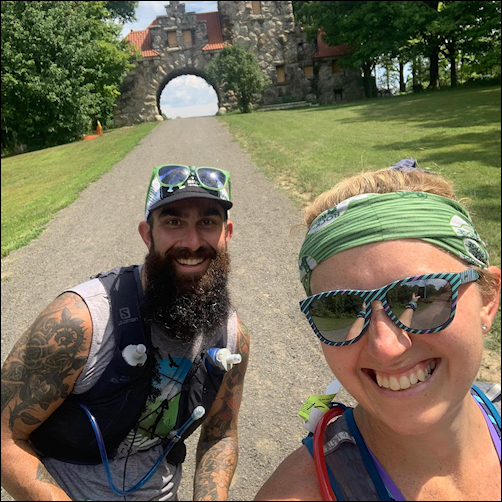 I work 72 hours a week as a paramedic: three nights, and one 36-hour shift. So, I run most of my runs sleep deprived. The week leading up to our 55-mile training run was no exception. On Monday, my body hurt; I felt dizzy and wobbly the whole 6 miles of my run. By Friday, I worked hard to convince myself to just get out there, start slow, practice fueling, and see how far I could get. But by Saturday morning, I woke up feeling fantastic!

We drove to our training route and parked in a small lot two miles outside of the Mohonk Preserve. We filled our packs with water, Nuun, and fuel, and started running. I brought a map of the course used for the Rock the Ridge 50-Mile Challenge. The plan was to run the first leg, then meet my parents at an aid station 12 miles in. We got onto the Preserve and, almost immediately, we were lost. I called my mom from the trail to confirm our route and we kept going. We reached the top of the first climb, which is the gatehouse to the Mohonk Mountain House, took a left instead of a right, and soon realized that we were on the wrong path. Luckily, we were able to navigate to find my parents, but we ended up two miles short for the first leg.

We refueled with boiled potatoes and chips, topped off our water, then went for a quick 10 miles out and back around the Mohonk Mountain House Lake. Running around the lake was gorgeous, and it was so tempting to jump in! But I kept reminding myself we had over 30 miles of running left. 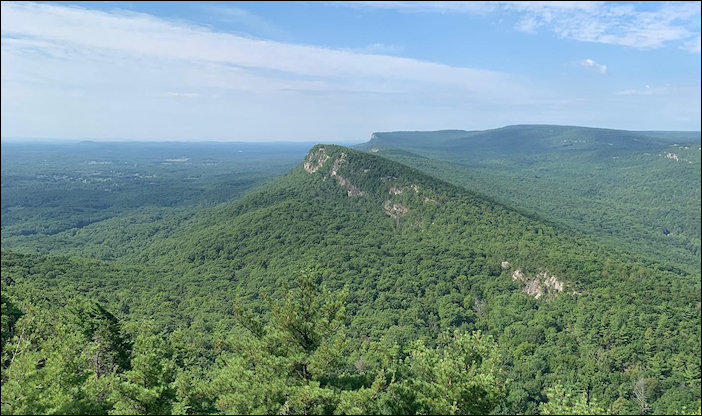 After two loops around the lake, we met back up with my parents and refueled. My mom rubbed Squirrel’s Nut Butter all over my back, where my pack was tearing it up. We headed back out.

When we left the Preserve and the last two miles of the River to Ridge Trail, the tree cover was gone, and the sun beat down on us with a vengeance. We both staggered under the heat. Once we got back to our car, we refueled again, cooled off with towels soaked in ice water, and were off to run the last 25 miles on the Wallkill Valley Rail Trail.

We both mentally started going into a dark place when we hit the rail trail. For the next few miles, there was no talking, just the sound of our feet and the slosh of the water in our packs.

Finally, we saw the trestle crossing at Rosendale, which was our goal. We stopped and took some pictures: it was beautiful. 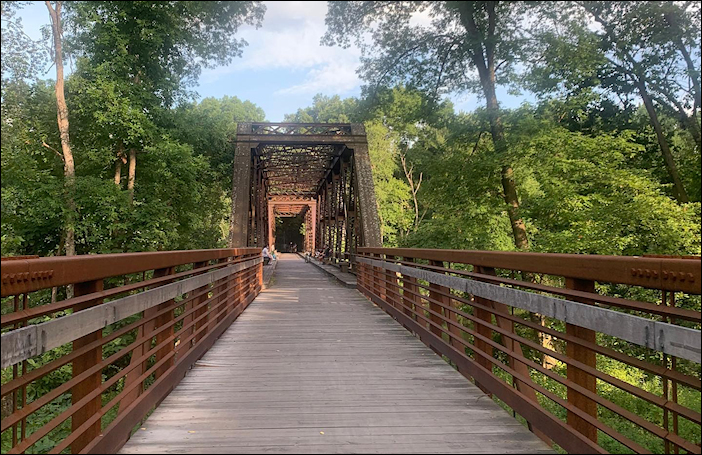 Jason took a drink from his pack and said in a concerned voice that he was out of water. I realized that I had less than 500 ml of water for the eight-plus miles back to the car, and neither of us had any cash. Jason remembered that Stewart’s Shops take Apple Pay, so we located one about a half a mile away. We ran off the rail trail and into Rosendale, down a cute street lined with boutiques and rustic restaurants. We were covered in dirt and sweat and did not fit in with the tourists walking along the sidewalk in the late afternoon sun!

When we reached Stewart’s, I sat down at a picnic table outside. I put my head down for a minute. When I lifted my head, I saw Jason walking out of the shop with three liters of water in his right arm and two pieces of pizza in his left hand. I was so thankful. I’ve been vegan for over a year, but that pizza was the best thing I’ve ever eaten!

We refilled our packs and turned back to the run. With our spirits lifted and our bodies feeling better, we ran and chatted as the miles flew by. We reached our car at 47 miles. Another quick refuel on potato chips and peanut butter M&Ms, and we were off for our last leg. Just eight miles.

We completed a three-mile loop toward the Mohonk Preserve, ran past the car, and continued another 2.5 miles out and back. Those last couple of miles were painful, but I knew after everything I’ve been through in my life, I could do it. 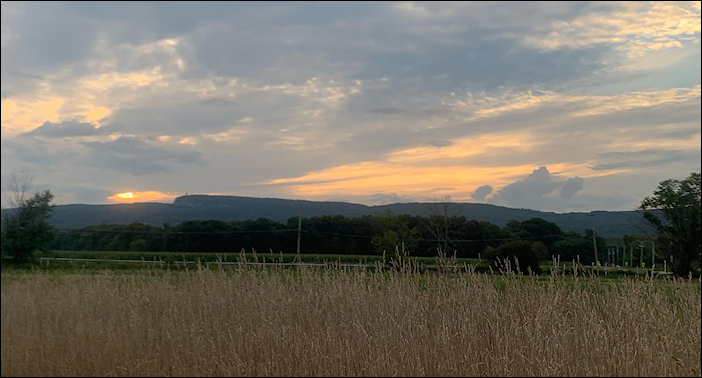 At 55 miles, we both stopped our watches, staggered to the coolers behind our car, and sat down. I grabbed a ginger ale. My legs were already cramping, so I pulled myself up, changed into sweatpants and sweatshirt, rolled out my yoga mat and sat on the grass. Jason handed me a beer. We toasted to an incredible training run and the race to come.

I set my beer down and laid back. It was dark. I looked up at the stars and thought about how small we are compared to the vastness of Earth and galaxy. And I thought about how my accomplishment that day means nothing to the world. But to me, it means the world. It doesn’t matter if it is finishing a 55-mile training run or getting myself out of an abusive marriage. I know I can do hard things. We can all do hard things, things we never thought possible.

Editor’s Note: Mary mentioned that her first10-mile trail race was when she ten years old with her mother. In addition, her three sisters are also runners. In October, her mother is running her first 100 mile race the day before she turns 61. This is one audacious family. 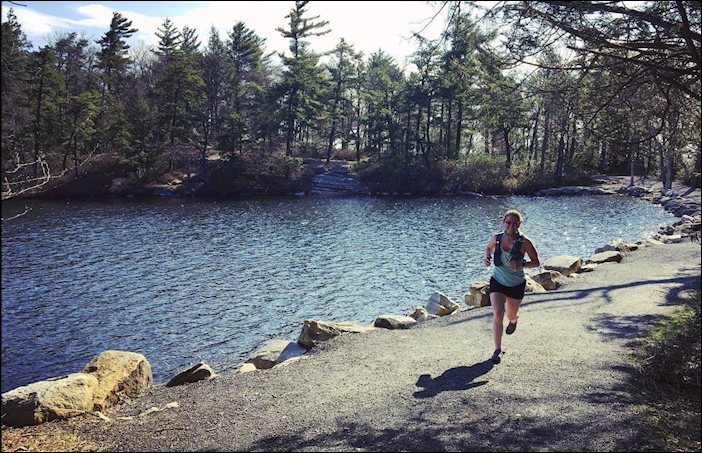