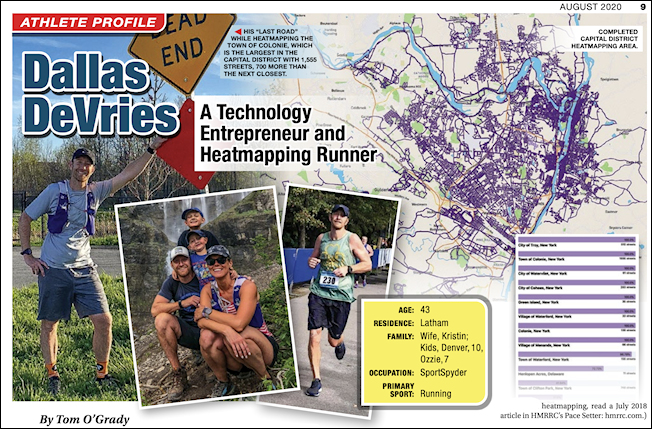 Over the past several months many athletes have had their training and racing plans thrown to the wind because of COVID-19. Dallas DeVries, however, was not phased during the quarantine and continued with his training largely uninterrupted. Dallas’s primary training goals in recent history have been related to heatmapping.

Heatmapping involves loading your GPS information from training onto a training platform and having the paths you have traveled highlighted. The color scheme generally goes from a pale green or yellow to a bright rich red color; the more frequently you visit a place the brighter and richer the color gets. The most common athletes to utilize heatmapping are cyclists and runners, though it is also used by hikers and other athletes who want to keep track of their travels.

Dallas utilizes the heatmapping function to create goals and to keep his run-training interesting by exploring places he has never visited before. In early May, he completed his biggest heatmapping accomplishment to date – running every mile of all 1,555 streets in the Town of Colonie. This was no small feat given the unique combination of the large number of streets involved and the fact that the town is spread out among a larger geographical area than nearby cities. The escalation to Colonie came after previously heatmapping the cities of Waterford, Green Island, Cohoes and Troy.

Dallas’s background paints a great picture of the type of person who would enjoy heatmapping and how someone would be drawn to it from their past experiences. Dallas attended Rensselaer Polytechnic Institute from 1995-1999 and earned a degree in computer and systems engineering. Prior to attending RPI, he had only logged onto the internet once while he was in his Troy High School library. Once on campus, however, the major suited his analytical mind well, and he was able to secure a job after graduation as a software architect and developer with Amici.

Though Dallas was not yet a runner he was a sports fan and was a particularly avid baseball fan. Using an entrepreneurial mindset, he wanted to find a way to apply his knowledge of computer science and engineering to help him retrieve updated NY Mets news. With the help of his brother, he conceptualized the idea of a sports aggregation website that synthesizes sports related tweets and news for readers’ favorite sports, teams and athletes in one place.

With the idea in place the duo created the company SportSpyder as a part-time hobby in 2004. In 2006 Amici was bought by Xerox, and Dallas continued working with them until 2017, when he decided to transition to work full-time on and grow SportSpyder.

In 1998 Dallas decided to begin running as a way to stay fit and reduce stress. This led to him completing the Marine Corps Marathon in 2002. As he was training in 2008, the community and social aspect became more important for him, and he decided to join Albany-based Team Utopia in 2010. Dallas now had a group of like-minded people to train with and hold him accountable as well as some direction from a coach. The change in training proved to be fun and the coaching was valuable, so it wasn’t long before he was distance running again.

In May 2010 he finished Vermont City Marathon in 3:44:54. Over the next several months, he continued to train with Team Utopia and lowered his personal best by 30 minutes to 3:13:49 at the Mohawk Hudson River Marathon. Dallas credits this 30-minute improvement in his personal best to joining the team and receiving guidance in training. Unfortunately, life and a ski injury would get in the way and Dallas would not toe the line of a marathon again until 2015, when he was again training for both Mohawk Hudson and Marine Corps.

During his training in the fall of 2015, Dallas credits Ken Tarullo, another local runner, with sharing the concept of heatmapping with him. The idea of using this technology to instantly explore seemed appealing to his analytical mind.

The opportunity to explore and add excitement to his training was very important, as Dallas describes his training regimen at the time as being a little stale, consisting of running in one of only four places: his neighborhood, SUNY Albany, The Crossings or Corning Preserve. In addition to heatmapping to help explore while training, he also wanted to expand his social group, and joined Albany Running Exchange in 2016. It was at a group run over the summer with ARE that Dallas met his wife Kristin. With a consistent stretch of injury-free training he ran his lifetime best of 3:04:31 at the 2016 Mohawk Hudson River Marathon.

Dallas continued to incorporate heatmapping into his training to explore and keep track of the places he had visited. Eventually he learned about City Strides, which is a separate platform that pulls data from Garmin, Strava, and other GPS sources. Once into the City Strides application a person can track exactly where they have been within different geographical boundaries. Most commonly people track their progress on smaller cities and towns, but there are people who’ve taken on major projects, including the large metropolitan areas – and even the state of Rhode Island.

This was a turning point, when he realized with City Striders that he had finished Cohoes, Green Island and Watervliet as of summer 2018, and from there he planned to finish Troy, Waterford and Latham by the end of 2018. (If you’re interested in his early experience with heatmapping, click here for his July 2018 article in HMRRC’s Pace Setter and his recent article that is lavishly illustrated!)

Since 2018, Dallas has transitioned from training for races to primarily focusing on setting heatmapping goals. Through the use of Strava, the concept has caught on with more people, and he also started a Facebook “Capital District Heatmapping” group. The group now has over 30 people who share heatmapping stories in the Capital Region, technology updates, and other heatmapping aspects. He points out that the heatmappers he knows are a pretty even mix of analytical/ tech-savvy people and those who are using it as a way to socialize.

While not doing group runs during the pandemic, heatmapping helps Dallas seek out new running spots. It also provides short- and long-term goals and a sense of accomplishment when he’s finished mapping someplace. Adding heatmapping as an aspect to running doesn’t require excessive speed or competitiveness. Without the stress of time goals, running is more enjoyable and helps him accomplish one of his initial running goals – stress relief!

Dallas also credits the more conservative training pace with helping avoid further injury. It’s a safe way to social distance but get outside to do something. He’s currently working on finishing Schenectady (31%) and Albany (36%), so he’ll have all of Albany, Troy and Schenectady completed. He’s also been working on Niskayuna and Clifton Park. His long-term goal is to heatmap the entire Capital Region and we discuss that in his June 2020 Pace Setter article: hmrrc.com.

For those interested in a new and interesting way to train or explore while running or biking, it’s clear from talking with Dallas that heatmapping can provide variety and break up the monotony that many people experience.  You can join the Capital District Heatmapping group by clicking here.

Tom O’Grady, PhD, MPH (thomas.james. ogrady@gmail.com) of Slingerlands is an avid runner, hiker, and lover of the outdoors. Learn more at ogradystrategies.com.

This article appeared in the August issue of Adirondack Sports and we thank publisher Darryl Caron for sharing it.  Here is the link to the August issue: www.adksports.com/s/adk-sports-2020-08.pdf