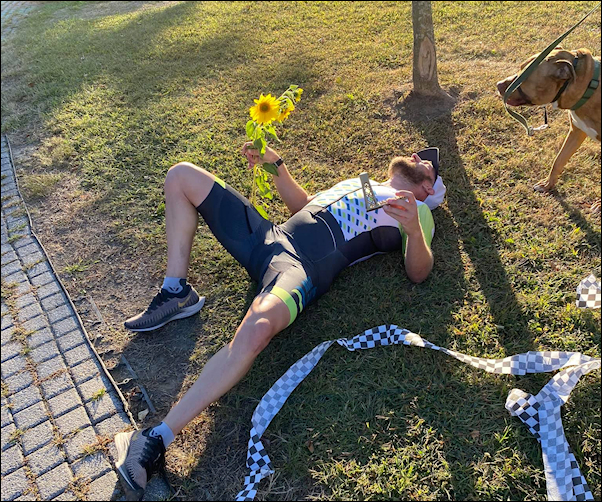 I’ve been training towards a goal of breaking 10 hours in an Ironman for two years. I was on target to make a good shot at it this year after watching sub-10 slip away during Ironman Maryland 2019 when I ran my worst marathon in 5 years to finish in 10:12. Slowly but surely just like every other athlete, I watched everything get canceled including my A-race, Ironman Barcelona, which was originally scheduled for October 4th and is now moved to October 2021. Presented with the choices of trying to maintain fitness for another year, a year that will possibly have significant life changes, or just doing my own damn race to prove to myself I can do it, I chose option B. I encourage everyone to choose option B.

For those unfamiliar, an Ironman is a 2.4 mile swim, a 112 mile bike, and a 26.2 mile marathon, back to back to back. Doing a virtual or solo effort for any individual leg is moderately easy but putting them together makes it a much more difficult challenge, and certainly one that required an enormous amount of help in the water, along the bike course, for the run, and at the transitions where I would need my gear for the next leg.

Because the race wouldn’t have happened without my volunteers, I’m putting this up front so that anyone that doesn’t read the entire article gets to appreciate the people that helped. First, of course, Katie McNamara as Volunteer Coordinator and Lead Volunteer. Once I decided on the course and approximate times that I'd be at checkpoints she planned the rest and no need was unmet. Thanks to Colleen Schermerhorn-Murray and Jennifer Newman for keeping my swim straight and safe in a lake with power boats, and especially for making sure that I was dead on for distance. I was fortunate to have Greg Rashford join for 90 miles of the bike keeping me motivated and moving forwards through the unrelenting winds, although I strictly adhered to no-drafting rules. No real Ironman has better run aid stations than Joshua Korn riding his bike along with you for the whole marathon carrying all the supplies you'll need and reminding you to drink when you're getting dehydrated. And of course, Jennifer Bergeron who joined me for the last 10 miles to help keep the wheels on as I fell into the hole around mile 19-20. I can't think of anyone else I'd rather have next to me, keeping me from falling into the pit mentally with her relentless positivity and rock steady pacing. This is the first Ironman that I haven't walked at all (except when drinking) and I'm actually hopeful that in future races that I'll be able to use this experience to push through the hole and never walk.

Also huge thanks to Bridget Schultz for aid stations and documentary work, Lonnie Halusic at aid stations and cowbell duty, and Rachael Angelini, Amy Weissman, and Eric Bergin for watching the dangerous intersections (and jumping in front of trucks). For the record, I hit red lights at 6 of the 8 intersections, so not exactly ideal for a race. And of course, thanks to my coaches Andy Ruiz and Kevin Kearney for getting me to a place where I had a shot at breaking 10.

Click here for the feature film from Bridget [Editor’s Note: This is only Bridget’s 2nd video and it is amazing!]

For those masochists out there that want the gritty details, buckle up. 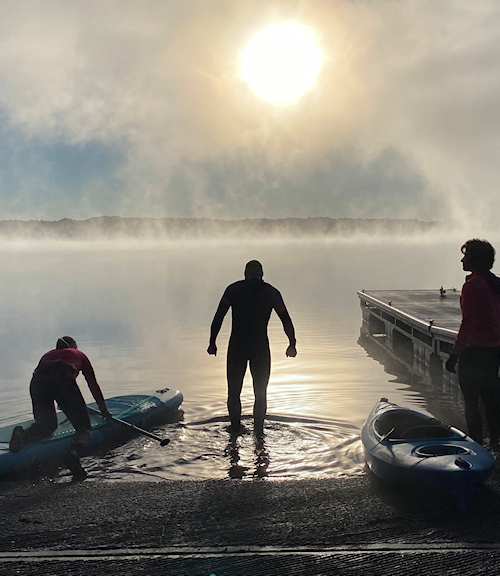 Thanks to COVID closing the pools, like most triathletes, I haven't swum that much this year. I did 1-2 OWS per week but no speedwork in the pool and that showed. Right before pools closed, I did 2x2100 (an Ironman is 4200 yards) in the pool including a 5-minute rest in 1:13 so all things considered I'm not too disappointed but there's room for improvement. There is nothing less inspiring for a race start than being surrounded by spectators and giving yourself a 3-2-1 countdown. Normally the beginning of an Ironman is loud pump-up music and everyone is excited. Not as true when it’s about 35 degrees out and you’re the only one racing. Not having any feet to draft made it slower but never having to sight forwards was nice. My right hand started to go numb about 3/4 of the way through but not badly enough to slow me down. Feet also started to lose feeling but again, not enough to matter in the swim or the bike. Because of the 180-degree U-turns my lap splits varied greatly so I never knew how I was doing in the water which is a frustrating way to start a race. 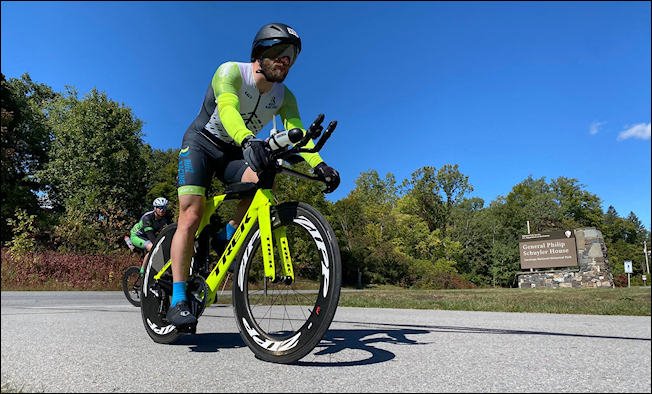 I made sure to dry off as best I could in T1 because the air temperature was 44 degrees. I wore socks, toe covers, and arm sleeves, none of which I would wear in a normal race. Goal was low to hold mid 190 watts but I was held 230 watts for the first 20 minutes to warm up, putting my HR higher than normal in the mid 160s. Once I felt more comfortable, I lowered the power and my HR finally dropped into the 150s which I knew was crucial to having a chance on the run. For an Ironman you need to try to preserve your glycogen stores for the run because typically it is harder to take in calories at that point. If you start the run with your stores depleted, prepare for a miserable 26 miles. I picked up Greg Rashford at mile 12 and he helped set the pace and keep me motivated. The winds increased throughout the day and even with a 6-bike gap (the Ironman rule for drafting, which I did legitimately maintain) I could feel some benefit. Normally in a real race I'd get some legal drafting while passing or being passed but I strictly maintained the gap except when going to the front to take a pull. After 5 out and backs along the main section of the course I knew I had a tailwind to T2, but also had to go through two towns with plenty of traffic. The last five miles had a total of five traffic lights and left hand turns which made it the most dangerous part of the course. I almost got hit by two cars towards the very end of the race (one my fault, one definitely an aggressive truck trying to make a point) which illustrates the biggest danger of an Ironman at race effort on open roads. 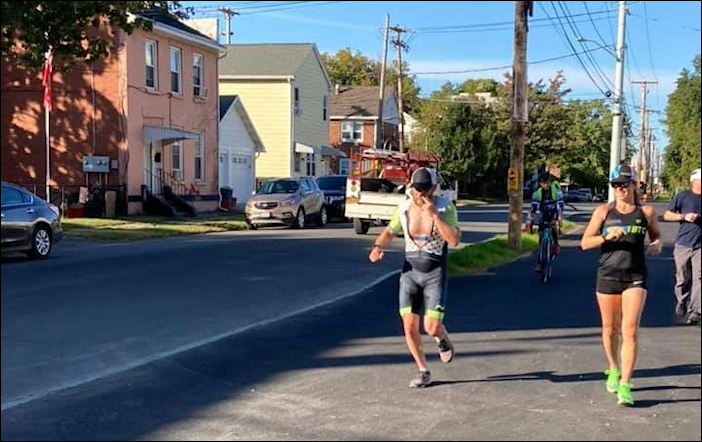 Coming out of T2 I needed a 3:45 to break 10 hours. I've run 3:43 before and although my longest run this year was only 15 miles without many total miles in my legs, I've been really confident running 8-minute miles. My normal mistake, and many peoples mistake, is coming out of T2 fast and then blowing up so I consciously dialed it back with surprisingly good success. The first 15 miles was on a gravel path and I felt amazingly light on my feet. I was rock steady, clicking off 7:50-8:05 miles like it was my job. I've never felt even remotely as good as I did at that point. My bike partner, Josh Korn, rode slightly behind me so that he wasn’t artificially pacing me (another Ironman rule is no run pacing) and every 2 miles asked me what I wanted for aid and rode up the path to have it ready. Thanks to his efforts I was able to make very minimal stops to take in fluid and calories. Mile 16 went from the gravel path to Peebles Island and I accidentally took a wrong turn and got on the wrong bridge. Thankfully Josh yelled to me where to go and I got back on track, only losing around 20 seconds. My wife noticed I hadn’t been drinking as much as planned and I consciously tried to drink more which absolutely was necessary at that point.

I was joined by Jennifer Bergeron at mile 16 and told her I'd never felt this good at this point before. By mile 18 I could see things trending downward and told her that in about 3-4 miles I was going to fall off the cliff and I'd need support. I made it 2 miles before that happened. At the 20 mile mark with a 10k to go I looked at my watch and saw that even if I dropped to a 10 minute pace I would still break 10, so I stopped looking at my watch and just let Jen talk me to the finish with Andy Ruiz and Joshua Korn yelling support from behind. I've never gone from amazing to broken that fast. At mile 25 my calf completely spasmed and Jen immediately went into Yogi mode telling me to breathe into the stretch. I was so ready to be done at that point I started running on it in complete pain just to be finished. Normally in an Ironman the end of the run is lined with cheering spectators and you can’t help but run faster, but that was not the case here. Because I ended a little short on the bike, I was determined to do a proper marathon distance on the run. As I neared the intended finish line and saw that Katie had arranged a finish line tape, I had to tell them to move it backwards because I wasn’t about to hit 26.22 miles. So, the end of the race was me running towards the finish line as it ran away from me until I said for them to stop and broke the tape in 9:51:25, finally achieving my goal.

Comparison to a real race:

In a real race you can draft during the swim which can save you several minutes easily and perhaps more. I didn’t have anyone to draft off, but I also didn’t have to look up to keep myself on course. In total, this made the solo swim harder as the advantage from drafting is huge compared to everything else.

On the bike, obviously not having a closed course is a massive downside because you have to slow down for intersections. Also, in a real race there are more athletes that you can use as motivation to catch and pass or to keep in sight. Having a catered aid station is certainly an advantage but not enough to make up for the deficits, so on net the solo bike is harder.

Even at courses like Lake Placid where much of the run course is desolate, the benefit of having spectators and people cheering is massive. Plus, you have hundreds or thousands of other athletes on course to keep you motivated. It’s important to remember that in Ironman you start the run typically between 6 and 10 hours into the race, so most people are mentally depleted before they even lace up their shoes to run the longest distance most runners will ever complete. In my case, I had Josh on the bike the entire time, Jen running the last 10 miles with me, and Jen and David Newman cheering at multiple spots on the run, so it almost made up for no normal spectators, but not for no other athletes. I did have fully catered aid stations thanks to Josh, which was a huge benefit. I would have to say that this run was harder in different ways but on par with a normal Ironman run.

Doing a virtual event when you’re going for a time goal is mentally hard, whether it’s a 5k or an Ironman. It's just you vs. the clock with little external motivation. But it’s hugely rewarding when you are able to succeed in those circumstances. I will not be doing a solo Ironman again, although I'm glad I did it (in retrospect, not in the moment) so that I could use the fitness I've built up this year and prove to myself that I can go sub-10. Hopefully when races start happening again, I can break 10 in a real race. 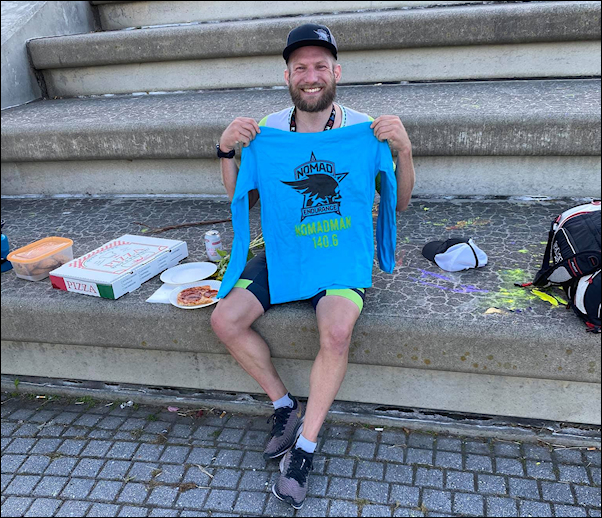 Meet Our Runners
Colleen, Jeremy and Kristin ... You Are Ironmen!