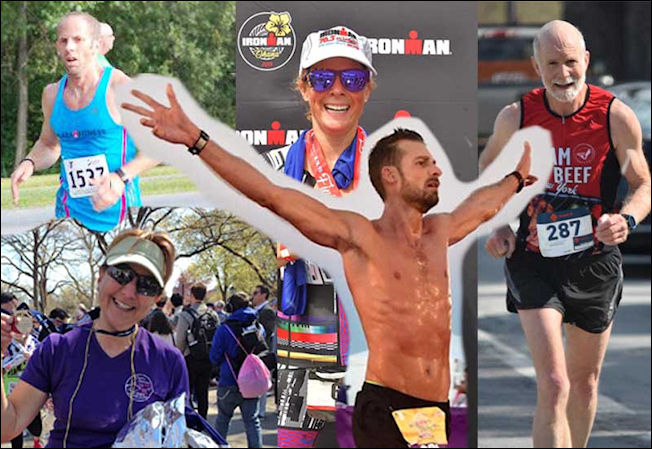 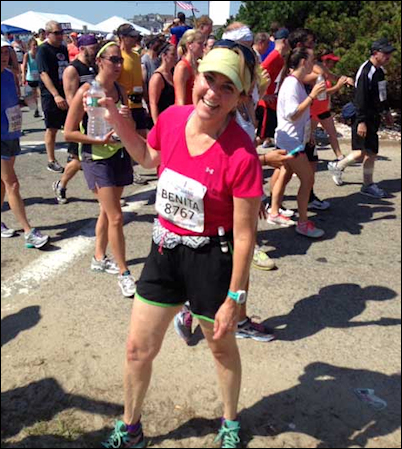 Because it feels so good! It clears my mind and frankly, like people more after a run

Every runner at the back of the pack because they have a goal and no matter what, are going to cross the line.

NYC MARATHON 2003 – I was sick and struggled but finished

I always do a short warm up 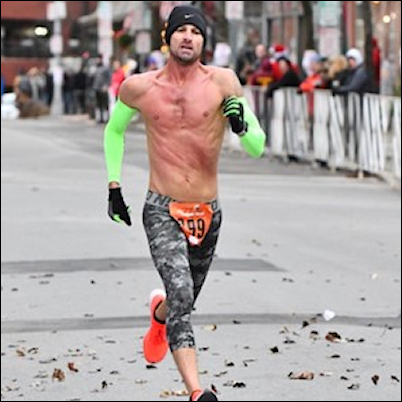 I run to compete with myself and with other runners.

Usain Bolt is one of my favorite runners.  I like runners who have charisma and a personality.

I am currently training for any race that’s happening live and in-person. I am not a fan of virtual racing.

It probably would be the Rock ‘n’ Roll Las Vegas Half.

I currently train in Nike Pegasus Turbos and race in either Vaporfly4% or Next%.

I have a lucky handkerchief.

The strangest thing was an ostrich that snuck up on me while I was running in my cousin’s neighborhood in California.  It scared the sh*t out of me.

What person dead or alive would you most like to take a run with?

I’d like to go on a run with Howard Stern. 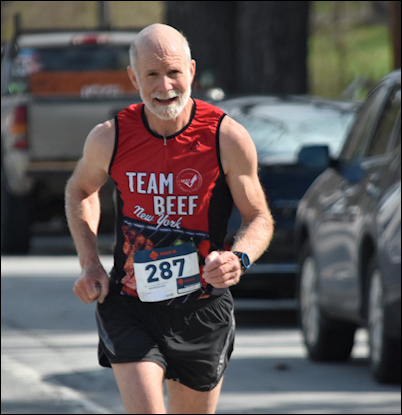 I’ve always run, just haven’t stopped. I grew up on a farm in the ‘60s and was all over the place, without ATVs.  Soccer (aka running) was my school sport as a kid but organized group activities are hard to fit in as an adult. I enjoy nature and running is an outdoor activity I can do anytime anywhere. I traveled a lot for work and would stop and go for a run wherever I was. State forests and hiking trails all over the northeast quickly became my favorite place to run and explore.

Jim Miner, Longevity! I think we all want to be running and enjoying it as long as we can. I don’t have delusions of being able run the distances with the frequency (or coming back after injuries) like he does but knowing that there are people like him out there is inspiration for me.

It’s a toss up. My PR was the 2010 Wineglass Marathon which I ran with both of my kids and got first in my age group. But it hurt!!! Compared with 2014 Shires of Vermont Marathon which I ran after Boston just to see what 2 close marathons would feel like. I had no aspirations, the course was often on small shaded roads, through the woods & hills, crossed a covered bridge, just really nice. I ran it easy and had a nutrition plan. In the end I was only 6 minutes off my PR, 1st in my AG. But it ties for my best run because it wasn’t like I had just run a marathon, I Felt Great!!

I was chided a while back after I put a post on Facebook that I was on a 1-month Marathon training plan. I had entered and started training for the March Virginia Beach Shamrock Marathon, which got cancelled.  Since then I’ve entered a long-distance race almost every month which subsequently was cancelled. The last race I was training for was the Oct 25th Cougar Mountain 50K near Seattle which was also recently cancelled. Since I had the plane ticket, I switched to the Boise Marathon which is the same weekend. So, I’m still on track with my 1-month training plan.

Hellgate 100K (How can you not put a race with a name like that on your bucket list!)

No idea.  Whenever it was, it was years ago and probably downhill. Treadmills, track and speed work have never been my thing.

Double knotting my shoelaces is the closest I get to a ritual.

This summer I was running at night with just a headlamp. I was on an uphill stretch, zoning out, with my head down and the light shining not more than 6 or 8 feet in front of me when I ran head on, straight into a family of skunks. They were walking right down the middle of the road, and yes, I can run in the middle of the road for miles sometimes where I live. When I saw the first one I sort of leaped to the side and then saw all the rest of them. There were 2 adults and 5 kits and I was sure I was about to be sprayed. I tried to avoid them as I went by and felt relieved as I made it past the last one. I looked back a few feet after I passed the group and saw that all of the kits had turned around and were following me! (No, I didn’t stick around to play!)

That’s a tough question for me. I just enjoy running with friends when I can. 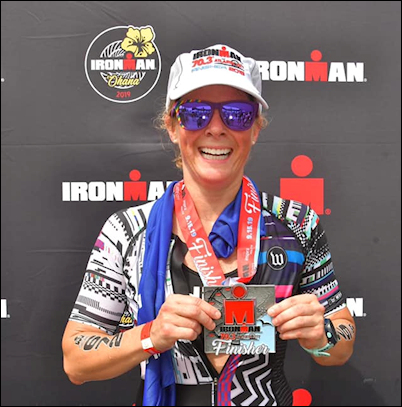 I run because I love it. Running puts me in a positive, cheerful, happy upbeat mood and is an excellent stress reliever. It is also a great way to meet people.

I’d say locally, although I don’t know her well, Lauren Carnahan. She is always posting positive and upbeat Running related posts on Facebook daily that motivate me and I am sure many others. She runs 9.5 miles and sometimes longer almost every day and isn’t afraid to try new things like trail running and biking (face planting). She is a fast and very talented up and coming local runner.

What was my worst run?

Anytime running while injured is not fun at all. I got injured while running Boston Marathon 2017. The last few miles of that marathon were the most painful and uncomfortable miles of my life. So painful that I had walk/limp and drag my leg the last .40 miles of that marathon right down Boylston street to the finish line. After that marathon, I ended up walking a mile on crutches alone back to my hotel room as I could not put any pressure on my right leg.

What was my best run? My best run was probably the 2016 local Mohawk Hudson River Marathon where I managed to run a 3:16:19 on my home turf.

Definitely a full Ironman 140.6. I was registered for 2020 Ironman Maryland but had to defer to 2021 because of the pandemic. Finishing an Ironman is my #1 goal.

What shoes do I train in?

I like to switch my sneakers often and anyone who truly knows me knows that I keep 6 or more pairs in my rotation per season. I am currently running in Brooks Ravenna 11, Nike Pegasus, Hoka One Clifton, Brooks Levitate, and some other Nike sneaker.

What is my fastest mile?

Try to remain calm and trust in my training on race day is key for me.

Lately I crave an ice-cold beverage like a Gatorade zero or water immediately after my longer runs. Sometimes, I crave pizza and hit up a local Blaze pizza after my runs. I’m usually not terribly hungry immediately after a run. Once in a blue moon. 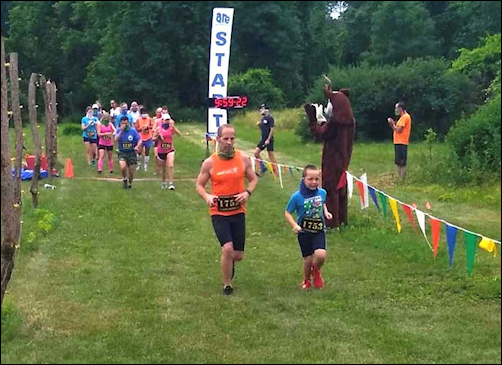 Mat running with his son

I started running in my freshman year of high school with my sister. I was one of the smallest kids at school and was trying to find a sport that suited me. Right away I fell in love with running and knew that it would be a long-lasting outlet for me.

Over the years running has evolved from being a competitive sport to a more of effective form of fitness, meditation, and relaxation. There is nothing better than a good run to take your mind away from everything else and give you that little reset.

When I was in high school ironically it was Carl Lewis and his sprinting that really inspired me and drove me to be as good as I could be in my sport.  Later it would be Bob Kennedy and Kenenisa Bekele that would provide inspiration.

These days I thrive more on helping others to become better runners. I get great enjoyment in meeting new runners who have ambitious goals and those that have no idea of their true potential.

I love them all.

One of my most fun running memories was in the early days of the Saratoga Palio when I went in and ran my half marathon PR totally unexpected.

One time I was running, and I found a car off the side of the road in a deep ravine like it had just crashed.  No one was around and, on my way back, I saw that the police had arrived.