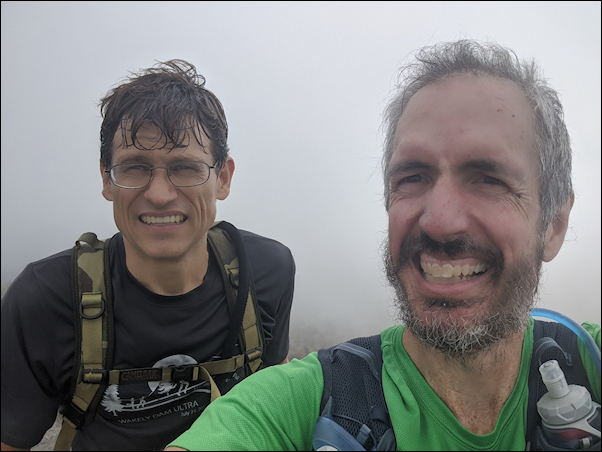 Given the lack of usual race events, what is a runner to do? Many have turned to Fastest Known Times (FKTs). However, not everyone can run an FKT but, with a bit of creativity, friends, and daring to go where no one has gone before, I have succeeded in three OKTs (Only Known Time), which turn out to be FKTs as well. Without a busy race schedule, it was the perfect time to try new things.

The first of these was an unsupported Lake George 12ster which you can read about here. In summary, we completed the Lake George 12ster challenge without the use of a vehicle in under 24 hours. The challenge involves climbing 12 mountains around Lake George. The hard part about not using the car is the giant lake in the middle of the mountains. If you went around it, it would be over 100 miles and likely be very hard to finish in 24 hours. Also, it would involve a whole lot of road running, and who wants to do that!

The solution to this dilemma is to swim across the lake! The warm summer meant the lake water was less likely to cause life threatening hypothermia. However, the summer boat traffic was very high, which is potentially life threatening. The solution to that problem was to start running at 1a.m. and complete the 4 peaks on the east side of the water, first arriving for the mile+ swim around 7a.m. It does mean that you have to swim over a mile after running almost a marathon and climbing 4 mountains which is only slightly life threatening. The day was epic and we completed the 12ster swim and all in 21h 31m 40s, setting the self propelled FKT for the route! 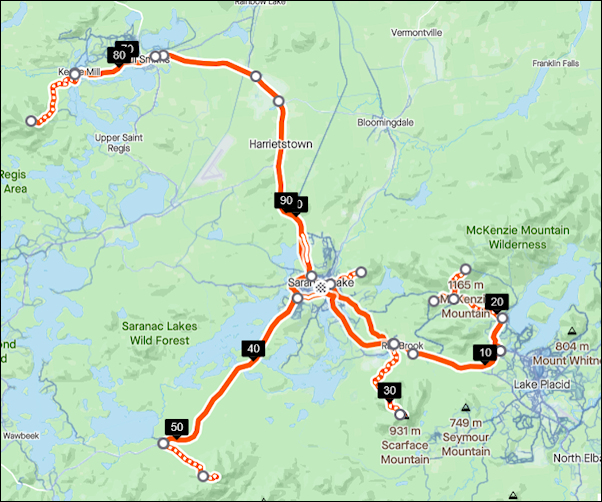 With that success under our belts and my earlier summer DIY ultra on the Saranac 6er described in the August Pace Setter, the next event would be a self-powered Saranac 6er. Swimming would not be the secret sauce for this event. This time road bikes would be used in lieu of a car. It would involve 65 miles of road biking, and of course we would have to start in the middle of the night so that we could finish in daylight. Before attempting this, the farthest I had ever biked was about 30 miles. In addition to all the bike miles, the running involves 28 miles and almost 9,000 feet of vertical gain. 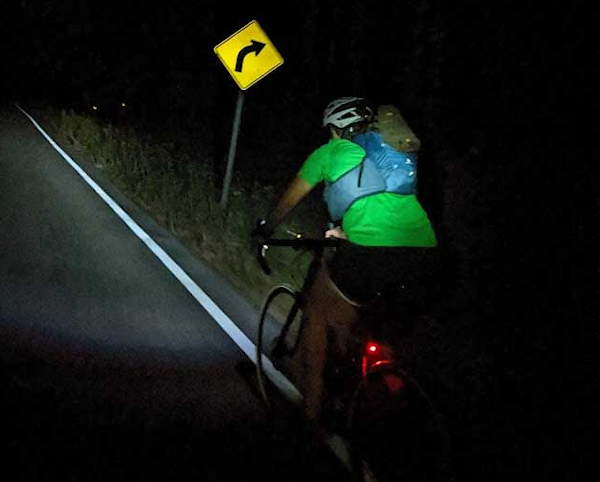 Jake and I started at around 3:30 a.m. at the Saranac Lake 6er bell. The first bike segment is only about a mile. I was riding a new bike with all new equipment. About halfway to the first trailhead, all the stuff fell out of my bike bag onto the road. The new bag was not roomy enough to hold all my things and shoes too. So once again, Jake solved the problem: “Give me a shoe, and you take a shoe and let's start running.  The trailhead is right down the road.” 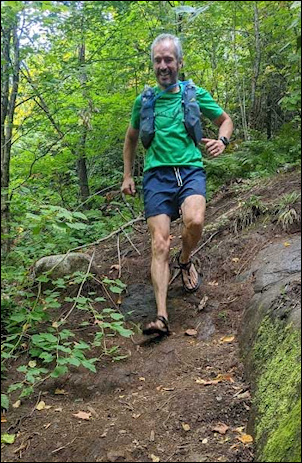 We proceeded to climb Mt. Baker, the smallest and easiest of the peaks, only 1.4 miles round trip. When we returned to the bikes, I had left my bike light on and still was not sure how to pack my sandals. Jake again was the voice of reason, telling me to use the straps on my backpack to store the sandals while on the bike. The next stop was McKenzie and Haystack via the Jackrabbit Trail. This is the hardest climb of the day. McKenzie is close to a High Peak at almost 4,000 ft, and the trail is a brutal rock-filled steep climb complete with several false peaks. At this point, I had a system that worked well, and we made our way to the Scarface trailhead.

Scarface is the best running trail in all of the Saranac 6er mountains. This was the only trail that I was faster on than when I did the 6 with a car. We returned to the bikes and had a meal.

During this summer I am super excited about figuring out nutrition that works well for me on these self supported adventures. I have it down to 4 simple things: peanut butter and jelly burritos, room temperature Amy’s frozen samosa burritos, Tailwind (lemon and cola flavors), and Hüma Gels.  I can’t wait to try these at my next 100-mile race.

The next stop was Ampersand Mountain, which is a truly beautiful peak with a trail that is about 2 miles longer than AllTrails claims it to be. The bike ride was only 13 miles and went pretty quick. The trail starts off almost flat, leaving all the climbing to the last mile and a half. It has super impressive rock steps that someone must have painstakingly put in place. Kudos to the trail maintainers who did that work; it is remarkable and makes the downhill much easier. The next bike ride would be the longest at about 23 miles. I have to say the roads in the Adirondacks are for the most part awesome. They are rolling with wide shoulders and courteous drivers. We made the last peak in good time and had another meal before heading out for the last climb. Sadly, the top was socked in with clouds. 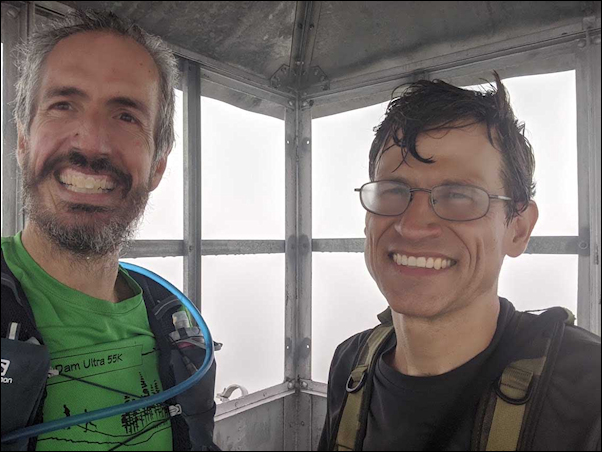 The last bike ride back to the start was 15 miles and went by amazingly fast and we arrived just at dusk to ring the Saranac Lake 6er bell. 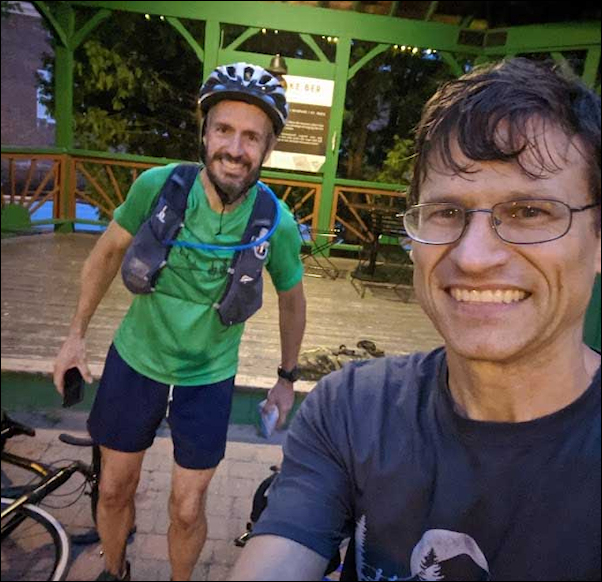 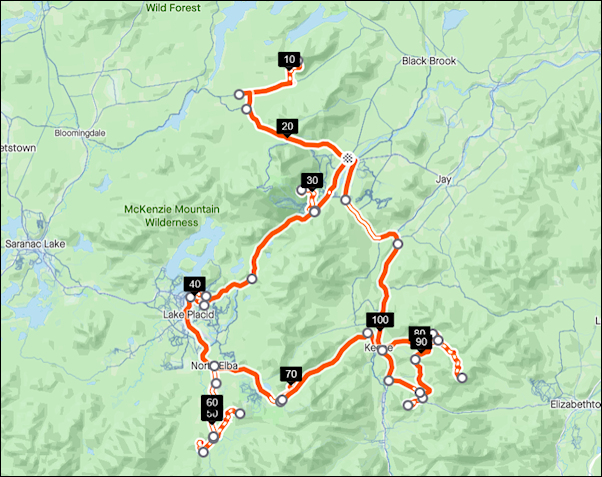 After having so much fun with the Saranac 6er, the obvious next step was the Lake Placid 9er. The running distance is almost the same as the Saranac 6er at about 28 miles. However, there are 2K more feet of climbing. The biking is another 20 miles longer as well, for a total of 85 miles. As the days were rapidly getting shorter, we had to move quickly, so only two weeks after the Saranac 6er we did the LP 9.

For this adventure we started at midnight after a couple of hours sleep giving us all night and the next day to finish. We started at the Pourman’s Taphouse at the four corners in Wilmington. The idea was to make it back in time for a (veggie) burger and a beer. The bike started off with a climb up Whiteface Memorial Highway! I quickly overheated and promptly froze once we reached the top and started the long downhills towards Catamount Mountain. Back country roads are really amazing at night with no cars to be seen.

We arrived at Catamount in good spirits and quickly made it to the top despite a somewhat hard to follow trail. The stars were beautiful from the peak. Somehow on our way back we got turned around and actually started climbing back up again. 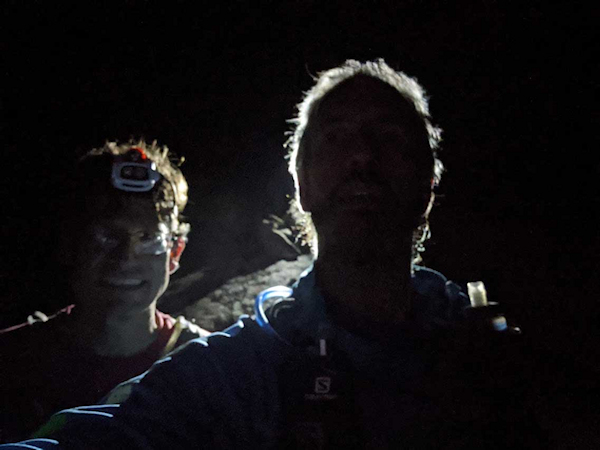 The next stop would be Bear Den at Whiteface Mt. Along the way I pulled ahead of Jake at one point and kept looking back to check on his headlight every minute or so. I looked back at one point and there was no light! I turned around and started searching for Jake, but he was nowhere to be found. I was pretty sure I had gone past the last place where I had seen him, but there was no trace, just a lonely dark road. At this point, I started thinking the trip was done. I then found Jake at the turn I had missed. He had realized there was a missed turn and was not sure racing after me was the best course of action. Happily reunited, the climb back up Whiteface was not nearly as steep as the other way and the ride down was wicked fast.

The road at Whiteface was actually blocked but did not say Do Not Enter, so we lifted the bikes over the roadblock and proceeded to the trailhead. Bear Den is a nice wooded trail leading to a small peak overlooking the ski area, although we could not see too much in the dark. When we reached the bikes again the sun was starting to come up and the construction workers were just arriving. As we left, the security guard gave us an odd look as we rode out the now half open gate that was allowing the workers in. 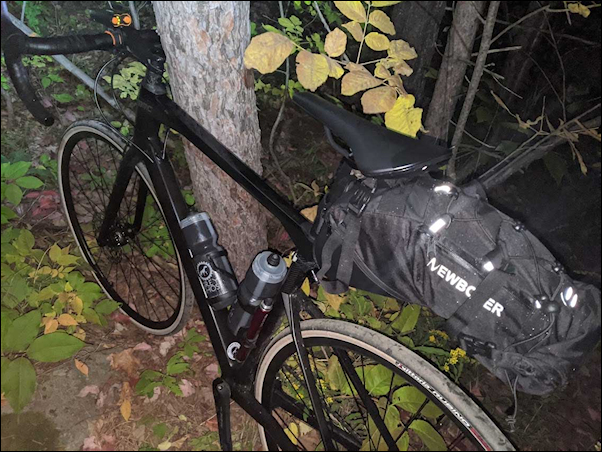 The next stop was Cobble Hill, right in downtown Lake Placid. There was some confusion with closed trailheads due to COVID, but we eventually found our way. This was a really quick run up what could be best described as a big rock with very nice views. The round trip was less than 2 miles. Next stop was Mt. Jo at the Adirondack Loj. Jake and I reminisced about the Lake Placid Marathon that runs on some of the roads along the way.  Mt. Jo is another short but very nice peak. 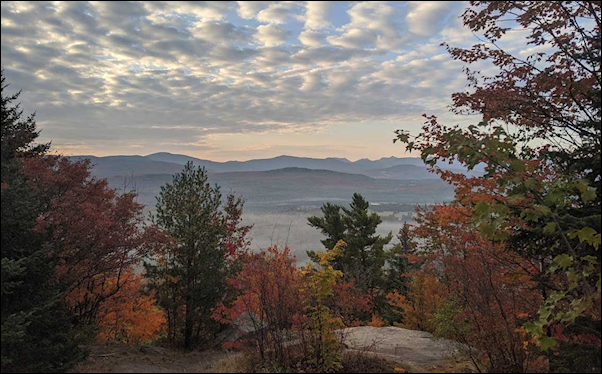 Next stop was Mt. Van Hoevenberg, which until now I thought was just a x-country ski area and not an actual mountain. The trees from the top were an amazing red. The short dirt road to the trailhead was challenging with patches of sand that dumped me off my bike (I am still not used to clip-in pedals…). The next trail would be Pitchoff, after a bike ride down Route 78. 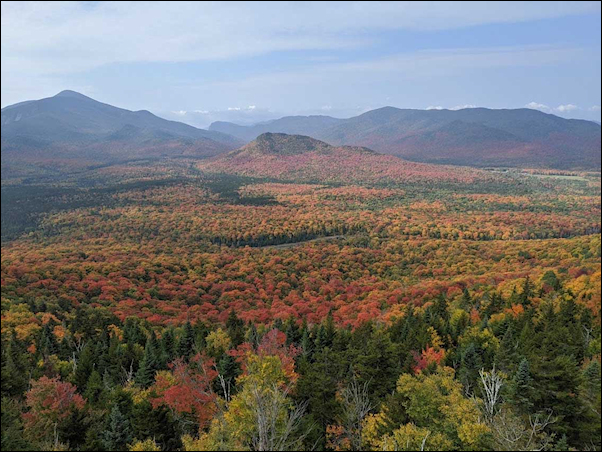 The trailhead was packed and the sun was out in force. This was my least favorite of the mountains. There was no view at the top, and a bunch of rock climbing that was slow going up and down. We were happy to make it out alive.

The next stop would be Big Crow and Hurricane trails. This would involve the hardest bike climb of the day up Hurricane Road after 80 miles of biking and running. It did not disappoint, reducing Jake and me to weaving up the road on the bikes to avoid walking. The last mile is a dirt road where I also fell off the bike again, except this time I did it right next to a car. We finally made it to the trailhead and celebrated with some more food. Big Crow was quick, but Hurricane is a 6-mile round trip. However, it had some of the best views of the day with a fire tower.

Only one peak was left, Baxter. There is a back road to Baxter leading directly from Hurricane. At this point the plans of finishing in the daylight were long gone as the sunset. We reached Baxter and were greeted by a family coming off the mountain with headlamps, with the mother in a dress. It was … very odd… We climbed to the top of Baxter and had completed the LP 9er. All that was left was a 15-mile bike ride in the dark with only a few hills. At this point it became very confusing. The downhills looked like uphills but you could tell they were not because of how fast we were going. I was also convinced that the crickets were some strange noise coming from my new bike. I guess sleep deprivation was setting in. We arrived at the bar as they were closing, around 10.pm. (COVID hours). We would have to settle for a beer at my cabin. It was an awesome day with 85 miles of biking and 28 miles of running/hiking.

Total, Adding it all up

It has been a fun summer of running, biking and swimming. I now have three official FKTs, something I thought I would never have.

DIY Ultra races are lots of fun and have the same feel as a big race.  I will have to mix them in with races once racing starts again.