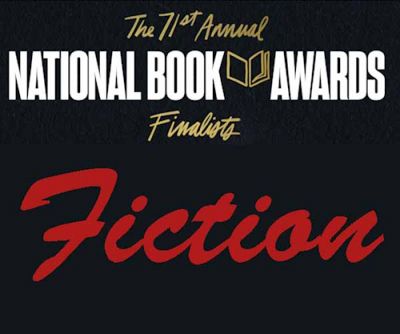 “I read all the 2020 fiction finalists for the National Book Award this month--all reviewed here.  A diverse and interesting group of books, full of commentary relevant to the crazy times we are living in.”
– Sally Drake

Leave the World Behind by Rumaan Alam

A domestic dystopian novel about a New York family’s idyllic vacation on Long Island that takes a chilling turn when another couple shows up at their rental home in a panic with news that a sudden blackout has struck Manhattan. The story takes a tense and suspenseful turn toward a dark and terrifying ending. What I liked best about this novel is how it deals with family conflict and communication in a crisis, and how the fear about what our world is hurtling toward felt so familiar and relevant.

The Secret Lives of Church Ladies by Deesha Philyaw

A wonderful collection of stories about Black women and girls navigating life and love, often caught between the rules of the churches they grew up in and their own desires and dreams. These are beautifully written stories, funny, poignant, romantic and insightful.

This is an epic and beautiful novel about a lonely young boy growing up gay in Thacher-era Glasgow.  Shuggie’s mother is a serious alcoholic with an abusive husband who deserts them in a desperately poor and gritty section of the city. He is totally devoted to taking care of his mother, who he loves deeply and without condition.  Shuggie is an unforgettable character whose journey is heart-wrenching and emotionally powerful.

An inventive satire about Asian actors on the set of a television drama in Hollywood.  The story is told from the perspective of Willis Wu, who plays “Generic Asian Man” in a procedural cop show in constant production. Wu strives for greater roles, ultimately for “Kung Fu Guy,” the pinnacle of success in Chinatown. But his journey is full of struggle and setbacks as stereotypes and racism hold him back. This book was often really funny, but in the way of best satires, the humor contains sharp insight and commentary.

A Children’s Bible by Lydia Millet

This strange novel that reads like a fable follows a group of precocious children on a forced vacation with parents who behave badly. A destructive storm sets up an apocalyptic chaotic scene where the children fend for themselves to save their lives and their future while their parents hide in a fog of hedonism and denial. Very smartly written including interesting narrative technique with a powerful message about how adults are failing the next generation by ignoring climate change.

First time reading this series (FBI Thriller #24) featuring Special Agent Dillon Savich and his SA wife, Sherlock. Savich, Sherlock and SA Pippa Cinelli (borrowed from White Crimes Unit) are working two cases simultaneously. One involves a former convict Savich put away for murder, Marsia Gay, while a new case involves the attempted kidnapping of Rebekah Manvers, the wife of Congressman Rich Manvers and the granddaughter of former Senator John Clarkson, who recently passed away after spending 16 years in a coma. And wouldn't you know it? The cases intertwine! Of course, they do. Plenty of twists here as Pippa, Dillon, and Sherlock and the gang try to solve the crimes before anyone else gets hurt. Makes it worth looking into some prequels!

After just finishing Deadlock by Catherine Coulter, I decided to read its prequel, Labyrinth, the 23rd in the FBI Thriller series starring Special Agent married partners Dillon Savich and Lacey Sherlock. As with Deadlock, Coulter presents the reader with two parallel stories which the agents must solve simultaneously. In the first, Sherlock is in a serious car crash which gives her a major concussion and temporary amnesia (seriously, she doesn't know her husband or their child, Sean). In the process of the accident, Sherlock's car hits a pedestrian, who takes off. He turns out to be a CIA agent running from kidnappers, and the hunt is on for him and his pursuers. In the second, Savich gives Special Agent Griffin Hammersmith a week off to recuperate after a tough case, but Griffin runs smack into another crazy case. Three teens are missing in the small rural town of Gaffer's Ridge, VA. and Griffin is called into action when he thinks he hears a call for help from a distraught woman. After saving her from her attacker, Griffin calls the local sheriff, who arrests her and the victim, Carson DeSilva, for allegedly attacking the sheriff's nephew, Rafer Bodine, the guy who was trying to kill DeSilva. Both stories race to thrilling conclusions as Savich and Sherlock run back and forth between DC and Gaffer's Ridge to try to stop killings in both hot spots. A really good series.

from Sherman's Lagoon in the Times Union