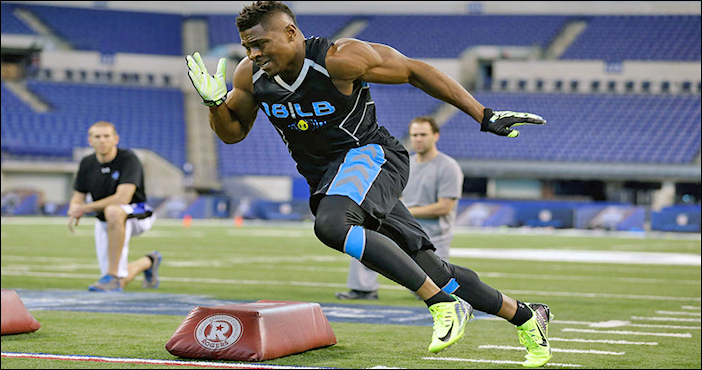 Mention the word “test” in a classroom and a teacher can instantly raise the anxiety levels a point or two. Academic testing just seems to have the effect on people. Sweaty palms, elevated heart rates and shaking hands all may be the result of that little four-letter word. But why is that?

It’s odd that athletic testing generates an almost polar reaction. Athletic tests, competition being the most obvious, are approached with anticipation and excitement. There still may be the sweaty palms and increased heart rates, but by and large the chance to compete is surrounded by excitement that in turn generates lifelong positive associations.

Athletic testing can help one find out who you are or where you are for the given moment. Seasonal bests, personal bests, even non-record setting efforts can offer the possibility of greater things to come. This encouragement fuels motivation and can be a continuous catalyst for the grind of training.

But competitions are not the only way to test an athlete’s ability or to document training progress. There are a number of athletic actions that are time tested and produce results, be they times or marks, that correlate well with future competitive efforts.

The nice thing about most of these tests is that they are simple to administer, quick to do and for the most part only require a stopwatch or tape measure to record results. In fact, some of these “tests” are actions that many athletes routinely do as a part of a warm-up, workout or conditioning phase of training.

Testing can be used by a coach for several reasons that can contribute to an athlete’s season or career. Entry level testing can identify talent. It is a very American thing to let a child choose their sport, regardless of what genetic cards they have been dealt. Testing can help identify which sport or activity an athlete may have a propensity for. Tests can even direct one towards certain events in track and field.

Various terms have been used to describe these tests, but bottom line what we are trying to do here is create benchmarks that document one’s state of fitness or where one may have some innate ability. Actions such as a vertical jump, standing long jump, 50 meters of bounding, standing triple jump or 30 meter sprints all can be used as both training and testing components.

Testing can also identify areas of weakness in the body. Used as a preventive measure, testing can pinpoint underdeveloped areas for which training regimens can be designed that address these areas and prevent injury. Bolstering these weak links can ultimately lead to enhanced performance.

For the injured athlete, testing can document recovery and a safe “return to play.” Today’s test results can be compared with one’s earlier benchmark tests to see if there are any remaining deficits or if one’s injury has healed to the point where competitive training can safely resume.

The final use of testing can be as a quick monitor to measure one’s recovery from a race or hard workout. This information is helpful, as it will help prevent overtraining. This is a concern for the more competitive athlete, where motivational drive and the need to excel can overrun common sense. The inability to replicate baseline marks in such tests as a vertical jump, standing long jump or standing triple jump offer irrefutable evidence that one’s recovery is not complete. The beauty of these tests is that they are simple to perform, easy to do and free. Following an adequate warm-up they usually take seconds to complete. 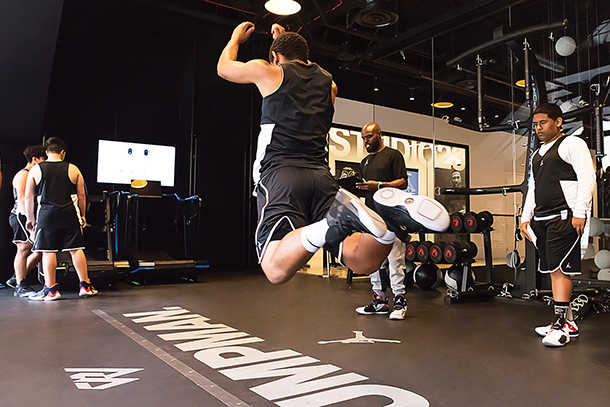 Below is a list of several tests that are easy to implement into a practice plan and can aid one’s current and near future athletic efforts.

Vertical jump – Many strength and conditioning professionals see the vertical jump (VJ) as the best single test of athleticism. There is good reason for this. The VJ tests the coordination and explosive power of the closed kinetic chain of the legs and also how the arms are coordinated with the jump’s reach. To conduct the test one needs a wall to measure a before (height of outstretched arm, middle finger) and after (how high was the final fingertip mark, use chalk to make mark). The action is to squat down and jump up. There are variations, but the described VJ will do for most. It should be noted that distance running tends to deaden one’s vertical jumping ability. This is a more useful test for long jumpers, shot putters and high jumpers.

Standing Long Jump – The standing long jump (SLJ) prizes explosive power in a horizontal direction. It is best performed into a sand pit. Squat down and leap forward. This is a great test for sprinters, runners, throwers and all jumpers.

50m Bounding – In the 50m bound, one starts from a standing start position and counts the number of steps needed to bound or run for 50m. As one’s strength and power increases, the step count will decrease. Horizontal power is important for all athletes.

Standing Triple Jump – In the standing triple jump (STJ) the “hop, step and jump” are performed. This is the one test where “learning” (i.e. – practice and mastery of the sequence) will improve the results. Because of this learning, this test will be more valuable for a more experienced athlete as opposed to the novice whose mastery of the technique is developing. Interestingly, the University of Oklahoma did a study on use of the STJ to identify potential for running the 10K and found it the best indicator, better than VO2 measures! The STJ measures leg strength and this test also correlates with the ability to run a fast 400m.

The 800m Predictor Test – The 800m test is the most difficult of all the tests mentioned here. It is exhausting to perform but serves as an excellent workout in preparation for a peak performance in the 800m. The test is done as follows:

Ideally this test is done 10 days before the BIG race, but I used this test the Tuesday before Saturday races, with great results. There is a similar 1500m predictor test but it is very, very difficult. Drop me a note if you want it. 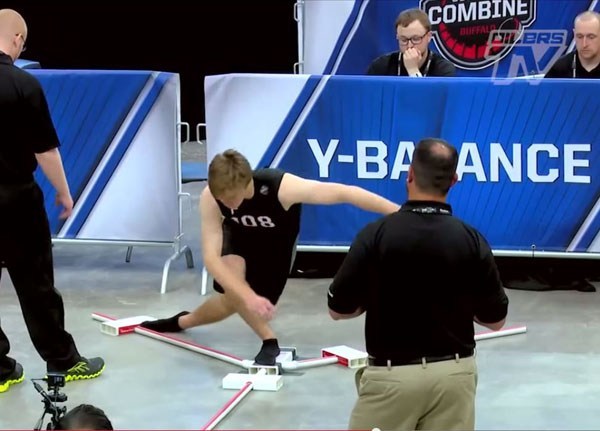 Balance Tests - The final two tests are those that measure balance and proprioception. Balance is the most underrated quality in athletics. Without it one cannot run, jump or throw. It could also be argued that the loss of balance is a precursor to death. After all, nobody dies standing up.

A simple balance test is to stand on one leg with the opposite leg’s hip flexed to 90° and the knee flexed to 90°. The arms should be abducted from the sides to 90° (a “don’t shoot” position) with the palms facing forwards. Eyes should be open to start.

The ability to hold this position motionless for 15 seconds is a good start. This test measures one’s balance using one’s eyesight to maintain balance. The second balance and proprioception test is to close the eyes while standing in the same position. For most, this portion of the test usually ends quickly with one falling to the left or right. Having a clear test area is imperative. The eyes-closed portion of this test documents the proprioceptive input from muscles, tendons, joint capsules and fascial planes, with any deficits offering the potential for significant improvement with periodic practice.

Balance and proprioception are closely linked to force application and ground contact times. When one stands in either of the two test positions, the “quiver” one experiences at the ankle is an unstable joint and the quiver is the body’s attempt to regain balance. If that quiver can be reduced by as little as 1/100th of a second, it can make for a significant time improvement for an elite runner. The fastest human action is “a blink of an eye”, which is about 14/100ths of a second. There are no volitional actions a human can execute in less than 14/100ths seconds.

World class runners take about 180 strides per minute. In a 13:00 men’s 5K race or 15:00 women’s 5K race that would translate to 2340 steps for men and 2700 steps for women. If one’s ground contact time is reduced by the 1/100th second through improved balance, that could translate to a 23 or 27 second improvement in one’s time. The challenger now becomes champion.

Balance work for the novice 5K runner in the 20-21 minutes range would be less dramatic. Marked improvements would more be the result of increasing one’s weekly mileage 5-10 miles per week or losing 5-10 pounds. Nonetheless, balance work can be justified with the decreased “quiver” of joint instability at the foot and leg. Improved balance would decrease the incidence of running-related repetitive motion soft tissue injuries.

Hopefully, one can see that testing can play an important role if programmed improvement is a goal. Proper use of testing would call for some long-term planning with the testing baselines established early in a season’s training cycle. Periodic re-testing can be used to monitor developments over the course of a season and even a career. Depending on one’s intent, multiple areas can be explored (talent identification, weaknesses, return to play concerns, overtraining) from which the fine tuning of future plans can be done.

The beauty of athletic testing is that, for the most part, the tests are easy to do, can be done quickly and without much equipment. The tests provide valuable information as to where one is training-wise by addressing the effectiveness of one’s training. Once again, athletic testing identifies where and what you are, not what you are not. 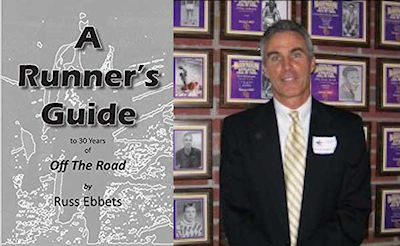 Russ Ebbets, DC, is a USATF Level 3 Coach and lectures nationally on sport and health related topics. He serves as editor of Track Coach, the technical journal for USATF. He is author of the novel Supernova on the famed running program at Villanova University and the sequel Time and Chance. His most recent book, A Runner’s Guide, a collection of training tips and running has been nominated for the Track and Field Writers of America Book of the Year 2019. He can be contacted at spinedoctor229@hotmail.com.