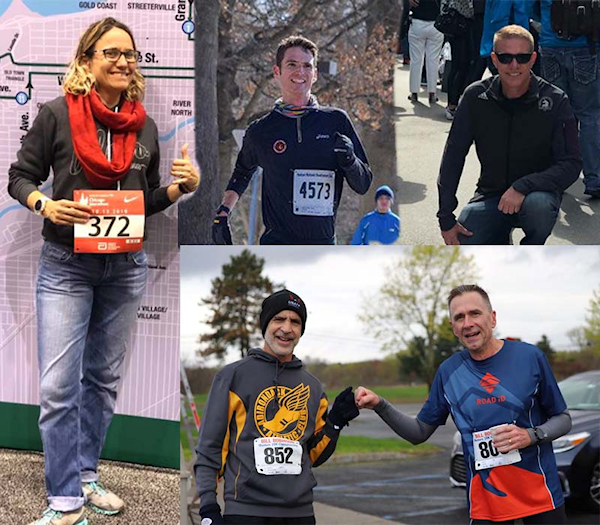 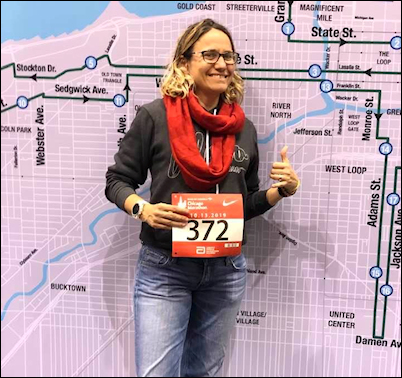 Because I feel better and those around me feel better when I do. It is my mental health care just as much as for my physical health.

My favorite professional runner is Des. But, most inspiring to me are my parents. They have both run longer than I have been alive and showed me how to be a runner while having a job and family, and my first runs (lots of them) were in my mom’s belly long before pregnant women did that.

I’ve had tons of terrible runs, but I don’t dwell on them or remember them. My worst race was last Spring’s Vermont City Marathon (2019). I have never felt so terrible during a race with no reason. It’s the closest I’ve come to quitting mid-race.

Hands down, Philly Marathon 2018. Sure, I slowed in the last three miles, but even with that I had a big PR and I felt amazing ALMOST the whole race!

Nothing! I was feeling burned out so I decided to take a year off of racing (at least half and full marathons). My husband still thinks I’ll cave but running just for myself with zero pressure or expectations has been exactly what I needed. My heart goes out to everyone who trained for races that are not happening, and all I can offer is that running for “nothing” race-wise has been a new experience that I am truly appreciating.

I have an actual bucket-list of marathons that will get me to travel to some bucket-list places. But my number one race is actually the Honolulu Marathon. I am from Hawaii but have yet to do this one (the early December date just hasn’t worked out with my calendar). 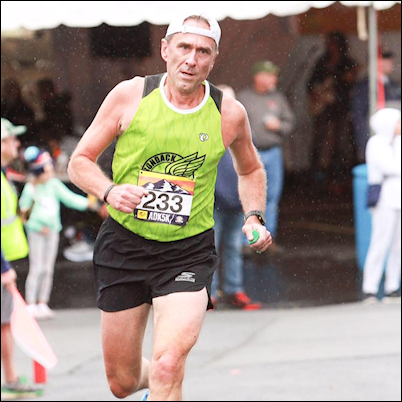 Running occupies a pretty big spot in my life. As I get older, l appreciate the health and social benefits of running, but still get really excited about racing. Age grading is a wonderful thing.

Watching Molly Seidel’s reaction to making the Women’s Olympic Marathon Team was really inspiring. It was proof to me that anyone has a chance as long as they work hard, show up, and go for it. But I have to say that I get the most inspiration from the group I virtually run with on Tuesday nights. Every single person in that group is an inspiration to me. I’m so grateful to be able to be a part of that group.

Any run I where got injured. Luckily there weren’t many. The last was WS#3.

Everything is on hold right now. I ran the HMRRC and USATF Grand Prix races last year, and was hoping to do the same this year, but right now everything is on hold due to the virus. I hope to run my first Marathon in the fall (Mohawk Hudson River!), so that’s on my mind a lot.

The 2020 World Master’s Athletic Championships in Toronto. Or BQ in the fall and run Boston with my son in 2022. 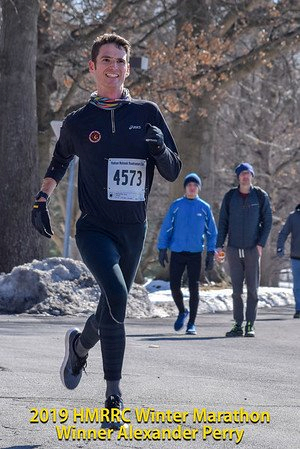 I run for peace and connection, whether I’m connecting with nature or those around me. I run as a discipline, that carries over into other aspects of life. I run because it feels good. Even if tomorrow it came out that running was bad for your heath, I would still run. I run for those that can’t. I carry them with me in my heart.

I don’t care if your fast or slow, any time that someone does something they thought was impossible, I am deeply inspired. I love to see others lay it all on the line and tap into their inner strength.

What is my worst run?

I don’t think there is such a thing. All runs can carry a lesson within them. Even if you feel terrible on a run, you can use it as a form of mental training. Often times we learn the most about ourselves when faced with adversity.

What was my best run?

Any run where I am fully present to all that life has to offer. Being alive is truly a miracle. If you have the ability to run, if you have strong legs and a strong heart and mind, you are truly blessed.

What am I training for?

I was going to run Boston, but since there are no races coming up, I’m just having fun with it. I’m feeling very fit from the marathon training and now I want to take advantage of it and really just enjoy being out there. I do have the twisted branch 100k in August, so I guess I’m slowly building towards that. 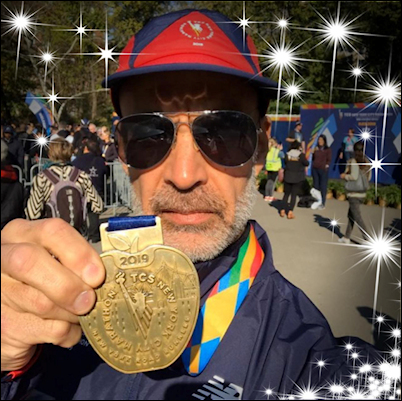 I run for the love of running and to keep fit and active. I also run because I like the social aspect of being in running clubs, in meeting new friends and people, which I miss now.

I really don’t have one runner that inspired me but I do admire all the pioneers of running that started out in the sport and made it what it is today. I am a huge fan of track and field and I admire the athletes’ dedication and work ethic in that sport.

What was my worst run?

I’d have to say it was the Palio half marathon in 2018. I ran with sciatica issues. I probably should not have run at all, but I didn’t want to miss it. So, I hobbled most of the way. Also, Boston marathon 2018 in that freezing monsoon. It was pretty tough and a challenge for all the runners.

What was my best Run?

There have been so many but I would have to say probably back in the late 80s when I was running 18 minute 5K’s and won a couple of races. Also I’ve had some pretty good marathons. My best was 2015 Mohawk Hudson River when I ran a three hour 12 minute time qualifying me for my first Boston Marathon.

What race am I currently training for?

I really don’t train for any races except for marathons because I run so much during the week.  I do try to get to the gym a couple days a week for strength training and core work. I was supposed to be running the New York City Half Marathon on March 15 but that got canceled and was really looking forward to Druther’s Heldeberg to Hudson Half marathon that also was canceled.

What race is number one on my bucket list?

I ran the New York City Marathon which was number one on my bucket list last fall along with the Chicago Marathon.  So for now I am probably looking maybe to run the Marine Corps Marathon next fall or another marathon to make that my 12th marathon. 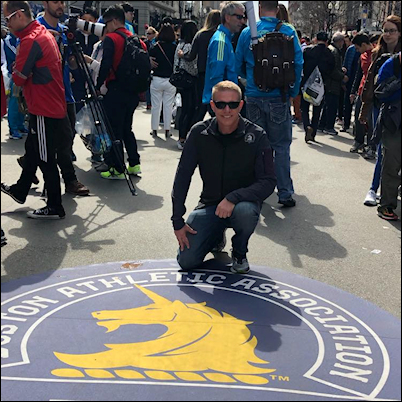 I mainly run for the health benefits. I decided I needed to get off the couch and do something once my daughter left for college to get in better shape. So I decided to give running a try and met lots of great people so it stuck.

What runner inspires you most?

Easy. Gene Dykes. He is a 72 year old I met who continues to set world records running crazy times and completing crazy length ultras at his age.

Pittsburg Marathon. My second marathon. Went out too fast, hit the hills halfway through and proceeded to get dizzy then sick. Had to stop for short time for medical attention but still finished.

This past fall at the NYC and Philadelphia Marathons I ran PRs.

What races are you currently training for?

Before the Coronavirus outbreak, I was training for the Boston Marathon, Martha’s Vineyard Half Marathon, and my first trail Ultra at the Cayuga 50. But I have been battling injuries.

Boston and NYC were my #1’s on my bucket list, but since I’ve completed them now likely Chicago Marathon, Marine Corp Marathon, and some trail ultras.