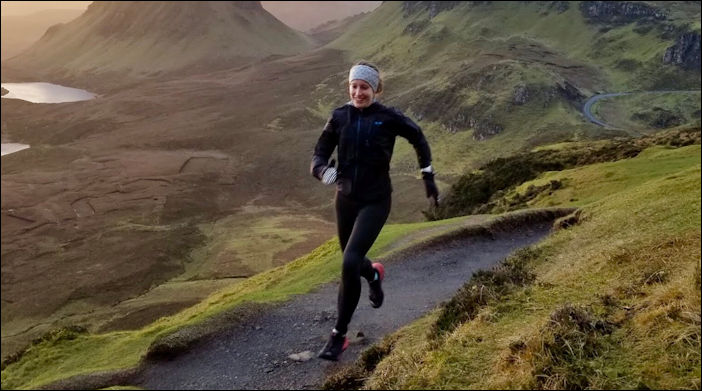 I want to start off with a couple of charts provided by Michelle Merlis, who re-created them using data from UltraRunning Magazine for an academic paper that she wrote in 2018 on running and fertility. The first one shows the percentage of female finishers in road races: 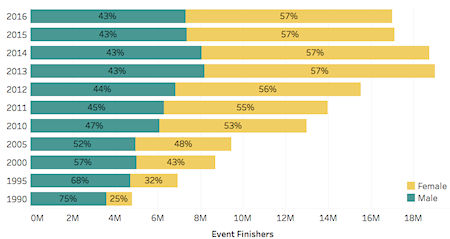 Go ladies! As you can see women are well represented on the roads. The next chart is the percentage of female finishers at ultra events. Since I could not find data exclusively on trail races and many ultras are run on trails, I will use this data to help make the point that there are fewer women trail running: 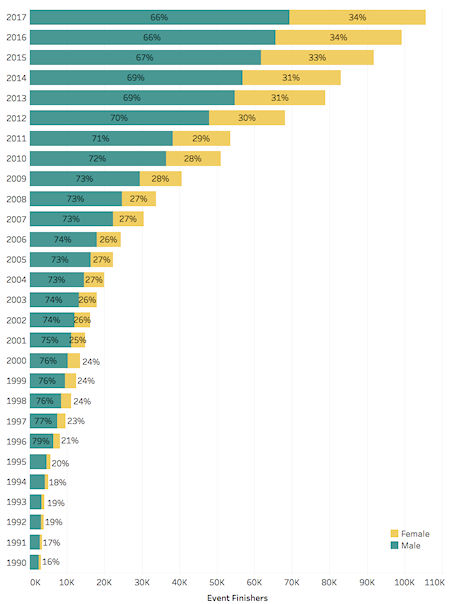 The trend is heading in the right direction, but women are still underrepresented.  In my experience with local trail races, the representation has been much lower. For example, there were 9 women finishers at Wakely Dam Ultra out of 66 runners in 2019.  I must add there were 9 women starters at Wakely as well, since failure is not an option. You either turn tail and head back to the start, you make it to the airport (finish) or get an expensive helicopter ride out of the wilderness. A DNF is not an option at Wakely. Although Wakely is a unique event, I don’t think it is a uniquely male event and that women would enjoy it as much as the men.

Women are more than capable

As I have run longer and longer distances, I have become more interested in super long distance FKTs (Fastest Known Time). When Scott Jurek ran the Appalachian Trail (AT) in 2015, I was able to run 8 miles with him as he passed through southern Vermont. It was really cool to run with Scott and on the cusp of a lifetime achievement.  Scott completed the AT in 46 days, 8 hours, and 7 minutes. In 2011 Jennifer Pharr Daviis, the previous record holder completed the AT in 46 days, 11 hours, and 20 minutes. Scott was only 3 hours and 12 minutes faster than Jennifer, and Jennifer hiked the trail during her record.

Click here for video interview of Scott with me in the background: 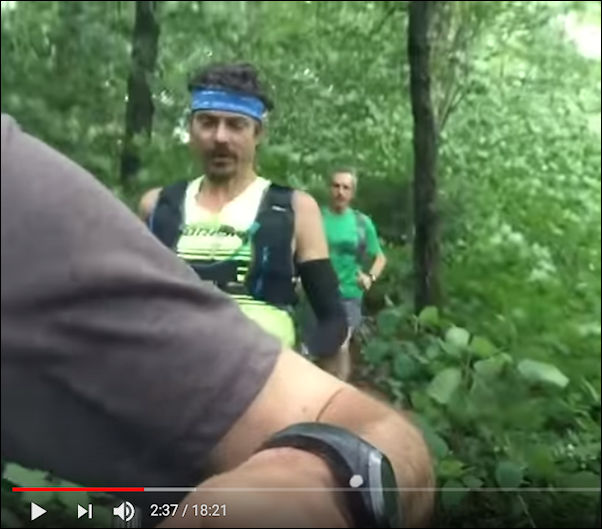 Scott in front with Bill in Background

Women are proving to be an equal match for the men not only in FTKs but in “ultra ultra” long trail races. For example, Courtney Dauwalter came in second place overall at the Tahoe 200 in 2019. There is a great video about her race, click here.  In 2017 Courtney was first place overall (ahead of all the men) in the Moab 240. Click here for interview.

The creator of Barkley Marathons also created the Big Backyard Ultra, a simple race where you repeat a 4.1 mile loop once every hour and the last person standing wins. During the day the loop is on trail and at night it is on road. In 2019, Maggie Guterl from Colorado was the last person still running after 60 laps and 250 miles and the first women to win the race. Courtney Dauwalter came in second the year before with 279 miles. Clearly women are capable of amazing things on the trails, and in many instances in the 200 mile+ range are on equal footing with men. 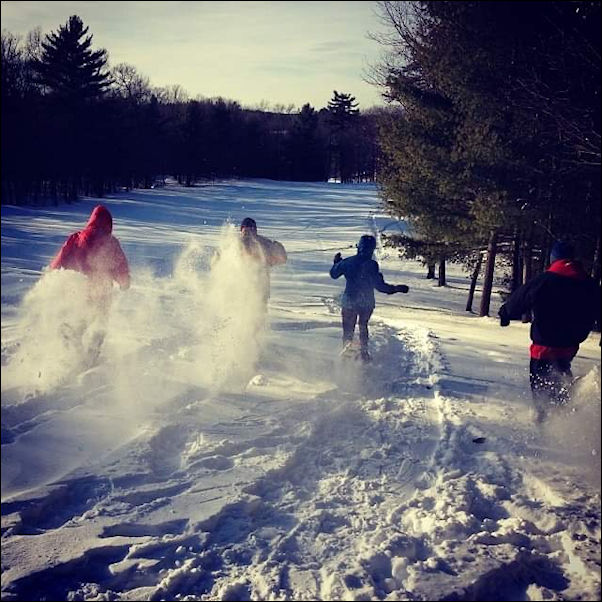 I reached out to a few trail running women that I know and asked them several questions to find out why they like trail running and how to get more women involved. The women I reached out to range in age from 30 to 73, and most are from the Capital District. They have run distances from marathons to 100 mile trail races everything in between. They all have at least two things in common, they are women and they love running on trails! I received lots of really good feedback, OK, maybe too much feedback to include in this article! 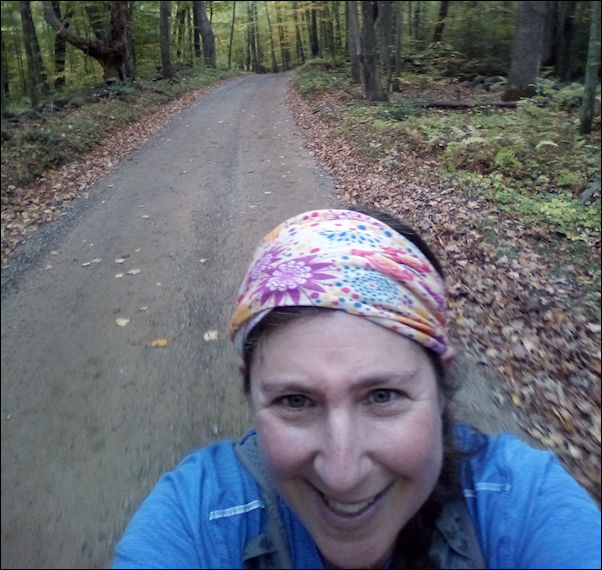 Since many times the pros inspire average folks to take up a sport, I asked who were their favorite pro runners. Many of the women did not have a favorite, or even follow the pros at all.  Below are quotes for those who did.

“Sally McRae on Instagram- she was a regular on the TrailRunner Nation podcast. “

“There are so many badass women to look up to in trail running but if I had to pick one, it would be Clare Gallagher. I, of course, admire how much she has accomplished as an athlete (2016 Leadville 100 winner, 2017 CCC winner, 2019 Western States winner, and so much more) but above all else I love that she uses her platform to advocate for the environment. I’ve never met Clare in real life (although we were once quoted in the same article -- hello, life goals), but you can just tell she is selfless, bounding with joy, and deeply passionate about protecting the Earth. I’d be terrified if I ever had to face her on the start line of a race, but I would also fangirl so hard.”

“My favorite female professional runner is Kara Goucher because she was one of the first to outwardly stand up against doping and speak about the inequality of women athletes. As for my favorite sponsored female runner, rather than professional, I’d say Nikki Kimball. I’ve known Nikki for 20 years and she’s always been a fighter for all things right, plus she’s an amazing athlete with such grit!”

How did you start running trails?

For some long time runners, it was XC in high school. For many it was a running group or a friend that introduced them to the sport. Many just love being in the woods.

“Having grown up in the Catskills, spending a lot of time hiking and exploring the woods, it was just a natural fit and I loved it.”

“I enjoyed hiking and running roads and I just started feeling like running in the woods! “

“I’ve been trail running officially since 1999. That was the first year I really got into the trail running and racing scene. I’ve run over 250 trail races since then and about 90 of them were ultras.”

“I was lucky enough to grow up running them.  My high school had miles and miles of trails surrounding it, and we took full advantage of them. I pretty much stopped running completely after college, only to rediscover my love for running about 10 years ago thanks to the amazing local trail running community.” 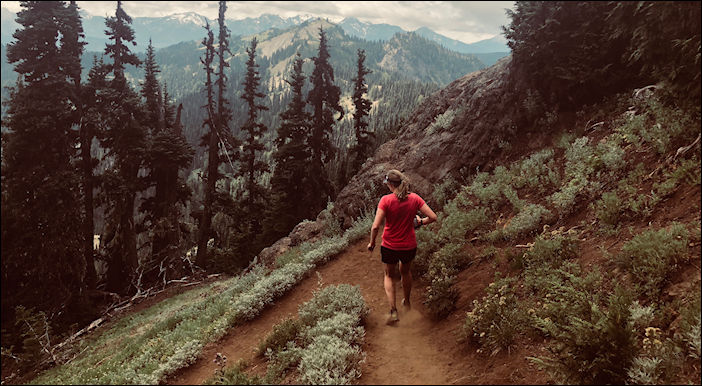 Do you also run roads and/or road races?

The answers were mixed. Some still love road races, others will run roads if they have to and for training purposes, but would still rather be in the woods.

“Definitely. The balance between road and trail depends on the time of the year, but most of the year I run the majority of my miles on the road. In the spring/summer/fall, I’ll usually trail run 2-3 times per week, but even then, I’m still doing one speed workout a week and my favorite place to work out is on the track. “

“I do run some roads/dirt roads but mostly for convenience.  I much prefer trails.  That being said – I would never rule out running another road race/marathon.  Getting back to Boston calls my name!”

“I no longer run road races. At least when I run a trail race I have an excuse for being slower (The mud! The roots! That stream crossing!)”

Why do you think there is a lower percentage of women at trail races?

Some didn’t believe that there is a lower percentage of women compared to men. Some who had been running trails for many years said it was much better now than in the past.

“ I think some women can feel intimidated by the trails, and perceived dangers of trail running, especially solo.”

“When I try to recruit new trail runners they are afraid of twisting an ankle, getting lost, not being able to run alone in the woods. Pacing is different and that is humbling. It’s not mindless - it’s mindful, so maybe road runners enjoy monotonous activity so they can focus on their thoughts, music or conversation- I can’t even speculate. This is male or female.”

“It’s hard to find time to get away for running.  Most often you have to drive to a trail system and that sucks up a lot of time many women don’t have to spare.  If women can’t train regularly on trails, they likely won’t want to do a race on trails.”

“The races I've done in Colorado seem to have an equal number of men and women, but it's probably unique to this state. I guess I don't have a great answer.”

“I think many women and men don't realize that they can trail run. They think that it is some kind of mountaineering that requires special gear or an extra lung or something.”

“I think there is a lower percentage of women in trail races because societal norms tell women that they can’t or shouldn’t do things that scare them or challenge them.”

“Trail running is messy and unpredictable, which is personally why I love it.  That said, I think some women may have the additional barrier of fearing for their personal safety.   If women don't feel safe training on trails, then they won't be racing on them.”

What do you think could be done to increase the number of women that run trails?

Many suggested running groups. Encouraging women to give it a try because once they do, it’s easy to get hooked. Safety came up more than once. I would think that trails might actually be safer than roads for anyone. No distracted drivers and less people in general. If you are a person looking to hurt people you are not going to find many people at all in the middle of the trails at Moreau.

“I don’t know. Free up more time for women? Reduce societal expectations about all the things women should be doing?”

“First and foremost is to simply make it safer for women to run outside. Period. This goes for roads and trails.”

“If they felt they could be safe training on trails—I know a lot are scared but really the odds of a distracted driver are a lot worse than a human predator on the trails.” 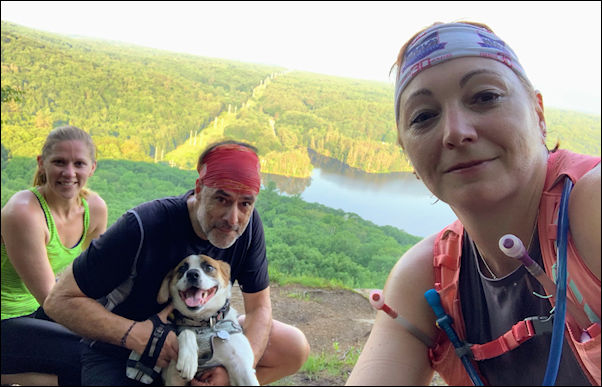 What advice would you give to a woman that wanted to start trail running?

The number one answer for this one was just “JUST DO IT.”

“If you enjoy being outside and want a true mindful meditation experience where you focus on the breath, footing and whatever the trail has to offer start easy with little roots and rocks on a nice pine path and work your way to a mantra of rock, rock, root,...” It is freeing to unplug from your GPS, Bluetooth and conversation and just be in the moment in the woods.”

“Trail running helped me survive a divorce and helped with my depression. Trail running found me some great friends and a new spouse!”

“Do it! It’s so peaceful on the trails. Such a different experience than road running.”

“Don't pay attention to your watch. Trail running is demanding, and your pace will show it! Don't let that discourage you. Also, most trail runners walk the hills. Yes, even the "speedy" experienced ones! Don't be afraid to walk… it is part of the sport.”

Again, I want to thank all the women who answered my questions. Click here for survey spreadsheet.