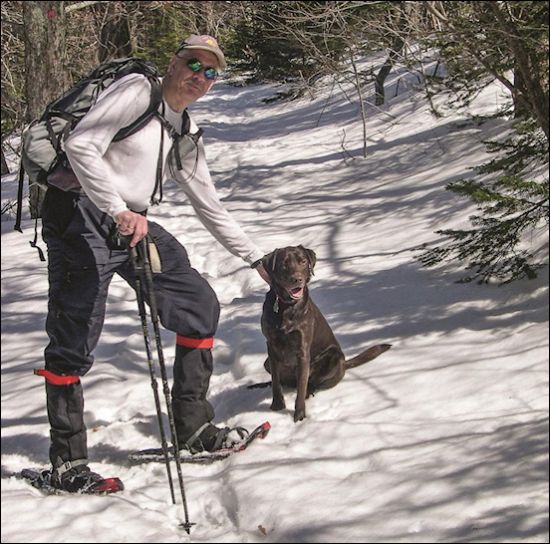 Alan Via – A man who has run and hiked many miles on foot and snowshoes.

Occupation: Current: Author of many articles as well as hiking guides.

Sitting down for coffee with Alan Via was like opening a history book and encyclopedia to the Adirondacks, Catskills, and mountains throughout the greater New England area. Each question posed would summon a long, well thought out, response that was both captivating and caused him to pause and apologize for the sidebars.

Where to begin? Alan began hiking in the Adirondacks over forty years ago. A friend, who was a member of the Adirondack Mountain Club, invited Alan on a hike. The rest is literally history as Alan enjoyed the outing and quickly started planning more ways to get out in the mountains. Pretty soon Alan was hiking almost every weekend. These hikes were often covering multiple mountains and required camping. Not the least a fair weather hiker, these escapades into the Adirondacks continued into the winter. Alan jokes that he completed the winter 46 before I was born. He laughs about the gear what would now be seen as heavy and outmoded. Although I was not alive, my father had forayed into winter hiking so I have pictures that show the array of earlier gear, or lack thereof in some cases, used in the mountains in winter. On the topic of winter hiking Alan shared with me two memorable moments that came to mind from his winter camping trips. The first is a serene moment from a winter camping trip where the ice was thick and snow deep enough to allow camping high on a stream in the Seward Range. He remembers falling asleep with the sound of running water below their tent floor. The second came in winter 1980 when he was sharing a tent on a peakbagging trip to Mt. Marshall in the Adirondacks. Alan recalled the tent lighting up with colors and bangs. This was at the peak of the cold war and they wondered if this was an opening of a clash between the two super powers: the Soviet Union and the United States. Returning to civilization they laughed when discovering it was the opening ceremony to the 1980 Winter Olympics in Lake Placid.

Part of what I liked most about Alan, and maybe most hikers, is that he asks why I want to interview him when there are so many other deserving athletes. My response is to ask about his many hiking accomplishments and completion of hiking challenges. He’s completed a number of rounds of the Adirondack 46 and, Catskill 35, including winter circuits. I asked about one of his toughest athletic achievements. It turns out it was completing the now-common winter 46. In the late 70s and mid 80s there was a lot less winter hiker traffic, and no Internet intel commenting on which trails were broken-out. Today’s lightweight gear and modern clothing are things that could only be dreamed about. Many of the high peaks required all day trail breaking or backpacking.

In addition to tackling the High Peaks of New York’s Adirondacks and Catskills, Alan first completed the Northeast 4000 footers when there were only 111 mountains on the list. When the list was later revised to include 115 peaks, Alan returned to complete those. Outside of his time spent bagging high peaks, he was the co-leader of the Taconic Crest End-to-End hike over a 10 year period, completing it five times. He finds “the little peaks,” bushwhacking the Adirondack 100, and Catskill 100 and 200 peaks among the most satisfying, adding that the Adirondack 100 were some of the most difficult to summit due to “Many long, thick, buggy, bushwhacking miles.”

I asked him if he realizes that most people consider one circuit of either the Adirondack 46 or Catskill 35 to be a crowning athletic achievement. Alan understood where I was going and cut me off to describe friends who have completed “the Grid.” I understood what he’s referring to as the Catskill 3500 Grid requires hikers to complete all 35 peaks above 3500 feet during each calendar month for a total of 420 climbs. While I feel Alan’s adventures certify him not only as a mountain goat of the highest order but also an endurance athlete with an impressive resume, he minimizes the accomplishments, pointing to friends with far greater achievements.

In addition to his tenure as the Adirondack Mt. Club’s Risk Manager and Insurance Chair for over 30 years and its Publications Chair for 6, he was the outings chair of ADK’s Albany chapter for 14 years.
Over his career he’s been a trip leader for various hiking clubs including the ADK, Catskill Mountain Club, Catskill 3500 Club, and Taconic Hiking Club. Alan continues to hike the high and low peaks with friends and his dog, focusing on off the beaten path bushwhacks.

With all this experience in the mountains it’s no wonder that Alan can talk fluently about almost any trail in the Adirondacks and Catskills. All this knowledge and the joy he gets from hiking and being with his companions in the mountains is what sparked his interest in writing. His list of publications is as impressive as his hiking accomplishments, and include articles in Adirondack Sports and Fitness, Catskill Canister, Watershed Post, Poughkeepsie Journal, Spotlight, Catskill Canister, Watershed Post, Poughkeepsie Journal, Spotlight, and Adirondac. After writing so many articles, Alan decided to try and write a hiking guide. I have the pleasure of owning The Catskill 67 – A Hiker’s Guide to the Catskills 100 Peaks under 3500 ft. The success of this first book led to Doghiker – Great Hikes With Dogs From the Adirondacks through the Catskills to be published by SUNY Press in April 2020. In addition, Alan has a third book that focuses on lesser known mountains, mostly bushwhacks, not in other guides.
Alan talks about his training routine. Over the years Alan would run five or six times a week, covering 30-35 miles per week. It provided the endurance and stamina needed to complete the longer weekend hikes. It is safe to say that Alan was likely hiking an extra ten to twenty miles each weekend, so he was consistently covering close to fifty miles a week by foot.  The weekend hiking mileages included large elevation gains and traveling over rugged terrain in the mountains. On this note Alan stops and gives me a look that only a runner can understand as he says, “After ankle and knee surgeries I miss running.” For those who noticed, Alan was a runner for most of his life. Alan was the co-founder of the Delmar Dash, one of my personal favorites and one of the area’s premiere spring road races. He loved competing, with the Stockade-athon one of his favorites.
For someone as accomplished as Alan, I am surprised when he shares two of his biggest regrets. The first is that throughout all the hiking and running Alan never ran a marathon (although he has likely completed close to that distance or more during a hike). He was also never able to run the Delmar Dash (although he was invited back for the 25th Anniversary to announce the start) as he was out on the course with the road guards and at water stations.

Alan continues to stay in shape with hikes with his dog in local preserves throughout the week, cycling with his grandchildren, and one or two hikes a week in the mountains. He volunteers his time as a Fire Tower Summit Steward atop Overlook Mountain and looking to get more involved with the Mohawk Hudson Land Conservancy as appreciation for the many hiking opportunities in the area. Indoors, he and his lab, Toby, volunteer as a variety of therapy dog sites.
Challenges have defined Alan’s life.  No has never been in his lexicon as his achievements bear witness. Age has not limited his search for adventure and meaning.  He welcomes new paths to travel down the road of life. 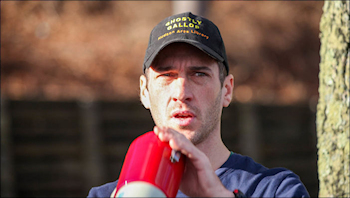 Tom is a public health professional and researcher who is also a NASM Certified Personal Trainer and a USATF Level 1 and VdotO2 Certified Running Coach. If you have had trouble reaching your fitness goals or staying in shape during the COVID-19 pandemic, you can contact him for the month of June at OGrady.Strategies@gmail.com to set up a free 20 minute consultation on how to improve your health and reach your fitness goals this summer.