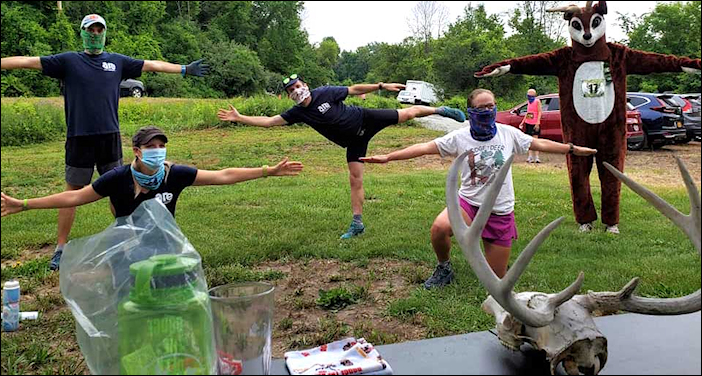 Once more Dodge the Deer has pulled up stakes, abandoning the tame, predictable nature afforded by Schodack Island State Park for a safer haven in the country. This is not the first time Dodge has moved.  Before Schodack, he had spent his formative years at the Pine Bush until, like all adolescents, he decided to exercise his independence and strike out on his own.  This is, apparently, a common impulse for this species. On the drive over, I watched a harried mother deer herd her offspring along the side of the road, when all he really wanted to do was to cross it in front of my car.  Once on the Northway, dangers increased as a prime venison specimen jigsawed across three lanes of traffic to reach a median oasis.  Little did he know…

Fortunately, our Dodge, being accustomed to interplaying with humans, did his research and consented to join long-time ARE members Chris and Emily Chromczak and their two children Sophie and Emily at the Chromczak Family Farm in the Slingerlands.  In addition to the usual woodland animals – woodchucks, chipmunks, skunks and raccoons – for the first time Dodge confronted a flock of free-range chickens who liked nothing better than to sit on Sophie’s lap.  These refugees, possibly from Susan Montanari’s picture book My Dog is a Chicken, had no idea they were livestock.  In fact, in acknowledgement of their urge to participate, Josh declared that anyone crossing the finish line carrying a chicken would suffer a penalty. 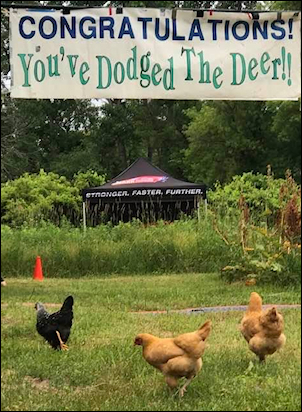 While Dodge was understandably skittish around these strange critters, he had far more to worry about. The ARE crew had spent the previous week in unrelenting manual labor, hacking through the brush surrounding the farm to create a socially-distanced one-mile loop, which we circumnavigated three times. And the payoff? The discovery of a rare bleached-white deer head, complete with antlers.  While we have all seen trophy deer, it is a rare occurrence to discover an intact skull in the woods, as they are favorites of mice and other gnawers.  Needless to say, Dodge was considerably sobered when confronted with this grim reality, exhibited on the registration table for all to gawk at.  The only reassurance to be gained was that, because of its time hidden underground, said deer’s demise was in no way due to COVID-19. 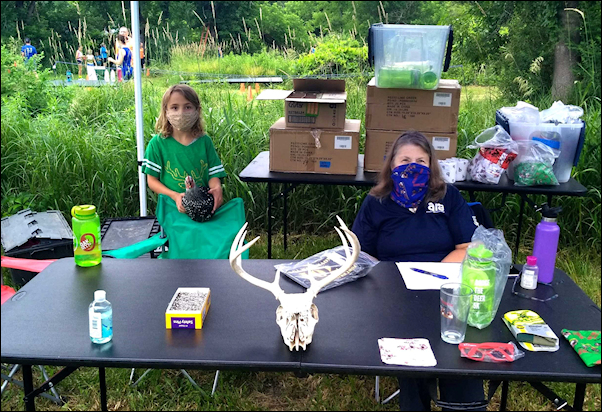 As for the course itself, it was a perfectly natural re-creation of a deer stomping ground, complete with freshly mowed extremely stiff weed stubble, divots, camouflaged humps and bumps, and sharp turns.  Think horse trail and you have the picture.  Pancake flat, as Josh had described it, was slightly off the mark as far as truth in advertising goes.  Picture a rutted horse trail and you get the idea.  Josh suggested spikes, especially if the promised downpours materialized.  Luckily, they didn’t, but after a brief test run, I reverted back to my winter ice spikes.  Although they didn’t make me any faster, they did offer a level of self-confidence and insurance against a rolled ankle. 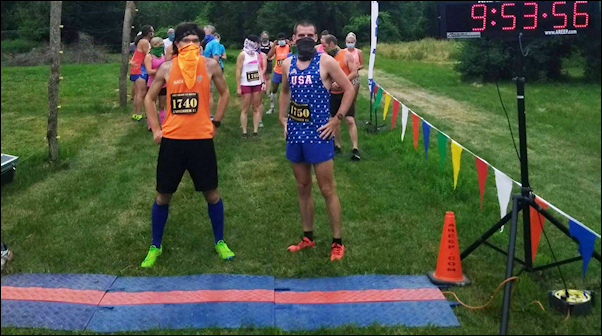 We went off in 25-person waves, two runners at a time, spaced about 30 seconds apart. This was “easy” to do with Josh’s timing system. As usual, Josh was the perfect host, providing play-by-play commentary throughout the race. The neat thing was, though, that because of the loopy course that wound around upon itself, we could hear the entire race being played out as we were in it. There is always a level of uncertainty in any race, but in this case, because of the staggered start, we were never really sure if the person ahead were really ahead. It makes you honest. And then again, since there would be other waves and the final results not compiled until way after each event, sectional victory did not necessarily guarantee overall success. Rather like a time trial at the Tour de France. On the other hand, what a way to guarantee multiple winners beyond the traditional age group categories! After each event, we were offered a choice of yummy sandwiches, courtesy of Bountiful Bread, and sent on our way quickly so the parking lot would be available for the next round.

Leave it to the ARE to host the inaugural and perhaps only live event of the Capital Region summer running season. That this could even happen at all was due to the generous donation of the Chromzack Family Farm. These folks literally put their to-do list on hold as they allowed Dodge to reconfigure their land. I was lucky enough to score the first wave and received a personalized farm tour beforehand. Veggies are looking good, protected by an electric fence as Josh soon discovered, and the Chromzacks are getting ready to launch their farm stand. Stop by soon for some treats and in a few years, for the Christmas trees they intend to plant this year.

On race day, Dodge celebrated his 17th birthday. All sorts of possibilities present themselves for his 18th as he turns legal age in Canada. Get your enhanced driver’s licenses ready! You never know… 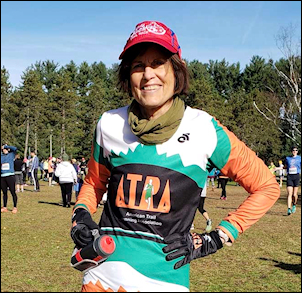 Laura Clark is an avid trail runner and ultramarathoner, snowshoer, and cross-country skier. She is an accomplished writer who has published in journals throughout the Greater Albany Region. 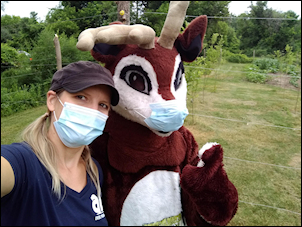 Thanks to Kim Donegan for taking pictures at Dodge the Deer 2020. Click here for all 151 pix.