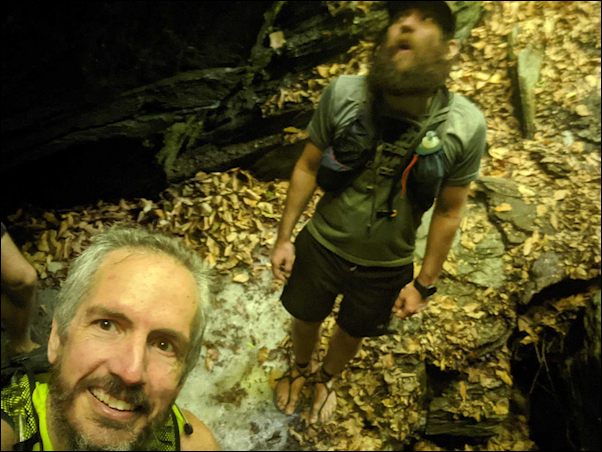 My running year, like everyone else's, has consisted of watching all of my races get canceled one by one: Boston Marathon, Manitou’s Revenge, Cascade Crest 100, Lake Placid Marathon, Wakely Dam…Well, it is time to take things into my own hands and take some of my own advice “You don't need a Race for an Ultra Adventure.”

On June 18th, a particularly hot Thursday, I set out with three others to complete the Taconic Crest Trail. This is a 37 mile trail that follows the ridge lines of the Taconic Mountains and is only a short distance from the Capital District. The trail snakes along the borders of New York, Massachusetts, and Vermont, touching ground in each of those states along the way. According to my GPS tracks on Strava the trail has 9200 feet of vertical gain going north to south. The trail was created  in 1940 after seeing the benefits of other long distance trails (Long Path, Long Trail, Appalachian Trail, etc.) that were made in the early 1900s. The trail is maintained by the Taconic Hiking Club.

T was taking off the week from work and said he was up for something big and fun. Thursday looked like the best day for all of us to make it. After inviting a group of likely suspects, it came down to T, J, H and me. Despite the weather prediction of low 90s for the day, we all agreed to give it a go. The plan was pretty simple. T and J would meet me at the south end of the trail on Rt 20 just outside of New Lebanon at 6:30 a.m. I would leave my car there and drive with them to the north end on Rt 346 near North Pownal, VT where H would be waiting for us at the north end of the trail. The start time would be 7:30 a.m. which meant leaving my house at 5:30 a.m. We would all run south on the TCT for 37 miles and I would drive everybody back to the start. 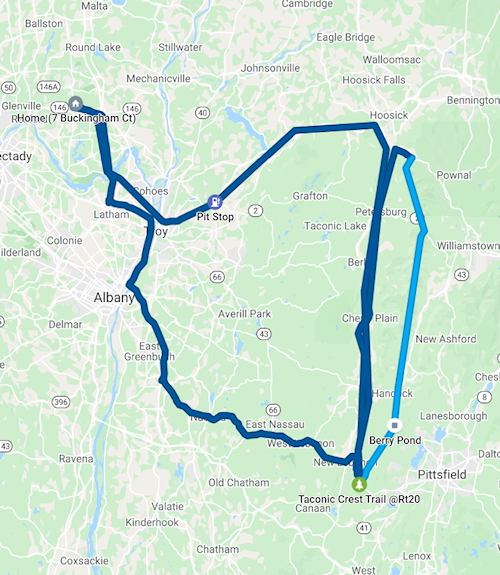 Once it became clear to me that this was going to happen, I started some serious planning. Here is a bit of the conversation: 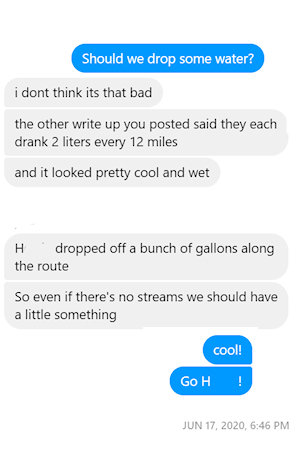 I packed a water filter just in case, along with some gels and bars, and 2.5 liters of water in my pack's bladder. It is always good to plan well in advance of an adventure like this, at least 10 hours from when you are planning to start driving to the trailhead in the morning.

Off to a great start

Amazingly enough, we all made it to the start pretty much exactly on time! H signed us into the register at the start of the trail. I noticed a sign that said the snow hole was a strenuous day hike only to be undertaken by serious hikers and it would take all day. The snow hole is a crevice along the trail that has ice in it year round. It is about 5 miles from the north end of the trail. I don’t think the sign was meant for trail runners. 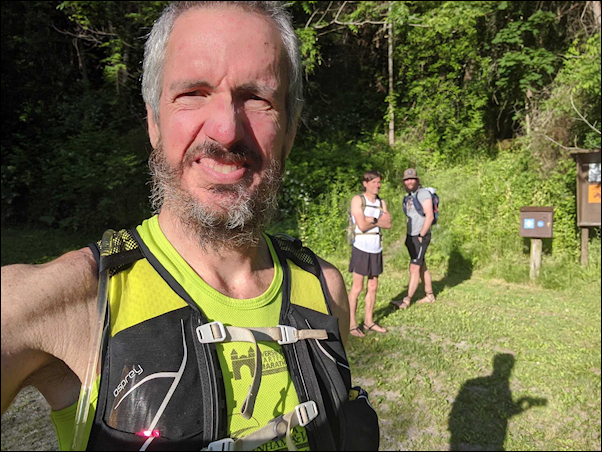 The first 3 miles of this trail are pretty much straight up with about 2000 feet of gain! So, we started at a slow hike. At mile 5 we reached the famous snow hole, and it indeed did have a thick layer of ice on the floor. It had already started to heat up by this time, and we all wanted to just stay in the ice hole.

You can't see it in the picture, but we were all steaming in the snow hole. Well, as they say, all good things must come to an end, and we had to leave the air-conditioned hole and continue on our way south on the increasingly hot trail.

A great trail for running

The Taconic Crest trail is very different from most east coast trails. Much if it is double track and is relatively smooth. It bears little resemblance to the rock and root covered trails of the Adirondacks. We made some good time and quickly hit the first of H’s water drops at mile 8 where the trail crosses Rt 2. At this point we all still had plenty of water, but it was kind of hot, so we ended up drinking some of the water and dumping a bunch of it on our heads to cool down. In hindsight that might not have been the best move, but it was fun at the time. The trail started another climb at that point and H and I discussed and I am pretty sure solved all the world's problems. If only everyone were a long distance runner.

The next water drop happened on the trail and again we were still doing pretty well for water and drank a bit more of it but wasted a fair amount of it as well. For the most part the trail is really easy to follow. However, there are places where the double track continues but the TCT forks off into single track. We came past a particularly swampy area of double track around mile 20 and started a climb when the spidey senses went off and we realized we were off the TCT. We doubled back. J spotted a trail marker on a tree just off the double track, so J and I bushwhacked our way back to the trail. H and T doubled back to find where we missed the turn. J and I stood on the trail calling out for them. It seemed to take forever for them to get back to us. 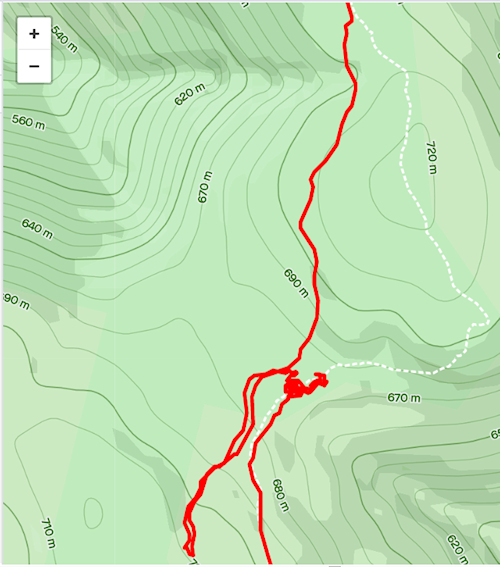 The group separated a bit after this section, making our way to the last water drop at around mile 25. I found H on the long descent to the road where the gallon jug of water was stashed. We passed a backyard pool and I fantasized about how I could talk my way into going for a swim. At this point we were all out of water and the temperature had reached 90. This gallon did not seem to be anywhere near as big as the last two and not a drop was wasted. Someone had carved a set of tree stump chairs which we sat in while we regrouped with some food and water. We only had 12 miles to go, so not too far…

The next few miles are on a smooth flat road, but instead of enjoying some easy running, the direct sun and 90-degree heat had us all walking. I kept looking for a garden hose in one of the yards we passed, but found nothing. The road soon turned into a dirt road where we saw some cows grazing on the other side of the fence. 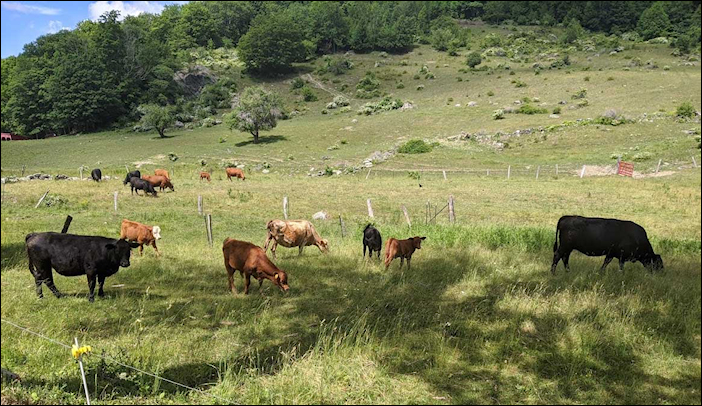 We were all happy to leave the road and get back on the trail. Even if the trail started off with another massive climb, at least it was in the shade.

The next major point of interest was Berry Pond, the highest elevation pond in Massachusetts. H arrived first, and I showed up next. Ignoring the no swimming sign, I waded out into the water in an attempt to slow down the cooking of my body. H and I then proceeded to miss a turn and wander down a road. We turned back and found the trail just as J and T had finished their swim.

We were down to just 6 more miles until reaching my car at the south end of the TCT. J and H pulled ahead. I was making my way in relentless forward progress mode. Usually when I start watch watching I look at the watch every .0001 of a mile. I am not sure if it was because I was so happy to finally be on a big adventure, but the miles passed quickly. I would look at my watch and half or quarter miles would pass in between glances at the watch.  I came across another pond and waded in to cool off again. 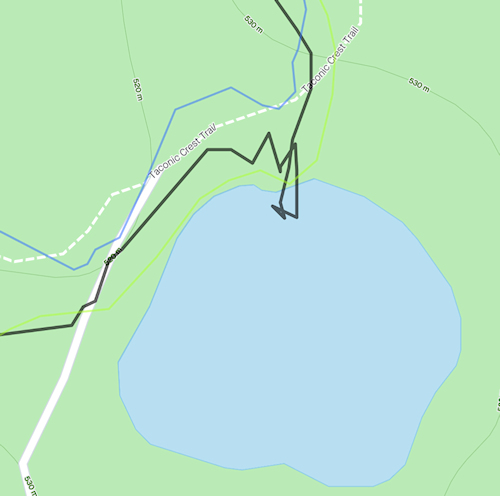 My second swim; mine are the black tracks

I then proceeded to miss another turn and ended up on a dirt road. As I doubled back on to find the trail, J and T were just heading up the hill towards me and showed me where I missed a turn. We proceeded to finish up the last mile and find my car right where we left it. We had completed the TCT!

If you are looking for adventure and a nice place for a long trail run, I would highly recommend the Taconic Crest. The elevation gain is a killer, but the trail is smooth and for the most part easy to follow. I did find some of the traverses to be a little hard to run. There were narrow trails that cut across the side of hills. I would rather have just bombed straight down them than to try and run the slightly tilted narrow path. The TCT is a great mini version of the Long Path, Long Trail, Appalachian Trail and other long-distance paths. It can be done in a day without too much trouble. 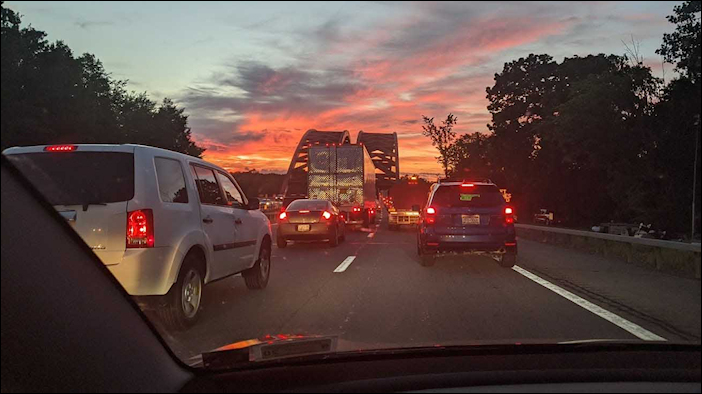 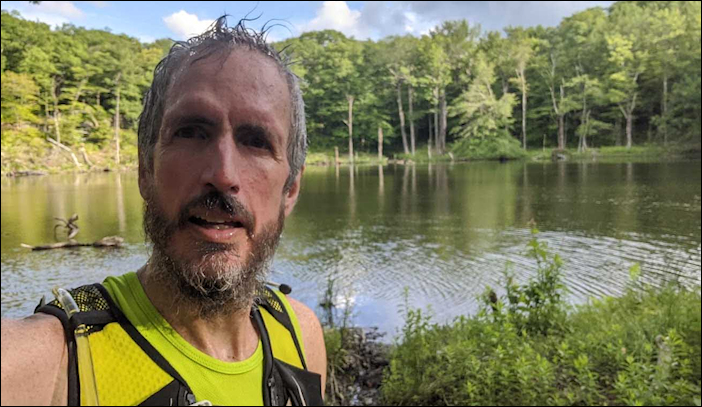 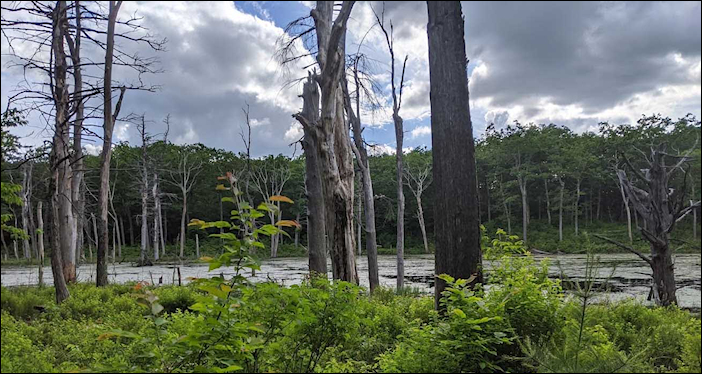 Swampy pond not good for swimming 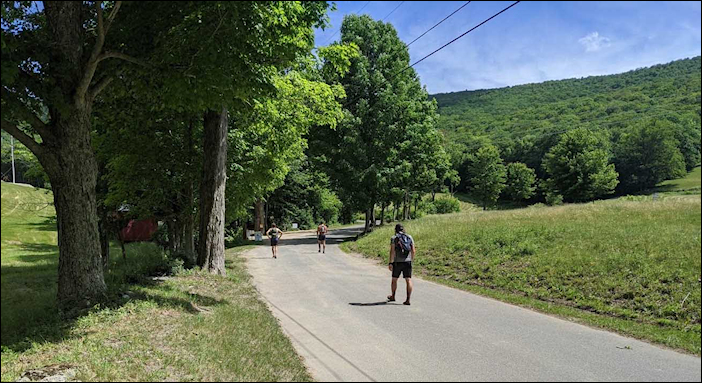 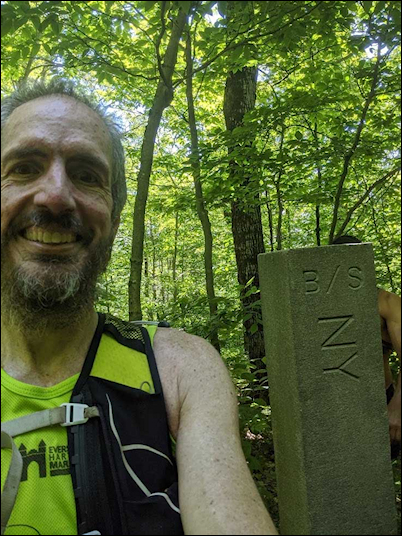 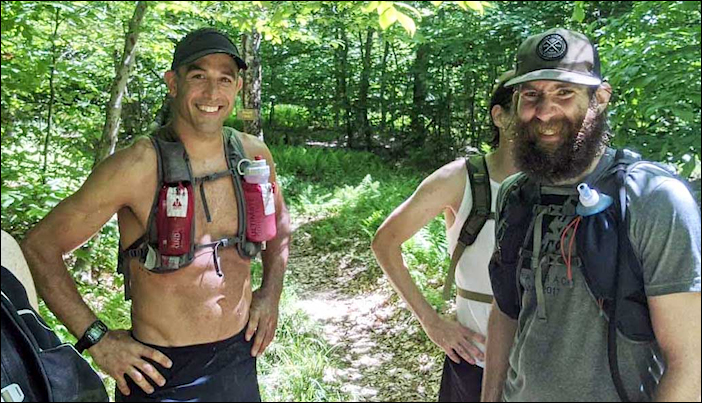 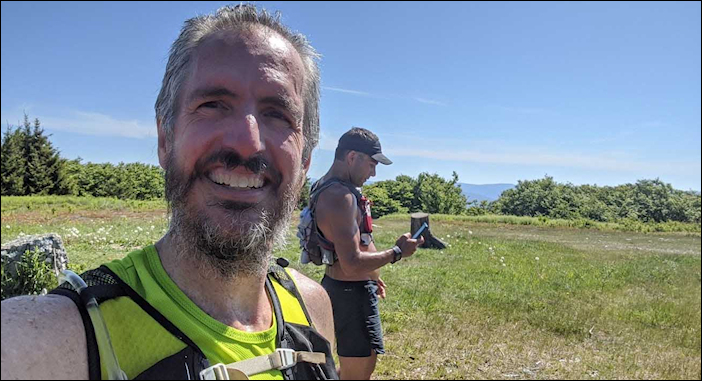 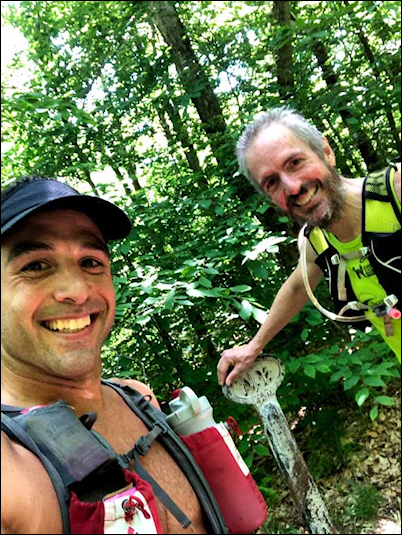 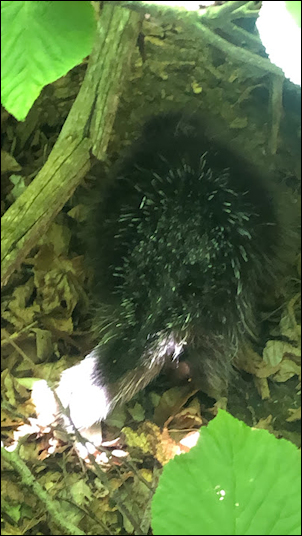 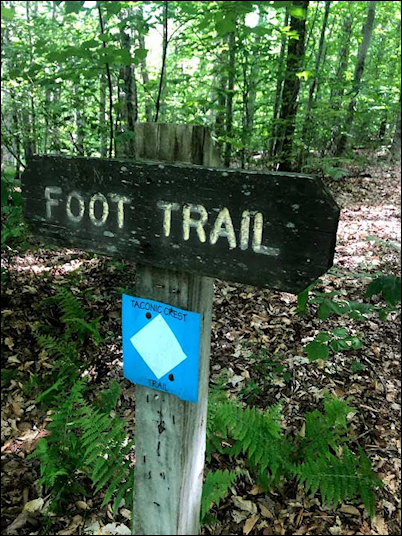