Summer is definitely here. In typical upstate New York fashion, we went from pleasant spring weather to hot and muggy. I am not complaining though. I love heat, I love summer, and summer vegetables. We don’t want to use the oven and spend little time in the kitchen. Cold soups are my summertime staple. It’s a great way to use the bounty of summer produce, and easy to put together. All you need is a blender. Cold soups are refreshing and nutritious. They can be used as a starter for a meal or a light lunch. For a full meal, add crusty bread and a protein filled salad.
The most popular and known cold soup is probably gazpacho. I rarely buy tomatoes when they are not in season. When you have tasted a ripe tomato from the farm, ripened on the vine, it’s hard to go back. I use canned tomatoes in the winter, but comes summer, we eat tomatoes as much as we can.

The following watermelon Gazpacho recipe is from the NYTimes. The feta can be omitted to keep it vegan. We ate it last week, and it is a delicious gazpacho variation. Prepare ahead so that the flavors can blend. Keep in mind when making a cold soup that you might have to use more salt than usual, since food tastes less salty when it’s cold.

The following recipe is adapted from Yotam Ottolenghi, one of my favorite chefs. I have all! his cookbooks and have never been disappointed by any of his recipes. Fennel has appeared at the farm and in my CSA box. I love the strong anise taste. Slice very thin in a salad (pair with apple, avocado, beets), sauté and caramelized with onions. Fresh onions have started to appear in my CSA box as well. Just on time, the storage onions were done.

1/2 cup arak, ouzo or Pernod (this can be omitted, but it really gives it a nice touch. I personally love Pernod mixed with water and ice as a drink as well)

Zest of 1 lemon, half of it shaved into strips, the rest grated

Heat the oil in a large saucepan and fry the fennel seeds for 30 seconds, until they start giving off their aroma. Add the chopped fennel and leeks, and sauté on a medium-low heat for 10 minutes, until soft and sweet – don't let them take on any colour, so add a little water if need be. Pour in the arak, (pernod or ouzo) raise the heat and cook for two minutes, so the alcohol evaporates. Add the water, half the thyme, the lemon strips, three-quarters of a teaspoon of salt and some white pepper, and simmer gently for 10 minutes. Remove the lemon, blitz the soup with a hand-held blender (or in a food processor) and leave to cool.

Once cool, stir in the grated lemon zest, herbs, garlic and (vegan)yoghurt. Taste, adjust the seasoning, then refrigerate. About 20 minutes before serving, take the soup out of the fridge so it's chilled but not fridge-cold. Top with diced fennel or croutons.

The following carrot soup is adapted from Ottolenghi as well. At this point I am so over carrots. We have had them for months during the winter. I am looking forward to young, fresh carrots though. The ones with the big spray of green tops. They are delicious raw in a salad, juiced and as a cold soup. 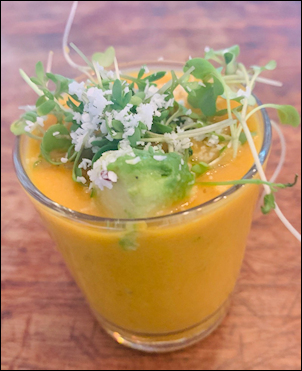 5 large carrots, peeled and cut into 2cm dice (if you have small carrots just cut them in rounds)

1 can coconut milk (tip: don’t buy the cans of light coconut milk. Always buy the full fat ones and dilute with water. It’s a lot cheaper that way and less cans in the garbage can)

Put the seeds in a small frying pan and dry toast on low heat for three to four minutes. Transfer to a spice grinder or pestle and mortar, and grind to a powder.

Melt the ghee (or use the olive oil or coconut oil) in a large pan and add the ground spices, shallots, chili, ginger, lemongrass, and a teaspoon of salt. Cook on medium-low heat for 10 minutes, stirring often, until the shallots are very soft. Add the carrots, and stock, and cook on a low simmer for 20 minutes, until the vegetables are tender.

Remove the lemongrass, and blitz the soup until very smooth. Stir in the coconut milk and lime juice, adjust the seasoning to taste. Chill and serve garnished with cilantro and a wedge of lime.

Another famous cold soup is the Vichyssoise. Traditionnally a Vichyssoise is a thick soup made of boiled and puréed leeks, onions, potatoes, cream, and chicken stock. It is usually served cold but it can be eaten hot. The classic recipe is a cream and butter bomb. The following version from the blog Cilantro and Citronella is plant based and a lot lighter than the original.

All kind of berries, stone fruit melons lend themselves to cold soups as well. Fruit soups can be used as a light first course, a dessert or a light lunch. They are very easy to make, requiring only a blender or a food processor and some basic ingredients. The following recipe is from Food 52.

Place all ingredients, except for the mint, in a large bowl and stir. Place half the mixture in a blender and puree until smooth. Pour soup into a pitcher, and repeat with remaining mixture. Taste and whisk in more cinnamon, honey or even lemon juice if desired. It should taste sweet and tart, with only a hint of cinnamon. Chill the soup until ready to serve. Remove the mint leaves from the stem (discard) and stack the leaves on top of each other. Roll lengthwise into a tight "cigar." Slice crosswise into thin strips. Pour the chilled soup into six soup bowls. Garnish each with a sprinkle of shredded mint and serve.

Food Shopping and Cooking During COVID-19

Cooking During the Time of COVID-19: Chickpea Scramble

The Making of Buddha Bowls with Delightful Dishes Added Anouk is a master chef with degrees from around the world including the Culinary Institute of America. She is a strong believer in plant based eating. She and Daniel Maslowsky offer workshops in their Spring Into Health program.