The Capital Region Track, Field and Cross Country Hall of Fame Set to Induct Its Third Class of Inductees 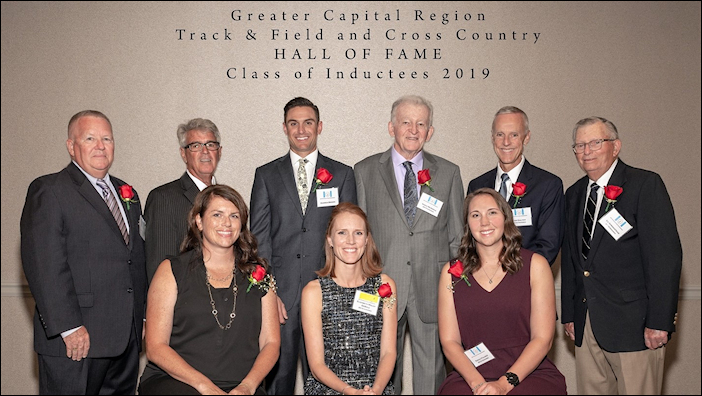 The old and the new – Ray Trail, who set world interscholastic records for Mont Pleasant more than 80 years ago, and Izaiah Brown, an Amsterdam speedster chosen in his first year of eligibility, are among the 2020 inductees for the Greater Capital Region Track, Field and Cross Country Hall of Fame.

Albany’s Ysanne Williams, who competed in the 2008 Olympic Games for Jamaica, prominent hurdler Jeff York of Troy and veteran coaches Dave Petersen (Fonda-Fultonville), Frank Myers (Colonie) and Roberto Vives (University at Albany) are included in the list of 11 for the third class of inductees.

The induction dinner and ceremony are scheduled for Saturday, Sept. 26, at the Albany Marriott on Wolf Road, but ticket sales will be announced later, pending advice from the CDC and state Department of Health.

Trail, a Native American who lived near the Canadian border before landing in Schenectady, was already a running legend in the North Country as he hitch-hiked his way to win races in AAU meets throughout the region, and even gained a reputation by racing against harness horses in county fairs.

Compiling a near-perfect cross country record, Trail scored consecutive victories in the American Interscholastic Championships in New Jersey from 1935-36, setting a meet record the first year. In his only year of eligibility on the track, he broke two world interscholastic mile records, indoors (4:24.8) and out (4:24.4) and lowered the latter mark to 4:22.3. No Schenectady athlete would run a faster mile for 74 years.

Brown also had a strong career at Rutgers University, winning the 400 in the Big Ten Indoor Championship meet four straight years and adding an outdoor title. He left Rutgers with six school records and lowered his personal bests to 10.49 in the 100, 20.68 in the 200 and 45.27 in the 400.

Williams won eight state championships for Albany High School in the late 1990s and dominated the Section 2 leaderboards. She earned a full scholarship to UCLA and had a second-place finish in the 1,600 relay in the NCAA Championships. Winner of both the U.S. Junior Championships and Pan American Junior Championships in 1999, Williams lowered her 800 meter time to 2:02.28 before competing in Beijing.

A solid hurdler in high school, York’s career flourished at the University at Albany, where he was a five-time NCAA Division III champion in the 1990s and was called “the most celebrated men's track & field athlete in University history.” From there, York went on to reach the semifinals in the 2000 Olympic Trials with a time of 13.49 seconds. He now serves as coach at Hudson Valley Community College, where he was named Region III Junior College Coach of the Year in 2019.

Petersen, the Section 2 boys’ track coordinator since 1981, has coached for nearly 50 years at Fonda after setting a Section 2 record for the high hurdles at Johnstown and finishing second in the 1965 state meet. He has chalked up nearly 500 dual meet victories as coach of the boys’ and girls’ programs at Fonda, along with a combined 36 Section 2 and 46 Tri-Valley titles outdoors.

In more than 50 years at Colonie, Myers-coached teams have won 353 dual meets and 82 championship meets. He led the girls to state cross country championships in 1986 and 1999 and has also had numerous individuals and relay teams earn state titles. Myers is a longtime track official who founded the popular Colonie Community Track Meets.

Vives has racked up a combined 57 men’s and women’s America East Conference team championships during his 35-year tenure at Albany, along with IC4A and ECAC crowns. He is an eight-time USTFCCCA Northeast Regional Coach of the Year and an 11-time College Track Conference Coach of the Year.

Smith won three state outdoor and two state indoor hurdle honors from 2008-10, as well as a pair of indoor sprint titles, then went on to excel at Connecticut. Haacke Dillabough won the scholastic division of the Fifth Avenue Mile in 1990, was a state indoor 1,500 winner and ran on an NCAA championship cross country team at Providence College.

Twarog Moulton also landed at Providence, helping the Friars to a third-place cross country finish at the NCAAs, after an accomplished career at Colonie that included  first-place finish in the 1998 cross country meet and both individual and relay state crowns on the track.

Named Athlete of the Meet at the 2004 state indoor meet, O’Connor soared to a state-record 15-10 and went on to clear 17-7 five years later at the University of Washington. He placed second in the 2008 NCAA Outdoor Championships. Hall of Fame Induction Ceremony 2019 for GCRTFCC  in Pace Setter