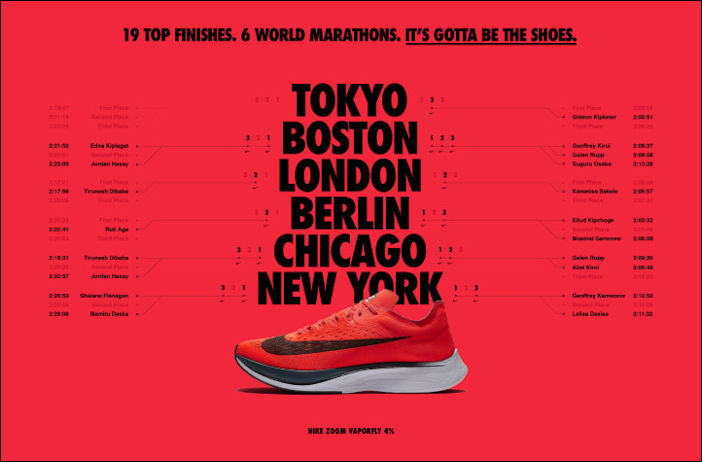 The end of the year is a perfect time to reflect. In the final days of 2019 after the year the running world has experienced, I think it’s safe to say “Hey Kipchoge – Is it the shoes!? It’s gotta be the shoes!!” And even if the first ad campaign was mostly hype, this time Nike got the technology right. Right before Thanksgiving thirty-five years ago, Nike released the Air Jordan I on November 17, 1984. The shoes were special for several reasons. Those first Jordans were simple but elegant. They also marked a turning point in basketball footwear. Until this point, many basketball players donned Converse or Adidas. The shoes were relatively low-tech, with flat bottoms and canvas uppers. Nike’s outfitting of Jordan with his own line of kicks was a calculated risk. Jordan was transitioning from college to the NBA with the Chicago Bulls and his future was mostly just hype in 1984. Nike, known as Blue Ribbon Sports until 1971, was also still a youthful company just reaching its teenage years and looking to transition from running into other lucrative sports.

The union between Jordan and Nike was a match made in heaven and could not have come at a better time for either. Jordan made the transition successfully from the University of North Carolina to the NBA and quickly established himself as one of the best in the NBA. The first legends to wear Nikes were runners at the University of Oregon in the early 1970s, and included the likes of Prefontaine. With Jordan, Nike was positioning itself to successfully navigate the new stratosphere of a billion dollar company. And while they would initially navigate these waters on the feet of Jordan, they would continue to expand and work with other basketball stars. Success on the court opened up doors for Nike to conquer other sports with the Swoosh as well.

A year after Jordan debuted the Air Jordan I on the court, they were officially released to the public just in time for the start of the NBA season in the fall of 1985. Nike’s release was met with enthusiasm as they marketed the sleek sneakers in Bulls – Red/Black and UNC – Royal Blue/ White/Black color schemes to further hype Jordan’s growing fame and transition from NCAA to NBA. The shoes flew off the rack as quickly as Jordan could sink baskets, and sales soared higher than Jordan could fly through the air. Any uncertainty about the success of Jordan or Nike was replaced by a consistent annual release of the new Nike Air Jordan. Each time, Nike toyed with the technology a little and incorporated different aspects of culture and Jordan’s, as well as the Bulls', success into the release. The Nike Air Jordan II shoes, “The Italian Stallion,” were released in 1986 amidst Sylvester Stallone’s success at the box office with Rocky IV, a movie that pitted Stallone (Balboa) vs. Ivan Drago at the height of cold war tensions between the United States and the Soviet Union. 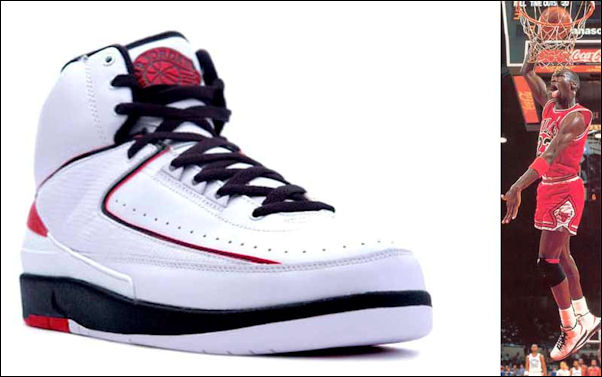 In 1987, Jordan won the first of two back-to-back dunk contests. This would be the only year a new Jordan was not released. Not to worry -- after a year gap the Nike Air Jordan III “Gotta Be the Shoes” was released in 1988. These were the first Jordan sneakers to show Nike’s patented air bubble that it used for cushioning and was the first Air Jordan shoe to feature the Jumpman logo, replacing the "Wings" logo, which had been a feature of the Air Jordans I and II. And boy – Nike fever for Air Jordan sneakers hit hard with the “Gotta Be the Shoes” campaign. It was also 1988 when Jordan won his second dunk contest. Jordan was wearing the Jordan IIIs, air bubble showing and all, when he scored a perfect 50 with the iconic leap from the free throw line. As Jordan sailed through the air in those Nikes he seemed to defy physics and the image would become infamous. As each judge threw up a perfect 10 everyone talked about the airtime. This wasn’t the first time Jordan had sailed through the air in a physics-defying way. Nor would it be the last. Jordan originally leapt through the air in his “jump-man” pose prior to the 1984 Olympics. Before ever wearing an NBA singlet or lacing up a pair of Nikes. Nike used an image of Jordan jumping in the pose to help sell the first release of Air Jordans to the public in 1985. But the Jordan “Air Man” and “It’s gotta be the shoes” now were eternally linked. Nike took to TV and enlisted the help of Spike Lee in the famous commercial with Jordan. In this 30 second clip, Lee asks Jordan over and over again what the secret to Jordan’s success is – “Yo - Mars Blackmon here with my main man Michael Jordan. Mike, what makes you the best player in the Universe? Is it the vicious dunks? No Mars. Is it the hair cut? No Mars. Is it the shoes? No Mars. Is it the extra-long shorts? No Mars. It’s the shoes then right? Nah. Is it the short socks? No Mars. Money, it’s gotta be the shoes, right, the shoes, it’s the shoes. Are you sure it’s not the shoes!? No. It’s the shoes! Money it’s gotta be the shoes!” As the scene fades and Lee keeps prodding Jordan that it’s gotta be the shoes and Jordan assures him it’s not the shoes, Nike flashes “Mr. Jordan’s opinions do not necessarily reflect those of Nike, Inc.”

The Nike Air Jordan IV “Taking Flight” saw Jordan come close to reaching his first NBA finals. And the Nike Air Jordan V “The Fighter” saw him break through to the green pastures of the Promised Land. Jordan was wearing those shoes when he won his first NBA Championship in June 1991. Nike aptly titled the Air Jordan VIs released in 1991 “The Promised Land”. The rest, as they say, is history. Jordan would win his second of six NBA Championships in 1992. Jordan also joined the “Dream Team” in 1992 and won gold at the Olympics. The “Dream Team” demonstrated the dominance of professional basketball players from the United States and marked a real passing of the guard in the NBA from Magic Johnson and Larry Bird to Michael Jordan. The Air Jordan VII “Pure Gold” shoes were released in 1992 and Jordan wore these as he won his third title in 1993. 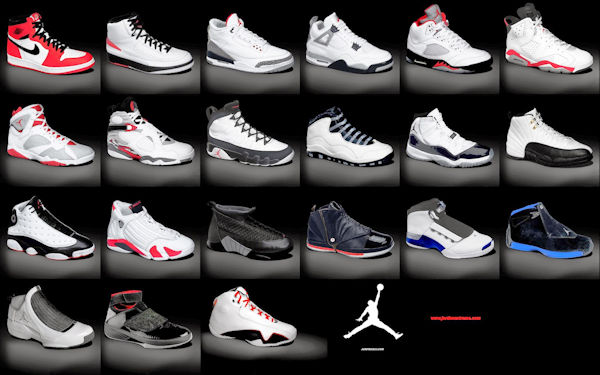 Jordan solidified himself in the history books of basketball and the annals of Nike. At the same time, Nike solidified itself as a billion-dollar sneaker and sporting-wear company. During this time Nike, true to its origins, made strides in running. Nike fitted many top runners on the track and on the roads. Nike outfitted the likes of Bob Kennedy as he became the first American to run under 13:00 in the 5k. Nike released its Lunar foam in the mid-2000s, to great success. Almost thirty years after Jordan first dunked a ball in Nikes, the company began to formulate their plan for the Breaking Two Project, in response largely to the success of Adidas Boost technology. 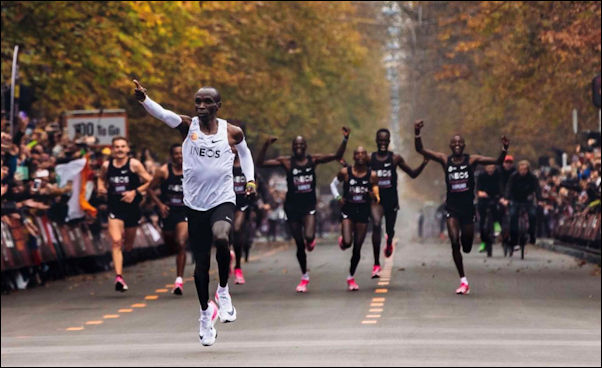 Nike invested a lot of money on research and development and began testing prototypes on their athletes on the roads. The early prototype sneakers were not without problems. Some people may remember Kipchoge winning the 2015 Berlin Marathon with the insoles coming loose and parts of the shoe falling off! By 2016, Nike seemed have worked out the kinks and they made serious plans for an assault on a two hour marathon. The hype was real, and by 2017 they were ready for an attempt and almost hit the mark at the Monza race track in Italy. Nike also released the VaporFly for retail to the public for the first time in 2017. The price tag of $250, and resell value that exceeded $1000 on sites like eBay, underlined the cost of the shoe development and its rarity. Nike refined the VaporFly and researchers and enthusiasts began to test the shoe. Internal research and peer-reviewed literature seem to back Nike’s claim this time that “It’s gotta be the shoes!”  Nike’s VaporFly shoes have been a huge success on the roads and on the free market. Examining the start and finish line of virtually any road race and tracking the times of athletes prior to and after the VaporFly release further credits success to the Nike VaporFly. While the first commercial in 1988 telling the public “It’s gotta be the shoes!” was for hype and helped sell a lot of basketball shoes, this time Nike got it right. The VaporFly sneakers make a real impact on race times of all runners who lace them up. To be sure - Jordan and Kipchoge are both the real deal athletically. And both are, or were, the best at their respective sports. But the VaporFly technology has revolutionized road racing sneakers in a way that is hard to comprehend. If they release a commercial which asked “Yo Kipchoge, is it the shoes!?,” this time the answer will partly be yes – yes, it is the shoes.!

Nike’s Fastest Shoes May Give Runners an Even Bigger Advantage than we thought. NY Times, Dec. 13, 2019.