Running With a Friend 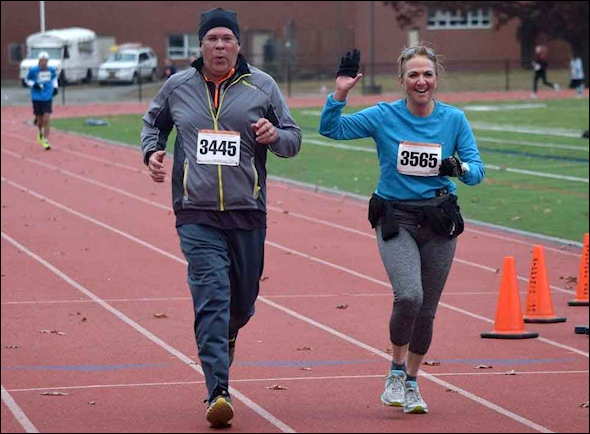 My TV partner in crime has retired. Jim Kambrich and I began anchoring together in September 1994. That’s when WNYT added the 5 p.m. news. We worked side by for a year until he was moved to the morning show. You may remember those days when he partnered with the inimitable Norm Sebastian, a wonderful meteorologist, outdoorsman, and simply a funny guy. A few years later Jim returned to night-side and then in 2003 we reunited co-anchoring the 6 p.m. news. Somewhere along the line Jim took up running and I started ‘encouraging’ him to take on new challenges. He’d demur and then fully embrace the race. It culminated in our Adirondack Ragnar in 2018 and his successful completion of the Tongue Mountain leg for which a special finish line and medal are provided.

So, what’s the point of this article? To reinforce the camaraderie running engenders; to encourage others who might not be confident that they can start or maintain a running program once they cross the 50-year-old mark. Yes, Jim came to running later in life. He’ll tell you it was part of program that helped improve his health. Once on the verge of needing medication to control sugar and blood pressure, he kicked those concerns to the curb with every mile. It also spurred him to undertake a comprehensive training program. He liked to tell me he “had a meltdown,” meaning he’d had his workout at Metabolic Meltdown. 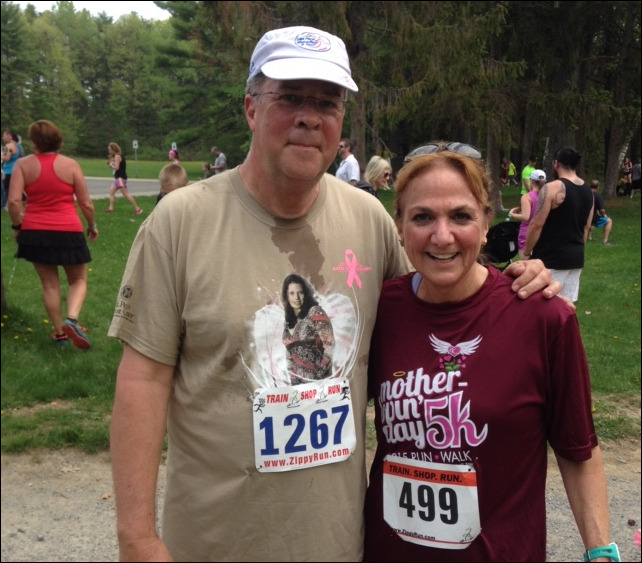 And then there were the runs we did together. I’ve been running for years. I’m a solid middle of the pack runner. I get delight bringing along others, as so many accomplished runners did for me when I was first learning how to pace and race. So, indulge me as I share a race story.

It was the second year Jim and I ran the Veteran’s Day 5k at Shenendehowa High School. He still hadn’t hit his ‘stride’, speed-wise, as he was still relatively new to running. The first year I waited for him as I entered the track at the high school for the last lap. This insured we crossed the finish line together. It was exhilarating. So, when year two rolled around, I entered the track ahead of him, again. I slowed my pace, knowing he was nearby, figuring we’d repeat our finish – you know, together.  Before you could say NIKE and BROOKS  he roared past me, running for all he was worth. And yes, he beat me by a few steps. DUDE ! I call out. “You dissed the gal who brought you to the dance!” He was laughing almost as hard as he was breathing. Oh yeah, he knew what he’d done and like a little kid, delighted in it.  I was not amused, but once I got over myself, I joined in the laughter. And frankly, it was a wonderful moment because Jim had come of age as a runner – he learned he has a wicked, strong kick.

There were other runs – and I hope there will be more. I was delighted to join him for a tenth or two when he completed his first (and he says only) marathon – the 2019 Mohawk-Hudson 26.2 miles.  And he ran the Helderberg to Hudson half marathon – I was out of town or I’d have accompanied him. But by then another colleague was part of our running team, Karen Tararache, who was also on our Ragnar team. She and Jim have been anchoring our 11 p.m. news for a few years. 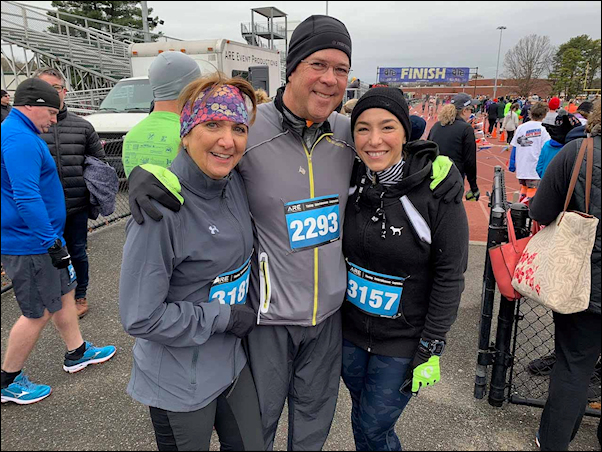 I suppose I could say the anchor team that runs together stays together, but that really holds for all teams. If you have a common bond and understand each other’s goals, the time spent together is much richer. I know that Jim will find new roads to run, as will I. But trust me, when the hills seem particularly high I’ll think of him, so doggedly focused, finishing that punishing run up Tongue Mountain – or the moment he overtook me on the track at Shen and I’ll bear down a little harder, smile a little brighter and find that extra gear.

I hope you all have or will find that running buddy to share moments of accomplishment and joy.

Running It Is!
And When October Goes ...
Healthy Runner: Gaiters – Masks and Life in the Slow Lane
Mindfulness
Runner's Guide to Drinking
Click here for more