Many Roads Much Traveled 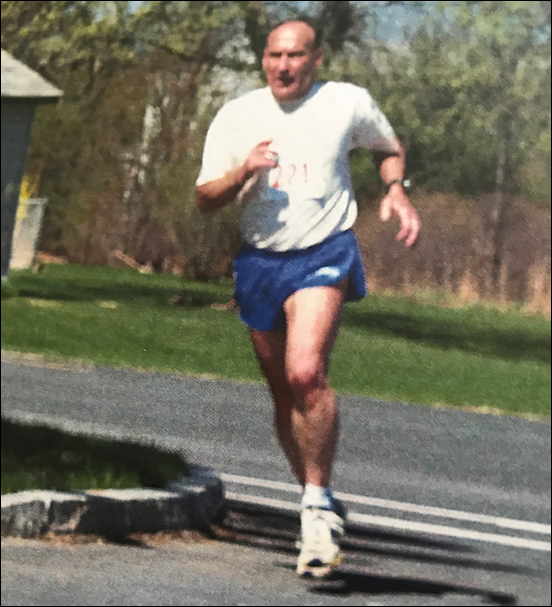 In August last year I ran my 1,000th road race. I had started running in September 1979, one month before turning 40. Last year is also notable for me because it was my 40th year of running and the year in which my years as a runner first exceeded that as a non-runner. I had been captain of my high school track team but my event was pole vaulting not running. I occasionally filled in for a mile relay event when the small team did not have enough runners to participate in all of the individual and relay running events. I lacked the natural speed to be a track runner and there was no cross country competition, at least not there at that time.

In 1956, I won the pole vault event at the Maryland High School state meet. Bob Mathias, twice winner of the Olympic decathlon only a few years earlier, was in attendance as a guest or spectator and congratulated all of the event winners. We formed a line to meet and shake hands with him individually. It was 22 years after high school that I ran again, but it was 41 years before pole vaulting again. In 1998 I saw a notice in the newspaper that a three-day pole vault camp would be conducted at Columbia High School by Don Hood, track and field coach at Abilene Christian University. Don Hood had been the college coach for Billie Olson when he set a pole vaulting world record.  The introduction of flexible fiber glass poles to replace the former rigid steel poles that I had used has greatly changed the technique of vaulting, so I had three days to unlearn the old and learn the new. Day three was conducted like a track meet event and families were invited to attend.  My wife, Gerri came.  She had been a good sport about the whole thing, especially since our wedding anniversary was that weekend.  I have not pole vaulted again since. 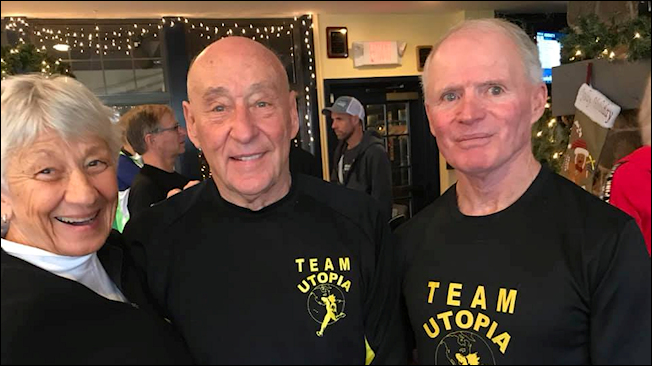 I have been asked to describe some of my running experiences as they might be of interest and, perhaps inspirational, to newer runners. People take up running for a variety of reasons. Maintaining the motivation needed to continue a routine of running over an extended period of time takes commitment, and probably changes in lifestyle. I think that the reason that I have maintained committed is that I enjoy racing. I have never trained specifically for any race other than for marathons, but the desire to run in many races motivates me to run three or four times a week to maintain some level of conditioning. Many runners have no interest in racing but they have some other real or perceived benefit that maintains their motivation.

Motivation is an issue. There are many days that I have planned to run but then for some reason decided to skip it. However, I don’t think I have ever decided to run anyway and then later regretted doing so. On the other hand, the many times that I decided against it, I have usually regretted later that I did not run. It is said that the hard part is just getting out the door.

Having one or more running partners is a great aid in maintaining motivation. If you have planned to meet someone to run at a specific time and place, you are not likely to have a change of mind and decide to skip it. I have had many partners to run with on a regular basis. But there is a risk in becoming too dependent. Running partners come and go.

Injuries of the muscles and joints of legs and feet are part of running, particularly for beginners.  These are overuse injuries and are a sign that rest and more days off are in order. Injuries are frustrating and discouraging. Beginners often give up running because of injury coupled with waning motivation.  Some people are more prone to injury than others, but for most people incidence increases with mileage run and also with age. I have been very fortunate in avoiding injury. In fact I ran for 20 years without an injury. I thought I was immune, but since age 60, I have had occasional injury and now generally avoid running two days in a row.

I have had many memorable experiences in my years of running. I would like to describe a few.

We lived in Maine for four years in the early 1980s. One day I saw a notice that there was to be a race on Peaks Island, conducted as a fund raiser by a church youth group. The award for first place was advertised as two tickets to a closed circuit broadcast of a championship fight between Ray Leonard and Roberto Duran, not that I would be competing for first place. Peaks Island is a small island three miles off the coast of Portland. The only way to get to it is by ferry. It has no high school and the kids ride the ferry both ways every day to attend Portland High School.

The morning of the race I rode the ferry to the island and found the church where the race was to start and finish. It was apparent early that this group was not experienced in organizing road races. There was no course map but we were told that the course basically circled the island, although the coast would not always be in view, and that there would be someone at every point where the course made a turn. The race started on time, but unfortunately, the teenager who was to ride his bicycle to the first turn to direct the runners did not. Many, perhaps most runners, missed that first turn and from that point on never saw a course monitor and never got back on the correct course. When I realized that I was off course I decided to just consider it a run and forget about it being a race. Most of the running was in woods and before long I did not see any other runners. Eventually, I came to an intersection in a wooded area and started straight across, but looking to the left, I saw a group in front of the church a couple of hundred yards down the road. They cheered when they saw me so I made a quick course correction, turned left and ran to the finish and through the tape. I insisted that I had not run the proper course, but apparently no one else had either, and they needed to have someone be the winner. As runners straggled in some boys worked on compiling the results and I overheard one say that they were going to lose a lot of money. I asked him whether they had already paid for the tickets. When I was told that they had not, I told them to keep the money as a contribution to the cause. In more than forty years that is the only Race I have ever “won.” 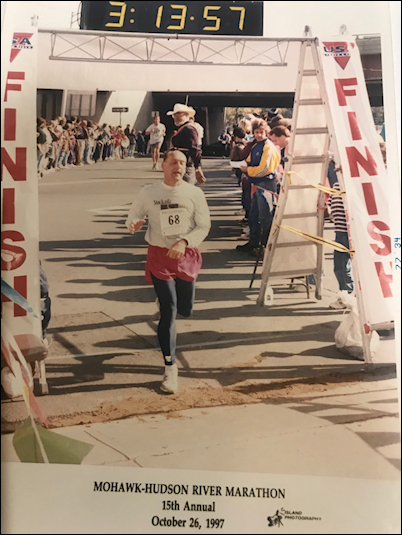 In my second full year of running I ran a marathon in October and a 50-mile ultra marathon a month later. It took place in Maine on the Bowdoin College campus, 12-1/2 times around a 4-mile loop course. I did no particular training for the race and did not know what to expect or what pace I should set, but I rode to the race with a friend who had experience and said not to worry. Driving to the race the weather turned bad. By start time we were in for a miserable cold November day in Maine with pouring rain and high winds. I had on heavy sweat clothes, which soaked with several pounds of water and provided little, if any, warmth. Following the race, there was a pot luck supper and award ceremony. At the ceremony, the race director and MC was ecstatic about the “good pain out there today.” “You don’t get pain like this every day,” he kept saying. He was especially pleased that one runner had come all the way from South Carolina because “They don’t have pain like this down there.”

My first summer after high school, I worked as a laborer with a contractor building a new highway. I got to know a grader operator named Jim Necessary. He sipped whiskey all day on the job and told me that all of the Necessarys drink! More to the point, he had been wounded in the battle of the bulge during WW ll. He said that he would not take a million dollars for the experience but he would not go through it again for a million dollars. That’s how I feel about 50-mile races, at least in Maine in November.

Races that I particularly like I tend to run many times. For instance, I have run the Stockade-athon 28 times since 1982. Another favorite used to be the Adirondack Distance Run that has been discontinued. It had an interesting feature in that there was an age group award given for the first man and woman in every year of age. The race was always held in late June or early July. John Pelton was born in the same year that I was, but his birthday was before the race in early June and my mine was in October after the race. Therefore, he was a year older than I on race day and we did not compete. This was fortunate for me because John was by far the faster runner and he would have gotten the award every year if we had competed against each other. Apparently, the second half of 1939 did not produce good runners. When the race was discontinued after 2017, I had received the award 23 times. By the way, the top award winner at that point was Pat Glover with 24.

This year has not been good for road racing because of the COVID-19 restrictions. I have run 7 virtual races but they are not the same.  They lack the camaraderie and social aspects of engaging with running friends. Running has been an important part of my life, physically, mentally, emotionally and socially. I am not pursuing any record for the number of races run. Brian Teague has been running since high school and is very close to having completed 1,500 races!

So how long will I continue to run? I guess the answer is as long as I stay healthy and retain the motivation. In the meantime, my running logbook grows! 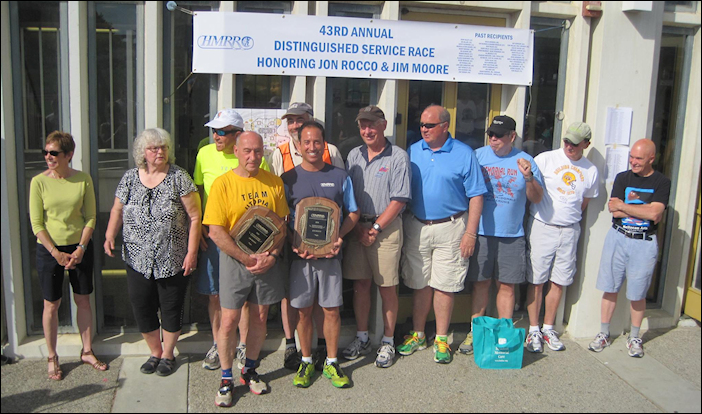