The Inevitable Staircase of Death 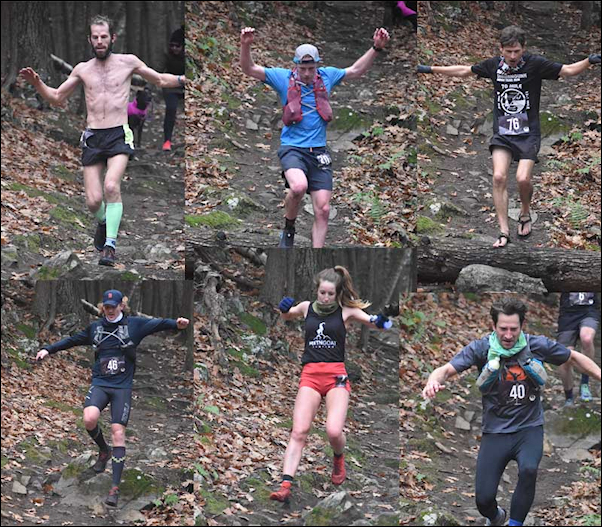 At my relaxed age, I no longer worry about every race. I just like to spend a day outdoors with friends and complete the course as best I can. Or so I tell myself. And while I no longer stress over race times, there is still something inside me that longs to set myself apart, to tread a path chosen not by the followers of the herd, but by those more focused on personal achievement. And so I have gravitated towards ultrarunning then mountain running. Which is often pretty much the same thing. For a number of years I pursued PEAK Snowshoe Marathon in Pittsfield, VT with four rounds of 1,200 elevation gain (and loss) then the Nor’Easter Merck Ultra in Rupert, VT with repeated summits of Mt. Antone. The snowshoe hare left me in his powder, but I plodded behind and finished.

Immediately after this year’s Nor’Easter edition, life as we knew it ground to a halt, thanks to COVID-19. Now that we find ourselves in the valley between the first and second wave, I figured Bill Hoffman’s Mountain Dog Running production of the Moreau Half Marathon might be my last 2020 opportunity to defeat the Grim Reaper. As with the above mentioned events, this would be a reach for me, where simply crossing the finish line would (and did!) justify a chilled bottle of champagne. 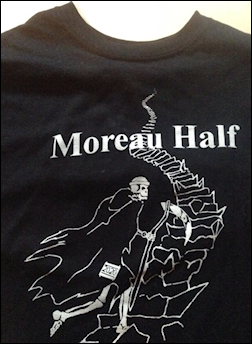 This is an event not to be undertaken lightly. Although I was familiar with the trails, having run the old 15K course, my rule for that park is to never, ever venture out alone, even though I am normally fine with solo enterprises. The terrain is so rugged that it takes monumental effort to watch for markers with roots and rock gardens awaiting every footfall.

What made the difference for me, besides a “later” ultimate wakeup call, was that Moreau is close by so our group made several practice runs. Jen Ferriss, Darryl and Mona Caron (Adirondack Sports) and I split the route up into two exploratory weekends while Jessica and Brian Northan powered through in one round. Since Darryl had generously offered to be the sweep and my support, it was imperative that he know the course. He worked his iPhone and Garmin as much as his legs! 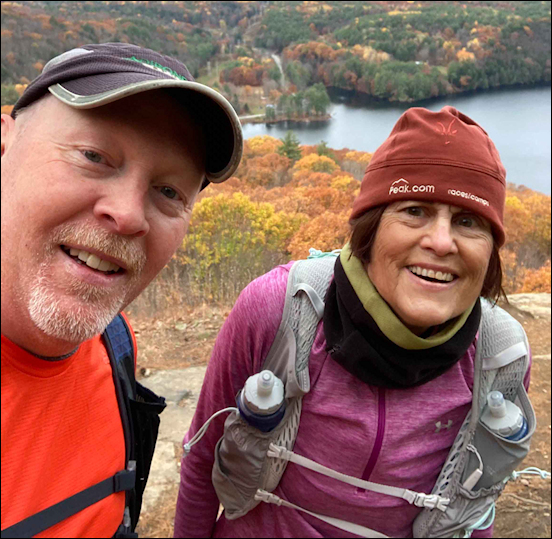 Our original plan was to start early, but the thought of being passed on narrow, treacherous trails by 70 other runners didn’t really appeal. We started off in waves on the sandy beach of Moreau Lake, cheered on by a raucous crowd of barking geese, who also seemed to have their own takeoff flight protocol as they ascended in small groupings to resume their fall migration. It was a heady experience to feel part of something bigger, a finale to the summer season. After a pleasant, blessedly flat tour around the lake, we were treated to a half mile warmup introduction to the terrain, leading to the Staircase of Death. Anchored firmly between miles 1-3, the staircase treated us to 900 feet of elevation gain. It didn’t help that beforehand I Googled the phrase “staircase of death” and learned that staircase falls are responsible for 12,000 deaths per year, being the second leading cause of accidental injury in the United States, right behind automobile accidents. Who knew? In the interest of retaining Darryl’s company, I kept this bit of information to myself. 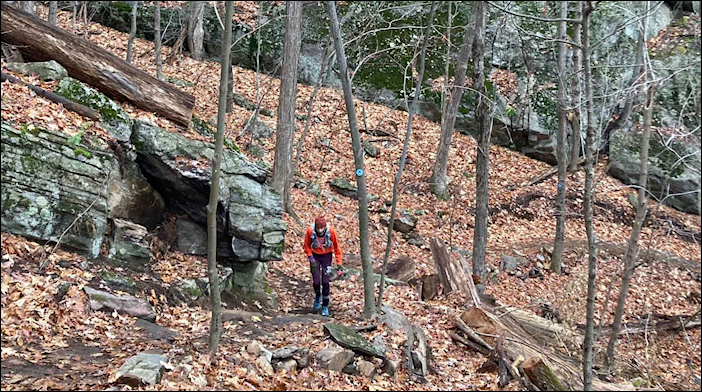 The second two-mile climb up the ridge begins at mile 8 with only 600 feet of elevation gain. But mentally it seemed much worse than the first set being in the middle of the race and attempted on less than enthusiastic legs. The day before, unbeknownst to the RD, some park angels cleared parts of the trail. Naturally, the only serious accident, a broken leg, took place on this cleared patch. The 8-10 mile stretch, however, was not cleared, with rocks and roots buried under inches of slippery leaves. Navigation was made all the more difficult because the zigzag route required you to look up for markers and down at your feet simultaneously.

Somewhere just before this section, I turned left on a clearly marked right hand trail and while I was only disoriented for a few minutes, I lost Darryl up ahead. He had the only phone since we decided we would be together and I wouldn’t need one. Bad decision. Luckily, there were quite a few hikers on the yellow trail because of its great views (at that point I didn’t much care) so they relayed a meeting point and Darryl and I eventually reconnected. Poor Darryl said, “I had one job and I messed it up.” But really, it was my fault. 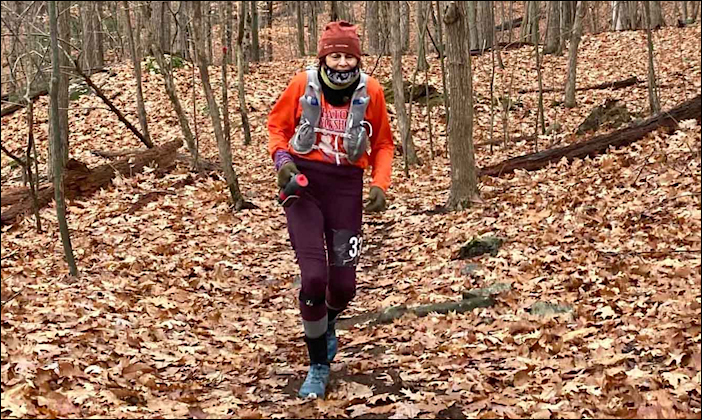 The final three or four miles were really difficult. I got annoyed at myself because I had been looking forward to them and not just because they were near the end. I was disappointed to discover that they were not nearly as simple as they should have been, given the previous tricky terrain. Some of this may have been mental, too. Advertised as a 14 mile self-supported “half” marathon with 2700 feet of elevation gain over winding technical single track, Bill warned that runners should expect to double their road half marathon time. For me this was a moot point as my last half was on snowshoes. Be that as it may, as Darryl’s Garmin approached the 14 mile mark we were still nowhere near done. My only goal was to finish and I knew I could, but it was that extra unplanned mile that sucked me in. Still, by some quirk of fate my bib number was 33, my late husband Jeff’s old Army Aviation call sign (Bulldog 33), and I felt as if he were there at the end, pushing me on, telling me how proud he was of me. I couldn’t disappoint him.

Finally, we reached the sandy beach once more and my two training buddies, Matt Miczek and Jen Ferriss, were still there, hours later, to form a cheering finish line. Usually we carpool, but since April we have been traveling in separate, socially distanced vehicles, so there was no compelling reason for them to remain. Other than that they are truly amazing friends. Darryl followed shortly after, good citizen that he was, with a handful of pink flags.

The geese were landing on the lake, again in waves, for their nighttime rendezvous. I would like to think that these were different geese, a day behind on their journey south. But this being Moreau Park, I wouldn’t discount the possibility that they had gotten lost and were resting up for another attempt the following day. 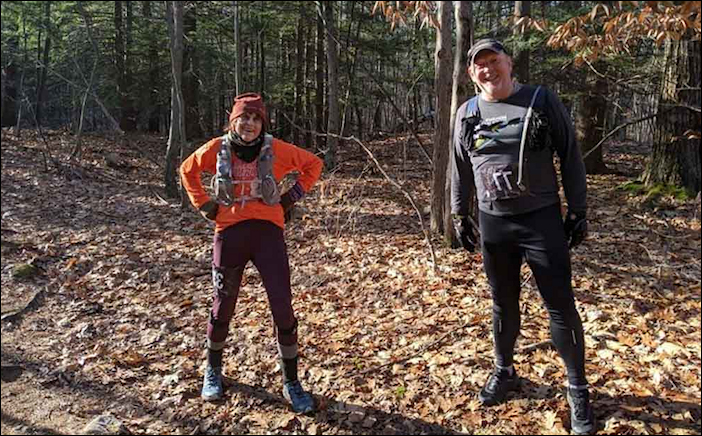 Laura and Darryl ready for the adventure 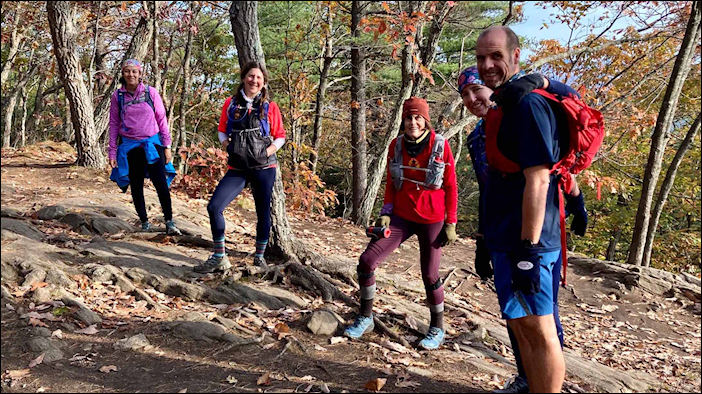 Trick? Or Treat? at the Hairy Gorilla
Behind the Mask: A Life Lived Virtually
Wherein Dodge the Deer Pulls up Stakes Yet Again and Bravely Encounters the Trophy of Death: Or ... The Grass is Always Greener on the Other Side
Tough Mudder Comes to Indian Ladder