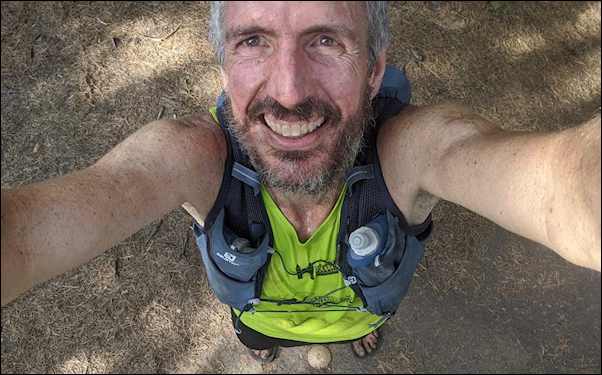 Runners gotta run. With races being canceled, runners have turned to the FKT to fill the void. An FKT is a Fastest Known Time for a specific route. FTKs are tracked for both the longer trails like the Appalachian Trail, and for shorter trails like the Taconic Crest Trail.

There is a very good article on the effects of the pandemic on FTKs on fivethiryeight.com.

That article contains a telling chart showing the recent increase in FKTs. 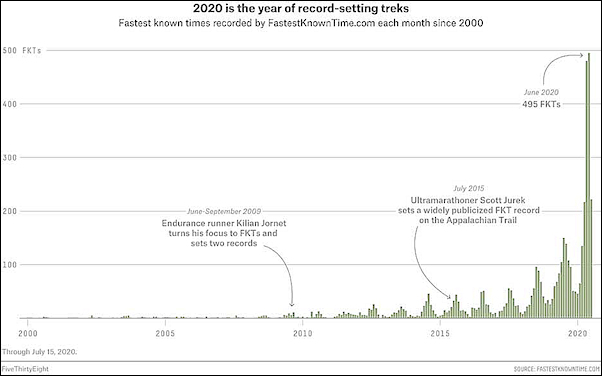 As you can see in the chart, runners have been turning to the FKT to fulfill the need to “race.” Obviously not everyone can set an FKT, but that does not mean you can’t create your own running adventure on an FTK route.

On July 12th, I set out to run the Saranac 6 Ultra Challenge, that you can find here: FTK. The Saranac 6er requires one to climb 6 mountains around the town of Saranac. You start the challenge at Berkeley Green in downtown Saranac. You then drive to each trailhead and run up and down each mountain repeating until you have finished all six mountains. The order you do them is up to you. The path I took was McKenzie and Haystack via the Jack Rabbit trail, Scarface, Ampersand, St. Regis, Baker, and returning to Berkeley Green to ring the 6er bell as the symbolic finish line.

My wife, Naomi, was the race director, crew and driver for the day. We stayed in Wilmington the night before so we could get an early start. I created a set of google map directions that stopped at all of the trailheads, along with a google doc with estimated times for each of the trips.

Despite getting up early, I managed to start a little later than I would have liked. This is the downside of not having an established race start time. At the point we left Berkeley Green it was 6:53 a.m. which is when I started my Garmin Fenix 3HR watch. I paused my watch during the driving sections to capture the whole day so as to not have crazy fast running times resulting from Naomi’s driving. 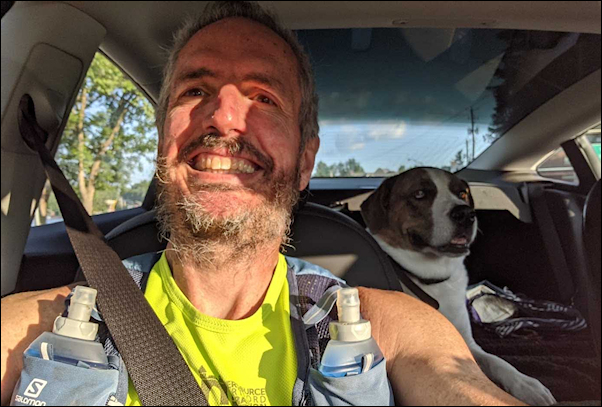 A selfie on the way to the first stop at the Jackrabbit trail head, still bright eyed and bushy tailed.

We reached the trailhead and I took off down the trail for McKenzie, the highest peak of the challenge. About a tenth of a mile in, I had a minor panic attack since I ran off with my cell phone which also serves as the key to my car. I called Naomi on the run to make sure she had found the spare key and was not locked out of the car at the trailhead. She was fine and I was free to run. I had run McKenzie once before from the trailhead off of 86 but running from the Jackrabbit trailhead was new to me. I found out about this approach from Sarah Keyes 6er FTK. While McKenzie was a well-marked trail, I managed to get lost on each of the false peaks despite having done it once before. The trail is an eroded steep clamber up and down rocks and mud. After finishing the peak and returning to the Jackrabbit trailhead all I had to go on was a few words in Sarah’s FKT write up “I made my way to the Haystack herd path just a short jog up the Jackrabbit Trail”. I ignored the marked sign for Haystack since it was 2.5 miles away and went in search of said herd path. I asked a few hikers and they confirmed it would be easy to see with a cairn of rocks marking the way. I found the trail and to my surprise, I found it to be an awesome runnable trail and made the peak in no time, turned around and actually made it back to the car in under 3 hours which was within my time estimate. 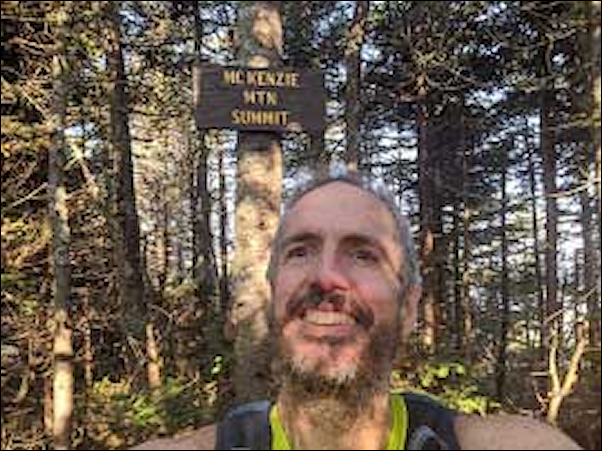 First of the 6 peaks, a rough muddy trail, already got lost a few times. 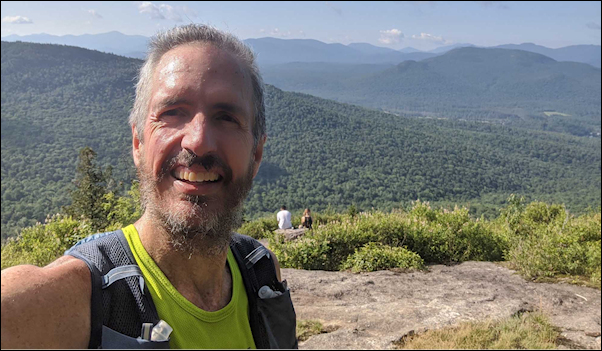 Easier than expected second peak, was able to make up the time lost on McKenzie

After returning to the car I grabbed some watermelon, pineapple, an ice tea, and some smoothie out of the cooler and jumped in the front seat of the car. We were off for Scarface. This is only a 9-minute drive, so I barely had enough time to fill my water and down some food. To keep things from getting messy, I used chopsticks for the fruit which worked out great. We reached the trailhead which is also in a campground, took a quick picture and I was off.

Scarface was not too much for great views, but the trail is great for running. The first couple of miles are a gentle climb through a nice wooded area with a railroad and stream crossing. Then the proper climb is another 2 miles. I did manage to take another wrong turn down a herd path looking for views but found my way without too much trouble. I returned to the car in a little over 2 hours which again was well within my estimation. 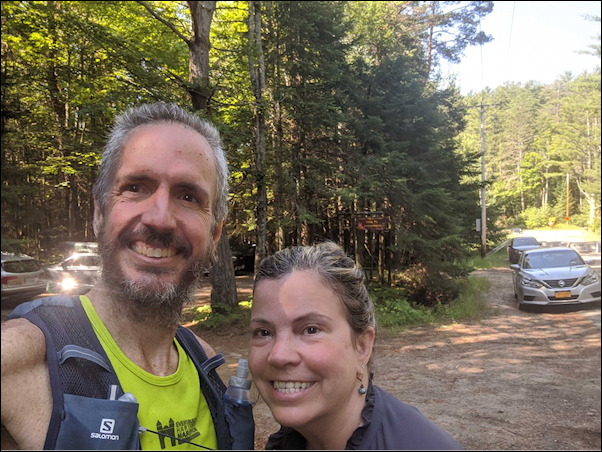 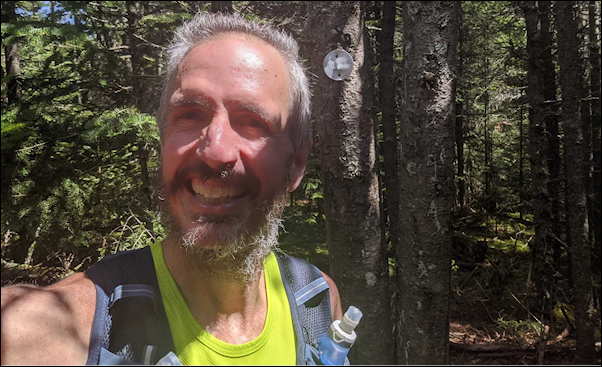 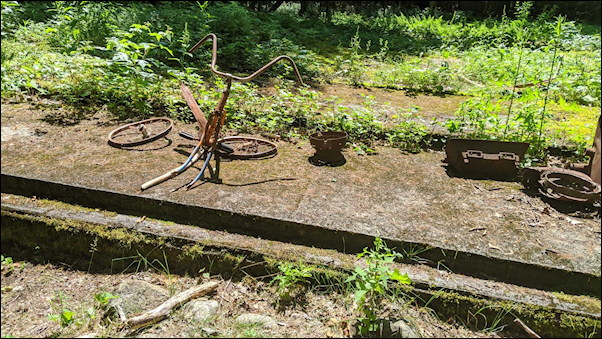 Modern art? On the path to scarface 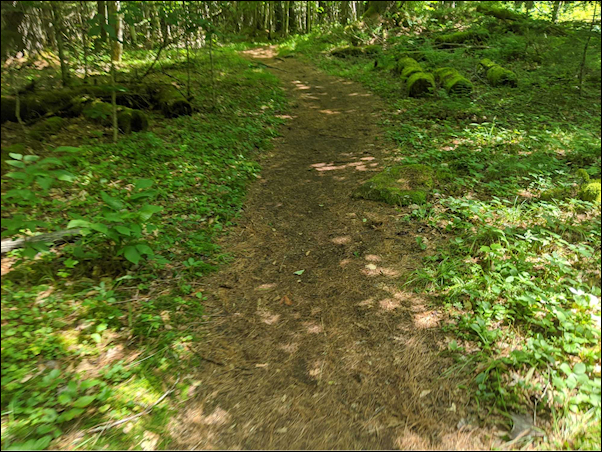 The drive to the next mountain, Ampersand, took about 17 minutes, so I had a little more time. While on the trail, I had decided to move the cooler into the floor of the front seat instead of pulling things out of it at the end of each run. I moved the seat back as far as it would go to make room for all my provisions. This was a much better setup than the first drive. At this point, I had run about 15 miles and climbed three mountains. The day was getting warm with temperatures in the mid 80s. We reached the next trailhead again way too soon. I crossed the road and the first mile of the trail was pretty gentle, but the last 1.4 miles made up for the first part which was pretty much straight up.

But wow, this was an awesome peak! This would be the first peak that I would miss my time budget. That loss in time was well spent gawking, taking in the view, and exploring the peak a bit longer than I should have. On the way down I passed another runner I had seen at the start of the Jackrabbit trail earlier in the day. He announced this was his last peak! He had started earlier than me and obviously had done them in a different order. I admit I was a bit jealous of his being done because I still had two more to go, and it was getting crazy hot out. I made it back to the car in about one hour and forty-five minutes, about 15 minutes late. 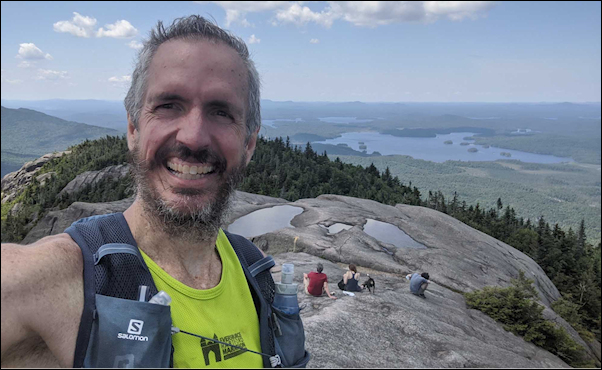 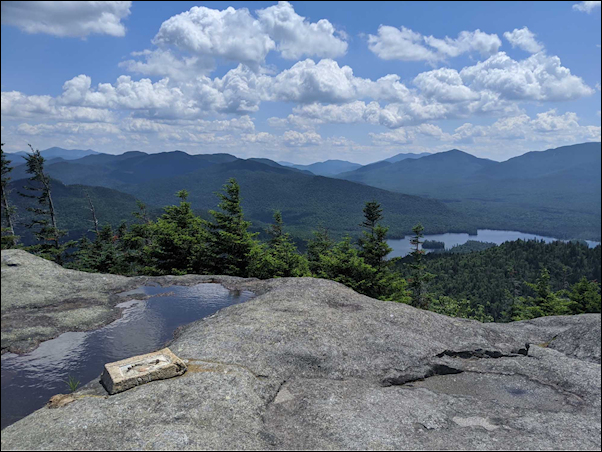 The next drive was the longest one yet with about 29 luxurious minutes of rest and recuperation. I ate as much as I could. 29 minutes is also longer than the auto save on the Fenix 3 GPS watch. So, my trick of pausing the watch failed on this drive. At the point I reached the trailhead and went to resume the run I saw that the mileage was saved! With the shade of the trees and my old man's eyes I thought the saved run was only 18 miles long. Which seemed wrong on many levels as I had run 21 miles and climbed four mountains already. I then spent the next few miles thinking about how I would recover the lost data. 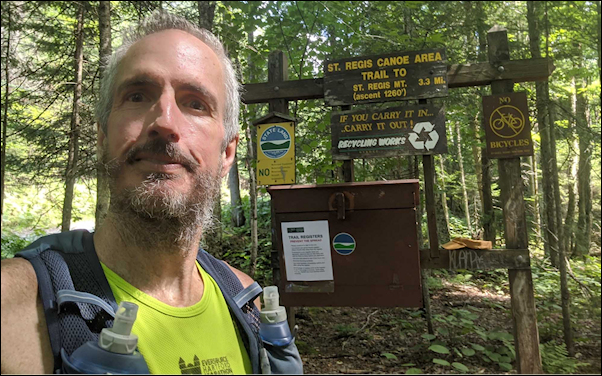 About to start the last big climb

The first few miles of St. Regis are a pretty gentle run which has slight ups and downs. The last mile climbs about 900ft that ends with another fantastic summit with views all the way around and a fire tower to boot. Of course, I had to climb the fire tower. I returned to the trailhead after about 1 hour and 52 minutes right on schedule. Only one more to go! 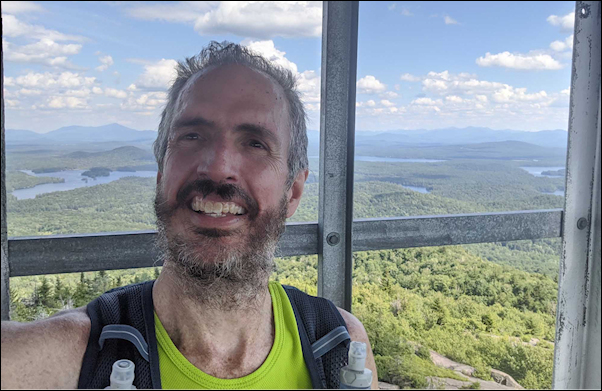 The drive to Baker took about 25 minutes. I had saved the easiest for last. Baker is less than a mile to the top with only 879ft of vertical gain. I was able to refuel and get ready for the last push. When we reached the trailhead, I charged out of the car and ran up the trail. Well, that’s what I envisions but in reality, I more or less hobbled out of the car and walked up the trail slowly with Naomi cheering me on. Each start was a bit slower than the previous one. At this point I was moving like a 100-year-old man. I must have looked worse for the wear because as I passed a woman, who coincidentally was running in sandals as well. She took one look at me and said. “Wow, you did the whole ultra in sandals?” I proudly responded “Yes, I had,” and this was my last peak of the day. After she was gone, I realized that she was able to correctly guess just by looking at me that I had run over a marathon and climbed 5 mountains already that day.

I made it to the peak of Baker in about 20 minutes and I took a few pictures before heading back to the car. I was pretty happy to be back at the car with only had a 4-minute drive to the finish line at Berkeley Green. When we reached the finish line, I hobbled out of the car and rang the 6er bell. The next stop would be Mirror Lake for a quick dip to clean up and then a short drive to the Big Slide brew pub for some food and drinks at the outdoor dining area with Naomi and our dog Taush. 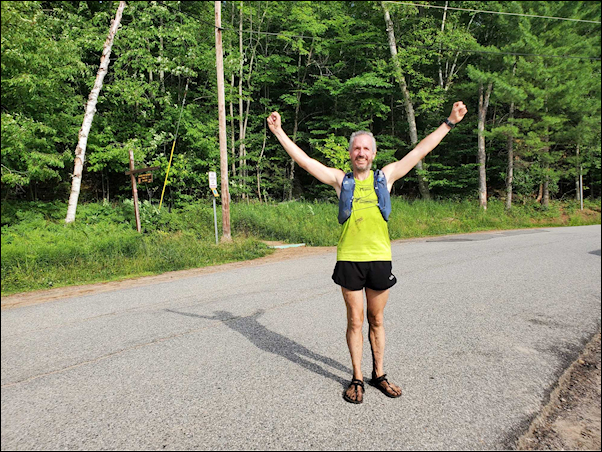 All done running ... well for now that is 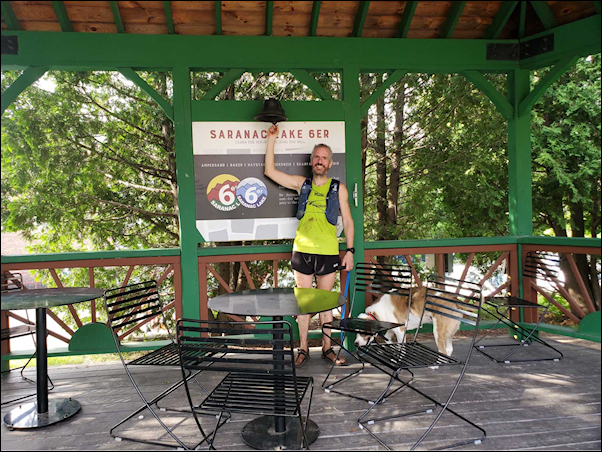 If you are looking for a fun adventure, and have someone willing to drive you around all day (Naomi is not for hire), I highly recommend the Saranac 6er ultra challenge.

Here are my two (thanks Garmin autosave ) strava tracks: 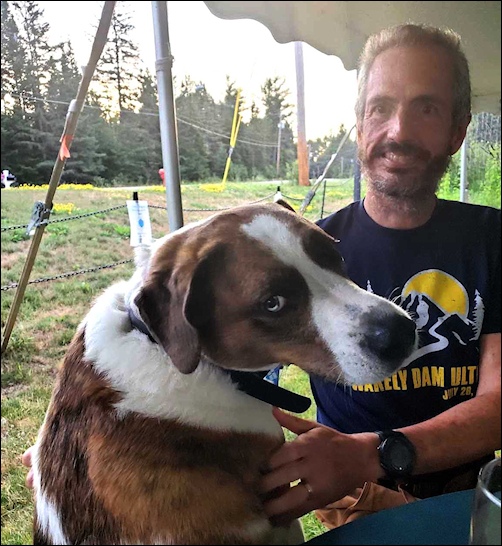