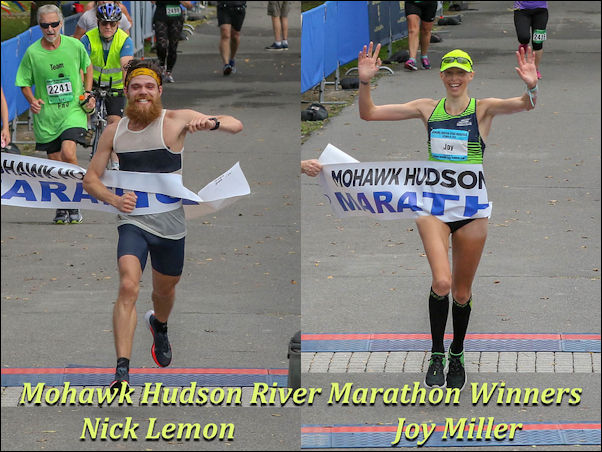 You can almost feel the energy in the force field vibrate as the month of October nears and two of the major races in the Greater Albany Area get closer.

Want to qualify for Boston?  Run the Mohawk Hudson River Marathon on October 13 and you could be running down Boylston Street in Boston to wild cheers in 2020. Both our marathon and half are USATF certified courses.  You have until Monday, October 7 to register for them.  Click here to register

A half marathon is a great way to transition into a marathon and our half marathon is a relatively flat course that’s mainly downhill.  In other words it is a perfect way to start your long distance running career.  Half marathons are the most popular distance race in the U.S. and our Hannaford Half Marathon is no exception.  Our registration is strong but nothing compared to Goteborg Sweden where annually 62,000+ run down its wide boulevards and by its scenic canals. Last year two incredible runners won the Hannaford Half Marathon who are amazingly alike.  Both Samantha Roecker and Dan Lennon are super achievers who excel in their vocations and are elite runners who have qualified for the Olympic Trials in 2020.  No binge watching TV here! 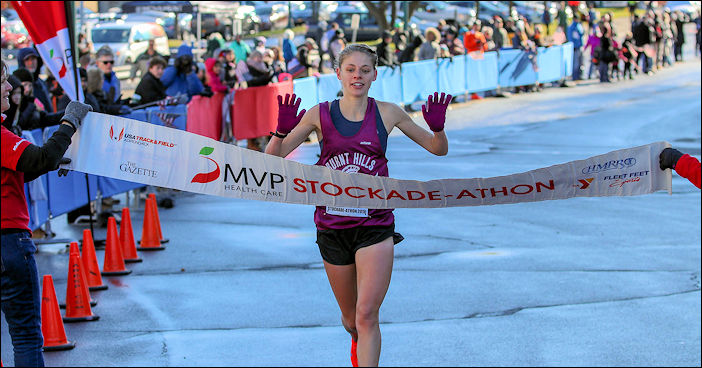 Samantha Roecker, 27, who was born in Albany, has run under the radar for years even though winning many contests.  She competed in the Hannaford Half Marathon twice winning in 2018 in 1:18:32 coming in 10th overall; and in 2016 set the women’s course record in 1:18:09 placing 7th overall. Last year she also captured the women’s title in the Stockade-athon (54:49).   On December 2018 at the California International Marathon (CIM) she stunned the running world by coming in third (2:30:25) seconds behind of the other two competitors placing her 12th in United States female ranking competing in the coming Olympics trials.  Her splits in this race are the envy of most runners: 1:14 for the first half and 1:15 for second. On July 27 at the 2019 Pan Am Games in Lima, Peru, she was fifth in the women’s marathon. You can see her on October 13 here in Albany when she defends her Hannaford Half Marathon title!!!

Roecker is an otorhinolaryngology nurse at the Hospital of the University of Pennsylvania and has two graduate degrees in nursing.  Amazingly, she has no sponsors and runs without carrying any corporate logos. Go, Samantha!! 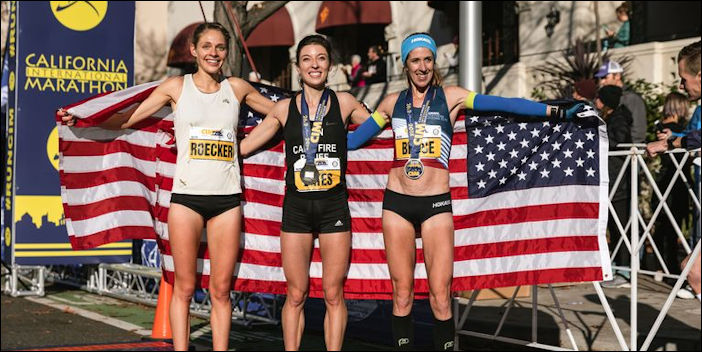 Daniel Lennon, 25, a star runner for Syracuse University, is now attending U Albany Law School.  Balancing graduate school and running has come easily to Lennon but it has not been without its difficulties.  Contending with major injuries in his first year of law school ironically gave him more time to study while contributing to a herculean effort to recoup lost time in training.  It all paid off and Lennon in addition to winning our half marathon in 2018-1:06:12, also came in first in the inaugural Helderberg to Hudson Half Marathon on April 13, 2019 in 1:03:55.

Lennon, like Roecker, is also fluent in the marathon.  After recovering from two major injuries, while studying for the multitude of exams law school is famous for, he decided along with his coach John Aris that he would have his first race in 377 days be a marathon debut!  Stotan Racing is a philosophy developed by his coach John Aris that combines stoicism and Spartan qualities in running. Lennon, as a Stotan racing advocate, firmly believes in its motto: “Run hard. Be strong. Think big.” And has he ever! On June 16, 2018 at Grandma’s Marathon in Duluth, MN, mind you it was his first marathon, he placed 8th overall in 2:17:33 qualifying him for the Olympic Trials in Atlanta, GA on February 29, 2020.

Speaking with Lennon about the upcoming Hannaford Half Marathon, he added a heart-warming comment, “My mother who is a lifetime runner, but never races, will actually be racing the Half there as well!  I’m excited that she will finally be running one!”

On October 13 in the Hannaford Half Marathon, all eyes will be on Roecker and Lennon to see if they blaze further in the record books, and also on Lennon’s mother to cheer her on. 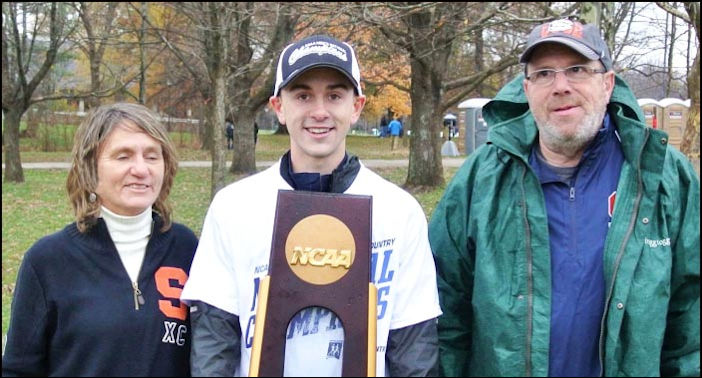 2018 MHR Marathon and Hannaford Half: Winners and More 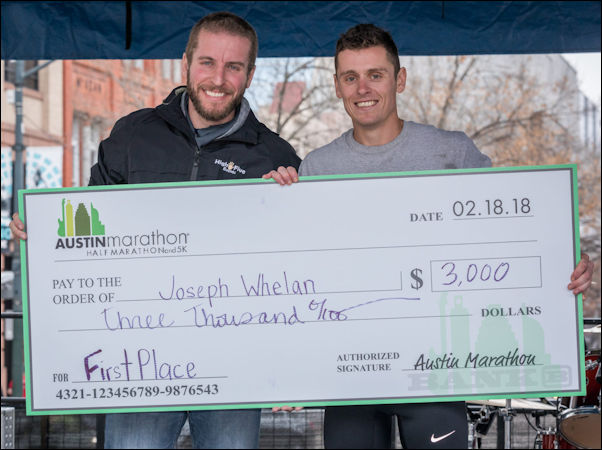 Joe is on the right

Joseph Whelan age 28 was a high school All-American in 2008 and successfully ran for Syracuse University.  This year he won three major marathons in Austin (2:17 1st), Buffalo (2:22 1st), and Grandmas (2:13 4th). His Grandma’s win qualified him to enter the Olympic Trials in Atlanta in 2020. Maybe the MHR will be his lucky 4th marathon win!! 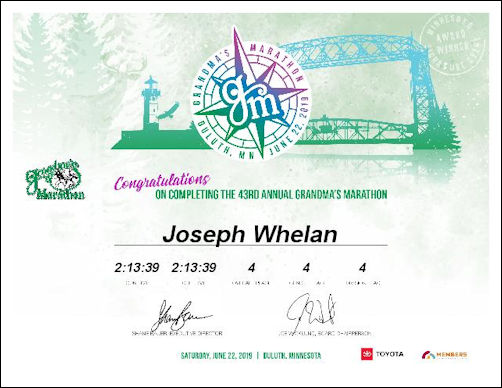 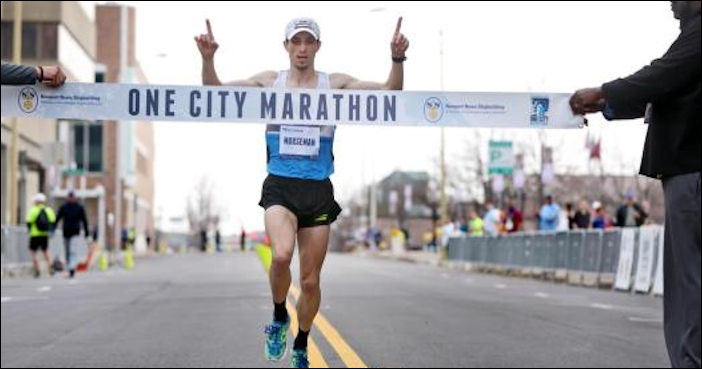 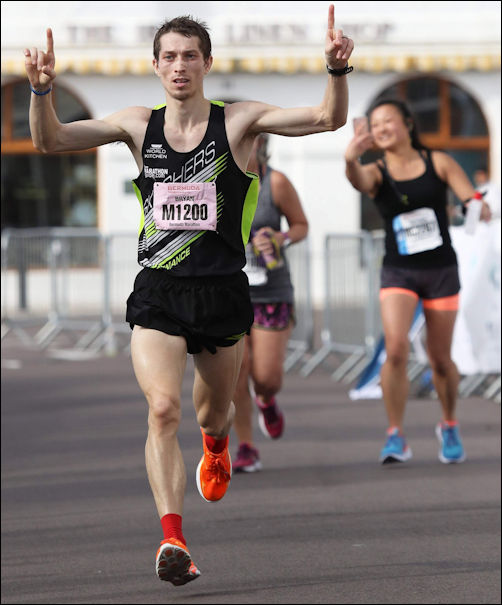 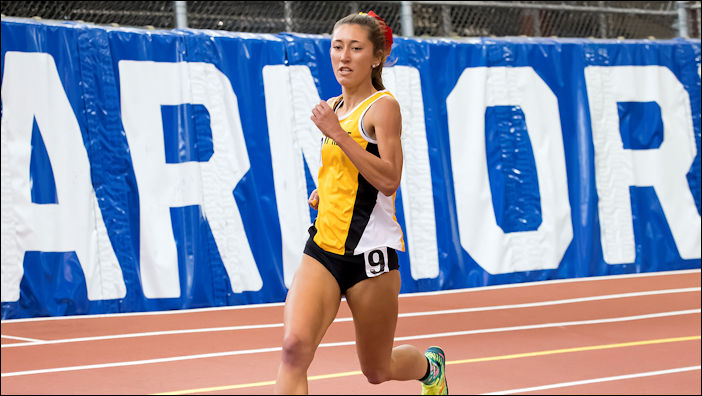 Christine Myers started running late as a senior at Guilderland HS but has been leading the pack since.  At Saint Rose College she set numerous records and is ranked second in the history of Saint Rose women runners in the 10K.  She has been blazing in 5K and 10Ks and is now branching out into the marathon.  This will be her inaugural marathon and she is definitely a top contender to watch.  Since graduating from Saint Rose, she is now attending Vermont Law School. Myers is another super achiever like Dan Lennon. We look forward to watching her running career develop by leaps, bounds and marathons. 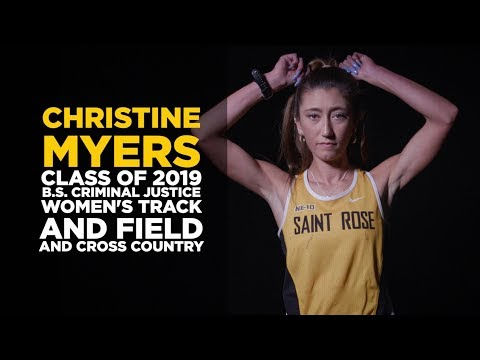 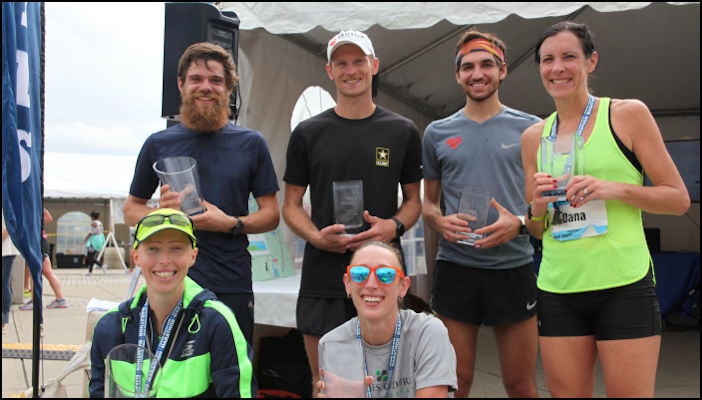 Dana is on the top right

Dana Bush, 41, has come in third overall in the MHR Marathon three times.   Last year was her fastest time where she was 5 seconds short of her goal to do a sub-three hour marathon.  We hope she achieves that this year and who knows maybe even a higher overall ranking.

As mentioned previously, the MHR marathon is a qualifying race for Boston.  A description of the course will give you an idea of why it is an ideal way to achieve this goal. “For the Marathon the course starts at Central Park, Schenectady, and wends its way to Jennings Landing at the Corning Preserve in Albany. The Half Marathon starts in the middle at Colonie Town Park. Both races begin promptly at 8 a.m. Runners’ World has listed the course as one of the “Top Ten Fastest Marathons” saying this about it, “An impressive 30 percent of Mohawk Hudson’s field typically qualifies for Boston. Runners moon over its consistent weather, 370-foot net elevation loss (which could save you 1:53, according to ARRS), and unique “trail” cred. Much of the course follows a paved path that parallels the Mohawk and Hudson Rivers’ gradual descent, meaning no tangents to navigate, no banked roads to curse.”

As runners hurtle down the 26.2 mile course they will see mile marker signs to make the distance go even faster.  For the past several years, BlueShield of Northeastern, NY, has generously funded them in keeping with their aim to keep the Capital District healthy.

Remember, you have until October 7, to signup for these races and compete along with elite athletes from our own area!! Click here to register . 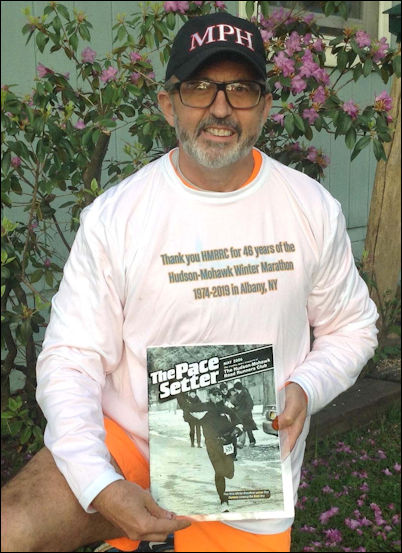 Dan Dominie, 55 of Canton, NY, has been a devoted runner of our Winter Marathon.

In the picture above, Dominie is holding the May 2006 edition of the Pace Setter in which he is shown pictured on the cover racing in February 2006 to his final of five event wins; second only in history to local distance legend Dale Keenan's six wins between 1984 to 1991. Dominie's time of 4:21 at this year's race was his slowest ever, as well his 65th overall marathon finish in his own 45 year competitive running history. Dominie wanted to thank with appreciation, the HMRRC for hosting the Winter Marathon for 46 years. A wonderful event he considers one of his personal favorites in organization, competition, welcoming atmosphere, as well test of racing limits against the harshest elements of Mother Nature's winter best. 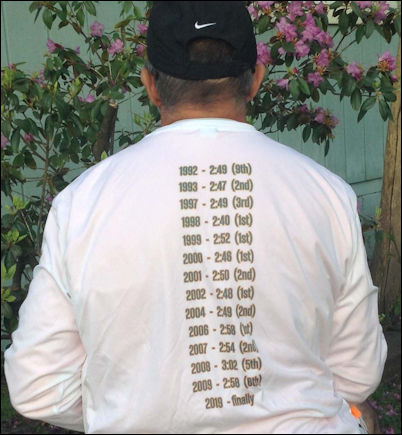 The second photo represents the custom-made race shirt with Dominie's 19 years of finishing history at the Winter Marathon race (the "finally" for 2019 is not a faux pas but actually the redneck spelling for "finale".)