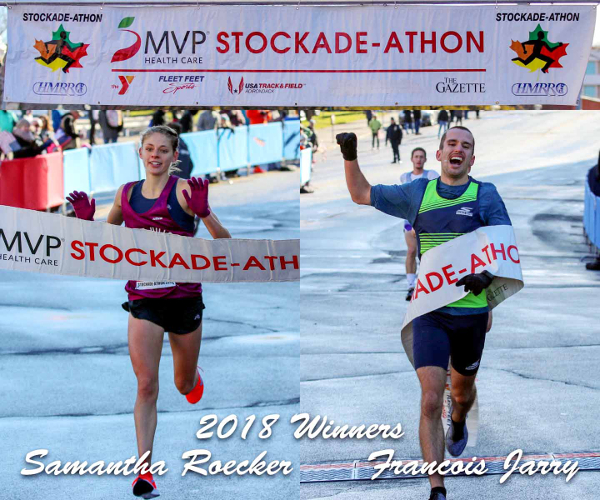 The Stockade-athon is one of the top 15K races in the country. If you are not running it, then why not come to cheer the athletes on. This year is the 44th running of the race, which will celebrate its 50th run in 2025! That’s something to look forward to.

The other elites this year who can possibly smash these records are: Men-Jacob Andrews, John Busque, Patrick Carroll and Sean O’Connor.  On the women’s side Christine Myers who recently graduated from Sienna and is coached by Mat Nark made her debut in the MHR Marathon and easily crushed her competition. She is definitely a person to watch in her inaugural run of the Stocke-athon.  Other women to follow are: Karen Hughes, Danielle Winslowe, and Paula Wiltse.  To be noted, Mark Mindel who is turning into the race mascot, will once again be running the race as he has since its inception.

The prize money has grown and is particularly rewarding if locals place in the race. Local runners are allowed to double dip.  For example, a local runner who finishes first in the Individual Local category and third in the Individual Open category will win $500 ($300 + $200).

In total there is $7,875 in cash prizes, in two categories: local and all-comers.  The prize money goes to single racers and teams.

This year you can either stream or look up individual runners and watch their progress. Click here on race day for streaming results. 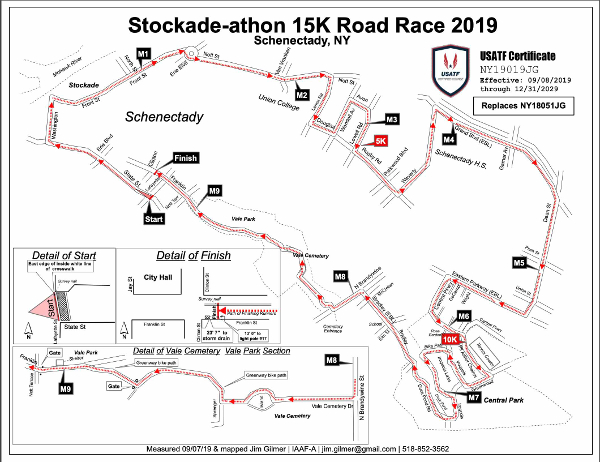 The course wends its way through the historic Stockade section of Schenectady that gives the race its name, Union College, Schenectady High School and Vale Cemetery, and then Vale Park. Due to many reasons the course has changed multiple times but it has always been USATF certified.

Pictures of the Stockade-athon

Other than our crack photographers covering the event, click here, the Times Union covered it in 2018, publishing 122 pictures and 2017 with 139.  Maybe you may find yourself there. If you do a Stockade-athon search on the Times Union you will find many more pictures of the event.  Not to be outdone, the Gazette has 100 pictures from last year’s race and wonderful articles written by the talented Mike MacAdams.  If you search for the Stockade-athon at the Gazette, you will be richly rewarded.

It Takes a Village

Many thanks go the many volunteers who make this race possible. John Haley is the course director and is responsible for coordinating with the Schenectady Police Department.  He also helped make tweaks to the course that should improve traffic patterns and organizes all the volunteer course marshals.  It would be impossible to do this without John.  Jon Rocco and Ed Neiles also help organize.  Maureen Cox does refreshments.  Ken Skinner coordinates the mile splits.  Debbie Beach has run the packet pickup the last few years; and Liz Chauhan has done all our volunteer recruitment and coordination.  Bill Davis has organized the waterstops.  Edward Rosenberg has coordinated the cyclists. Harriet Jaffe does paper registration.  Peter Cowie and Pam Capuano-Hodge of the YMCA helps with logistics.   We are thankful to MVP Health Care our title sponsor, Fleet Feet and the YMCA.  Hannaford and Bountiful Bread provide refreshments.  And great news, the Great Flats Brewery will be offering everyone a free half pint.

So, either walk, race, run or take a car to State Street on Sunday, November 10,  to watch one of the top 15K races in America. You can’t go wrong!!!