MHR Marathon and Hannaford Half Marathon 2019 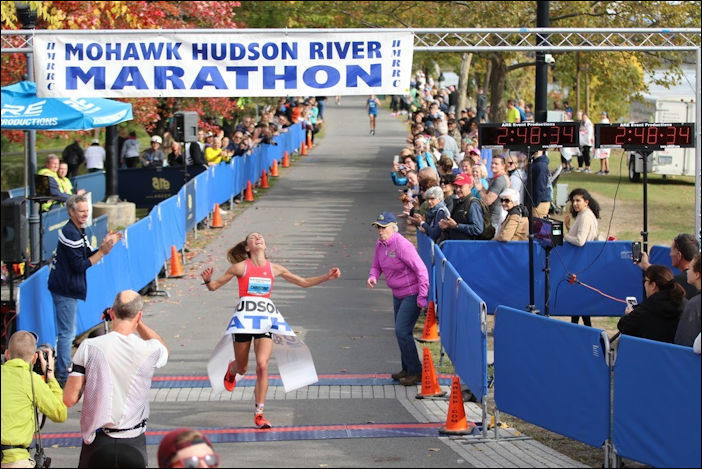 On October 13, a beautiful autumn day meant for running, the Mohawk Hudson River Marathon and the Hannaford half Marathon were held.  The Corning Preserve was humming with activity and excitement as everyone readied for the waves of runners that were about to inundate the area. 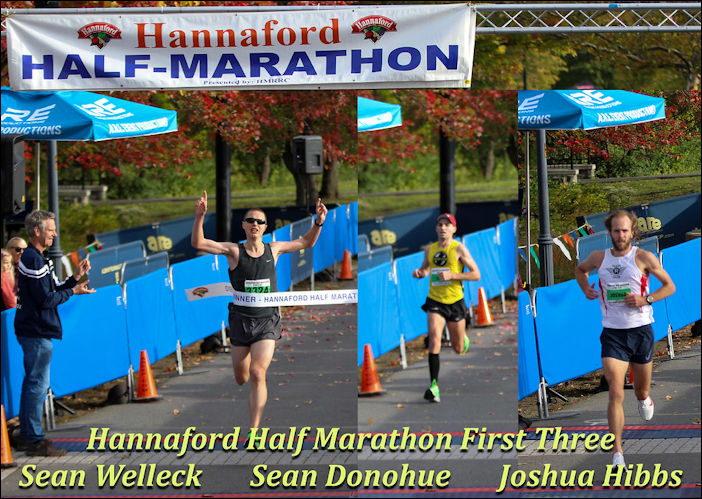 First in would be the Hannaford Half Marathon athletes.  The men’s event was exciting but the women’s was electric.  The top three men were not from the area and although they ran a great race, there were no records set. 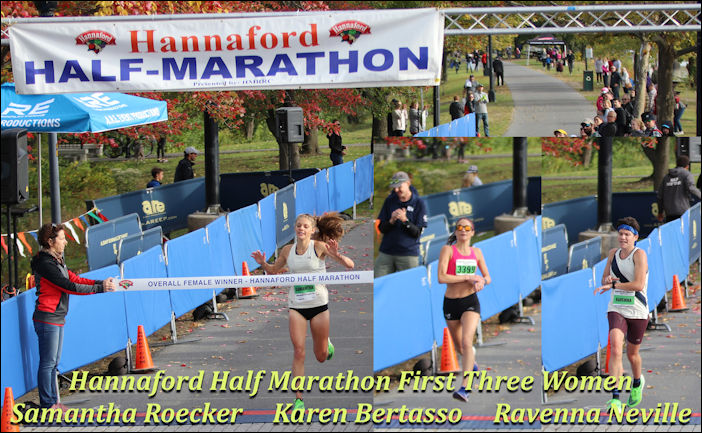 The women’s race was a different story.  The first two finishers both broke the course record 1:18:09 set in 2016 by Samantha Roecker, who bettered her own record in 1:16:58.  Amazingly,  Karen Bertasso Hughes (now happily married), 35, came in second and also broke the old record in 1:17:47.  Roecker, who is Albany born, has also won the Hannford Half Marathon the greatest number of times. She used the 2018 half marathon to tune up for the CIM marathon.  Josh Merlis, MHR Marathon announcer and timer, was kidding her about how she was a little off and she mentioned he was one of her high school teachers years ago and she loved his never-ending jokes. She was the first woman in the Stockade-athon last year but due to other commitments won’t run this year.

Roecker who has distinguished herself in the half marathon area has skyrocketed to near the top of US women marathon runners.  On December 2018 at the California International Marathon (CIM) she stunned the running world as an relatively unknown runner to come in third (2:30:25) seconds behind the other two competitors placing her 12th in United States female ranking competing in the coming Olympics trials.  Her splits in this race are the envy of most runners: 1:14 for the first half and 1:15 for second. (Both better than her record breaking half here!!) On July 27 at the 2019 Pan Am Games in Lima, Peru, she was fifth in the women’s marathon.

She earns nothing from endorsements and works 4 10-hour shifts each week as an otorhinolaryngology nurse at the Hospital of the University of Pennsylvania.  She loves her job and literally fits in running before and after work and on the weekends.  She came to marathons late but loves them and finds that nothing more satisfying than a great marathon run.  We know we will hear more from her at the Olympic trials in 2020. 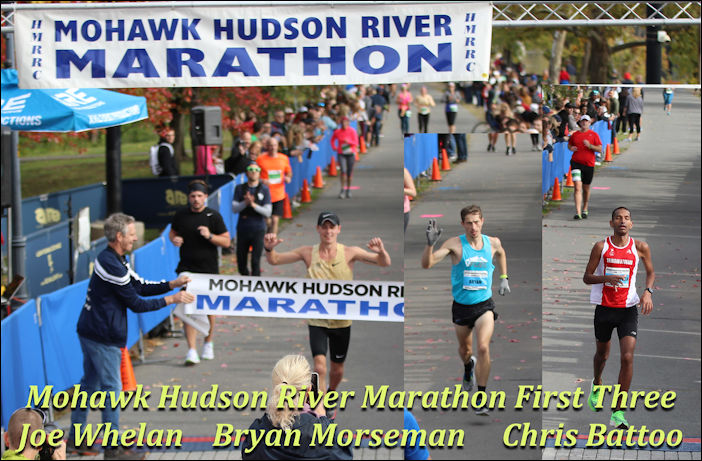 The first three male finishers were not from this area either.  Their times were good but no records were set.  Again, the women put in an electrifying performance. 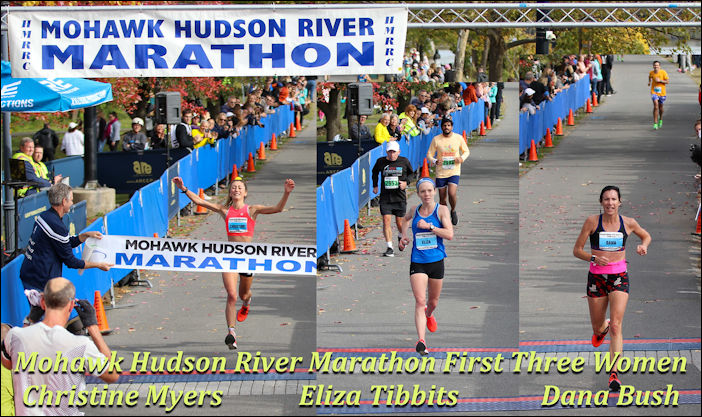 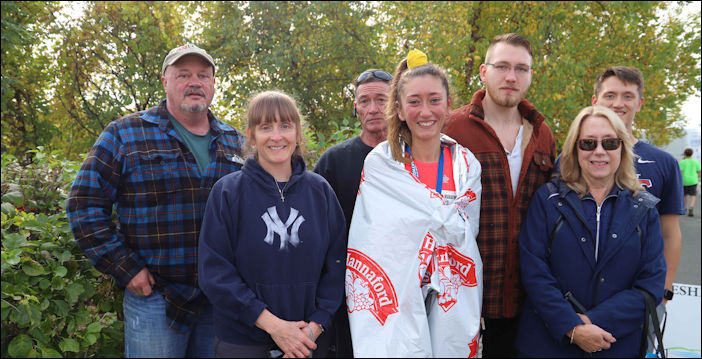 Christine Myers with her family

Christine Myers, 21, a star track runner at Siena College who now is in her first year at Vermont Law School, made her marathon debut with a bang. At the half way mark I visited Josh Merlis in the ARE truck where they were monitoring the marathoners to know where they were and he mentioned that Christine was way ahead of the pack, a position she held throughout the race.  Myers later told me that the person who was supposed to pace her dropped out at the halfway mark because she could not keep up the pace. Myers has said before that if you don’t fall over at the end of a race, you are not running your best.  Collapse she did at the finish line winning easily in 2:48:35 with a 6:27 pace per mile. When asked how she felt she said, “Amazed and in a lot of pain.” When asked how she could train while starting law school, she replied that she drove home for 3 ½ hours every weekend to do 20 mile runs. I addition, in Vermont she runs every morning going out at 4:30 with a flashlight and running on dirt roads that have no electric lights. 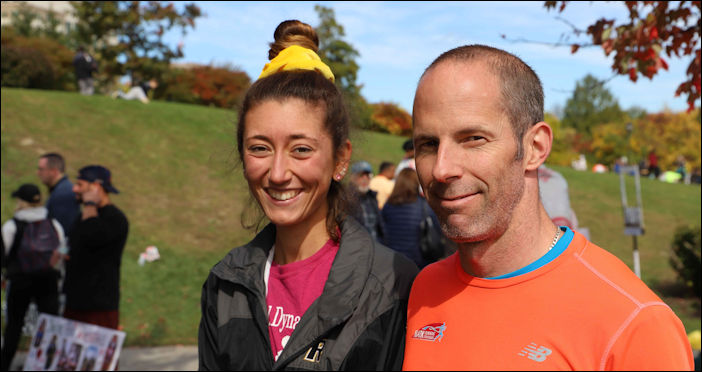 Christine with her coach Mat Nark

She could not have done it without Mat Nark.  “He took someone who was so burned out from college running and revived me.  That man knows what he is doing! “ 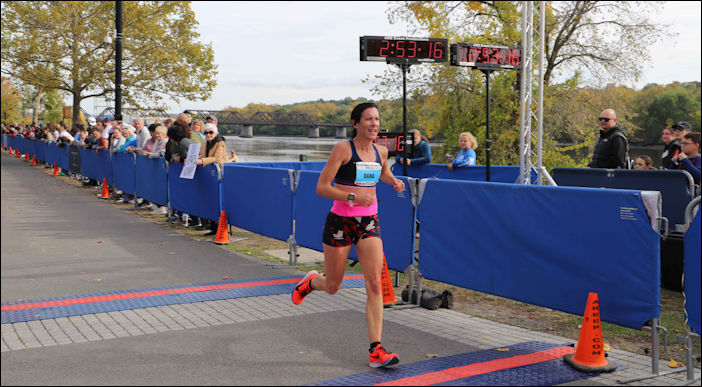 Dana Bush’s third consecutive third place win was exciting and heartwarming.  For the past three marathons she has come in third with a goal of running a sub-three hour marathon.  Last year she was a few seconds shy of that but this year at age 41 her third place win was 2:53:16.  She posits her win to running in the summer when she has reduced hours as a  school principal and is usually home by 5ish and it stays light later, so she can get a lot of training in then . Once school starts, she gets up early to get her training in and then works hard. On the weekends she was running 15-22 miles and sometimes 20 to 22 miles.  She wants to celebrate her win but thinks she will probably turn to conquering the half marathon and 15K races like the Stockade-athons. 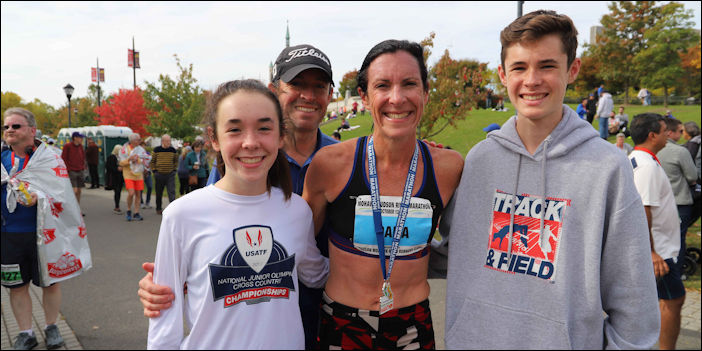 Dana with her family

Praise for the MHR Marathon

When the January 2012 edition of Runner’s World  hit the newsstands on Dec. 6, the Mohawk Hudson River Marathon was on its list of the Top 10 Fastest Marathons for runners looking to set a new Personal Record time.

Here’s what Runner’s World said about the race:

“An impressive 30 percent of Mohawk-Hudson’s field typically qualifies for Boston. Runners moon over its consistent weather, 370-foot net elevation loss (which could save you 1:53, according to ARRS), and unique “trail” cred. Much of the course follows a paved path that parallels the Mohawk and Hudson rivers’ gradual descent, meaning no tangents to navigate, no banked roads to curse.”

Author Mike LaChappelle said that he had run it and that it is “one of the best run and fastest small marathons in country.  If you haven’t run the Mohawk Hudson River Marathon, it’s not too early to start thinking about next year’s race.”  Go to mohawkhudsonmarathon.com to find out more about next year’s race.

A favorite race for runners looking to qualify for the Boston Marathon, the event takes participants along the Mohawk and Hudson Rivers and past the historic city of Watervilet, famous for its munitions arsenal and factory that has been in operation since 1813. The marathon, like the half-marathon, finishes in downtown Albany. 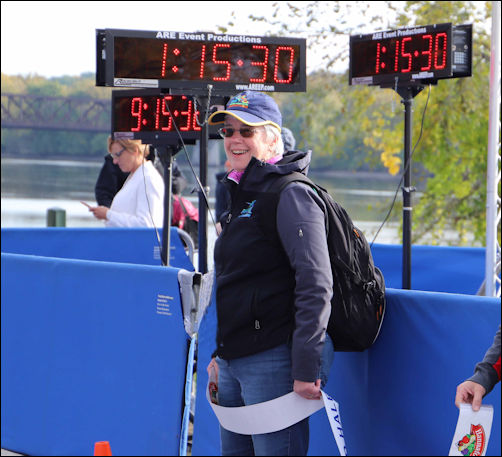 MHR Marathon and Half Marathon Stats