Head to the Warmth 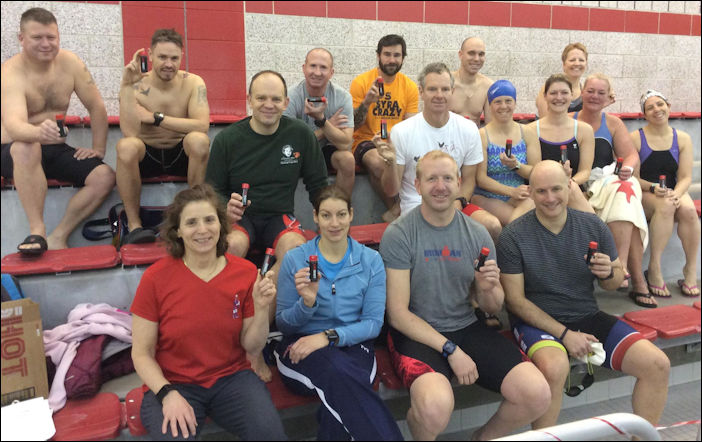 One of the warmest places in the winter is the pool area! Many runners eschew the idea of getting in the water. “I can’t swim.” “The water is too hot/cold.” “I don’t have the gear/access/lung capacity.” The list goes on, and I for one will have none of it! Runners should be in the pool, and let me tell you why.

The natural buoyancy of water can help reduce/recover from injuries. When you are in the water, there is less pressure on your joints. You can work hard and recover quickly. Water workouts can include swimming and/or aqua jogging.

If you talk to Division I run coaches about injury prevention and recovery, they list swimming and aqua jogging as modalities they employ. If they are doing it with 19 year olds, then one would think an aging body would benefit even more!

After a hard run or longer race I will often have my athletes in the pool for a solid workout with kicking. There are a few reasons for this. A 2010 study published in the International Journal of Sports Medicine found that C-reactive protein (CRP) levels dropped after two high intensity run workouts followed by a swim workout - dropping by 23% versus just 5% with a passive recovery session. Interestingly, the time to fatigue in a subsequent run workout was longer with the swimmers than those who had taken a passive recovery session. Recovering faster is something we all want. 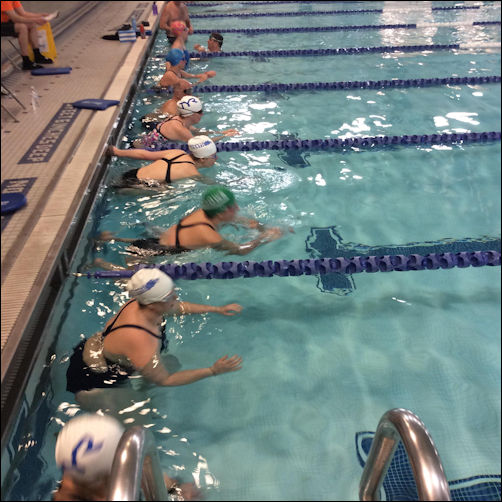 In May of this year, a paper was published in Experimental and Therapeutic Medicine finding that swimming in combination with ibuprofen reduced pain in rats (along with reducing the negative side effects of NSAIDs). There is research showing that swimming can reduce systemic inflammation in the body. That is desirable for any athlete (and I guess the rats in pain too!). As runners who jump in the pool can attest, swimming uses different muscles than running. That is a good thing. We should all strive to be more balanced in muscular strength. Swimming is a fantastic core exercise. That strength translates to the run. A stronger upper body will drive the cadence of the run as you fatigue.

Getting back to the rat athletes, a study in 2017 found that their mice teammates, after swim workouts for 13 weeks, reversed metabolic disorders induced by high fat diets, including insulin resistance and inflammation. Another group of rat athletes, again swimmers, participated in a study published in 2017 in Oncotarget. It was found that swimming is an effective therapy for chronic colitis induced in rats using dextran sulfate sodium (DSS); DSS-induced colitis in rats is used as a model to study colitis in humans. The bottom line is that there is quite a bit of research going on looking at swimming and reduction of systemic inflammation. Chronic inflammation has been linked to certain diseases such as heart disease or stroke, and may also lead to autoimmune disorders, such as rheumatoid arthritis and lupus.

The first thing I hear from runners when they start swimming is, “why am I so out of breath?” You don’t get to breathe as you want when you swim. There is a rhythm and breath holding, or better, elongated exhales and short inhales. When swimming your body needs to learn to better process the oxygen you are taking in with each breath. A 2013 paper published in the Scandinavian Journal of Medicine and Science in Sports found that 18 subjects (10 men) with an average age of 25 were divided into two groups. One group took seven breaths per length and the other group took only two. They completed 12 training sessions. For all of the two-breath athletes, their maximum expiratory pressures were improved by 11% (meaning they can get air out better) and their running economy improved by 6%.

Watch any runner after a tough half marathon and they are hardly able to move! Getting in the pool allows you to easily and gently increase range of motion. Water is a much better source of resistance than air. Many people scoff at aqua jogging, but I can tell you that I’ve had athletes who have used aqua jogging instead of running and don’t miss a beat on the roads. Tim O’Donnell, who finished second at the Ironman Kona just last month (October 2019), did most of his runs leading into the World Championships in the pool. His 2:49.44 marathon propelled him to the fastest time ever by an American on the course, a 7:59.40.

While aqua jogging and swimming might seem boring to runners, it can actually be a lot of fun. Fins, paddles, pull buoys, parachutes, medicine balls and more can make workouts fun and challenging. The biggest hurdle is getting in the water, then getting comfortable and finally knowing what to do! There are organized swim workouts at area Ys, along with swim clinics and swim lessons. I invite anyone to try a masters swim workout on Tuesdays from 12 noon -1 p.m. or Wednesday from 5:30-6:30 a.m. at the Southern Saratoga Y. Click here to learn about swim clinics for those who are beginner swimmers all the way up to those who are highly competitive. If you have questions, feel free to send them to hislopcoaching@gmail.com 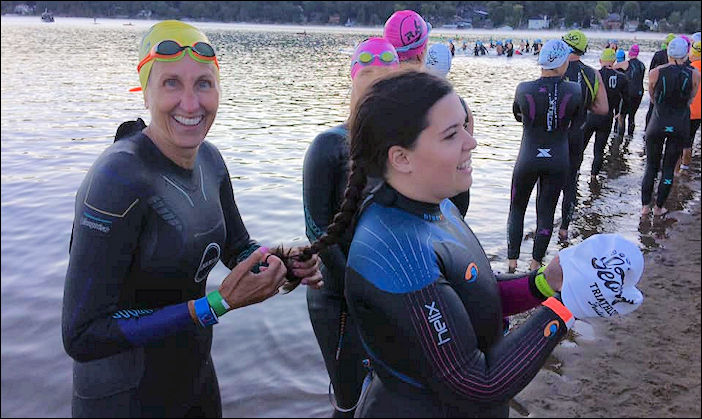