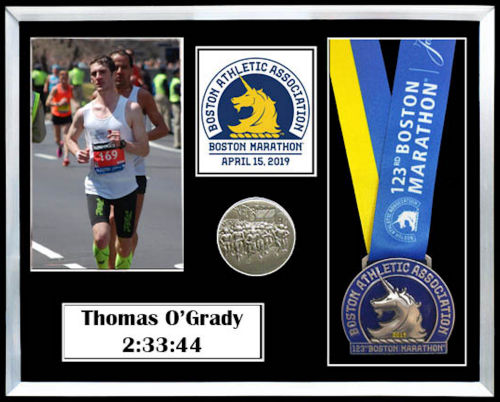 Thank you, I wasn’t aware I was the first local finisher until I read it in the Times Union on Tuesday morning. Several of my friends also sent me the Gazette headline Tuesday morning. I was surprised to see that too.

Boston always poses unique challenges and this year was no different. The weather has not been very good in several of the past years including the historically bad weather last year. I think everyone was expecting the weather to be very good this year. That wasn’t the case. In the week before the race the weather was predicting rain and a low of 38 degrees. As the race approached the temperature kept increasing but the rain persisted. It was very warm and sunny Saturday when I went to the expo. By Sunday night when I went to bed it was pouring rain with thunder and lightning. The thunder and lightning persisted throughout the night. I was a little concerned about what to expect. I stayed near Hopkinton and when I boarded the shuttle to the Athlete village the weather was better but not good. It seemed like it would be a wet day. There was intermittent rain leading up to the gun. When the race went off several of the runners around me slipped on the wet pavement and you had to be really careful.

With the intermittent rain, warm temperatures, and cross wind I decided not to concentrate on time and just ran with individuals around me. Trying not to run too fast on the earlier downhill portion of the first 5k. After a few miles I felt very good and thought I could run well. I was trying to stay calm and run with the group of people around me. I also kept an eye on what groups were ahead of me and made note of runners that I wanted to try to catch up with as the race progressed. The temperature was around 60 degrees at the start and I anticipated it getting hotter and it was already humid. With this in mind I made a conscious effort to drink water or Gatorade at every aid station and then dump a cup of water on my head. This was key as the water on my head felt awesome. I knew the temperature was going to be a factor late in the race.

I went through half in 1:15:11 and felt within myself. I was surprised because I knew I was fit but with the weather I was concerned about this being too fast. I went through 16 miles without a glitch. As planned I had gradually moved up with packs as they went and wasn’t concerned with time. Then came the notorious hills. I’ve usually handled the miles from 16-21 very well but I started to feel it and my pace slowed a little. I was able to maintain a good pace until heartbreak hill and by that point I was really feeling the heat and my quads were not feeling good. The crowds are always great at Boston and I was hoping that I could use the energy to carry me through the last 5 miles but I wasn’t able to run quite as fast as I hoped. I kept trying to pick it up but didn’t have a lot left and just maintained. It was great making the turn onto Boylston Street and seeing the finish. I was really happy with my race this year. This is the first year all three of my kids have been at the family meeting area to great me. Any notion of not running as well as I wanted to went away after I saw them. It reinforced how lucky I am.

Were you surprised to find out that you had come in first in the Greater Albany area?

I love the Boston Marathon. It’s one of my favorite races. Everyone who runs has a race that really means something to them. I think Boston is my favorite race. The first time I ran it was in 2008 after I had graduated from college. There is a picture of me making that was taken as I was making the turn onto Boylston Street and I have this smile that is literally from ear to ear. It’s one of my favorite pictures I have of me running. Probably one of the only one of me smiling as I’m finishing. There is just nothing that compares to the crowd and the atmosphere. Everything about it. That final turn onto Boylston Street is electrifying. You can feel the energy in the air. Being the first finisher in the area is an honor. We have a lot of very good runners in the capital region. Historically I have run well at Boston and been among the top local finishers. But with the strength of runners in our area I never expect anything but it’s always an honor to represent the capital region in running.

Were you grouped with the elite?

I was not with the elite athletes. I've never been fast enough to get into the elite grouping. In years past you typically needed to be between 2:22-2:24 to get an elite bib for men. This year was among the fastest elite fields they've ever had. And I believe you needed to have a time under 2:20 to run in the elite section. They made an additional change this year. The elite women started 30 minutes earlier at 9:30 am. Then at 10:00 am the elite men started. Then 2 minutes later at 10:02 wave 1 started. I started at the beginning of corral 1 in wave 1. My experience was not that much different than years past. But I liked it when the elite men started at the same time as the rest of wave 1. 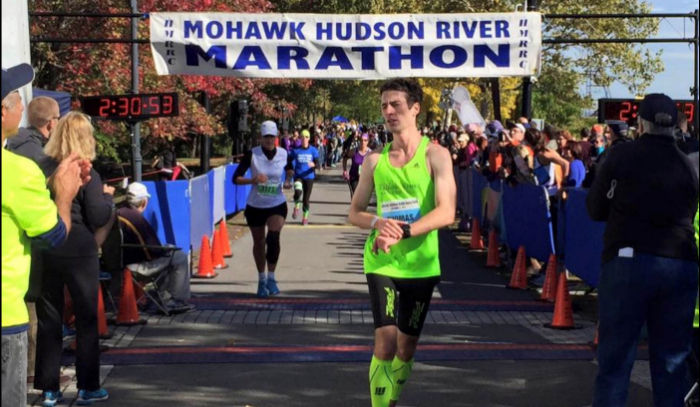 Can you compare it with the other Boston Marathons you ran?

Yes and no – a race like Boston is unique and all of them special. Each one is always different from the others. It’s usually the only race in the spring I care about besides maybe a half marathon. I would say this year was particularly special for me. But so were several of the others. This one probably compares most to my first Boston Marathon in 2008. In 2008 I was a relatively inexperienced post collegiate racer. At the time I didn’t have a good idea of what to expect from the race or the marathon. People told me horror stories about Heartbreak Hill. But once the gun went off I just remember having fun. I just remember having fun that year and running better than I was expecting to. I had just met my wife a few months before and it was the first trip we went on together. In 2012 I was supposed to run but I picked up Coxsackie virus and was not able to run because I was hospitalized with a 104 fever the night before. I came back in 2013 in the best shape of my life and broke 2:30 for the first time. That was a really special year but it was overshadowed by the bombings. I remember (and still am) really torn about that year. I just remember being on top of the world for about an hour and a half and then I saw the bombings on TV and it just changed everything about the day. I came back in 2014 and ran another personal best. That year was special not only because of how I ran but there was a lot of efforts to memorialize what had happened in 2013. I remember talking to one of my best friends after the bombing in 2013 and we both agreed that we would run in 2014 as a matter of respect to the victims. My experience in 2015 wasn’t great. The weather was bad, I had a cold, and it was the first time I hadn’t run a personal best at Boston. The magic can’t live forever I guess.

Then my running kind of entered a really dark period. I was supposed to run Boston again in 2016 and then I tore my Achilles tendon while doing a workout at a local Winter Series in February 2016. I went and cheered that year at the finish line. I had a number of friends running and it was great watching them finish but at the same time it was also just a really depressing year being on the sidelines. I vowed that day that I would be back to Boston in 2017. But it didn’t really happen like that. Despite physical therapy and doing everything I was supposed to I ended up having to take over a year off from running. I didn’t go to Boston cheer in 2017. I had just kind of started to hate running all together. By that point I would say I had just given up on running. It was a really weird thing because it was something that had meant so much to me since I was in high school and I just didn’t want anything to do with it anymore. I had decided I would maybe jog and bike or swim to stay fit. But I stopped thinking about racing at all. I was sure my racing was done.  It was miserable and it wasn’t until August 2017 after my daughter Evelyn was born that I actually was able to do anything that resembled training. Things changed then and I started walk jogging with her in the stroller. It really breathed life into running again for me. I entered a couple of road races in the fall 2017 and they did not go well at all. But I decided to embrace the suck. Then in spring 2018 things kind of started to click again and I felt fit and competitive enough to run a qualifying time. I decided to run the New Jersey Marathon. I ran a qualifying time there and it felt like a huge weight had been lifted from my shoulders. I never thought I was going to run another marathon again let alone another Boston. My goal running wise over the past year has been to go back to Boston and run well. Last month after the New Bedford Half Marathon I knew I was getting into shape and I was excited to run. I had other goals in mind but with the weather I just tried to enjoy myself and I did that. And with that this was in many ways like my first Boston all over again.

Bringing Up the Next Generation: A Family Affair  October 2018