Reflections on Freihofer's Race for Women 2019

In general I was really pleased with my performance at the Freihofer's Race. The weekend prior I finished my NCAA racing season (unfortunately) prematurely so this was the perfect "pick me up" after a disappointing race in Jacksonville, FL at the NCAA East Prelims. I was hoping to qualify for the NCAA National Meet in Austin, TX, but finished 17th where only the top-12 get the ticket to nationals. About two days after my race I called Coach Jones up and told him I did not want to end my year on a disappointment and I signed up for Freihofer's the next night. I told him that I wanted to just race and have fun. I think sometimes we competitive runners get so caught up in winning a race that we lose sight of why we do it and for me it is because I truly love to run. My race plan at Freihofer’s was to be feel strong and have fun. I can genuinely say I did that! I felt strong going up the hills through Washington Park and progressively moved my way up through the pack: although I know there is more left in the tank this race was exactly what I needed. I think it also got me even more motivated for my next set of goals: making it to Nationals in Cross Country and enjoying every last minute of my final year at Albany.

My boyfriend's mom who is a Coach at South Colonie HS introduced me to this race while I was training for US Junior Nationals during my freshman year at Albany and I have raced it each year since then. I love everything about this event. I knew that it would be the perfect "recovery" race for me because of the atmosphere. Women empowering women-- there really is nothing quite like it. I also really appreciate how much of a community race this is. I am a native out of Clarence, NY (suburb of Buffalo) and I only wish we had some sort of race that brought each so many young female athletes together like this. I know that this race will be something that I will continue to come back for each year, so much fun and so much talent! 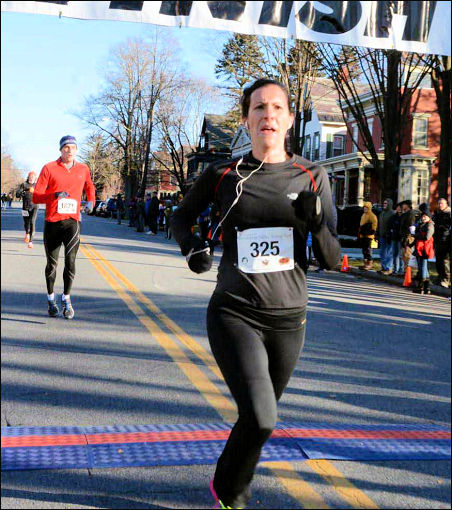 The last time I ran Freihofer's Run for Women competitively was in 1999 and 2000, prior to becoming a mom.  Now I am involved in the running scene for different reasons- my kids are involved in the sport.

I was thrilled when my daughter came home from track practice informing me that her track team would be participating in the Freihofer's Run for Women.  Life is coming full circle...

It is an unbelievable experience to see my own children developing a passion for a sport that is so dear to my heart. My son, Ryan is a freshman and my daughter, Emily is in 7th grade. They both run for the Saratoga Springs cross country and track teams. I hope that I can continue to be a role model for them, and join them in their running experiences when possible.

Moving up to the Master’s Division signifies another chapter in my life, and I feel very blessed to be able to continue running on a competitive level. Freihofer’s Run for Women is such a special race and one that I hope to continue to participate in for years to come.

Indeed life has come full circle for me and I am excited to see what the future holds! 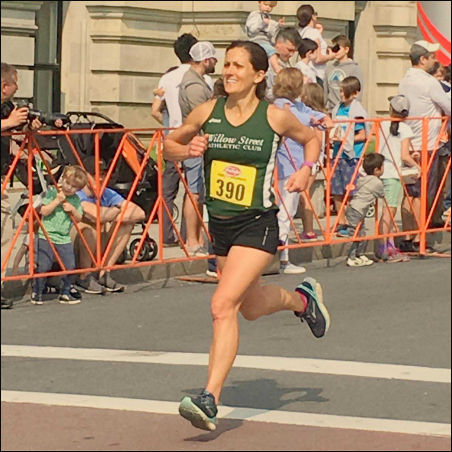 When I experienced my first Freihofer's Run for Women race 8 years ago, I did not toe the line. I was fortunate enough to ride in the back of the press truck as all the elite runners charged ahead hoping to cross the finish line first. My coach and friend, Tom Dalton, has been driving the press truck for 30 years and invited me to join. It was an experience of a lifetime and to top it off, I got to meet Joan Beniot - the first-ever women's Olympic Games marathon champion, winner of the Gold medal at the 1984 Summer Olympics in Los Angeles.

This year was my 7th consecutive year running Freihofer’s. It wasn’t a PR for me but I did have other memorable moments. It was a beautiful morning as I warmed up with some of my teammates. I used the porta potties, ran into Tom who gave me a few race tips, then went to the starting line. I was up front with the elite runners - some very young girls in pink, and one other woman, Denise Herman, who has been running the race for 41 years (never missed a year - pretty impressive!). I congratulated her and made sure my watch was ready to go! The gun went off and we all took off running up the hill. My splits were 6:53, 7:03 (the park has always been mentally challenging for me), 6:36 with a 21:18 finish and 79th overall women. The finish has always been a challenge, but this year I got inspiration from another runner who ran by me by with a shoe in one hand. I saw her in the park earlier and noticed her shoe untied!

It’s always a good feeling when you cross the finish line at any race, but this one in particular. The pain was over and it was time to cool down, have gratitude for another hard effort and enjoy the running community. I found out later that one of the girls in pink is 9 years old and ran a 20:34. You can find inspiration at any age! To top it off, the Willow Street Women had a great showing and placed 1, 2, 5, and 6. 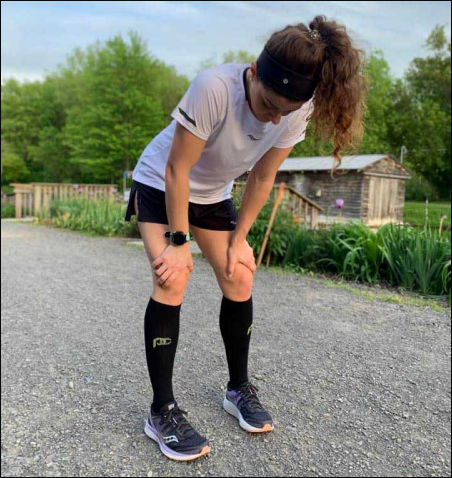 This year I completed my 3rd Freihofer's Run for Women 5K on the Albany Running Exchange Team. I ran my first ever Freihofer's in 2017, and what initially intrigued me the most about the race was the fact that professional runners made their way to Albany just for this race. After completion of the race I realized there was so much more about Freihofer's that made it THE RACE to run. Being surrounded by thousands of amazing women was breathtaking.  The amount of energy that embodies the Freihofer's Run for Women 5K is unlike anything else. I honestly had never been so proud to be a part of an event until I ran Freihofer's for the first time.  It was amazing. The encouragement, the motivation, all the cheering along the entire course is unbeatable. That was what kept me from dropping out of 2018's Freihofer's race even though I was suffering through an awful foot injury.

This year I laced up my racing flats to once again run through downtown Albany and celebrate the Freihofer's Run for Women. I was quite intimidated considering I hadn't raced a 5K in over a year. Although it wasn't my most comfortable race, I was able to cross the finish line in 21:27 which really impressed me. The overall experience of this year's Freihofer's was as great as before. I look forward to returning next year and being able to compete among some of the top women in Albany. 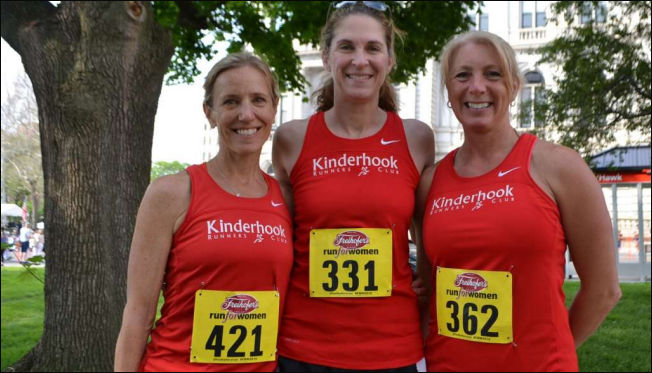 I signed up for Freihofer's last minute on Friday night before the race. Mainly because of my kids schedule, but fortunately it cleared up to allow me to run.

I hesitated at first because I haven't trained for a 5k, I'm a long distance runner. Can I run the distance, yes. But can I run it with a time that I will be happy with, maybe? I had to pick up something at a local store Friday afternoon where someone who noticed my running gear asked if I would be in FRW tomorrow. I made my decision right there. Freihofer’s is such a premiere event in the Capital Region, how could I not run it? Women of all abilities: elite, new runners, and walkers come out for it. Regardless of who wins or what the clock says, Freihofers is such a special race that all women should experience it. 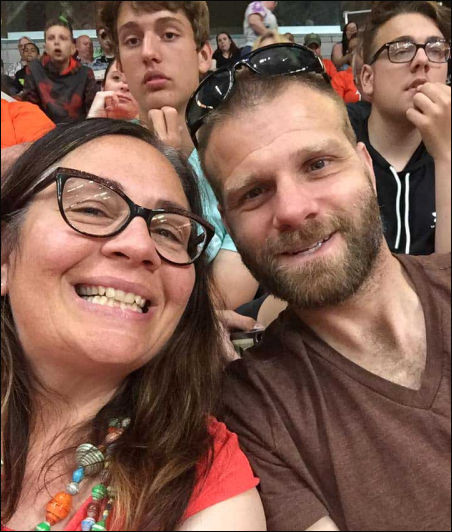 My husband and I enjoyed watching the Freihofer’s Run for Women 5k on June 1 and cheering on as many women as we could. My heart always sinks a little when I see a walker or runner towards the back dismiss my cheers, as if they’re not deserving of the attention because of their speed or fitness level. Over the course of my running lifetime, and especially since running a marathon this past May, I’ve been thinking a lot about how to draw more positive attention to the back of the pack warriors.
We are so hard on ourselves in every other facet of our lives. “I wish I was thinner,” “I should’ve applied for that promotion,” “Why can’t I be more patient with my kids?” Every day we’re fighting against self-doubts, the “should haves” and criticism. As I say to the amazing athletes I coach, running (or any exercise) is the time to be good to ourselves. It’s our time to shine, be proud and be confident in the fact that we are exactly where we need to be at that moment.
So remember: even if you’re the last runner, smile, shine and bask in those cheers. You’ve earned them!