Dodge the Deer at 17 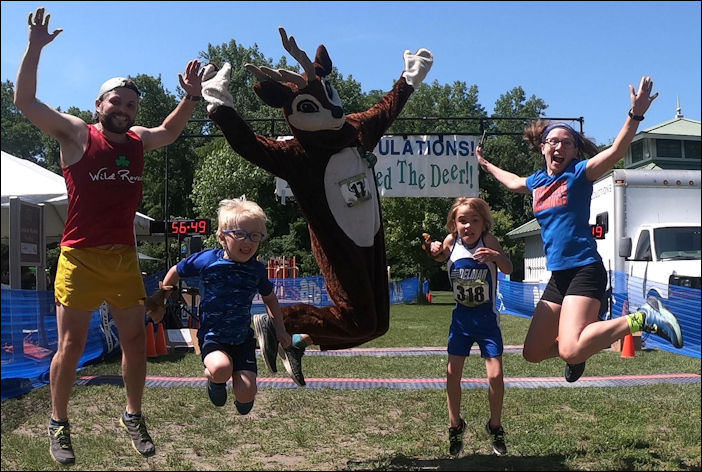 Whew, the weather looks great! Those words are music to a race director’s ears. This year marked the 17th Annual Dodge the Deer 5K & Kids Races and it was a beautiful day. When the event was created in 2003, its date was based on the U Albany schedule (the ARE was all college students at the time) along with not wanting snow on the trail. (Although in 2007, it lightly snowed during the event - including 1 finisher in snowshoes.) The need to place it in mid-April continued for many years, as I went on to become a high school teacher and preferred to place it at the end of April break so that I had the week-off from school preceding race day. Along the way, we had some rough weather years, including the snow year mentioned above, along with one year of cold downpours – and also a few years of truly frigid conditions, including last year, when it never got out of the 30s on race day. 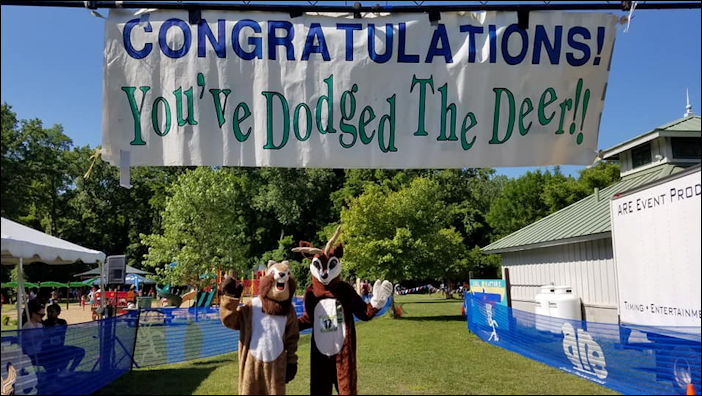 Dodge is the name of our deer, for whom at his eponymous event you must dodge. Yes, puns galore. The event is all about family - in fact, at the 2004 race, Dodge married the love of his life, Chase the Chipmunk. With that said, in 2005, we introduced Bully the Bear as an overly zealous, and mildly ill-mannered character intent on stealing Dodge’s paramour. The 2005 race concluded with a musical in which Bully failed at stealing Chase’s love - but ultimately became friends with Dodge, restoring harmony into the shaded confines of the wilderness.

In the time since, the three characters continue to return each year (and occasionally make cameos at other events) to encourage the participants and motivate the young children who take on the cutest race at the event, the Bully the Bear 200 Meter Sprint - which often features 1 year olds who only recently began taking their first steps. Within a few years they graduate to the Chase the Chipmunk 1 Mile before taking on Dodge in the 5K.

Following last year’s freezing conditions, combined with our desire to truly make for a fun day that people want to be outside in we were aiming to change the date. The creation of our inaugural Helderberg to Hudson Half Marathon sealed the deal as that event was scheduled for April 13 and we did not want to be too close to it. As such, we finally took the plunge, going with Sunday, June 23.

For most ARE events, we setup at least the day before, if not a couple of days before. Setup includes marking the course along with getting all of the start/finish area equipment in place. Depending upon the event, this takes anywhere from a few hours to an entire day. On Sat, June 22, Paul Mueller, John Kinnicutt and I met at 1PM at Schodack Island State Park to setup. It was beautiful out! The park was filled. The trees had leaves. The rabbits were everywhere. It was 40 degrees warmer than some 14 months before - the last time we had setup for the event was on a chilly, pre-bloom day.

A few days prior to the 2019 event, I checked the weekend forecast for what was probably the 10th time that week, and took solace in figuring that at this point it may very well be accurate – in the best of ways. After some Friday morning rain, it was looking perfect, with nothing but sunshine for the following 3 days, and warm temperatures to boot. Exactly the kind of conditions we’ve always wanted for the event - and hadn’t had since 2005, when yes, it was in the low 80s on April 10. 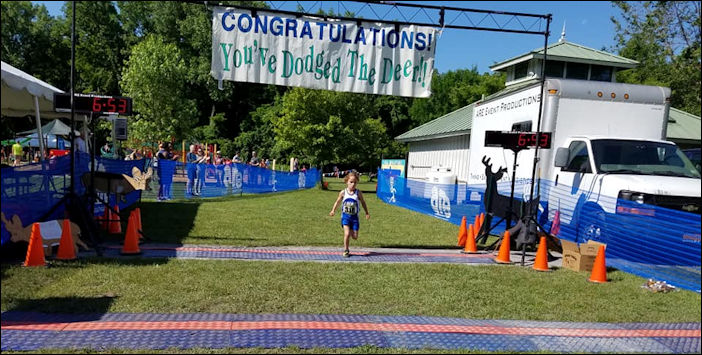 On race morning, I found myself sweating during final setup, while only wearing shorts and a t-shirt. A few of us who have worked the event for at least the past few years laughed at not needing multiple layers and gloves. Doing data entry of new registration went faster than ever as those on the computer didn’t have to contend with frozen fingers. 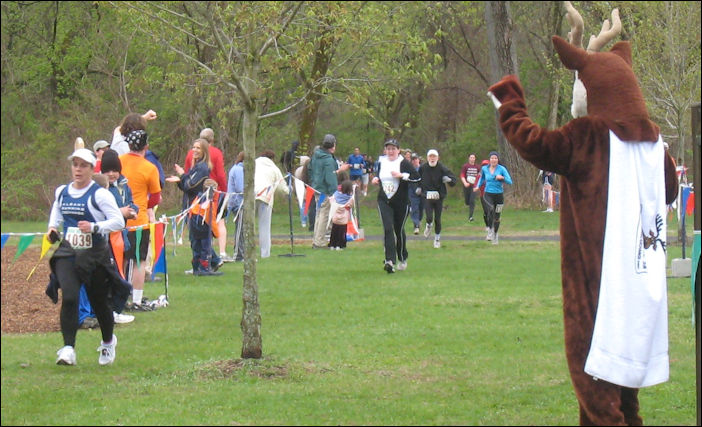 C 2012 when the weather was cold. The tree has now grown considerably since but Dodge is still the same irrepressible character.

On the whole, it was a beautiful day, which made for such a positive experience for us and we surely hope all attending. Mike Langevin, Tom Mack, and Kim Scott extended their streaks to 17 years of finishing the 5K with Kim also being half of the winning Mr. & Mrs. Dodge team. The kids’ races were packed, and each child was given their own deer toy at the finish line. For the first time ever, one of the top 3 finishers in the 5K was born the same year we created the event - which definitely put new perspective on how long we’ve been holding the event. 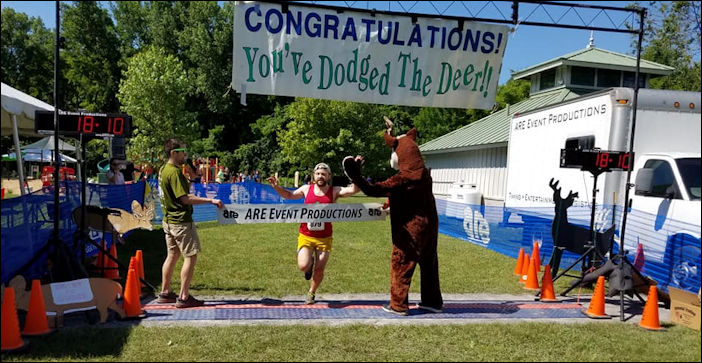 The ARE started in the fall of 2002. Chris Chromczak and I conceived of the idea of holding this race while on a run in the Pine Bush Preserve a few weeks later. It was the first race ARE ever held, debuting on April 13 of 2003. Some 16 years later, on a beautiful day at the start of summer, Chris crossed the finish line first. His wife, Emily - who he met in the ARE - also participated, along with both of their elementary age children. Paul Mueller, who also helped produced the race back in 2003, was back again, not only helping us put on the race, but with his 3 year old daughter in tow, helping too. And countless others bringing out their family and friends to be part of the positive and welcoming spirit of Dodge the Deer.

Since that first Dodge the Deer, the ARE has grown and blossomed into so much more than I ever could have imagined. The continuation of this race serves as an annual reminder of where we started and how, above all else, it’s always been about making it fun. About seeing people smile while doing something healthy. And it’s made even better on a nice, sunny day. 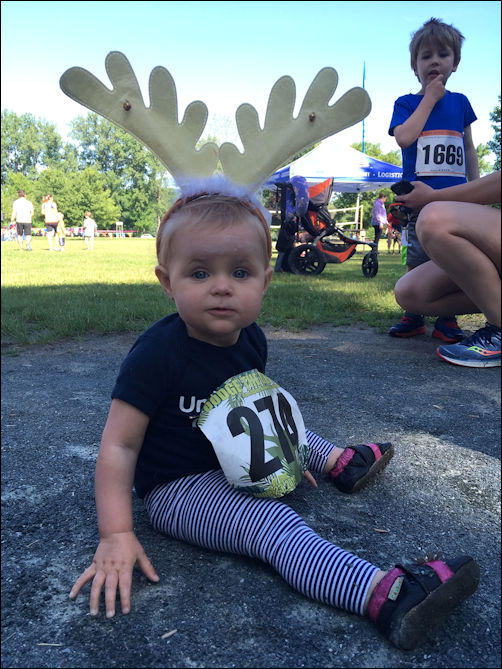