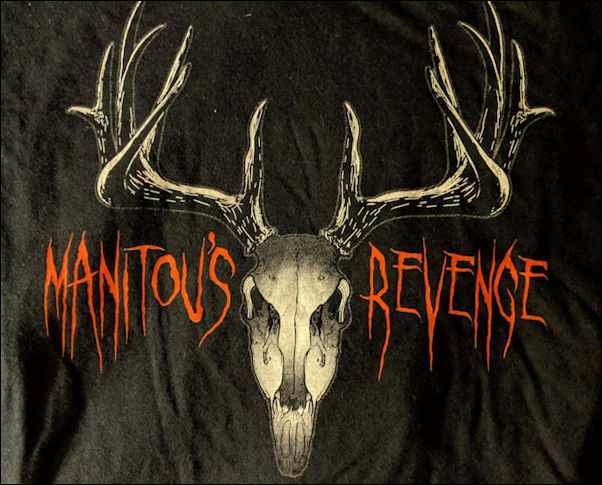 For the third year in a row, I took part in an epic adventure in the Catskills that takes place on the Saturday closest to the longest day of the year: Manitou’s Revenge Ultramarathon. The race director describes it like this on the webpage:

Manitou’s Revenge is a 54 mile ultramarathon through the Catskills beginning in Windham, N.Y. on the northern Black Dome Trail and then mostly following the Long Path from Acra Point all the way to downtown Phoenicia, N.Y.

THIS IS NOT LIKE ANY OTHER ULTRA YOU’VE RUN BEFORE!

This is a grueling, gnarly, nasty course with approximately 15,000 ft. of climbing, much of it rocky and precipitous.  To be sure, there are some runnable sections, but you will more often find yourself hiking uphill or down, sometimes hand over hand.  Expect this course to take you much longer than your average 50 miler. That’s why we are allowing 24 hrs. to complete this monster. Because of its remote and difficult nature, there will of necessity be a limited number of aid stations, only 9, and runners should be prepared to spend up to 3 or 4 hrs. between aid stations. You will have to be reasonably self-sufficient. To make matters worse, the course gets progressively more difficult as you go along! And to top it all off, the average runner will have to tackle this hardest terrain in the dark.

When I tell folks about the race and they have not heard of it, I always ask if they have heard of the Escarpment Trail Run? If they have, I explain that the Escarpment is the easy part of Manitou’s. That is not just tough talk, it is the truth. The first 30 miles usually takes me about 7 hours, and the last 24 miles always takes me longer as it traverses the toughest part Devil's path  (4 Catskill high peaks over 12 miles, the entire Devil’s path is 24.6 miles and is rated one the toughest hiking trails in the East)!  It is considered by Backpacker Magazine to be one of the hardest hikes in the country. “Many people backpack it in two or three days, but it can be done in a single, grueling day by those in good shape.”

Each year I have run it, I have tried to beat the sunset and avoid the reflective vest for the last mile on the road. So, far I have failed. In 2017 I ran it in 16:34 finishing in the dark. In 2018 I finished about 10 minutes faster in 16:23. Close, but still needed the headlamp and vest. This year was an epic race against the sun.

Tom O’Grady has been coaching me this year and volunteered to pace me for the last 24 miles through the Devil’s Path. Tom and I stayed in Phoenicia the night before the race. Ultramarathons require lots of sacrifice, but the biggest one is giving up sleep from time to time. Since this is a point-to-point race, the bus to the start leaves the finish line at 3:30 am sharp so that runners can begin as soon as the sun rises.  After I had a good 4 hours of sleep, Tom drove me to the bus take departure lot at 3:15 am.

The runners are grouped into waves that start 5 minutes apart. I was slated for wave three, which turned out to be the elite women’s wave. There were other guys but I was with all the fast trail ladies. Our wave started around 5:10 am. The first three miles of the race are on a nice country road, which likely only sees this volume of people on it once a year. It is a great way to ease into the race. Lots of small talk and nervous energy as we all head for the woods where the race really starts. The entrance to the woods is marked by a small water only aid station.

Once the race enters the woods it starts a gentle climb (2,000 ft over the next 3 miles) with enough roots and rocks to put an end to the snappy road run pace. The day’s endless question of should I run or should I walk begins. If I run there will be trouble, if I walk it will be double, or something along those lines. People stumble here and there as they get there trail legs on. A few miles in and the start of the race and the smooth road are a distant memory. The single track endlessly meanders up and down.

Debbie who ran in 2017 as a training run for Hardrock 100 and her husband Scott where both racing. Turns out Debbie likes the downhills as much as I do, and we both cruised down the escarpment’s many runnable downhills passing several runners. About halfway to North/South lake is a small aid station with the first of Manitou’s 54 mile buffet (appetizer station??). We are greeted by happy volunteers with PB&J, cookies, chips, candy, and drinks, too early in the race for the flat coke, but I am tempted.

Although most of the trail is deep in the woods, there are occasional outbursts of scenic wonder with views of green tree covered hills and valleys. One notable trail marker is the crashed private plane at the top of one of the climbs. Once you see the plane you know you are making progress. (The pilot was John T Grace flying a Piper PA-28 (#N1316T). He crashed on May 25th 1983 at 9:40 AM. He was killed in the crash. He left Poughkeepsie at 9:12 AM and was flying to Watertown, NY. He had a revoked student pilot's license. He didn't file a flight plan.) http://www.catskillmountaineer.com/NSL-stoppel.html 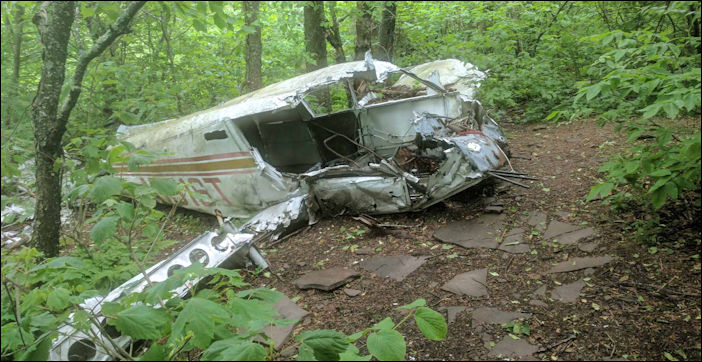 In prior years, I always stopped to take a few photos, but not this year, I was all business, so no pictures to share from me. At the end of the Escarpment trail at about 15.5 miles is the north/south lake aid station where the second course of the buffet is served. They had watermelon, pineapple, pb&j, boiled potatoes and salt, chips. Someone filled the water bladder in my pack while I stuffed in as much food as I could. I really didn’t want to leave, but as other runners started showing up, I knew it was time to go.

The course climbs another 300 ft. in the next 1.4 miles and then starts the most glorious 3 mile downhill in the whole race. A little rocky but totally runnable switch backs for 3 whole miles. Letting gravity lead the way my pace was the same as the first road miles. Although my right quad gave me a bit a grief for some reason and slowed me down a bit. At the bottom of the hill is another aid station with even more yummy food, 3rd breakfast maybe. Once again I ate as much as I could, but did not want to wait around too long. The course takes a short climb up a road and turns left into a short stretch of abandoned road. Then it is time to pay for all that downhill. At the aid station one of the runners said that was almost too much downhill. I reminded him of that as we walked our way up the next 7 miles of climbing.

All that climbing leads into the Kaaterskill Falls Trail, which has a few flat looking areas that are notoriously covered in roots, rocks, and extra mud this year. This is one of those points where the Manitou wins. I caught myself thinking why not run 50K races instead of this. What is the point? Relentless forward progress prevailed. Just before the next big downhill into the Platte Clove aid station Alana caught up to me. I honestly was happy to talk to someone I knew for a while even if I was getting past. We slogged through the last bit of mud until the rocky downhill started. My quad slowed me down a tad and Alana disappeared into the future. If you look at a race like a timeline, when you get past people are moving into your future position. I made OK time on the downhill, but the Kaaterskill mud and roots had taken their toll.

I arrived at the Platte Clove aid station to pick up my pacer Tom O’Grady. Once again I arrived beat up and moving slowly. I did arrive about 6 minutes faster than the year before, so I guess that's something. After another mini-feast including the smoothy from my dropbag, yummy vegan quesadillas, flat coke, fresh pineapple and watermelon, Tom coaxed me back onto the trail. Awaiting us was Devil’s Path, which is considered by many as one of the most challenging hiking trails in the country.

The next climbs are the monstrous straight up Golem climbing. At the next aid station Tom’s wife and kids had hiked in to cheer us on! What a great surprise! They said I looked good and all the guys ahead of me were half my age. I don’t think I could have looked that good… But it was awesome to see them. Once again the food was great, warm veggie broth and more coke.

At some point Tom and I found ourselves running with Debbie again. She was leading the way at what seemed like a pretty fast pace. I never look at my pace on trail races because I have learned there is nothing but disappointment to be had there.  Still, I thought we were moving well. I had a 6th or 7th wind maybe. Another runner joined the train right in front of me after stopping on the trail ahead of us. He turned out to have an awesome motivational speech for me. He said, “The sandal guy can keep up this pace?” I thought about this and announced, “I think I can do better than keep up, can we pass?” And pass we did, I think I had an exceptional next mile. Regardless I did not see either Deb or Sandal comment guy until after the finish line.

The race with the sun was starting to be a nail biter as the shadows grew longer and the forest grew darker.

At the last aid station Tony Fletcher, whom I met at my first Manitou as a fellow runner, was manning the station, which we had been told would only have water. Far from just water, the station had some home made chocolate coconut fudge that both Tom and I wished we had taken more of. I had never reached that aid station without a shining headlamp. I was feeling good about beating the sun!

The last downhill is runnable but rocky. My quad only allowed for 13 minute miles, but it was pretty easy going. Once on the road, I was able to muster a 9:15 pace for the last mile. I had completed Manitou’s Revenge in the daylight and 1 hour and 6 minutes faster than my previous best time on the course! Another great race with pacer Tom.  Click here for Tom’s side of the story. 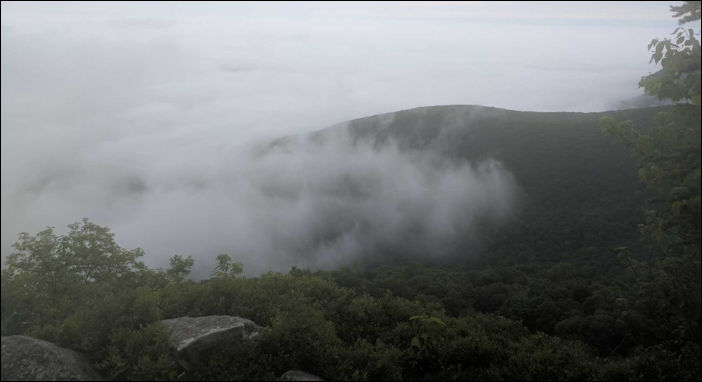 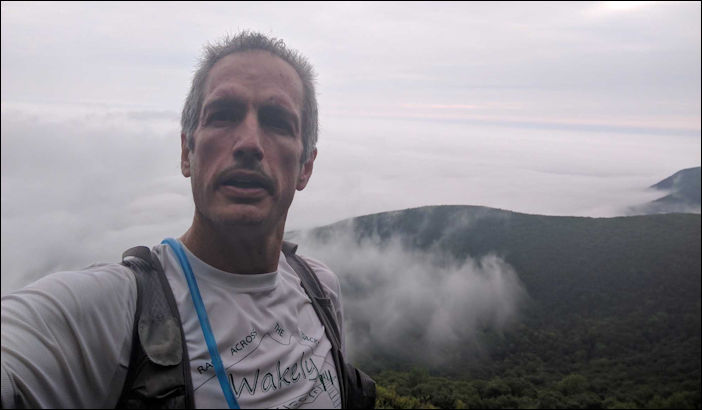 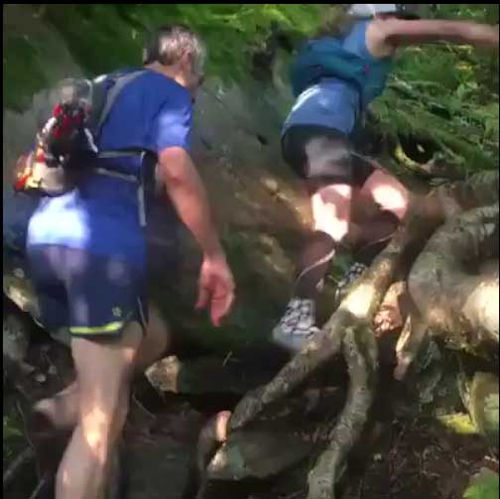 2019 climb on the escarpment

Of course it didn’t happen if it’s not on Strava (not only did I beat the sun, but I beat my watch battery which Tom certainly would not have let me take time out to charge had it died):

Final thoughts: If you are up to the task, this is an awesome race. The food on the course and the volunteers at the aid stations are the best I have seen at any race. The course is well marked and ridiculously hard in a great way. 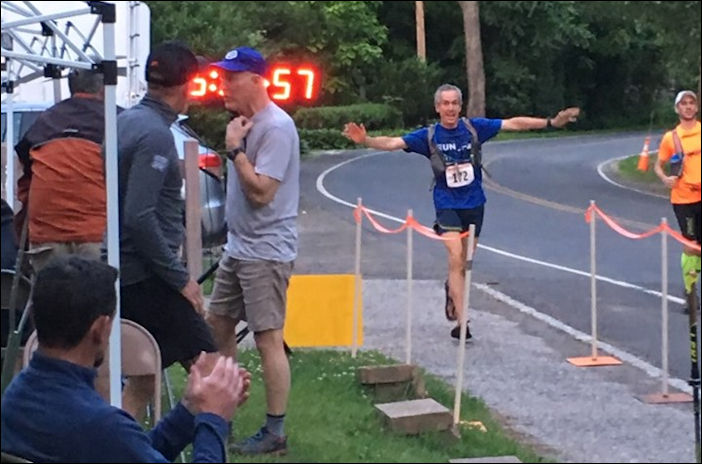