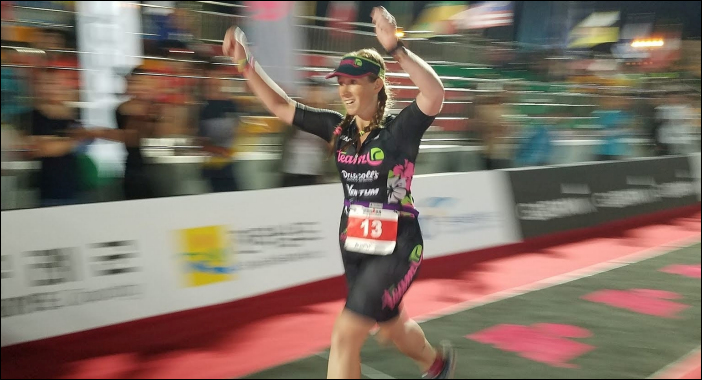 Last year I decided I wanted to do two Ironman races in 2018. Ironman Korea’s course was appealing, flights were under $500 from New York City to Seoul, and the race uniquely provided a lot of logistical support: a long list of hotel options, shuttles from the hotel to the race venues, and an airport shuttle. It felt like a great opportunity and I signed up on New Year’s Eve.

There was a lot to consider: packing a bike, traveling with all my race gear, food, jet lag, and travel logistics. My bike was packed in a hard case by Steieners and I managed to carry on everything else I needed to race. The trip to Seoul was about 17 hours of travel, and then we had a four hour bus ride to Gurye, Korea. Luckily my bike and gear made it safely, and my husband Jeremy reassembled my bike for me. 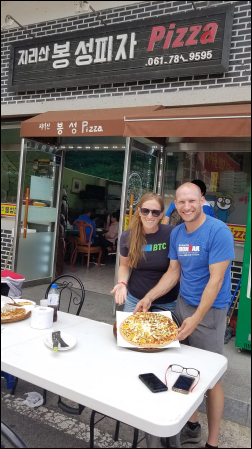 Gurye is a rural, mountainous area with a lot of farms. As a result, finding food was a challenge. We ate breakfast at the hotel, and I was mainly eating plain rice and eggs. By some miracle we found a pizza place down the road from us. The restaurant was packed with athletes from all over the world. I was grateful to have my standard pre-race meal, even if there mysteriously was corn between the cheese and sauce. I handled the rest of my meals with food I had packed. Overall I felt like I handled the food situation as best as I could, but I don’t think my body was properly fueled for the race.

Race morning arrived and I was relatively calm. There were a lot of unknowns for me. I was unfamiliar with the course, was unsure how my body would respond to the jet lag, and didn’t know if the language barrier would be an issue. I jumped in the water at the swim start, ready to let routine take over. The swim was very foggy and more aggressive than any swim I’d experienced in the US. There was a lot of leg grabbing which let to some calf cramps for me, but I guess my desperation to just get through it helped. I ended up with a PR for both the 1.2 and 2.4 mile distance (thanks Excel Aquatics!).

Transition was pretty standard and it was onto the bike. The course started with an extended climb, and I was struggling to get my heart rate down. I tried to take it easy and observe the surrounding area. We passed a number of rice paddies and the occasional spectator. The town was quiet though, probably because the majority of them were volunteering with the race! It was amazing how much support we had. 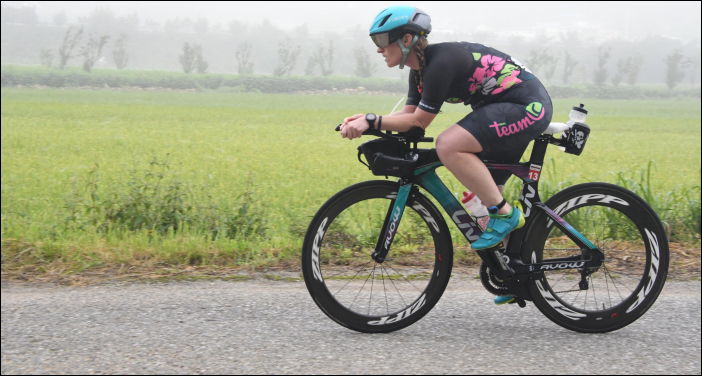 The bike came with some unique challenges. One was that the roads were loaded with speed bumps. I also started to notice I was feeling drowsy and desperately wanted to sleep. This made sense, as it was about 10 PM in the US. I rallied a bit after grabbing one of my caffeinated bottles of nutrition and seeing Jeremy. Overall on-course support was excellent. Instead of handing out single-use plastic bottles, they were distributing water and Gatorade in reusable water bottles. I had learned the word “water” in Korean which proved helpful. The only issue is that they were only half filling the bottles, which came back to bite me later in the race. Another thing that was very different was special needs- people were sitting down and relaxing mid-race!

I hit a stroke of bad luck on the bike when I dropped one of my bottles of nutrition which held about 250 calories and another dose of caffeine. Between being unfamiliar with the course’s aid stations, the half-full bottles, and the heat that had reached about 90 degrees, I found myself bonking hard. I ran out of water on an exposed 13 mile stretch of highway and struggled. In the end, I told myself I didn’t fly all the way to Korea to let a bad bonk stop me and slowly cruised into the end, still hitting a 30 minute bike PR (thanks Andy Ruiz!).

The run was a three loop affair. The course had very little shade, but was remarkably beautiful. We were surrounded by mountains and the course eventually ran along a river. I never fully bounced back from my bonk, but it gave me plenty of time to observe the scenery as well as the odd things happening on course. One competitor had stopped on-course to have a picnic with his family! 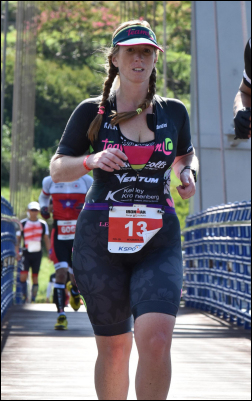 I wrapped up my last loop and headed to the finish line in the local stadium. While I had missed out on my goal time, I was thrilled to see an Ironman PR after a tough day. Jeremy (who had been an amazing spectator) had befriended the announcer and I got lots of extra support as I crossed the finish line. I received a medal, towel, shirt, and finisher certificate. I was also treated to an intense massage, which I credit with my ability to tour South Korea for the rest of the week.

Despite its challenges, this was my favorite Ironman yet because it was such a different experience. It was also amazing to take a vacation afterwards to South Korea and Beijing. While I had a lot of fun, I would note that racing an Ironman on such a big time difference was not ideal. More time before the race may have helped, but I preferred to take my vacation after the race. I absolutely recommend trying an international race, but I don’t know that I’d travel quite as far next time. I’m so grateful I had the opportunity for this adventure! 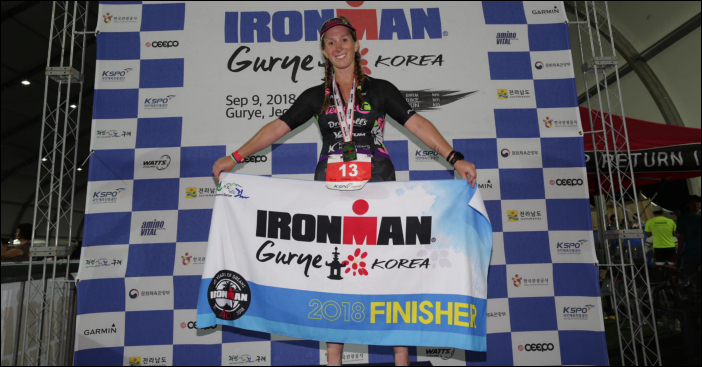